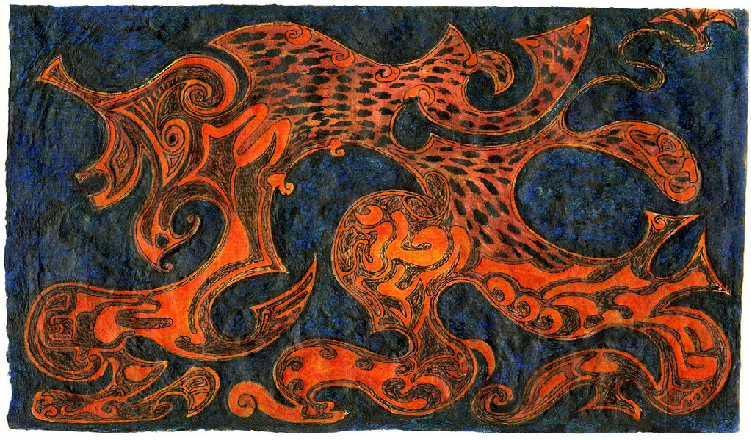 In Chimeras of Form: Modernist Internationalism Beyond Europe, 1914–2016, Aarthi Vadde examines how world modernist writers experiment with literary form to question the stakes of international political community in the contexts of colonialism, mass migration, and globalization (1). The “chimera” recalls the mythical, monstrous creatures grafted from disparate bodies as well as the “artificial,” even synthetic combining of organic elements in botany and genetics (2). For Vadde, “chimeras of form” refer to the numerous ways modernist authors from around the world and writing over the course of the last century—from Rabindranath Tagore (India), James Joyce (Ireland/Europe), Claude McKay (Jamaica/US), and George Lamming (Barbados/UK/US) to Michael Ondaatje (Sri Lanka/Canada) and Zadie Smith (UK)—deliberately flaunt what may initially seem like grotesque, aberrant, or disavowed forms of aesthetic representation. They inhabit the contradictions connecting “the real and the unreal,” “trivial fancies and heroic vision,” “amputation and incompletion,” and otherwise “underappreciated forms of creativity” (8). Their varied commitment to modernist innovation also carries a political edge. In challenging precepts of aesthetic wholeness, formal unity, and self-sustained autonomy, they redraw the “limits of imaginable community,” thereby “testing the categories by which social life is rendered coherent and speakable” (2). The chimeras of form distinguishing modernist internationalism, Vadde maintains, “reveal the conflict between imagining community as a stable, idealized entity—such as, for example, the ‘future heaven’ of the postcolonial nation—and capturing nations, colonies, and continents’ very real immersion in transitional and transnational regimes of power” (6). Her sustained and unapologetic attention to aesthetics, then, becomes an avenue for analyzing the conflicts and possibilities of political forms of internationalism.

Chimeras carry associations of artificiality and illusion, of excess and disfigurement, of distortion and illegibility. We can think for instance of the fabled manticore, which appears in Salman Rushdie’s The Satanic Verses (1988); or of the fantasy of global social justice in the international political theory of E.H. Carr’s The Twenty Years’ Crisis (1939). In Vadde’s eyes, chimeras in art and politics alike become crucial for interpreting “the artificiality and contingency of communal forms, and for making them more susceptible to rethinking within an incompletely knowable global landscape” (7). Drawing on Bruno Latour’s Reassembling the Social (2005), Vadde claims that the “chimeras of form that populate this book [. . .] learn from, but also challenge, the powerful legacy of organicism over literary and communal theories of form, and, more importantly, present modernist grotesques of artful and artificial life as alternatives to it” (29). The chimeras of modernist internationalism, in turn, produce new ways of thinking and “redescribing” the artificial, hybrid composition of cosmopolitical community and social life.

Vadde’s sweeping comparative method looks resolutely beyond strictly national frames for studying modernist cultural production. Instead, she extends a now significant body of scholarship in the new modernist studies and global modernisms. (This book is published with the “Modernist Latitudes” series, edited by Jessica Berman and Paul Saint-Amour.) Concerning the politics of modernist international aesthetics, Vadde is careful to emphasize that these authors and texts refuse to offer a way out of intractable political contradictions and social realities. Nevertheless, she rightfully credits aesthetic inventiveness with a capacity to produce more refined ways of thinking, writing, and speaking to international matters, such as the fate of national autonomy and international solidarity, diasporic migration and citizenship, the messy politics of human rights interventions, and the gross disparities of global capitalism (3). Taken together, modernist authors writing in a wide range of historical, political, and cultural contexts—located either at the peripheries of or beyond Europe—collectively “contribute to the political imagination of internationalism” (8).

Over the course of her study, Vadde focuses on particular “grotesque” formal elements through which modernist writing questions the limits of political power, transnational migration, and the potentialities of forging supranational solidarities (29). For instance, the opening chapter examines Tagore’s “autotranslations” in his English-language collections, Nationalism (1917) and The Home and the World (1919). The Nobel Laureate’s self-translations into English have often been perceived as “degraded” modernist art works, both in lacking precepts of originality and in falling short of the beauty of “their Bengali originals” (30). Tagore, however, handled translation as a way of “mediating uncommonness” and “broaching the topic of illegibility” as the means through which to challenge myths of national purity and to construct “anti-imperial internationalism” (38–39). Tagore’s emphasis on translation’s diffusion of difference recasts postcolonial nationhood as internally divided and in constant dialogue with audiences “within the wider world” (73). In her subsequent chapters, Vadde examines Joyce’s “alternating asymmetries”—or his tendency to criticize inflated claims to national or international solidarity by highlighting self-deceptions and nagging material exclusions—in Dubliners (1914) and the “Cyclops” episode of Ulysses (1922) before turning to the “deformed plots” of Claude McKay and George Lamming. The “plotless,” peripatetic narratives of Banjo: A Story Without a Plot (1929) and The Emigrants (1954), in different but related ways, mediate experiences of racial exclusion, displacement, and deterritorialization for West Indian migrants in the US and UK respectively, even as their plotless narratives point to alternative models of citizenship premised in “transience,” one that already prefigures Étienne Balibar’s “citizenship of the roads,” potentially open to anyone (147).

In chapters four and five, Vadde extends the project of modernist internationalism, further expanding its geographic scope and dilating its historical trajectory up through the late twentieth and early twenty-first century by focusing on Sri Lankan-born and Canadian-based Michael Ondaatje and Black British author, Zadie Smith. In The Collected Works of Billy the Kid (1970) and Anil’s Ghost (2000), Ondaatje uses what Vadde calls “archival legends”—intertwining an attention to “collection” and “artefactual remains” in the supposedly self-contained “historical record” with an emphasis on the legend’s conventions of the fantastic and the “unreal”—as his way of contending with the limits of collective cultural memory at national and international scales of political attachment and social justice (180). By comparison, Zadie Smith deploys “root canals”—that is, a recurrent emphasis on parts and wholes, divisions and seriality, totality and unboundedness—to provide a causal account for the transnational economic, political, and social forces that contribute to mass migration, the desire for upward mobility and citizenship, and gentrification in northwest London (33). In the process, Smith conducts a “systemic critique” of uneven development and social inequality in London and beyond—even as she implicates her own cultural production with reinscribing the very injustices her root canals seek to diagnose, if not extract (186). Finally, given that Vadde writes in a historical moment that has seen the largest movement of peoples due to forced displacement since World War II, she aptly concludes Chimeras of Form with a study of the migrant, racialized subject in Migritude (2010) by Kenyan author Shailja Patel. Migritude is a one-woman performance piece that was subsequently “re-mediated” into book form. The remediated work of Migritude further reflects upon the aesthetic work of mediation in the social and political domains. “The re-mediated work,” Vadde concludes, “negotiates between the empirical description of migration situations (including its own) and the unempirical sentiments that compose a migrant attitude, between external reference to history and current events and internal reference to structure, style, and its own processes of production and reception” (230).

Vadde has produced a significant—and elegantly written—work of literary criticism that, true to form, chimerically yokes together otherwise disparate bodies of scholarship into new and exciting combinations: global modernisms, postcolonial studies, transnational literary studies, cosmopolitan theory, and ongoing debates over the politics of aesthetic forms, more broadly. Vadde describes the mood of her project as “pessoptimist”: “[a]n ambivalent mixture of innocence and experience, hope and doubt, pessoptimism invites some of the negativity that utopianism usually keeps at bay” (21). The chimeras of modernist internationalism retain a cold, hard acceptance of persistent historical realities of exclusion and inequality even as they press the limits “of possibility of social transformation” (21). Ultimately, Vadde compels her readers to see anew the layers of mediation composing any formation of international politics as a “preliminary” step towards apprehending—and potentially transforming—the economic forces, political conflicts, and social contradictions at play in the making and unmaking of modernity as they arise through literature’s work of “global imagination” (230–31).

Omaar Hena is an Associate Professor of English at Wake Forest University, where he teaches courses in modern and contemporary poetry in English, postcolonial literature, and global literary studies. He received his Ph.D. from University of Virginia in 2008 and held a postdoctoral fellowship at Cornell between 2008-09. His publications have appeared in Contemporary Literature, Minnesota Review, Ariel, The Princeton Encyclopedia of Poetry and Poetics, A Companion to Modernist Poetry, The Oxford Handbook of Contemporary British and Irish Poetry, The Cambridge Companion to Postcolonial Poetry, and Post-Ireland? Essays on Contemporary Irish Poetry. In 2015, his book, Global Anglophone Poetry: Literary Form and Social Critique in Walcott, Muldoon, de Kok and Nagra, was published with Palgrave’s series in Modern and Contemporary Poetry and Poetics. He is currently working on a new project on the intersection of race and publics in contemporary Black and Minority Ethnic British poetry.