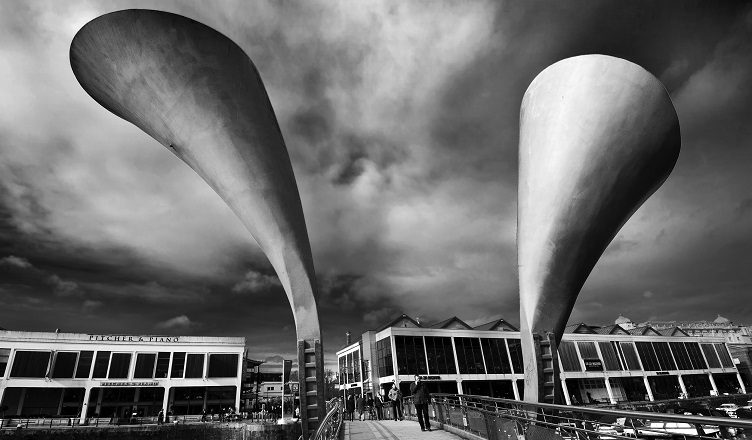 In the final chapter of Living Cargo: How Black Britain Performs Its Past, Steven Blevins turns his attention to the city of Bristol, examining the intersection of the city’s history of rioting with its prominent role in the slave trade. Blevins’s analysis focuses on how these histories have been problematically co-opted in the urban planning of the city, most notably in contemporary regeneration projects that often seek to perform the dual function of redevelopment and commemoration. In the case of Pero’s Bridge—a pedestrian walkway designed as part of the Bristol Harbour redevelopment and named after an enslaved African brought to Bristol by plantation owner John Pinney—the bridge acts as “a commercially functional memorial to the history of the slave trade” (258), and signals the continuing tensions around Bristol’s attempt to reinvent itself as a global city. Exploring how city planners and private developers in Bristol have instrumentalized difference, creativity, and diversity for commercial gain, Blevins links the recent social reengineering and geographic remapping of local (black) communities that these developments have occasioned with the “historical systems of colonial exchange that created human bio-cargo” that “remain implicated in the economic and social transactions of everyday life in the postcolonial city” (289).

As a relatively new resident of Bristol, I found that Blevins’s account resonates strongly with my understanding and experience of the city, and offers a much needed cultural history of the way that urban planning, commercial interests, public commemoration, and the history of slavery come into conflict with one another. Recent debates (in February 2017) over the renaming and relaunch of Colston Hall—a historic performance venue named after Edward Colston, who made much of his wealth in the slave trade—demonstrate that these tensions are more present than ever. The city’s planners and creative executives might well benefit from reading Blevins’s account of how the city’s debt to enslaved Africans cannot be easily elided, particularly in the wake of the backlash that has greeted the recent announcement that the Hall will be renamed.

Yet it is not the planners whom Blevins has in his sights in this book, but rather the collective empowerment that might be achieved through the creation of new spaces of critique, spaces created by contemporary artists whose work aims to intervene in the public history of postcolonial Britain. Living Cargo examines an array of black British literary, performative, and visual texts that exemplify what Blevins identifies as a turn to history and historical narration in contemporary black British cultural production (10). Blevins contends that central to the work of prominent black British artists and writers is an engagement with, and redefinition of, the archive; an attempt to remake black public history through critically reflexive works that “unhouse” history by reframing the archive as emergent, as a site to “reactivate historical traces” that are otherwise “housed” (8). In so doing, black British writers and artists engage in what Blevins terms “critical redressive historiography” (16), a mode that foregrounds the biopolitics of slavery, and that reoccupies and recuperates the archive by paying attention to scattered archival remains as well as to the body as “artifact and affect of history” (8).

Each chapter of the book approaches this historical, archival turn from a different perspective. Chapter one is concerned with “how the West formulates notions of redress, redemption, recovery, and reparation” (31) and analyzes eighteenth and nineteenth century archival documents alongside recent fiction, including Fred D’Aguiar’s 1997 novel Feeding the Ghosts, as a means of understanding the difference between “the kind of public history work being performed both ‘then’… and ‘now’” (33). The second chapter examines how Caryl Phillips’s fiction navigates the problems of law, economy, and exchange in the transatlantic slave system, as his narratives compel the reader to consider their own relationship to the legacies of colonial violence. Chapter three offers an in depth reading of David Dabydeen’s A Harlot’s Progress (1999). Blevins argues that the novel disrupts the authority of the archive through its central character, Mungo, whose fragmented and unreliable autobiography is revealed to have appropriated characters from the work of William Hogarth in a performance that fractures the abolitionist framework through which stories such as his were often told.

The latter half of the book maintains the archival emphasis but turns its attention to the visual arts. The subject of chapter four is blood, and the creative performances by queer-identified artists that disrupt the archival emphasis on genealogy. Blevins traces how the colonial history of blood, and its attendant manifestation in family trees, property ownership, and social order sits uneasily with the contemporary impulse to reproduce such notions of genealogy for commercial gain through genetics, marketed at black populations where it produces new fantasies of belonging.  Queer filiations disrupt these heteronormative fantasies, Blevins argues, evident in the work of Bernardine Evaristo, Dorothea Smartt, Inge Blackman, and Isaac Julien, who produce intimate histories and anti-genealogies that cross national, racial, and sexual lines (152). Chapter five places the work of artist Yinka Shonibare in the context of the self-tailoring and contemporary dandyism of fashion designer Ozwald Boateng, contrasting Boateng’s lack of reflexivity over the colonial echoes in British fashion’s approach to black masculinity with Shonibare’s critical awareness of the problem of redressing the past from within the (art) institutions that house the archive. Chapter six looks at Bristol and the artists who have sought to make visible the connections between the city’s past and present in their work.

The scope of the artists, topics, and themes covered by Blevins is wide, and he is not afraid to introduce pop culture examples as a means of enhancing the reader’s understanding of his argument. The most memorable of these is his brief analysis of the 90s film The Usual Suspects (1995) at the start of chapter three, which he compares to A Harlot’s Progress. Indeed, what is striking about the structure of the chapters is that the textual or artistic analysis, and an explication of the chapter’s main theme, is often delayed until the latter half of the chapter, as Blevins first considers an array of social and cultural contexts—the contemporary archive—that have influenced the public history that black writers and artists seek to contest. While such analysis offers a rich and important contribution to our understanding of postcolonial Britain, there is a slight danger that Blevins’s approach could undermine what he clearly wants to prove: that black artists have not only responded to public discourse on slavery and remembrance; they have also shaped it.

Given that Blevins’s argument hinges on demarcating the contemporary as a period marking “a discontinuity with the thematic concerns of the Black Arts Movement” (13), his emphasis on recent history is unsurprising. Yet one cannot but help think of those writers and artists who don’t fit neatly into the archival turn. Jackie Kay, Andrea Levy, and Zadie Smith, for instance, have not “increasingly turned away from the story of post-war migrations” (12), which Blevins claims defines the generation of black artists working since the 1980s. The artists and writers that Blevins draws upon are thus at once carefully selected yet somewhat disconnected from each other, mirroring to a degree the “wide-ranging and far-flung fragments, traces, and ruins” of the archive (4). Blevins is aware that his own critical practices echo those of the artists he examines: his book “assembles as its archive an equally provisional and improvisational selection of creative works” (8). I would have liked to read more reflection on the implications of his own “critical promiscuity” (9) and its place in “‘undoing’ the institutionally recognized practices of world-making” (10) in academia. Nevertheless his book plays an important role in broadening the scope of black British cultural and literary criticism, and certainly succeeds in its aim to “rethink the intersection of public history and embodied postcolonial subjectivity in the present” (7).

Josie Gill is a Lecturer in Black British Writing at the University of Bristol.
Her research concerns the intersections between contemporary literature, science, and race. She is Principal Investigator of the interdisciplinary AHRC Science in Culture funded project ‘Literary Archaeology’: Exploring the Lived Environment of the Slave.