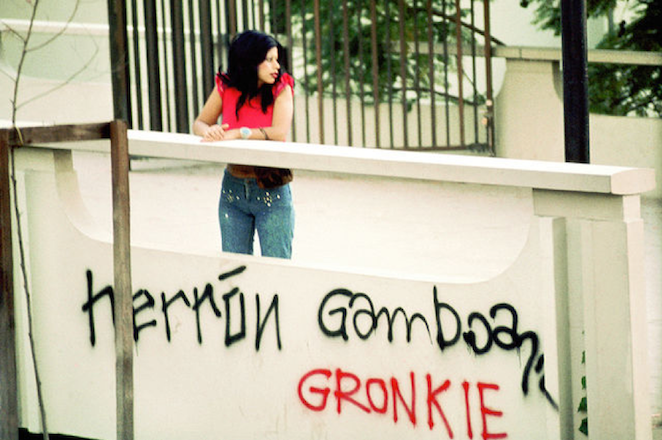 Leticia Alvarado’s Abject Performances: Aesthetic Strategies in Latino Cultural Production begins with a clever sleight of hand. Alvarado initially discusses the Dream 9, a group of nine undocumented activists who approached the U.S.-Mexico border from the Mexican side spectacularly clad in caps and gowns. Yet, rather than deploy the Dream 9’s protest as a launching point for her intervention, Alvarado writes that this this sort of action is what her work is not. That is, rather than focusing on the respectability politics that the Dream 9 (and the DREAMers upon whom they draw) embody, Alvarado considers the limits of these representations of Latinidad and seeks more liberatory representations of it, which she finds in abjection. For Alvarado, the abject figure of Latinidad par excellence is the Latin American mother. “Represented as overly fertile, irresponsible, lazy, and manipulative, she is the ultimate figure to expunge if not relegate to the periphery of the nation” (4), Alvarado writes, juxtaposing the contradiction at the heart of representations of Latinidad: on the one hand, the abject mother, on the other, the DREAMer who succeeds presumably in spite of her.

Alvarado suggests that abjection as an aesthetic strategy offers a way to think about Latinidad outside of recuperative narratives. She builds upon the Kantian binary of the beautiful and the sublime to theorize how “dissolution and formlessness has marked the sublime” (15), thus demonstrating an affinity with abjection and queerness that in turn opens up “the possibilities of Latinidad as a useful rubric” (15). In this way, Alvarado shifts discussions of Latinidad from identity-based frameworks to affect and aesthetics, observing that Latinidad is something we “do” (6). Expanding on a growing body of Latinx scholarship that points to the fundamental incoherence of the category “Latino” as something that applies to such a diverse group of people, Alvarado theorizes Latinidad as “a performative utterance” (4) staged on the field of aesthetics, which demonstrates “the doing of a Latinidad predicated on a shared sense of belonging and a way of performing the self often in negative relation to majoritarian publics, a dynamic we might call intrinsically abject” (6).

Alvarado’s book usefully brings aesthetics and affect theory to bear upon not only what Latinidad means, but also how its possibilities can shift. In contrast to the limiting example of the Dream 9, Alvarado’s theorization suggests that if Latinidad is something we do, then it is also something we can do otherwise. To explore the liberatory possibilities of Latinidad, Alvarado discusses a range of material, including the work of Cuban performance artist Ana Mendieta, the Chicanx art collective Asco, the TV show Ugly Betty, the Chicana artist Nao Bustamante, and Latino performative testimonies within the Church of Jesus Christ of Latter-Day Saints.

The book’s chapter titles—“Other Desires,” “Phantom Assholes,” “Of Betties Decorous and Abject,” and “Arriving at Apostasy” —highlight Alvarado’s playfulness as well as the theoretical range of her work. The first chapter considers how Ana Mendieta uses abjection to interrogate how “intersectionality is less a metaphor and more a sign of the failure of language to approximate shifting and ambivalent dynamics” (27). In Untitled (Glass on Body imprints) (1972), Alvarado parses out how Mendieta “negotiates her Latinidad in relationship not to Chicanidad but to blackness, and insists that Latinidad consider not just its indigenous past but also its relationship to black bodies as well as the push and pull of the border” (40). In her analysis of the Silueta series—begun in 1973 and featuring outlines cut into the earth, wooden effigies, and Mendieta’s own obscured body—Alvarado theorizes how the artist’s work “can be read as a utopian methodology for Latino Studies” (47). To make this point, Alvarado considers how the Siluetas, the first of which was staged in Mexico, are typically read as part of Mendieta’s reconciliation with Cuba (48) and are largely viewed as essentialist as they too easily align the brown female body with a presumed homeland as they depict the artist obscured in various natural landscapes. Alvarado reads against these arguments, suggesting that in these pieces Mendieta works through her privilege. Combined with her exploration of processes of racialization in Untitled (Glass on Body imprints), Alvarado ultimately suggests that Mendieta’s messy engagement with Mexico, the U.S., and Cuba provides a model for thinking through “coalitional possibilities beyond national borders” (49).

In her second chapter, Alvarado writes on Asco—which translates as disgust, revulsion, or nausea—the Chicano art collective which consisted of Harry Gamboa, Jr., Patssi Valdez, Willie Herrón, and Gronk, as well as a shifting cast of other artists. Alvarado reads the collective as “an abject structure of feeling” (87) and a means of exploring “abjection’s political dynamics” (59). Alvarado reevaluates the collectivity of Asco, revealing, for example, Willie Herrón’s controlling behavior towards his girlfriend, Patssi, as well as the visual alignment between Patssi and Gronk in Spray Paint LACMA (1972) and Asshole Mural (1974). Alvarado also explores Asco’s rejection of respectability, as demonstrated by the contrast between its avant-garde approach and the romanticized indigeneity of the Chicano Movement. In her analysis of Ca-Ca Roaches Have No Friends (1969), Alvarado illuminates the queer aesthetics that centrally inform Asco’s work and suggests that these aesthetics created yet another tension between Asco and the Chicano community. Rather than deifying the group, Alvarado considers how dissent and exclusion inform Asco’s abject artistic practices. 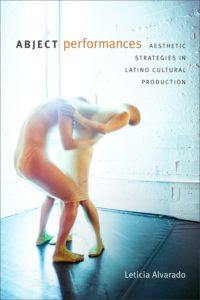 In chapter three, Alvarado contrasts the TV show Ugly Betty with Chicana performance artist Nao Bustamante’s America, the Beautiful. In much the same way that she critiques the respectability politics of the Dream 9, Alvarado examines how America Ferrera’s character, Betty Suarez, transforms from exemplifying “camp ugliness” (91) to adhering to mainstream notions of beauty that epitomize “racial uplift and decorum” (91). Meanwhile, in her consideration of Nao Bustamante’s America, the Beautiful as well as Bustamante’s appearance on the Bravo reality TV show Work of Art, Alvarado illustrates how Bustamante provides an alternative to Ugly Betty’s racial uplift by giving “us a mode of dissociation from neoliberal multiculturalism that allows, through the centering of affect, affiliation within the abject realm” (129).

While the final chapter on Latino performative testimonies in the LDS Church might seem like an outlier in this capacious book, it draws upon Alvarado’s greatest strength: her ability to use her personal experiences to create compelling theorizations of a range of phenomena that we might call Latinidad. In this moving chapter, Alvarado explains the central binary of the Book of Mormon—that of white Nephites and dark Lamanites—both of whom are the supposed original inhabitants of the American continent. The conversion of their supposed descendants promised a literal lightening and whitening, which is a key point that Alvarado explores as she contends with the popularity of the Church among Mexicans and Mexican Americans. As Alvarado writes, she is “interested in what happens at the moment of identification with the abject figure before the turn toward promised whiteness” (134). In one of her most powerful statements, Alvarado unflinchingly describes how she became, in the LDS Church’s terms, an apostate. While a sense of loss permeates the end of this particular chapter, it also offers the most liberatory vision of abjection in the book. Alvarado writes: “I attempt to inhabit this position in the spirit of the promise of the abject Lamanite, not beholden to the church or its structuring ideologies, but in critique of structured injustice and desirous of imagining a more just beyond” (159). There’s bravery in abjection, Alvarado demonstrates. Abjection exceeds any label and, in its excess, suggests new possibilities for what Latinidad can do, can mean.

Taken as a whole, Abject Performances promotes abjection as an alternative to the respectability politics that often limits Latinxs. In doing so, Alvarado opens up a number of new avenues for thinking about how Latinx cultural productions “do” Latinidad. For example, we might use Alvarado’s theorization of abjection to inform our understanding of how Latinx cultural productions—from Paris is Burning to the TV show Pose to the work of Arturo Islas—contend with the HIV/AIDS crisis of the 1980s. Alvarado’s work also allows us to consider the negative affects prevalent in Latinx music associated with lowrider culture, as well as in the Mexican-American community that forms around the Moz Disco’s Morrissey/Smiths nights in Los Angeles (or any number of Chicanx Smiths cover and tribute bands, such as the Sweet and Tender Hooligans, Mariachi Manchester, and Mexrissey). In short, in Abject Performances, Alvarado rigorously theorizes a strand of Latinx affective and aesthetic engagement that names a feeling we already have and a perspective we need to embrace.

Renee Hudson is an Assistant Professor of Latinx literature in the English department and a core faculty member in the Latino Studies Program at the University of Massachusetts Boston. A former University of California Chancellor’s Postdoctoral Fellow at UCSD, she is currently at work on a project that considers the hemispheric role of revolution in Latinx literature.