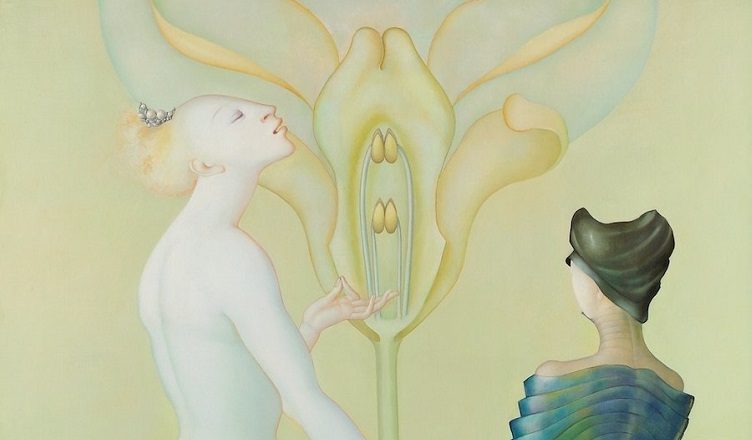 Scholarly work on Angela Carter has grown enormously since her untimely death in 1992. While a number of introductions to her work appeared throughout the 1990s, such as Sarah Gamble’s Angela Carter: Writing from the Front Line (1997) and Aidan Day’s Angela Carter: The Rational Glass (1998), more recent studies have focused on particular aspects of her work or have sought to unpack the broad range of literary and non-literary influences. Edited volumes such as Rebecca Munford’s Re-Visiting Angela Carter: Texts, Contexts, Intertexts (2006), and Sonya Andermahr and Lawrence Phillips’ Angela Carter: New Critical Readings (2012) have opened up the field of Carter studies by shedding light on the way that she appropriated material from the past.1 As Carter herself put it, “I feel free to loot and rummage in an official past, specifically a literary past, but I like painting and sculptures and the movies and folklore and heresies, too.”2 One thing that Carter “looted” was surrealism, and this aspect of her work has, until now, gone largely unacknowledged. As Anna Watz argues in Angela Carter and Surrealism: A Feminist Libertarian Aesthetic, surrealism has only ever been considered a “marginal influence on Carter’s writing,” something which her book addresses by conducting a comprehensive and engaging study of the way that surrealism permeates Carter’s writing project.3

The book traces this influence throughout Carter’s entire oeuvre, from her early poetry and first novel, Shadow Dance (1966), through her short stories, novels and essays of the 1970s, and up to her final works, including her anthologies and work for television. By taking such a wide-angled perspective, Watz is able to demonstrate the multiplicity of ways in which Carter used and responded to surrealism. While early texts feature allusions to surrealism and mobilize particular surrealist techniques, later texts both embrace more fully a surrealist aesthetic and parody its ideas and concepts. One of the book’s strengths is its nuanced and subtle theorization of Carter’s relationship to surrealism: while other critics, drawing heavily on Carter’s statement in “The Alchemy of the Word” that she “had to give […] up” the surrealists, have tended to simplify this relationship by suggesting that Carter went from celebrating surrealism to a complete rejection of it, Watz convincingly shows that Carter never wholly abandoned her interest in surrealism despite being highly critical of certain aspects of the movement.4 As she writes: “Carter never dismissed or abandoned surrealism as such, but continued to engage with the movement’s aesthetic, cultural and political practices through parodic critique as well as endorsement and active participation.”5 By referring to Carter’s surrealism as a “parodic critique” and, elsewhere, as a “critical appropriation,” Watz paints a more complex and ambivalent picture of Carter’s relationship to surrealism.6 In large part, this revision of Carter’s surrealism is due to a careful and detailed examination of her private journals and manuscripts, made available to the public by the British Library since 2009.7

One of the fruits of Watz’s labor is the discovery of the important role that scholarly works on surrealism played not only in Carter’s understanding of the movement but also in her writing project, another aspect that has “eluded earlier scholars.”8 These include Sarane Alexandrian’s Surrealist Art (1969), Roger Shattuck’s The Banquet Years: The Origins of the Avant-Garde in France – 1885 to World War I (1955) and Roger Cardinal and Robert Short’s Surrealism: Permanent Revelation (1970). As Watz shows, Carter takes a number of images from these works and puts them to use in her fiction. Indeed, some of the themes and episodes of The Infernal Desire Machines of Doctor Hoffman (1972) are “drawn directly from these sources.”9 The most influential study of surrealism for Carter is undoubtedly Xavière Gauthier’s Surréalisme et sexualité (1971), which Carter translated between 1972 and 1973 but never published.10 Watz argues that Carter’s translation “coincides with a significant shift in her relationship to surrealism in the early 1970s, when her increasing interest in feminism and the politics of desire lead [sic]her to interrogate surrealist visual and literary representations of women in a more sustained manner.”11 Watz makes this point of transition central to her book’s argument: that Carter’s feminist politics derives in large part from her engagement with surrealism, and especially with Gauthier’s study. Relatedly, Watz also makes the claim that Surréalisme et sexualité is one of the main sources of inspiration for Carter’s so-called “demythologising” project, which appears most clearly in The Passion of New Eve (1977) and The Sadeian Woman: An Exercise in Cultural History (1979). Again, Watz suggests that Carter’s interest in the Marquis de Sade is partly the result of Gauthier’s influential study. All of these points are captured by the book’s subtitle, “A Feminist Libertarian Aesthetic,” a line that Carter herself used to describe what she saw as Gauthier’s project in a letter to Marion Boyars, the prospective publisher of Carter’s translation. Watz’s original archival research, in particular her examination of Carter’s little-known translation of Surréalisme et sexualité, therefore sheds new light on Carter’s writing practice, her feminist politics and the development of her intellectual project.

Watz begins her study by analyzing the figure of woman in surrealism, a figure that is both “venerated and violated,” and seen as inherently subversive due to her “perceived association with irrationality, eroticism and revolution.”12 While Carter was attracted to surrealism’s project of liberation, she was highly critical of the movement’s idealizations of femininity, and in this she was clearly influenced by Gauthier’s Surréalisme et sexualité. Watz also makes a case for reading Carter as laying the groundwork for later feminist debates concerning surrealism’s relationship to femininity. Chapter 3 builds on these initial points of discussion by focusing on the gendered violence that pervades Shadow Dance. The influence of surrealism is apparent in this text’s “marvellous disruption of subjective reality,” an estrangement effect “primarily produced through the novel’s evocation of the uncanny,” a reading that also takes issue with those critics who characterize Carter’s early texts as realist.13 Crucially, this use of surrealism makes a feminist reading a deeply ambivalent one, as Watz is keen to stress, for while it is possible to see the text as subversive of misogynist patterns, its lack of a clear “critical response by the author” leaves it open to the charge of merely reproducing them.14 The representations of woman as either passive doll or threatening carnivore mobilize surrealist imagery, from surrealist poetry’s tendency to idealize femininity to André Masson and Max Ernst’s obsession with the praying mantis, but without textual irony or an alternative narrative perspective it is difficult to sustain a feminist reading of them.

By contrast, Doctor Hoffman, the focus on Chapter 4, not only draws on surrealist images and ideas but puts them self-consciously on display in order to parody and critique them. This later text is arguably Carter’s most surreal, with a dizzying array of references and allusions to surrealism, including Duchamp’s Étant donnés, Masson’s Girl in a Black Gag with a Pansy Mouth and a dream Max Ernst recorded in his diary. However, Watz argues that it is not just that Carter is drawing more heavily on surrealism but that she has begun to use it more critically. For example, she suggests that Carter deliberately associated Hoffman’s failed revolution with surrealist imagery in order to point out “the impossibility of a truly ‘free’ desire.”15 In a sense, then, Carter adapts surrealist images and strategies to critique surrealism itself. The surreal objects of desire that pervade Hoffman’s world are once again distinctively masculine, but unlike Shadow Dance they are self-consciously, even pornographically, put on display along with a foregrounding of the narrative “I” as masculine.16 Surrealism is thus deliberately shown to reach a limit in that its subversion of reality unwittingly reinscribes misogynist images and symbols.17

Watz then turns directly to Surréalisme et sexualité in order to examine how Carter’s reading and translation of it informed her intellectual development, and in particular how this shaped both The Sadeian Woman and New Eve. In both books, there is a conscious and critical engagement with mythic conceptions of femininity, and this “anti-myth” project, as Watz calls it, can be traced back to Gauthier’s study. With these two books from the late 1970s, Watz argues that Carter’s allegiance to surrealism has shifted more towards “the ‘dissident’, darker version […] predicated on eroticism and transgression,” seen most clearly in the writings of Georges Bataille’s or Hans Bellmer’s mutilated dolls.18 As with previous chapters, Watz also sheds new light on the surrealist sources of Carter’s writing: New Eve draws on Robert Desnos, Robert Benayoun, and Leonor Fini among others.

In the final chapter, Watz argues that Carter’s later works move “away from surrealist allusions as a major reference point in the articulation of her feminist position” and instead draw increasingly on “issues of theatricality and performativity.”19 While surrealist influences are still apparent in Nights at the Circus (1984),20 this text clearly betrays Carter’s revisionist approach to surrealism and its mythical representations of femininity. Carter uses Fevvers to flaunt her constructed femininity both on and off stage, challenging the male gaze head on. Watz is not blind, however, to the ambivalence of this gesture insofar as it continues to rely on the structure of masculine voyeurism and phallic power. Nevertheless, she suggests that this impasse does not lead Carter into a position of “resignation and withdrawal,” but instead into one of continually attempting to “undermine and challenge the existing power structure from within, through ‘performative subversions’.”21 Watz also reads Carter’s anthology work as “a kind of surrealist practice of collecting, adopted for feminist purposes.”22 Putting together “an alternative historiography of myths and fairy tales” in the two Virago books of fairy tales, Carter resembles the “surrealist ethnographer” who, “rather than attempting to categorise and define non-familiar objects […] seeks to allow them to speak for themselves in new ways,” thereby challenging their “official” uses and the conventions they uphold.23 Likewise, Wayward Girls and Wicked Women (1986), which includes “The Débutante” by surrealist Leonora Carrington, is positioned as “anti-patriarchal” in its anthologization of stories of “female insubordination against the prescribed socialisation and gendering represented by bourgeois society.”24 Crucially, Watz notes that the variety of stories in all three anthologies is not designed to emphasize a universal “femaleness” but instead the diversity of modes of femininity. 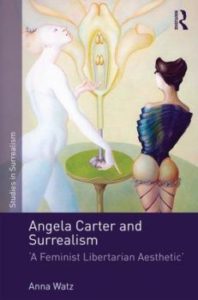 Watz concludes by noting that surrealism gave Carter “a language and form for subversion” and “critically shaped the feminist politics that pervades her oeuvre.”25 It was an aesthetic that she never entirely abandoned and which she drew on up until her death. Late works such as “Alice in Prague or The Curious Room” (1990) and her controversial television program The Holy Family Album (1991) utilized surrealist black humor, shock, and an aesthetic of the marvellous. Nevertheless, Carter was adamant that the subversive potential of surrealism needed to be turned back onto the movement itself and that the very “terms of subversion and struggle needed to be subject to critique.”26 What comes across most strongly in this exciting study of Angela Carter and surrealism is precisely that: a need to celebrate and critique simultaneously. Anna Watz has enriched Carter scholarship immensely by giving us a more nuanced understanding of a major and until now neglected facet of Carter’s work. In this it embodies one of the central attractions of surrealism for Carter: to see the world with new eyes. After reading this brilliant book, scholars will undoubtedly see the work of Angela Carter anew.

I am an Early Career Researcher based in Bristol, specialising in twentieth-century and contemporary literature, women’s writing, gender studies and visual culture. I completed my PhD on the relationship between gender and the visual in Virginia Woolf and Angela Carter at Cardiff University in 2016. I am also the creator and administrator of angelacarteronline.com, an independent website that aims to provide a comprehensive archive of material relating to the life and works of Angela Carter. It features news, reviews, interviews, opinion pieces, photos and much more, and hopes to engage both new and existing fans of Angela Carter. You can also follow Angela Carter Online on both Facebook and Twitter.