I keep returning to a two-page spread from a comic book I read when I was five years old. The spread has continued to occupy me with thoughts of black futurity, white feelings, and the end of the world.

Co-created by Neil Adams (artist) and Gerry Conway (writer), Killraven was a Marvel Comics character who first appeared in Amazing Adventures #18 (May 1973). A hypotextual adaptation of H.G. Wells’ War of the Worlds (1897), the comic was an elaborate deviation from the Wells text under the alternating titles of War of the Worlds and Killraven: Warriors of the World.1 The departure of Adams and Conway after the first issue led to the eventual pairing of the duo most associated with the series run: Don McGregor (writer) and P. Craig Russell (artist). McGregor’s Killraven run was concurrent with his writing for Jungle Action (1972-1976), which featured the character Black Panther. With his distinct racialization of the classic comic tenets of heroism and justice, McGregor consistently infused his work on Killraven and Jungle Action with elements of social critique.2

The Wells novel details a Martian invasion and subsequent domination of Earth that ends with the alien invaders defeated by a lack of immunity to the infectious advance of a common germ. Set along an alternate timeline of the early-twenty-first century, Killraven’s storyline begins in 2001 with a Martian invasion, one hundred years after the events of the Wells novel. and The aliens return immunized and now resistant to Terran pathogens. Brutally efficient, they are quickly victorious. With the Earth now a Martian “extractive zone,” women are bred for their infants—a Martian delicacy—and men are forced to participate in gladiator games for entertainment.3 As a child Killraven was subjected to transhuman experimentation and trained for the arena.4 These biomodifications amplify his physical abilities and also provide him a latent power: the psionic ability to inhabit and feel the consciousness of another. He eventually escapes, and the titular comic opens twenty years after the Martian invasion and exodus. Killraven and his companions call themselves the Freemen (no irony) and the series follows the travels of the resistance group across America.5 They gather new members along the way while battling Martians, collaborators, warlords, and the unhinged.

June 2019. Somewhere between Nashville and Chattanooga…

A ‘fill-in’ issue, Killraven #33 (“Sing Out Loudly…Death!”) opens at the close of a long day of travel as Killraven and his companions take shelter in a cave.6 While the others sleep, Killraven lights a torch and wanders deeper into the cave system. He eventually stumbles into a brightly lit clearing with a village in the distance. Suddenly, he is attacked by a group of Black men in tribal dress. After a brief struggle they knock him unconscious.

Captured and bound to a pole as a sacrifice to their god, Killraven meets the leader of these underground people when he arrives carried on a Cadillac litter. “I is the chief, Red! I is the head man!” The leader continues, “Dis here cave is all what’s left o’ a bunch o’ folks what used to have to ride in the back o’ buses—use separate rest rooms.” Killraven replies, “What are buses, friend? And for that matter—what are restrooms?” To this the leader replies, “Whatever dey was Red—dey ain’t important. Dese here folks are, tho’—an’ they ain’t takin none o’ your honky trash no more!”

When addressed as ‘white’ a puzzled Killraven declares, “I don’t get your meaning,” and then insists on the arbitrariness of skin color.

The curious nature of Killraven’s conception of race perhaps has much to do with his abduction at six years old by the Martians. Enslaved and trained in the ways of death sport, he was fostered with no history. Subsequently, Killraven must lack any knowledge of racial privilege and white supremacy. As a result of this nature vs. nurture exercise, he advocates colorblindness in a postracial dystopia where all human life is disposable and without value. All lives don’t matter. The chief’s response calls for Killraven to empathize with all what’s left, the survivors.

Conditionally Morlocks, these subterranean people have no place in the world (above) and appear to reside outside of time. Afro-topped and barefoot, their faces are adorned with ethnic markings. Armed with spears, they wear loincloths coupled with tribal and urban jewelry. Their facial features are often minimal as though they are permanently at a distance. Devoid of Wakandan flourishes, they appear as Afrofuturist Luddites so impacted by the afterlife of slavery that they insist on living a before. Their present-future is a ceaseless time before the “violent metaphysical enterprise” of slavery that “structures western thought.”7 Black sociality on pause, they reside in a pre-modern Africanist state of suspension, an Afrodiorama. Temporal sovereignty is a racial privilege.8

The spread on the following pages (16-17) opens with the leader’s quip of “Can yo’ dig it, Red?” as Killraven becomes riven when he inhabits the leader’s consciousness and memory.

Pierced and propelled, he strains under a continuum that couples antiblackness with antihuman duress. With great power comes great susceptibility as his power always exacts pain. These moments of embodied experience consistently compel his submission, but in this particular instance Killraven is embroiled in a black historiography. 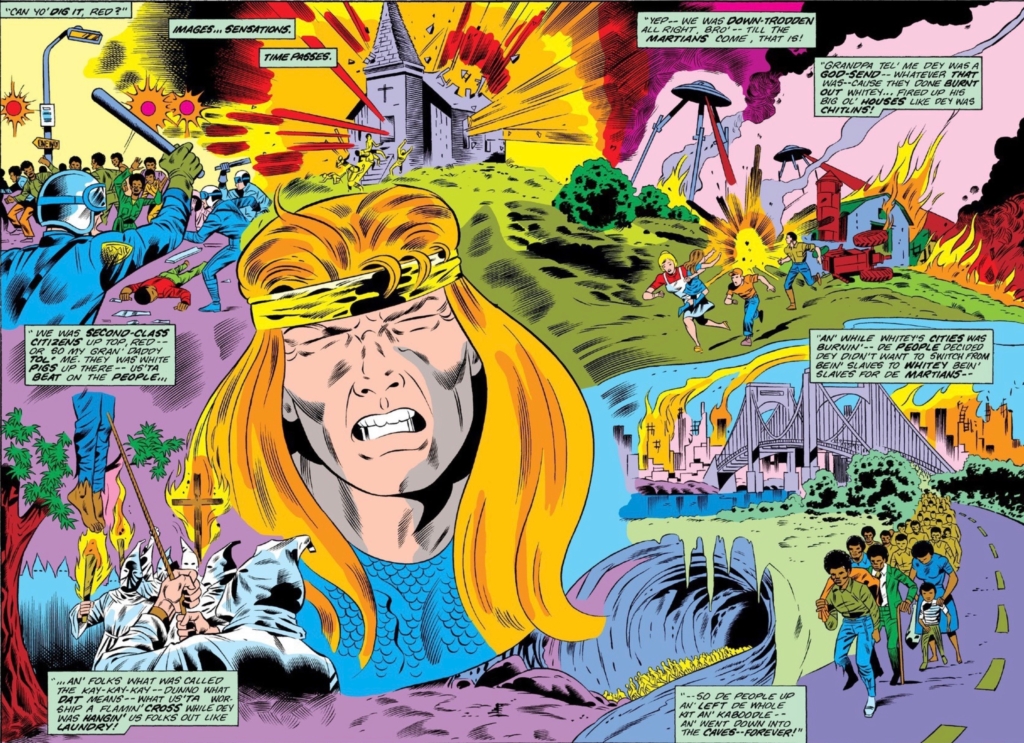 Neither clockwise nor the classic vertical and horizontal arrangement can account for understanding this tableau. Reading the spread is a looping and angular affair as the arrangement of the unframed scenes or insets produces reading trajectories that are both out of time and across time. Its spatial logic of flowing disarrangement commands the imagining of a temporal and historical ordering of the spread’s form and content.9 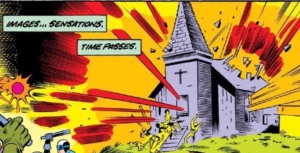 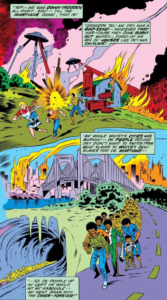 INTERMISSION: How does an object teach you to read damnation?

CHIMES. Return to your seat

The spread provides an explanation for the underground assembly as it abounds with mnemonic triggers, swollen fragments of antiblack terror across Jim Crow, the Civil Rights era, the urban unrest and insurrections of the late 1960s, and alien annihilation. The primitivist rendering of this subterranean assembly might just be emblematic of the tribal tropism of antiblack visual culture that suggests a neo-colonial encounter. Yet, it also might suggest something symptomatic of how a people once subjugated and used as nonhuman technology might refuse all modern technology. Game recognize game, tool recognize tool. They worship what they believe is a god with ritual sacrifices. Killraven reveals to them that this god, their Kong, is nothing more than a Martian leviathan. Their shelter has been a Seneca Falls horrorshow all along.

And the dialogue…Fired up his big ol’ houses like dey was chitlins. Really though? A bad jive translation? Rather than strictly providing narration and exposition, the dialogue also offers dissociation. An unsettling and contradictory spectacle, the spread contains conflicting and conflicted opinions at play. With schwas gone wild, this dialect seemingly attempts to hybridize the Blaxploitation (Black Power pop cinema) approximation of jive and the speech of the plantation tradition.10 Importantly, the revolutionary stylings are not thoroughly subsumed by the plantation traces as the caption’s vernacular nevertheless attests to a critique. 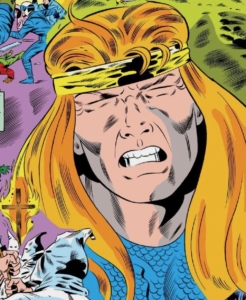 0: And the center, a deeply empathetic white man? Hair ablaze (across history).

A white man straining under a volume of blackness. Engineered by alien technology and recast as a highly sensitive empath, Killraven’s attunements are always uninvited and random. His psionic activations focalize him, opening him to the centrifugal and affective forces of others. What could be thought of as his hyperempathy goes by many expressions throughout the series: mind-visions, clairsentience, beyond thought, transplace, mind-tap, telepathic eavesdropping, extrasensory vantage point, and mind swap.11 The range of phrases indicates mystic arts, new age sciences, augmentation circuits, and affective mappings. This ability metamorphizes him into an intensity, but in this underground his sensating body becomes a vessel of affectivity and the necessary disavowal of Black feelings that provides the possibility for a social order now extinct.12

In his encounter with the Black survivors, Killraven’s hyperempathy momentarily destabilizes his whiteness yet still centers him as culprit and arbiter of testimony. Always a pilgrim. Always a colonizer. His psychic laboring operates as a Cartesian defense. Might this be more a showcase of complicity than empathy?13 An apocalyptic event as a multiplicity, the tableau details the convergence of antiblackness and settler colonialism, white supremacy and Martian supremacy.14 The end of days scene of the spread exposes a world gone wrong long before the not-so-little green men came around. There is an acute conception of how the end of white supremacy signals the end of the world.15 With its alien invasion and human resistance swagger, the Killraven series was cancelled a year later before the end of its increasingly muddled run to a presumed final showdown. I remain interested in the comic’s envisioning of an advanced technology that gives a white man the capacity to feel blackness and antiblackness. That, and the notion that even if such technology existed, the world needs more than just feelings.