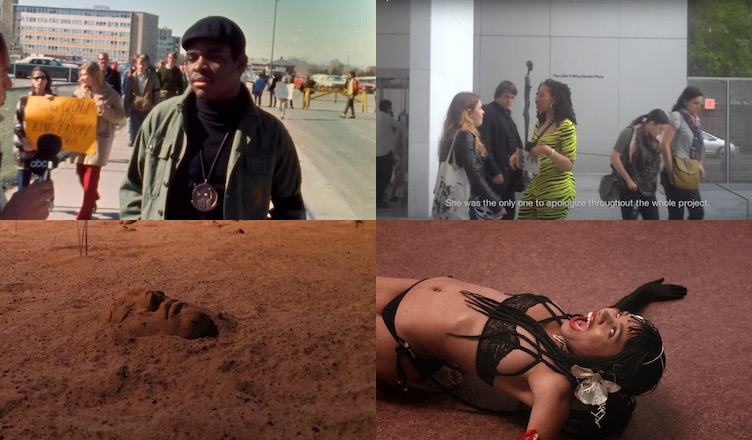 Ayana Evans is an artist and fashion designer whose performance pieces spotlight her responses to the pressures of the modern art world and the misogynoir gaze. Misogynoir, a term coined by Moya Bailey and Trudy in 2008, offers an intersectional account of black femme oppression.1 It inflects W.E.B. DuBois’s identification of Black people as the “problem” identified by a patronizing liberal curiosity that disrupts white supremacist business as usual.2 In Evans’s work, the gaze is redirected back toward those who presume that the problem resides within and upon her black femme flesh.

The performance suite entitled “Operation Catsuit” specifically critiques perceptions of the Black woman’s body as never her own possession and therefore available for consumption and photographic capture. Evans’s work is situated within a long history of African American women’s avant-garde art practices wherein, as scholar Uri McMillan explains, “performing objecthood becomes an adroit method of circumventing prescribed limitations on black women in the public sphere while staging art and alterity in unforeseen places.”3 Through embodied performance, Evans disrupts expectations of civility, womanhood, and the identity of the avant-garde artist.4

Clad in a neon-green, zebra-print, Butch Diva bodysuit as she moves in public and semi-public spaces, her womanly curves on display, makeup and hair beautifully styled, Evans’s stroll in her black pumps presents the “excessive body” of the black femme—a picture of “excess flesh” that, as Nicole Fleetwood explains, permits a “focus on black female cultural producers’ engagement with the imago of black female excessiveness and their critique of the racializing and gendering apparatuses of the visual field.”5 The zebra-print and neon mark her body as wild and daring—traits usually respectfully attributed to the avant-garde. And yet, despite the art context, Evans’s embodiment of wildness is greeted by a hunter’s impulse to capture. 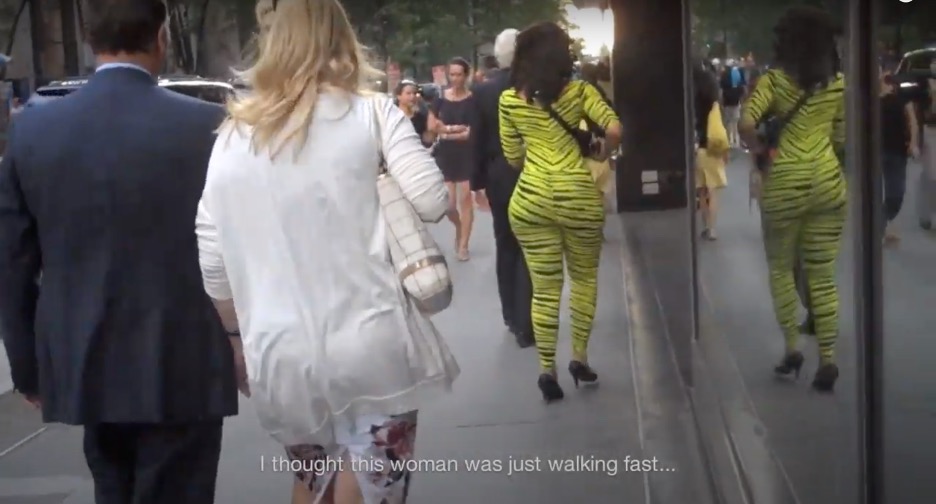 “Operation Catsuit” brings to the fore the gendered, raced, and classed contours of walking in the city and amongst its cultural institutions.6 At present, midtown Manhattan has priced out many of its non-White denizens, a consequence of the gentrification that MoMA has in part exacerbated with its exorbitant admission fee (usually $25 but suspended on Friday evenings—the precise occasion on which Evans makes her trip) and its mercenary annexation and destruction of the neighboring American Folk Art Museum. The first of the recorded performances begins inside the Museum of Modern Art atrium. Evans then exits the lobby through the revolving doors with her film crew discretely in tow. Within a minute of her public walk, Evans is pursued by a White woman dressed in what could be interpreted as “business casual” and a White man in a navy business suit and by her own undetected camera crew. As the subtitles inform us, the White woman scrambles to take a clandestine photo of Evans from behind. The woman’s act (which is not properly an encounter because the engagement and consent of the artist was never sought) forecloses any interpretation of Evans as an unremarkable walker of the city (in Michel DeCerteau’s sense) or flâneur (in Walter Benjamin’s) who is not herself an object of a proprietary gaze.7 In this environment of corporate whiteness, Evans’s stylish femme blackness is figured as illegible at best and a transgression deserving of optical policing at worst.8 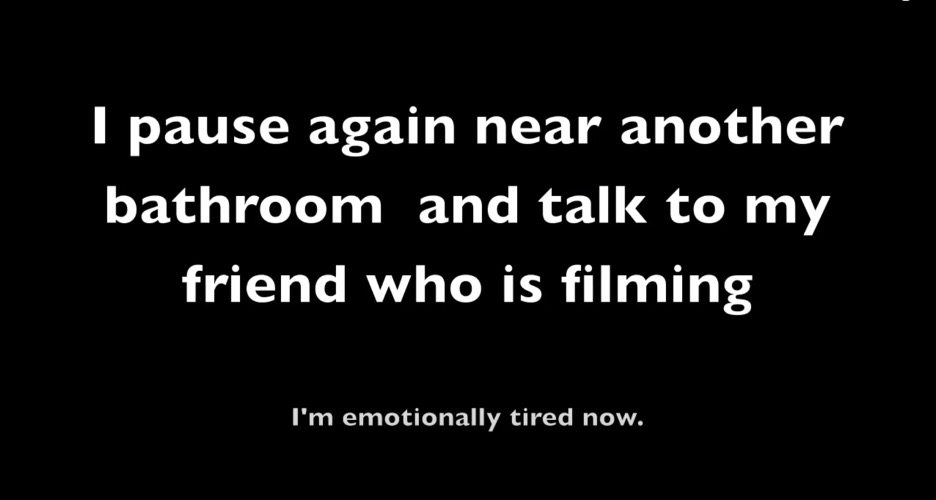 Evans’s performance intersects with and responds to recurring issues in the African American performance art tradition. In particular, as endurance art—a strategy of pushing the body to its limits—her piece underscores the uses and abuses of black flesh as she works to make her body signify in terms acknowledged, if not fully controlled, by the artist herself.9 As with Kara Walker’s 2014 film An Audience that documents visitors interacting with Walker’s 2014 installation A Subtlety; Or the Marvelous Sugar Baby, Operation Catsuit forces important if painful questions about how Black women in art might be beheld by a non-proprietary visual address. However, whereas Walker turns to camera upon art goers interacting with her critical depiction of a Black woman, Evans turns the camera upon art goers interacting with her own body and with the artist herself, a move that amplifies the labor and consequences of being seen as a Black woman.

The emotional and physical exhaustion of this artistic labor (that is not interpreted as art) is made apparent in the intermittent subtitles that give a view to Evans’s interior state. Halfway through the video, an intertitle censors or stands in for a scene in which Evans breaks character and reviews the footage. The text also informs us that Evans “is emotionally tired now,” giving a real-time sense of an exhaustion that has built within her but is unseen by her immediate onlookers and would otherwise also be unseen by the video’s viewers. 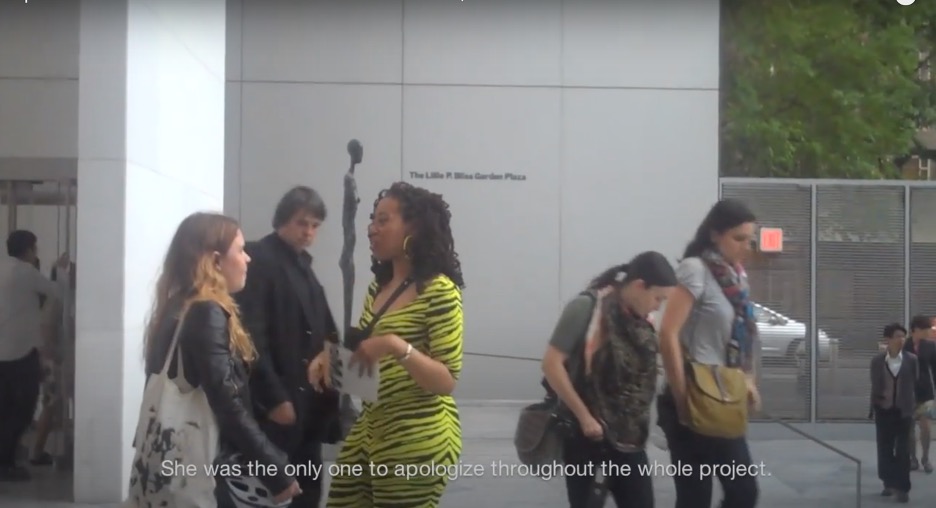 The punctum of Evans’s just-another-girl-in-the-M-O-M-A performance is the  impromptu neighborly conversation, such as one that occurs near the end of the video. Evans responds to a young White woman’s apology for taking a picture without permission by cheerfully explaining the project and, one assumes, the woman’s predicted function within it. With this, the tables are turned, and the possessive gaze of this art-lover is deflected if not shattered. Any relief from this scene is fleeting, however, as an Asian woman takes their photo, the Black male security guard who has forgotten previously meeting Evans asks her out, and a White man grabs some snaps of Evans as she departs the museum. 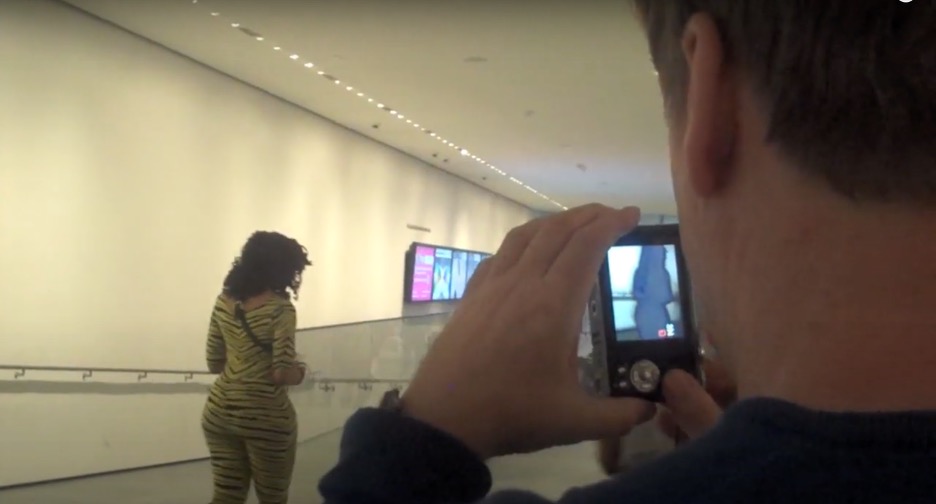 We would do well to explore what “Operation Catsuit” reveals about the prejudicial architecture of museums and cities as well as Black women’s radical choreographies of engagement and evasion.10 What is the audience’s responsibility to the art object, especially when the “object” is a Black woman and artist who, as such, has been designated antithetical to reverence? In other words, Gentle Viewer, what does it look like when black femmes are not the problem?

Courtney R. Baker is the author of Humane Insight: Looking at Images of African American Suffering and Death (University of Illinois Press, 2015) and has written essays for Avidly: A Los Angeles Review of Books Channel, Journal of Cinema and Media Studies, Camera Obscura, and Dilettante Army. She is currently writing a book on black film formalism and historical subjects.