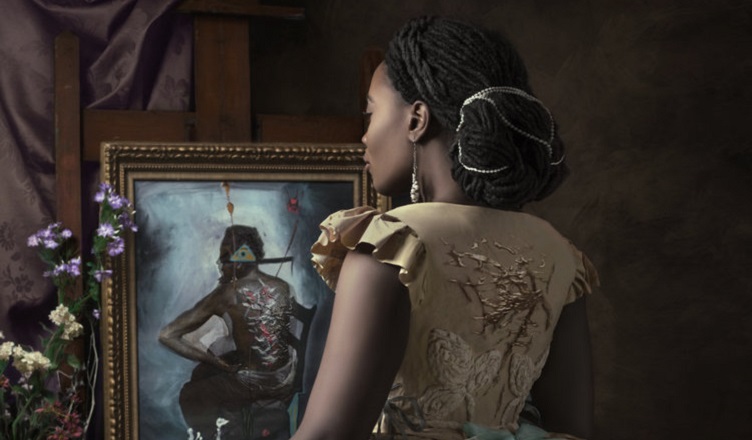 An opening night with 900 enthusiastic attendees attested to the urgency of Bordering the Imaginary: Art from the Dominican Republic, Haiti, and their Diasporas. Showing at the gallery at BRIC Arts | Media House from March 15 to April 29, 2018, the exhibition features work by contemporary artists living both in and away from the island nations that share complicated and rich histories. Curated by Abigail Lapin Dardashti, the exhibition tells narratives that range over three main themes and a variety of visual perspectives: “Revolutions and Unifications: The Contemporary Resonance of 18th and 19th Century History”; “Borders, Fragmentations, and Intertwinings”; and “Bodies Transformed.” A collaborative installation by Vladimir Cybil Charlier and Scherezade Garcia provides a synthesis of these themes.

In “Revolutions and Unifications: The Contemporary Resonance of 18th and 19th Century History,” works by Freddy Rodríguez, Vladimir Cybil Charlier, Tessa Mars, Scherezade Garcia, Julia Santos Solomon, and Fabiola Jean-Louis revisit and revise events from the two nation’s histories during the French and Spanish colonial periods. Rodríguez’s Roots (1991) and Dulce cruz (Sweet cross) (1992) reclaim the Dominican Republic’s soil and sugar, conquered and commodified by the Spanish Conquest. Charlier’s Soldats Marrons, Work-in-Progress (2018) and Mars’s Dress Rehearsal (2017-2018) both center on Haitian resistance to French colonization by emphasizing, respectively, solidarity amongst Maroon soldiers across the island and participation by women such as Dédée Bazile in the Haitian Revolution. Santos Solomon’s Topography of an Island (2016-2017) and Garcia’s Acariciando el Chivo (2017) both reclaim the gold of Spanish baroque aesthetics1 to dismantle the island’s colonial histories via representing it topographically and metaphorically without borders, Garcia painting the indigenous names for Haiti and the Dominican Republic—Ayiti and Quisqueya—as testimony to the island’s indigenous populations and histories decimated by colonialism. Jean-Louis’s portraits of aristocratic black women layered in sumptuous rococo silks elevate historically enslaved women to royal status. Madame Beauvoir’s Painting (2016) reminds viewers of the ongoing violence inflicted upon women via the embroidered keloidal reference to lashings. Marie Antoinette Is Dead (2018) reclaims power and ancestral practices via the representation of the cloth doll, red and white yarn bound figures, herb jar, and rose quartz crystals represented in the photograph.

Borders, Fragmentations, and Intertwinings brings works by Pascal Meccariello, Edouard Duval-Carrié, Alex Morel, and André Eugène and Evel Romain of atis rezistans collective together to demonstrate the complexities and permeability of the island’s ideological borders. Meccariello’s Mapping on Broken History (2017) presents the island as framed images of a fractured cartography, metaphorically speaking to the irreconcilability of historical memory and the necessarily incomplete form of any documentation, creative or otherwise. Duval-Carrié’s Hispañola Saga: El tigere y el congo (Hispaniola Saga: The Tigere and the Congo) (2016) shows two masculine figures standing on either side of the bridge over the Dajabón River marking both the 1937 massacre of Haitians and Dominicans and the terrestrial border between the two nations. The men’s poses and settings mirror each other’s in an oddly complimentary / complementary way, despite their differences. Eugène’s Apwe Azor (After Azor) (2017) and Romain’s Apwe Ti Roro (After Ti Roro) (2017) appear as two nkondi figure offerings to protect the memories of the Haitian drumming legends that they recall in name. The haunting contrast created by Morel’s Javier Vargas Standing Guard by Border Marking Pillar Number 1, Manzanillo—Dominican Republic (2015) and Haitians Crossing the Ouanaminthe/Dajabón Border on Their Way to the Binational Market on the Dominican Side (2015) shows the lengths taken to enforce a border that resists manifestation, as seen in the surrealism of a stone pillar being guarded by a rifled young soldier and the unperturbed expressions of Haitian merchants as they cross the border and leave the decaying barbed wire fence in their wake.

Bodies Transformed unites works by Groana Melendez, Roberto Stephenson, iliana emilia garcia, Raquel Paiewonsky, Nyugen E. Smith, Raúl Recio, and Patrick Eugène that communicate the nuances of ethnic and racial identities across the island through material culture. Melendez’s Mami’s Vanity (2014) presents a portrait of the artist’s mother through documentation of the assemblage of objects upon her vanity table: the rococo-esque porcelain lamp; filigreed gold-plated trinket tray, boxes, and clocks; and rich perfumes and collections of blowout brushes. Together these articulate a space of divine matriarchal royalty and create an offertory to the next generation enthroned in anticipation in a photograph amongst their ancestors’ objects. Stephenson’s Biznis Konprime, Ri Kristòf, Pòtoprens (Pills Business, Christophe Street, Port-Au-Prince) (2015) features a tapered cylindrical arrangement of found objects—a bucket, pill blister packets, a strip of disposable razors like bandoliered bullets—forming the uncanny specter of a conga or djembe drum. garcia’s The Sage and the Dreamer (2018) gives arboreal shape to thirty wood-and-straw chairs—furniture historically found in both Haitian and Dominican homes—that appear to spring out of the gallery floor and into the ceiling like a fountain of shared memories and hope for a unified island future. Paiewonsky’s evocatively and topically titled Wall (2016) stacks bare and upholstered concrete blocks into the form of a corner wall (its status legible as in-progress yet indeterminable as to whether or not it’s unfinished or mid-remodel) speaks to the internal borders on the island as well as external attempts to border the Caribbean, such as through the U.S.’s Third Border Initiative. Smith’s Bundlehouse: Borderlines no.6 (2018) turns Hispaniola on its side and stitches together its land into a singular figure undefined by national borders, leaving only the recognizable outline of the northern river in red as reference to the historic massacre. Smith’s Spirit Carrier series (2018) hangs in the gallery, creating a path to Bundlehouse, the carriers being assemblage portraits of Haitians and Dominicans who have died by racial violence as a result of the effects colonial projects and transatlantic enslaved trade have had upon the two nations. Recio’s Los Dibujos de la Chapeadora (Drawings of the Gold Digger) (2015) presents a series of drawings where a lone blonde figure surfs onto Hispaniola, absconding like a siren back into the sea with a large bundle of golden bananas and leaving the detritus of emptied drinks and wine bottles as evidence of their visit. Eugène’s abstract expressionist Mizè’m ak Richès Mwen (My Misery and My Riches) (2017) arranges found objects—a portion of a crate, toy building blocks, a copper ladle—together with large color field washes of fuchsia, cobalt blue, canary yellow, and sepia, evoking the color palettes of Haiti’s architectural and environmental landscapes.

These themes are synthesized by Charlier and Garcia’s collaboration, a three-part installation in a BRIC project room just above the main gallery space. In Conversation (2018), projected silhouettes of both artists’ profiles speak in English, French, Haitian Creole, and Spanish, sharing a bricolage of what can be experienced as personal experiences, perceptions, and passages from the texts noted on the wall label: Julia Alvarez’s In the Name of Salomé (2000) and Marie Vieux-Chauvet’s La Danse Sur Le Volcan (1957). They take turns sharing the refrain that is painted on the wall, “Naci española / nom apre midi / mwen se France / por la noche / mwen se Afriken / Woy! What will / become of me?” Amongst the painted text hang life preservers painted in the soft pinks and blues, as well as the rich golds and deep purples, of sunrises and sunsets over the ocean. The brightly beaded and ribboned life preservers, part of the Borlette (Lottery) (2018) installation, are reminiscent on the surface of Haitian voudou flags and carnival celebrations while structurally referring to the histories of mass migrations of Caribbean refugees by sea. In the third part, Escenas de la selva (Scenes from the Jungle) (2018), organic shapes layer upon each other repeatedly until the jungle becomes visible, reaches mass density, and then starts over again. The layering of code-meshed languages, multiple visual referents, and the repeated accumulation of forms offers an audio-visual and material interpretation of the Dominican Republic and Haiti’s distinct yet entwined identities and relationships.

While exhibitions have addressed art and history from the nations separately, such as 1996’s Modern and Contemporary Art from the Dominican Republic co-curated by Elizabeth Ferrer and Dr. Edward Sullivan and 2018’s The Art of Haiti: Loas, History, and Memory by Dr. B. Anthony Bogues, Bordering the Imaginary presents a dialogic exhibition of art that engages Hispaniola’s history from both sides of the island. It also responds to their shared colonial legacy through artistic intervention. The exhibition asks us to meditate upon the impulse to construct borders—ideological, political, and territorial—and on the ways that borders serve to repeat history for nations that are already compromised by their origins at the intersections of power and oppressive hierarchies of race, gender, and sexuality. Indeed, a major narrative thread in Bordering the Imaginary is the Trujillo dictatorship’s continuing the Spanish colonial project of racial hierarchy, reinforcing in the political imaginary a colorist dichotomy between the Dominican Republic and Haiti that continued to negate blackness as a standard of beauty and humanity. Some of the questions that arise from the exhibited works include who and what has benefitted from borders between the Dominican Republic and Haiti when the works exhibited show the physical and psychological violence inflicted upon those who were othered by histories of bordering? How do the strategies of assemblage, documentary, and photography deployed in this exhibition offer us ways of visualizing the compounded effects that histories of racialization, gender stereotyping, and power structures have had upon Caribbean diasporas in the U.S.? The U.S., after all, has strategically bordered the archipelago through aerial (embargo, travel bans), liquid (through the 2001 Third Border Initiative), and terrestrial (again the embargo, the ongoing rhetoric of a border wall) means. And as the calls for borders grow ever louder in the twenty-first century, Bordering the Imaginary begs the question: can we actually learn from colonialism’s ongoing effects when the act of bordering has been a defining part of imperial infrastructures? Especially when we have yet to manifest a reimagining of our world without them. As Hyperallergic quipped, it’s complicated2 and the exhibition shows this through visual dialogue that offers no easy or immediate answers but rather requests that viewers spend time reflecting on their histories’ entanglements.

It is unfortunate that Bordering the Imaginary is only on exhibition through April 29, especially considering that New York is home to the largest Dominican Republican diaspora and the second largest Haitian diaspora in the U.S. As we’re learning from the High Museum’s example,3 extended exhibition periods support access for diverse audiences that may not be connected to gallery’s and museum’s main communication channels. Such audiences reflect the U.S.’s growing demographic diversity. Visitors should plan on going soon, often, and with friends in tow before Bordering the Imaginary closes.

Xuxa Rodríguez is a 2017-2018 Smithsonian Predoctoral Fellow at the Smithsonian American Art Museum and a Ph.D. candidate in Art History at the University of Illinois at Urbana-Champaign. Her dissertation, Performing Exile: Cuban-American Women’s Performance Art, 1972—2014, examines contemporary Cuban-American women's performance art within the context of U.S.-Cuba diplomatic relations of the late 20th century. She has served as a 2016-2017 Foreign Language and Area Studies Fellow, a 2014 Smithsonian Latino Museum Studies Program Fellow, and a 2013-2016 Graduate College Distinguished Fellow at the University of Illinois at Urbana-Champaign.