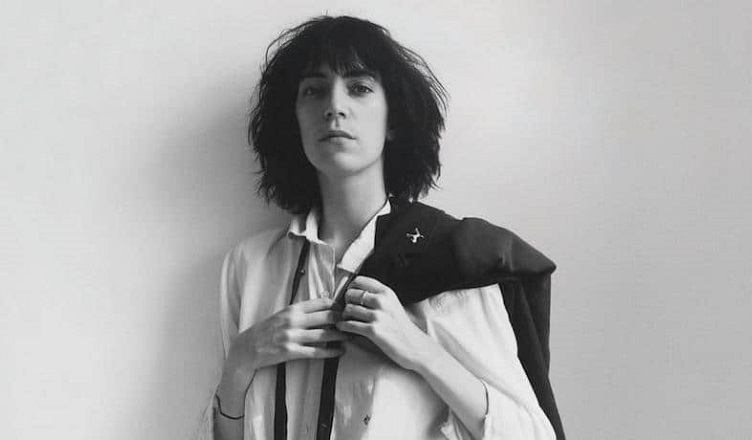 Daniel Kane, Do You Have A Band? Poetry and Punk Rock in New York City. New York: Columbia University Press, 2017.

One day in the summer of 1977, poet Eileen Myles descended with a group of her friends and fellow poets into a basement laundromat in SoHo, where they spent an hour performing their work, filming each other, and putting things they shouldn’t have into the washing machines (ketchup, a banana). “What is blue? What is yellow? What is your favorite kind of music?,” Myles asked, in one poem, before storming off camera; later, Rose Lesniak intoned, “poetry is in the lungs of all of us,” and was greeted “not with applause but with an overwhelming burst of hacking and coughing,” as the group roundly mocked her hokey replication of Charles Olson’s “Projective Verse” (189-90). Aggressive, playful, and unruly, as well as literally underground, the Laundromat reading, as Daniel Kane suggests, “revealed a young group of poets undermining their own genre by performing like iconoclastic punks”: the event was “a great big fuck you to intensity, to the purported immediacy of a performed poem, to poetry itself, even as it was a celebration of it” (190).

By this point in the year, Television’s Marquee Moon and the Clash’s self-titled debut had been released, while Richard Hell and the Voidoids’ Blank Generation, the Sex Pistols’ Never Mind the Bollocks Here’s the Sex Pistols, and the Ramones’ Rocket to Russia were imminent. Patti Smith’s Horses and Radio Ethiopia still loomed large in punk rock’s rear view mirror, having been released in 1975 and 1976 respectively. Kane draws our attention to these releases in relation to the Laundromat reading partly because a number of the band members (Richard Hell, Tom Verlaine, and Patti Smith in particular) were associated with the New York School poetry scene in which Myles and co. were coming of age, and partly because by this point in the 1970s “punk bands were showing the way to some New York School poets looking to get out of the quotidian poetics” of their creative elders, such as Frank O’Hara (169). This reciprocal relationship between poetry and punk rock—the subject of Kane’s book—energized New York City’s already “performance-oriented downtown scene” (14) from the early 1960s onwards, as poets and punks inspired each other in their assault on “the excesses and naiveté of the counterculture” (38).

Myles was not the only poet looking to punk for ways to interrogate and unsettle her chosen art form. Elinor Nauen, Maggie Dubris, and Rachel Walling, for example, who were “as active in the music scene as they were in the poetry world” (177), put together a short-lived, heavily punk-inflected journal called Koff, the aim of which was “the refutation of poetic lineage” (182). The fourth and final issue simply took the form of a T-shirt emblazoned with “the dead poets who didn’t get buried”: Ezra Pound, William Carlos Williams, Arthur Rimbaud, and a two-headed hybrid of Frank O’Hara and Allen Ginsberg, each of whom was adorned with a bullet mark (185). Dennis Cooper, now known primarily for his novels, riffed on and repudiated O’Hara’s casual erudition, replacing jazz with pop-punk, Billie Holiday with Debbie Harry. He too inaugurated a DIY journal, Little Caesar, which Kane describes as “essentially a punk New York School poetry magazine” and which “broke new ground in its basic, untheorized assumption of affinity between poets and musicians” (208). “We want a magazine that’s read by the Poetry fans, the Rock culture, the Hari Krishnas, the Dodgers,” Cooper wrote in his introduction to the first issue.1 Cooper, Kane shows:

forged new connections between artists and genres circulating traditionally within separate cultural economies . . . . By pulling underground poetry into a shared spotlight enjoyed by pop-punks, Cooper staged a populist takeover of postmodern poetry, liberating it from what by the late 1970s and early 1980s had already become its institutionalized academic and critically approved home and dragging it, metaphorically, to New York’s CBGB and the Mudd Club, LA’s Masque, London’s Roxy and 100 Club. (213)

Jim Carroll, finally (and in a slight reversal of the punk-to-poetry trend), a long-time New York School affiliate, released the hit single “People Who Died” in 1980, the inspiration for which was Ted Berrigan’s 1969 poem also called “People Who Died.” As Kane puts it, “the New York School poem became the song the million punk kids sang together” (224).

Do You Have A Band? is an energetic cultural history that persuasively confirms the influential entanglement of New York’s music and literature during the 1960s and 1970s, eliding the divisions between page and stage and emphasizing the importance of the city’s physical, social, and creative environments. As Kane observes in the early pages of his book, “much of what we hold so dear in poetry and punk from the 1960s on owes a debt to models first hashed out on Manhattan’s streets and in its clubs, poetry performance spaces, mimeographed magazines, and community newspapers” (6). Such an argument is relatively familiar,2 and certainly the Beat, French Symbolist, and (to an extent) modernist influences on Lou Reed and Patti Smith in particular are reasonably well-documented, as is the sense that, from the 1960s onward, poetry was as much “an open-minded approach to daily life and a cool, sexy look” (45) as it was a genre. However, where Kane breaks important new ground is in his specific and emphatic claim for the mutual significance of the New York School and the St. Mark’s Poetry Project for punk’s most noteworthy practitioners. Over the course of eight lively chapters, Do You Have A Band? reveals the ways in which musicians “were drawn to the Poetry Project and created music in part as a response to, argument with, and extension of New York School poetics” (89). Along the way, Kane uses a range of close readings of work by figures including Ted Berrigan, Eileen Myles, Aram Saroyan, Richard Hell, Michael Brownstein, Lou Reed, John Sinclair, Dennis Cooper, Jim Carroll, Anne Waldman, Patti Smith, and John Giorno (as well as several collaborative and hoax pieces) to make the case for the reciprocal influence of punk rock on New York School poetry. And behind it all, variously emulated and repudiated, as Kane shows, is Frank O’Hara, who had “set the punk stage in his mock manifesto ‘Personism’ by stripping shamanic authority from the poet” (14).

Kane’s montage is expansive and includes poets and punks ranging from the iconic to the truly underground. Poet and proto-punk Ed Sanders (known for his mimeograph Fuck You: A Magazine of the Arts), who begins Kane’s narrative, launched his strange, rambunctious band the Fugs in the early 1960s, in an effort to create “a world and audience in which the reader of innovative poetry would be the same consumer of the latest mass-market and simultaneously radical rock’n’roll record” (27). Before long, Lou Reed, Jim Carroll, Richard Hell, and Patti Smith had all given performances at the Poetry Project, each (to varying degrees) “hankering after the gravitas afforded the poet” (67). Punk venue CBGB inaugurated Wednesday-night avant-garde poetry readings in the Poetry Project tradition. Angel Hair magazine, edited by poets Anne Waldman and Lewis Warsh, “invited future musicians to revise clichéd notions of the poem as inextricably bound to a monologic lyric voice, proposing the poem as something created together with others—the poem as song produced by a band” (74). Waldman and Smith explored shared modes of performance “that blurred the lines between poetry, performance, and the call-and-response ethos of rock’n’roll” (88). John Giorno founded a pirate radio station in the bell tower of St. Mark’s Church and moved to recording his poetry on vinyl in order to refute the notion that “the poet was physically bound to the page” (149): real performance poetry, according to Giorno, was like punk rock, noisy, collaborative, and entertaining. 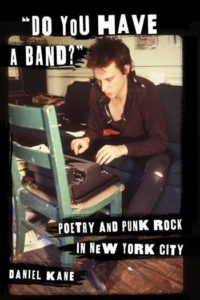 As far as an academic book can be, Kane’s is punky and irreverent. His writing is of a piece with his subject matter, and is often witty or demotic, his arguments ranging from the casually observed to the borderline polemical. This, combined with his extensive and meticulous research, which includes fascinating archival material and first-hand interviews with many of the figures under discussion, renders Do You Have A Band? both intellectually rigorous and profoundly enjoyable. It is also an important interdisciplinary addition to the growing body of exciting work on the New York School.

Rona Cran is Lecturer in Twentieth-Century American Literature at the University of Birmingham. She is the author of Collage in Twentieth-Century Art, Literature, and Culture: Joseph Cornell, William Burroughs, Frank O'Hara, and Bob Dylan, and has also written articles on William Burroughs, Allen Ginsberg, Frank O'Hara, Richard Yates, and Joe Brainard. She is currently working on a cultural history of New York City from the counterculture to the AIDS crisis, tentatively titled Multiple Voices, which explores the relationship between neighborhood change and the poetry written during the period.