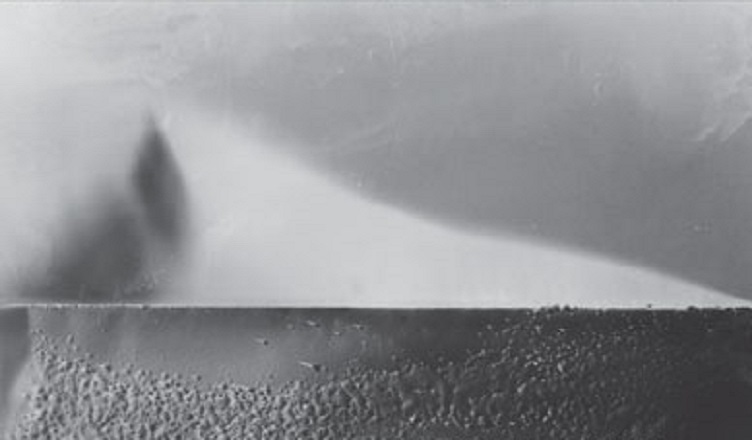 Detail from cover of Ecology without Culture. © University of Minnesota Press

Its agile survey of ecocritical responses to toxicity notwithstanding, Christine L. Marran’s Ecology without Culture: Aesthetics for a Toxic World (2017) levels most of its lasting claims in relation to the arts of the present. Her book examines a fascinating archive of Asian literature and film, with Marran bridging genres and media by way of a meticulous critical terminology she develops throughout her text.1 The close readings that emerge alongside Marran’s concepts of “obligate storytelling” and “optics of ambulation” are the most compelling aspect of the book—so much so that one wonders if Ecology without Culture sometimes buries its lede. Given Marran’s subtle analyses of those touchstones that have come to define contemporary Asian aesthetics—from Tsuchimoto Noriaki’s 1971 Minamatä Medical Films to Wu Ming-yi’s 2014 novel Man with the Compound Eyes—the book’s self-proclaimed intervention within the tired nature/culture binary feels somewhat less urgent. This is by no means intended to suggest that the discussions of aesthetics, modes of storytelling, or optic patterns do not bear upon ecological thinking. Rather, Marran’s direct treatment of toxic aesthetics represents a far more urgent intervention in the study of literature than the book’s largely summative accounts of ecocriticism and ecopolitics. In the end, Ecology without Culture marks a necessary departure from the familiar ecocritical reading praxis, forecasting where the field of “environmental humanities” might direct future inquiry: namely, toward a toxic aesthetics that characterizes the meeting point of cultural humanism and a newfound regard for the material world that supports and makes possible that humanism.

What Marran calls “obligate storytelling” is a perfect example of Ecology without Culture’s core achievement. The phrase denotes “a kind of storytelling that emphasizes the bond, the fetter, the bowline, the ligare, of one being to another at the level of care and substance, of thought and matter” (27). Extending this frame, Marran shows how toxicity actually constitutes this “bond” or “fetter,” offering literature the opportunity to imagine the shared suffering of others—a process literature already offers but which Marran helps label and situate. In one of her most poignant and incisive examples, Marran discusses Ishimure Michiko’s 1997 novel Lake of Heaven, where a new dam—a clear metonym for the industrial modernity producing toxicity, and its outcomes—threatens both a local village and the insect life of a nearby lake. Moving from the human to the nonhuman with such speed and care, Ishimure’s similes take form as a relational device, indeed as a form of “obligate storytelling,” and they epitomize how “bodies get mapped through their shared voices and through the expression of likenesses among beings” (46). Though all narrative is of course produced by relations and figurative devices such as similes and metaphors, Marran makes a case for why “obligate storytelling” deserves to be thought of as a category all its own—a category that perfectly summarizes what she means by “aesthetics in a toxic world.”

“Obligate storytelling” is also a way in which the book’s aesthetic discussion and ecocritical architecture seem to be at odds with one another. Whereas this narrative technique articulates a relationship between “care and substance” and “thought and matter,” it does so by employing human language, with its many cultural tropes and associations. Ecology without Culture, in other words, is a product of precisely our scholarly moment, where if the future of ecocritical thinking is at times unclear, the need for interrogating the aesthetic traditions uprooted by ecocriticism has never seemed more important. At its most salient, the study allows us to see a vast network of texts that reconceive and redefine what Marran identifies as “the poisons of industrial modernity” and “the agency of toxins that ground these literary and filmic stories” (24–5). In summoning an “aesthetics for a toxic world” by way of its subtitle, the book confronts how toxicity reveals the convoluted relations of nature and culture. Toxicity, that is, cannot be a strictly material concept because it already begs a cultural and philosophical question: “Toxic for whom or what?” If we commit to “obligate storytelling,” and take seriously the idea of imagining a world “without us,” then we must also imagine that what is “toxic” for one species may not be for another, or, more troublingly, that what is “toxic” is contingent upon scale, dose, or scope, relative even within species. The very category of toxicity points out a fault line in those strains of ecocriticism that rest upon the assumption that the nature/culture binary is stable, and that our work should move beyond the “merely” cultural.

Therefore, when the text turns toward its expressly ecocritical stakes, eschewing the cultural or linguistic imbrications of the toxic image, the move calls into the question its consistency with a discussion of “obligate storytelling.” What is perhaps most troubling about the book’s discussion of ecocriticism is its deep and in fact titular engagement with Timothy Morton’s Ecology without Nature (2007).2 Marran writes,

Morton’s notion of a “properly ecological form of culture” seems a contradiction in terms. If the biological world is analyzed with a view toward culture, even a “properly ecological” one, then ecocriticism privileges the cultivation of the human world as its subject. Perhaps the chief stumbling block to ecological thinking is not the image of nature, but the image of culture. Cultural humanism, historically, has drawn on the material world for a constellation of metaphors to serve human interests and to generate processes for human groups to master themselves through self-consciousness and historical action. (3–4)

Marran’s critique of Morton appears to take issue with his assumption that culture must feature in human regard for and decisions concerning ecology. Insofar as Morton takes “Nature” to task as a cultural construct, his 2007 monograph already implies an “ecology without culture,” with the notable caveat that his work foregoes the utopian possibility of actually existing apart from human social institutions and its attendant theorizations. Therefore, Morton’s argument seems less a “contradiction in terms” than an incomplete—or at least early—account of the dynamic relationship between nature and culture that ultimately produces our aesthetic traditions. Rather than contest Morton’s solution to the problems posed by the nature/culture binary, Marran is far better served by questioning the efficacy of such a binary in the first place, as she naturally does throughout the rest of her study.3

For instance, Marran clearly appreciates the limits of a strictly materialist approach when outlining her concept of the “biotrope,” a term that addresses how biological substances are necessarily shaped by both material and semiotic forces (6). Much like “obligate storytelling,” the “biotrope” richly cuts across the nature/culture binary by conceding the co-constitutiveness of cultural associations and material formations, and as such, seems to intuitively challenge the idea that there can be “ecology without culture.” While the process of imagining an “ecology without culture” consequently results from cultural humanism, testing those metaphors, tropes, and patterns that inform humanism urgently updates Morton’s project from over a decade ago. That Marran sets out to revise Morton’s framework by troubling ecocriticism’s relationship to the aesthetic rendering of toxicity shows the full potential and importance of this book. 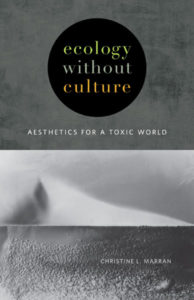 A microcosm of the study writ large, Marran’s second chapter, “Slow Violence in Film,” reconceptualizes Rob Nixon’s Slow Violence and the Environmentalism of the Poor (2013) in light of film, a medium that powerfully documented the aftermath of toxic events like Hiroshima and Fukushima.4 One of her central case studies is Tsuchimoto’s Nuclear Scrapbook (1982), a film that “presents shot after shot of thirty-seven years’ worth of newspaper articles about radiation-related events around the world” (82). Attentive to the way in which these newspaper pages, referencing concrete historical moments and events, simulate a passage of time, Marran shows how film and media can help viewers actually experience and grasp the “slow violence” of radioactive toxicity. Furthermore, in its nearly avant-garde style, Nuclear Scrapbook challenges viewers to consider the affordances and limitations of film in relaying such static images. (Why not just publish a book with these article photocopies, for example?) As Marran rightly puts it, “the two-dimensionality of the newspaper interrupts the indexicality of the filmic image” (83). Such a comment returns us to aesthetics, and implies high-level formal and medium-specific questions that become something of a motif in Ecology without Culture. What do environmental literatures and criticism offer in terms of the aesthetic traditions out of which they emerge? How can we view ecocriticism as a complement, rather than a challenge, to the conventions, tropes, and artistic principles that have a hand in producing these texts? At the last, Ecology without Culture makes an implicit albeit clear argument for why ecocriticism is articulated most clearly when placed in the context of a close reading praxis that takes seriously the idea of aesthetics.

Clint Wilson III is a PhD student at Rice University in Houston, TX. Drawing on the intersection of critical media studies and biopolitics, his project explores how conceptions of "toxicity" influenced the trajectory of twentieth-century art and literature, and vice versa. His work has appeared or is forthcoming in Eighteenth Century: Theory and Interpretation, Resilience, and Environmental Philosophy.