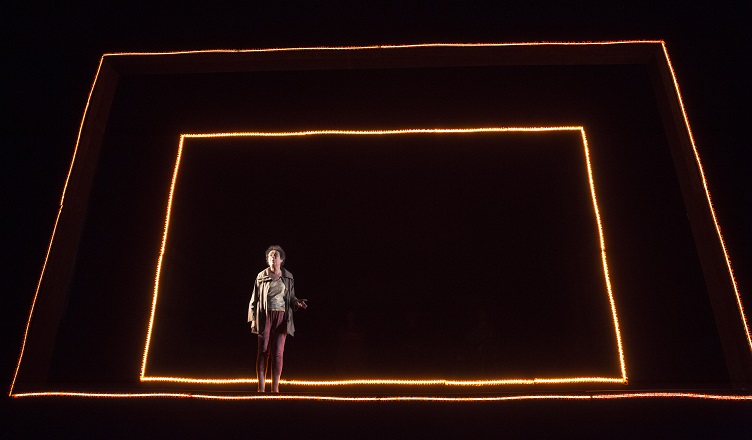 Actor Samuel West recently dubbed Caryl Churchill the “David Bowie of contemporary theatre,”1 a sobriquet used on promotional materials for the US premiere of Churchill’s new play, Escaped Alone, which opened at the BAM (Brooklyn Academy of Music) Harvey Theater on February 15. The comparison is apt, for, like Bowie, Churchill has continually reinvented her aesthetic style while challenging the performative and political status quo for almost sixty years. With all due respect to the Starman, however, Caryl Churchill is the Caryl Churchill of the contemporary theater, and, at seventy-eight, Churchill is still experimenting and still producing plays that challenge audiences and artists alike with their inventiveness as well as their social and political bite.2 Escaped Alone, a play that presents the horrors of the apocalypse with humor and aplomb over a spot of tea, offers yet another of her unflinching examinations of current socio-political anxieties and their deeply personal effects on individual lives.

Upon entering the theater for this Royal Court Theatre production3 directed by long-time Churchill collaborator James Macdonald,4 audiences encountered a stage dominated by a closed gate in a high wooden fence. The fence, which blocked the view of anything onstage other than a vast expanse of gray-blue horizon and the barest suggestion of greenery behind the slats, was framed by a stark proscenium of two black rectangular borders—the inner border smaller than the outer border—lined in vibrant red hatching. The initial effect of this design by Miriam Buether was unsettling, as the eye was drawn to the stage by the target the frames created but also repelled by the high fence which obstructed any clear view of the stage itself. It placed the audience into the role of Peeping Tom, a move that was reinforced by the production’s opening moments in which Mrs. Jarrett (Linda Bassett), like the audience, was caught eavesdropping on the women in the garden beyond.

The play’s premise is rather straightforward: three old friends, Sally (Deborah Findlay), Vi (June Watson), and Lena (Kika Markham), are joined in Sally’s backyard by her neighbor Mrs. Jarrett for tea and conversation. Described by Churchill as “at least seventy,”5 the women sit in “unmatching chairs”6 and discuss everything from the banalities of haircuts and shopping to the deeply rooted anxieties that affect each of their lives. The unsettling obstruction of the initial stage picture is mirrored in the Beckettian language, with dialogue beginning mid-thought, ending abruptly, or meandering as ideas are suggested, picked up, and discarded in seemingly haphazard fashion. Churchill has a long history of experimenting with language and forms that emphasize the thematic focus of her plays. For example, the famously overlapping dialogue in her 1982 play, Top Girls, reflects the zeitgeist of the feminist movement of the early 1980s, underscoring both the diversity of the perspectives held by different women in the play and each character’s desperate attempts to be heard over the voices of others. Love and Information, Churchill’s 2012 play about finding connections in our fast-paced information age, is structured as 57 micro-plays with a cast of over 100 characters; the dialogue in the seemingly disconnected scenes thus enacts the fractured way we encounter relationships and absorb information in the era of digital media.

Not only does the meandering conversation in Escaped Alone reflect the fragmented nature of memory and the experience of trauma; Churchill also displays a dialogic attunement to our present moment as the conversation is continually interrupted with monologues by Mrs. Jarrett detailing apocalyptic visions of starving children and ruined cities exploited by reality TV and gas mask companies. These monologues were marked in the production by sharp changes in lighting and sound as Mrs. Jarrett stepped out of the frame (the first frame, at least) to address the audience directly. Peter Mumford’s lighting design surrounded her in total darkness in these moments, lit only by violently strobing red lights on the proscenium frames, and the sound design by Christopher Shutt added an electrical hum that gave the distinct impression of increasing amperage. The lighting also marked the moments when each of the other three women detail their own personal horrors, including Vi’s feelings about killing her husband, Sally’s anxiety over cats, and Lena’s inability to leave her home. While the other characters never broke the frame of the stage as Mrs. Jarrett did, the lights would cool and focus on the speaking individual, dimming the others in a washed-out gray.

Like the dialogue and the set, time also shifts and overlaps. Churchill herself notes in the stage directions that the action occurs on “a number of afternoons but the action is continuous,”7 but there are few clues or cues about chronology as the piece plays out.8 How, exactly, do Mrs. Jarrett’s monologues, for example, relate to the backyard discussion? Are they monologues about true events that are currently happening or have already happened? Are they prophetic musings? Paranoid ravings? Are they real? Are they theater? As in the first half of her play Hotel (1997), in which eight different hotel rooms exist in one space, in Escaped Alone all afternoons bleed into one afternoon; future prophecy and past horror blend into one long nostalgic ritual of afternoon tea.

The effect in this production was of a highly-choreographed cacophony, with individual voices transected by sounds of sirens or birds and descriptions of apocalyptic despair. While this might suggest a chaotic isolation and hopelessness, the production deftly allowed the individuality of each character’s anxieties to come together with the others in a startling harmony. Escaped Alone underscores such choral convergence when the women literally harmonize in an impromptu song; in this production, the women sang a strikingly beautiful version of The Crystal’s “Da Doo Ron Ron.” In fact, for a play saturated with anxiety and reports of catastrophe, the production was remarkably funny and surprisingly heartwarming. Churchill has historically used laughter to great effect in order to engage her audiences with transgressive, challenging, and dangerous material,9 and Escaped Alone employs humor in a similar manner. Laughter, terror, and rage inhabit the same aural and visual space, overlapping until one is barely discernable from the other. Shutt’s sound design highlighted this overlap, allowing, for example, sounds of children’s laughter to subtly shift to screams and back again. The tongue-in-cheek delivery of details about the grim reality of starvation, disease, and death in Mrs. Jarrett’s apocalyptic monologues underscores the absurdity of both the global suffering she describes and the individual sufferings of the characters in Sally’s backyard. Stylistically, the combination of humor and human suffering echoes the absurdist work of Samuel Beckett; the play’s theatrical quality could easily be compared to the juxtaposition of vaudeville silliness and suicidal despair in Waiting for Godot, or the timeless purgatory in which three characters tell and re-tell their stories in Play.

The quote from which the title of the play is taken, “I only am escaped alone to tell thee,” invokes shared tales of human suffering in both its original occurrence in the biblical Book of Job and its use by Herman Melville in the epilogue to Moby-Dick.10 The use of this phrase is evocative; as in Churchill’s play, the biblical story features Job and his three friends sitting together and talking about divine justice and human suffering after Job loses his property, wealth, and family thanks to Satan’s meddling. While Churchill’s play does not directly pose a theological question, it does similarly consider human suffering as experienced through the stories of the four women, each of whom, in her own way, has escaped alone to share the story of her personal suffering. Rather than questioning God, Escaped Alone uses social and political commentary (as, for example, remarks about fascism and America join scathing comments about the inhumane effects of reality TV) to implicate the foundational structures of contemporary society. Churchill’s play may be a parable, but it is also a prophecy that challenges the socio-political underpinnings of our own global struggles.

Kerri Ann Considine is a PhD candidate in the English department at the University of Tennessee and a Graduate Fellow in the UT Humanities Center. She is currently finishing her dissertation, entitled Mediating Machines: Human Mechanisms and the Modern Stage, which focuses on modern theatrical experiments that cast live bodies in the role of machines or mechanical bodies. In addition to teaching in both the Theatre and English departments, Kerri works as a dramaturg with the Clarence Brown Theatre.