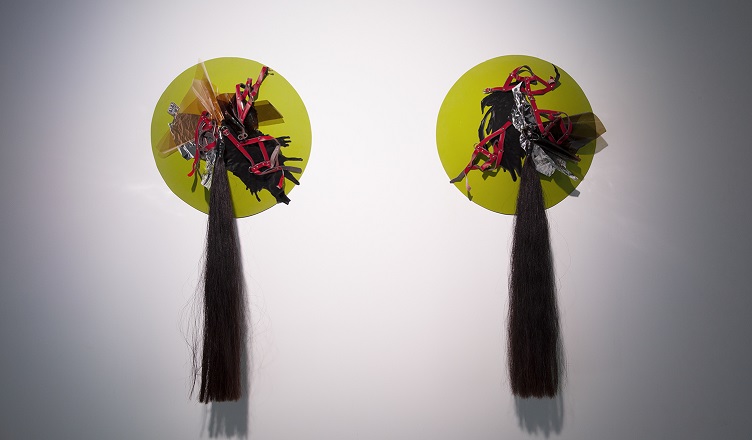 Staccato sounds tick like a metronome from an old-fashioned television monitor at the center of the gallery. On the screen is a close-up of ominous heels jump clicking against the floor. On top, another smaller screen shows breasts with pasties twirling tassels in rhythm with the heels but no face, summoning a body that is both exposed and withheld. The piece, Ya Estuvo (I Was Here, 2016), reminds us of Ibarra’s burlesque period where timing and titillation are central to seducing the viewer. But what this piece robustly shows us is the way that Forever Sidepiece, Ibarra’s solo show at the Knockdown Center, injects and catalyzes pleasure thus transforming and moving the body beyond racialized constrictions.

Throughout the exhibit, Ibarra severs herself from the normative gaze that objectifies her as only body, as only race. She illustrates her fatigue at forever being a “sidepiece” to the projections that accompany Latinidad, projections made tangible in cucaracha pasties, hot sauce, and penetrated piñatas. These compressed modes of racialization act as a form of “drag” in both senses of the word—they frame Ibarra, impeding her ability to be legible outside of its parameters, while simultaneously offering a form of cover, a place to play.

Giving us a sweeping historical arc of Ibarra’s work, Forever Sidepiece challenges these racial confinements. A line of video monitors presents her early campy queer performances as La Chica Boom. In these pieces Ibarra wears elaborate costumes and interacts with classically “Mexican” objects; she inhabits the Virgin de Guadalupe, she dominates a piñata, and she uses underwear as tortillas. In these performances sex renders the objects humorous, indicating familiarity and the intimacy that occurs when form stretches toward absurdity.

Forever Sidepiece indexes the seeming sedimentation of racialization, both in the ways of habitualized perception and the production of identity as trope. In later pieces, Ibarra obscures portions of her body, opening an unidentified space of possibilities within racial reductions. Spic Jouissance Bottle (Tapatio Cock) and Mexi Strap-On Harness refer to items that she might wear for a performance, but do not feature her, an absence that is narratively explained by the lighted Fuck My Life sign, referring to Ibarra tiring of the representational burden of performing as La Chica Boom. The phrase itself interpreted in three different ways elaborates Ibarra’s processing of racial fatigue:

FUCK my life = fuck it up or shedding identity constrictions

Ibarra discards congealed forms of racialization by showing us multiple moltings; we can tell that trope-ic skin has been peeled by object debris—in the cucaracha suit next to her in a pool, the box of heels and costumes, the videos, Tapatío sauce, the harnesses aligned against the wall. Ibarra herself provides a contrast to these static forms of projection and shows us the possibility of transforming into an empowered version of oneself that emerges through a body less contained by established racial dynamics. Here, racial drag drags race. What happens to minstrelsy when the objectified plays its own object? A self shattering or a social shattering or both? Ibarra reveals racial projection for what it is—a projection and not the self. By revealing and playing with her racialized identity Ibarra is able to create a space to be removed from it.

The next phase in Ibarra’s work is the most explicit about her rejection of ready-made racial concepts and the ways it solidifies into a fetishized gaze. Turn Around Sidepiece, a video made in 2018, shows Ibarra naked and wearing only sneakers while on a rotating rock. As the rock moves, Ibarra athletically adjusts her poses to reject the camera’s eye. Basically running circles through references to variations on the odalisque, Ibarra eventually tires and sits wide-legged with her hair obscuring her face. Her sculptures also feature abstracted versions of Ibarra—there are tassels and a fur coat, hair extensions, and broken lights—like ritual objects of an exorcism via racial drag. Because Alexis Wilkinson’s curation gives us a broad arc of Ibarra’s career, we have been familiarized in how to read these objects, thus enabling us to more fully recognize how Ibarra uses them to index racial projections. Replacing her body with objects offers a commentary on the particular forms of objectification that her racialization summons. Likewise, her artful disavowal of the gaze shows us what it means to suggest race as piecemeal? As outmoded? As something that drags us back and attempts to hold us down? Forever Sidepiece gives us a way to think about race as an object separate from the body, a way to think about it as something tangible, especially when it is encoded in objects, but also the body as something else outside of it.

This something else, Ibarra suggests emphatically, is pleasure. Molting offers transformation and forms of bodily agency that open into other forms of pleasure. It is a new body beyond the constricts of a colonized time that imagines race to be static identifiers. Forever Sidepiece presents us with multiple forms of pleasure in being a body while strategically withholding it from our view. While pleasure is visually enigmatic, Ibarra announces its circulation through her multiple references to its sexual form—the Virgin Guadalupe orgasms with a Hitachi Magic Wand, Ibarra tops Amber Hawk Swanson in Untitled Fucking. Objects are also recontextualized and re-layered as in the Tapatío hot sauce bottle re-purposed as a dildo.

Numerous strategies of pleasure emerge from Ibarra’s work to subvert racialized assumptions: the last moment of Turn Around Sidepiece is not only one of fatigue but also of defiance at finding a restful posture that bypasses the camera’s gaze; the sculptures offer cheeky callbacks to Ibarra’s previous work while also presenting the sensual enjoyment of an unraveled weave that both caresses and acts as a whip. In Forever Sidepiece, Ibarra asks us to think about what pleasure is and what happens when one takes ownership of one’s body, transforming it to exorcize and move beyond racial subjugation.

Amber Jamilla Musser is Associate Professor of American Studies at George Washington University and the author of Sensational Flesh: Race, Power, and Masochism (NYU, 2014) and Sensual Excess: Queer Femininity and Brown Jouissance, which was published by NYU Press in 2018.