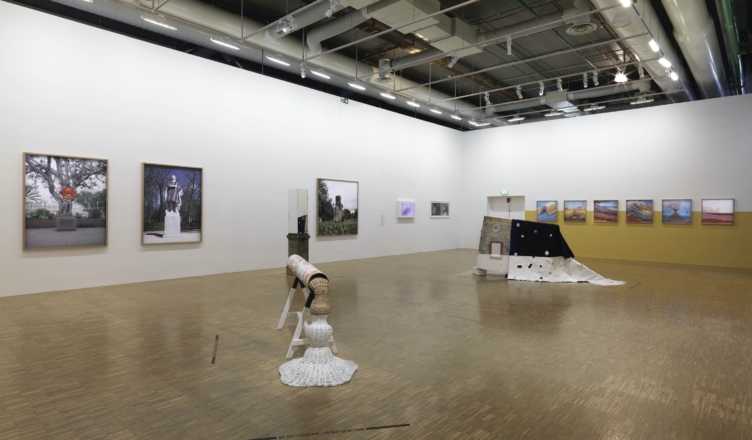 As notions of “the global” increasingly shape both our lived and discursive contexts—think, for instance, of global supply chains or global histories—the term’s paradoxical impulses towards the universal as well as the geographically particular are evermore manifest. Presenting over 100 works by more than 60 artists primarily from the so-called Global South, Global(e) Resistance showcases the Centre Pompidou’s recent acquisitions, and in so doing, grapples with the inherent ambiguities of “the global.” Through the lens of resistance, which critically engages ideological critique and questions related to colonial legacies, environmental degradation, and gender stereotypes, curators Christine Macel, Alicia Knock, and Yung Ma illuminate the contemporary artistic landscapes of Africa, the Middle East, Asia, Latin America, and their diasporas. While its focus on nonwestern artistic practices recalls the famous yet controversial 1989 Pompidou show Magiciens de la Terre, Global(e) Resistance speaks to current urgencies as museums across Europe and the United States face mounting pressure to confront their Eurocentrism and longstanding institutional biases. Situating the exhibition within this broader self-reflexive atmosphere, Macel calls for museums “to open up to diversity and become places for transversality, places where a new, non-hegemonic and inclusive universal can be considered.”1 Global(e) Resistance sets both the potentials and perils of such approaches into relief.

The exhibition both builds on and departs from the themes explored in two video works already held by the Pompidou that frame the installation: Coco Fusco and Guillermo Gómez-Peña’s well known The Couple in the Cage: Guatinaui Odyssey” (1992-1993), and Renée Green’s Partially Buried (1997). In the first, Fusco and Gómez-Peña present themselves as newly discovered “Indians” from a fictitious land. Alluding to display practices of nineteenth-century world’s fairs, they interrogate the regimes of domination at the core of Europe’s colonial past, including its notions of leisure. Green, on the other hand, investigates the intersections of memory, activism, and monuments. In revisiting the site of Robert Smithson’s site-specific action-turned-memorial at Kent State University, she films her own discovery process of “unearthing” the ways in which Smithson’s 1970 action to partially bury an existing house became a commemorative site for the university students infamously killed on campus by the National Guard that same year. 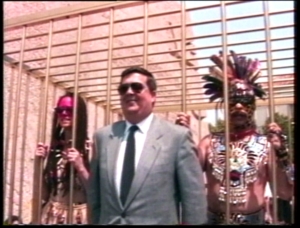 The newly acquired works installed across the museum’s fourth floor recalibrate and expand the issues set into motion by each video in light of divergent cultural, temporal, geographic, political, and social contexts. Connections to the present moment are further emphasized by Barthélémy Toguo’s stamped slogans interspersed throughout the walls of exhibition. Part of the Cameroonian artist’s Urban Requiem (2015-2019) series, these indices of popular protests reference racism, abortion, and other contested topics. With these phrases signaling Black Lives Matter, the AIDS crisis, and trans rights, national contexts are called to mind only to be quickly displaced into a broader human struggle against injustice.

Global(e) Resistance groups works both by geographic location and by thematic interest; the strengths of the museum’s collection thus appear as much to respect national boundaries as to transcend them. Visitors are invited to examine the various facets of a single geographical site while concomitantly forging cross-cultural connections by means of resonances in subject matter and medium occurring inside and across individual gallery spaces. In the case of South Africa, for example, a room of works by artists including Penny Siopsis, Kemang Wa Lehulere, Sue Williamson, and David Koloane offers viewers a concentrated, yet variegated reflection on apartheid and its aftereffects. While Koloane and Wa Lehulere variously metaphorize the country’s violent past through canine imagery, Siopis and Williamson manipulate the archive to expose hidden histories of both political resistance and betrayal. In a nearby gallery, the South African context figures within a wider reflection on the existing built environment. Here, the photographic series Ponte City (2008-2013) by Mikhael Subotzky and Patrick Waterhouse, dedicated to Johannesburg’s tallest residential structure erected in 1975, dialogues with Cheikh Ndiaye’s 2015 realist oil painting, Cinéma ABC, Dakar. Part of a series focused on dilapidated movie theaters in Senegal and the Ivory coast, Ndiaye’s canvas captures the effects of time and the ways in which communities can reclaim and repurpose extant structures. In a related register, Subotzky and Waterhouse’s images also record the socio-temporal effects of human presence within and around Johannesburg’s prominent landmark. 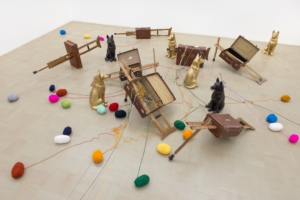 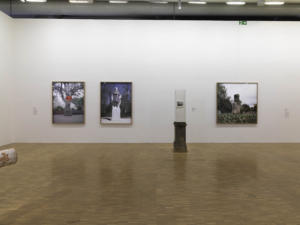 Beyond monuments, the ongoing economic abuses of colonialism further motivate the practices of the artists in the exhibition. In the photomontages of Sammy Baloji, created in 2006, archival and present-day photographs of Lubumbashi are superimposed to highlight the exploitative history of mining in Congo from the colonial period up to the current era. Thu-Van Tran, on the other hand, turns to installation to address French extraction of Vietnamese rubber in The Red Rubber #2, of 2017. Alongside a site-specific painting and a video, wax casts of rubber trees lie atop wooden crates to expose the uneasy connections between capitalism and colonialism. Colonialism’s ongoing ramifications emerge in the photographs of Lotfi Benyelles, which document the French port-city of Calais and its substantial migrant population. In an image from 2017, Hasan, one year after leaving El Fasher, a young Sudanese man stands alone against an expanse of largely deserted beach. One can trace the roots of his refugee status to the inequalities highlighted by Omar Ba in his 2012 multimedia work, War, Power, Wealth for Some installed nearby. Deploying feathers, cardboard, and other materials on a rectangular painterly support, Ba probes colonialism’s internal contradictions by depicting a set of lungs whose airstreams and pathways develop downward towards a battle scene. Life and death, nourishment and depletion remain uncomfortably entangled both in this work, and throughout the exhibition.

Feminist concerns also traverse national boundaries. In Woman Cairo (2007), for instance, Susan Hefuna examines traditional latticed Arab screens as tools to obscure and oppress women. At the fulcrum of economic and social autonomy, Sara Ouhaddou invites unmarried Moroccan women in need of dowries to weave tapestry-like wall hangings out of rubber she sourced in local markets. While spotlighting the heavy burdens tradition places upon women, both of these artists recalibrate patriarchal techniques and products as sites for the recovery of agency and self-sufficiency. 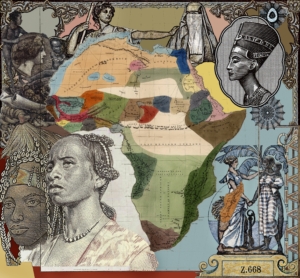 Questions of race and biological sex intersect, too, to remedy whitewashed and patriarchal narratives in other works on display. Malala Andrialavidrazana, originally from Madagascar, questions the supposed neutrality of knowledge production through photomontages combining different archival materials. In Natural History of Mankind (2016-2017), cropped portraits of Black women surround a map of Africa in a juxtaposition that honors their role in the story of human evolution. Marcia Kure, on the other hand, attends to art history’s tacit racial coding and sexual objectification in The Three Graces (2014). One of the few abstract pieces in the exhibition, this tripartite installation reimagines the Greco-Roman mythological trope through the lens of a feminist pan-African history. Using felt and other woven materials alongside colorful afro-like puffs, Kure memorializes the Dahomey Amazons, a nineteenth-century female military regiment based in present-day Republic of Benin, Ndlorukazi Nandi kaBebe Elangeni, mother of nineteenth-century Zulu leader Chaka, and Nigerian feminist activist Funmilayo Ransome-Kuti. Through abstraction, Kure reinscribes Black feminist power into the objectified, largely white visual regimes of western art. 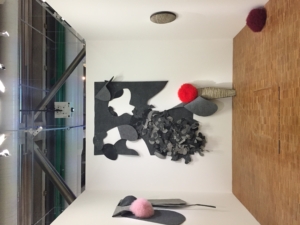 The vast range of issues explored by the artists on display in Global(e) Resistance speak compellingly to the ways in which artistic practice productively interrogates, exposes, and reimagines ideological, social, racial, and gendered hierarchies, among other salient issues of our current moment. While the ambitious scope of the exhibition facilitates a cross-cultural dialogue, it does, at times, flatten important nuances related to questions of diaspora and transnationality. Moreover, the exhibition’s somewhat universalizing lens tends to collapse distinctions among geographic contexts and cultural milieus central to the works themselves, especially with regard to specific colonial histories. In doing so, it crucially and self-consciously stages the tensions that embody the increasingly prevalent category of “the global.” Against this backdrop, the exhibition as a whole offers a rare opportunity to explore what it means to resist and challenge prevailing ideologies and colonial and patriarchal legacies across a multitude of cultural and geographic coordinates—a stance that feels increasingly pressing with each passing day.

Marica Antonucci is a Ph.D. candidate in Art History at Johns Hopkins University, where she studies postwar Italian art with an emphasis on the relations between artmaking and politics during the 1960s and 1970s. She has held fellowships at the Baltimore Museum of Art and the Bibliotheca Hertziana - Max Planck Institute for Art History in Rome.