Anna Anthropy, Queers in Love at the End of the World, 2013. Online game. Courtesy of the artist.

Anna Anthropy’s Queers in Love at the End of the World (2013) was one of my favorite artworks included in I Was Raised on the Internet. It is an online game in which the player has ten seconds, measured on a countdown clock, to navigate a series of choose-your-own-adventure options about love and longing. The first prompt reads, “In the end, like you always said, it’s just the two of you together. You have ten seconds, but there’s so much you want to do: kiss her, hold her, take her hand, tell her.” By choosing one of these actions, the player is led through various confessions of devotion before the final moment of the apocalypse. Inevitably, the clock stops, and the final screen announces the fatal blow: “Everything is wiped away.” The player may try again—read or click faster, process more information—but there is no beating the clock. Time wins; you lose.

Queers in Love teaches us about personal agency, and the fear of its slipping away, within a space and time-scale described by the internet. In the largest sense, I Was Raised interrogates the impact of the internet on how we experience the world nowadays. The exhibition also poses a narrower question—one that Queers in Love exemplifies compactly: what, to art history, shall be the modes and ways of seeing imparted by millennials?

The fact that the first word of the exhibition’s title is “I”— and, indeed, the emphasis on the word “me” in the structure of the curatorial program—indicates clearly that the preeminent impact of the internet is a thoroughgoing increase in narcissism. The exhibition is organized into five thematic divisions: “Look at Me,” on the subject of social media and identity; “Touch Me,” on the significance of the digital age for artistic materiality; “Control Me,” on surveillance; “Play with Me,” on interactivity and gaming; and “Sell Me Out,” on the ubiquity of corporations and advertising online. A few steps away from the enclosure of the galleries is the “Online Platform” (where Anthropy’s work is found, among others): a bank of computers set up to allow the viewer to experience artworks existing entirely within the medium of the internet.

The “me”-ness of I Was Raised is no surprise: pretty much everyone knows we live in an incredibly narcissistic era and that the culprit is the rampant colonization of our lives by online social media. One should consider that, nearly half a century ago, Vito Acconci tested one’s personal relationship to new forms of technology in Centers (1971), an early video artwork made when that medium had just recently come into the hands of artists. In it, Acconci points his index finger at his image in the TV monitor, the televising of which making it seem as though he is pointing at us, the outside viewer. Interested art historians will surely also know the implication of Rosalind Krauss’s indictment of Acconci in the groundbreaking essay “Video: The Aesthetics of Narcissism” (1976): seeing one’s own televised image in isolation is a form of self-obsession increasingly affecting both art and life.[1] 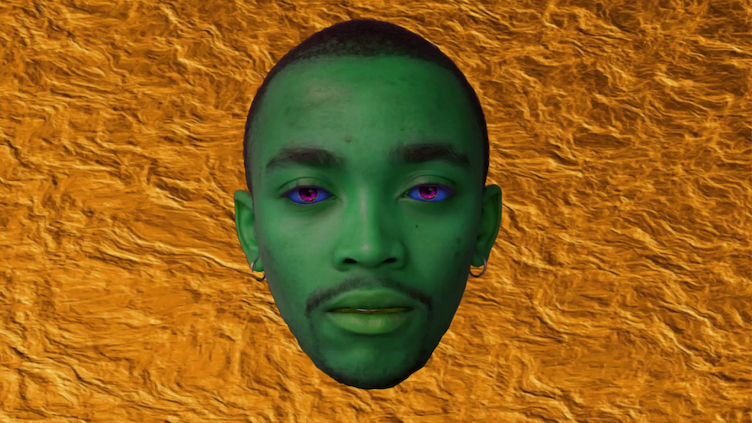 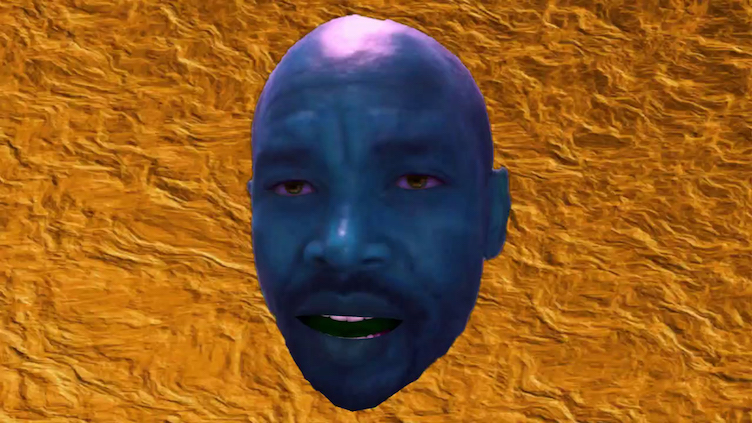 Of course, not all of the internet’s expressions of self-awareness are merely narcissistic; it also invented new avenues of self-exploration and self-presentation, which several artists represented in I Was Raised address poignantly. South African artist Bogosi Sekhukhuni’s stirring Consciousness Engine 2: absentblackfatherbot (2014) is a two-channel installation representing an actual Facebook chat dialogue between the artist and his father, whom the artist did not know until he sought him out online. Each monitor features an animated, talking avatar, whose voices “read” the chats aloud in robotic speech-text. Their small talk, and its ultimate failure to amount to a real relationship (Sekhukhuni’s father eventually “blocked” him), exposes social media’s great potential for highly personal, emotional violence. One is tempted to contrast Sekhukhuni’s work with Petra Cortright’s Bridal Shower (2013), a webcam recording with digital enhancements. An enticing, red-lipped Cortright, dressed in a white dress, dances and sways in her bedroom amidst a lush atmosphere of softly falling animated rose petals. The setting refers to the ubiquity of so-called bedroom videos on YouTube, a medium that toes the line between self-empowerment and self-aggrandizement. That these bedroom videos are so often the domain of lifestyle bloggers and ‘brand ambassadors’ (e.g., cosmetics and other domestic product reviewers) takes the format into the realm of the feminine, and in this, Cortright asks important twenty-first century questions about the gaze. 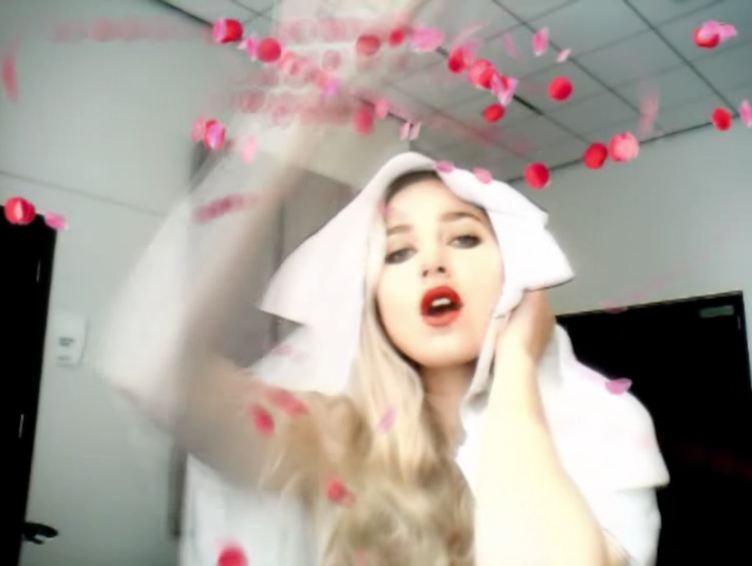 I Was Raised on the Internet presents an incommensurable situation: it is both “all about me” and “the end of me” all at once, since another sense one might get by walking around the exhibition is that of living nowadays at the end of something, reinforced by the curatorial bent for low lighting and dark walls: the “white cube” in a Blade Runner costume. However, many of the artists represented in the exhibition were only children during the Y2K blip, so their deepest fears are not articulated in terms of catastrophic technological malfunction, as their parents’ might have been. Rather, their fears are more pointed: the loss of intimacy, the loss of a private life, the loss of personal relevancy, or the eventual end of us all due to a doomsday war or (more likely) intensifying climate change. 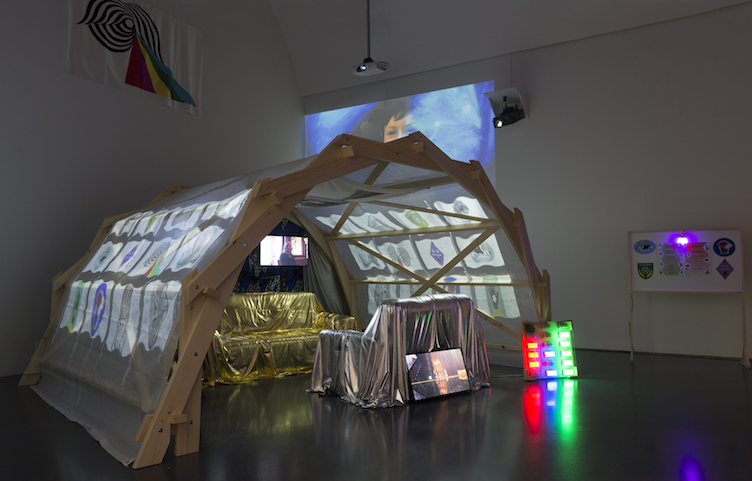 Thus I am intrigued by what I perceive to be an emerging period style suggesting communitarian responses to the end of civilization as we know it. Greek artist Angelo Plessas’s deliberately haphazard installation, The Eternal Internet Brotherhood/Sisterhood 6, Dörnberg (2017), partially re-creates an experiment realizing a real-life utopian community formed originally online. I comprehend Plessas’s work alongside contemporaries aiming at a post-nationalism implicitly to occur in the aftermath of a hypothetical global revolution. See, for example, Lucy and Jorge Orta’s “supranational” Antarctica World Passport (1995-) project (which I saw at Frieze London in 2017); Lina Lazaar’s concept for the Tunisian entry to the 2017 Venice Biennale, The Absence of Paths, in which visitors are issued a fake passport declaring them a “citizen of the world”; and Heba Y. Amin’s complex Operation Sunken Sea (The Anti-Control Room) (2018), featured at the 2018 Berlin Biennale, suggesting the repositioning of the Mediterranean Sea to construct a federally-united Euro-African mega-continent. Bookending Plessas’s piece at the other end of I Was Raised, one finds British/Sri Lankan artist Christopher Kulendran Thomas’s New Eelam (2018), an installation commissioned by the MCA (but, it should be noted, introduced at the Berlin Biennale in 2016). New Eelam proposes that the internet has facilitated certain dispersed notions of where we live, i.e., the real-versus-virtual spaces we occupy on a regular basis, and could therefore promote new, fluid notions of citizenship and capital. 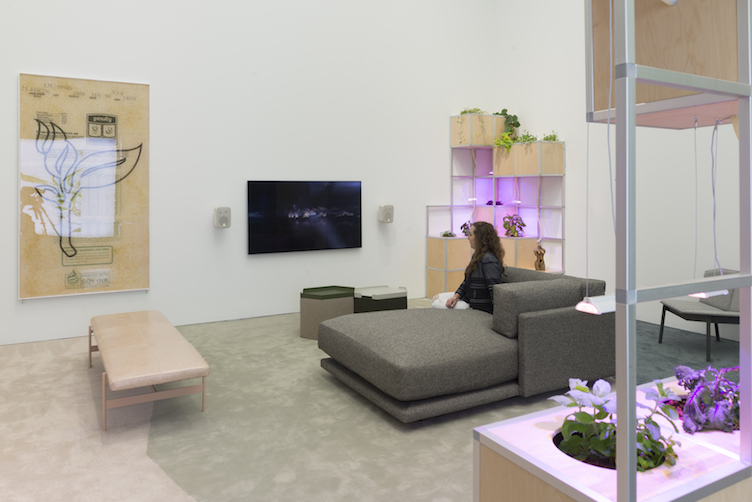 The rightful and generous inclusion of so many screen- and monitor-based artworks and immersive environments made it slightly too easy to be distracted away from the substance of artworks more traditionally aligned with 2D media and sculpture. There are exceptions; I was felled by Matthew Angelo Harrison’s excellent suite of 3D-printed African masks—Mk-004-conjoined_s2, Mk-000-portend, and Mk-001-archetype (all 2017)—set atop a vitrine made of bulletproof glass of the type one might see in high-crime areas (as in the artist’s hometown, Detroit). Harrison’s sculptures enliven for a new generation the important questions at the nexus of cultural patrimony, authenticity, race, and perceived value. As a separate matter, the marginal positioning of the computer stations comprising the “Online Platform” unnecessarily subordinated this strong body of work, as it was easy to mistake it for a supplementary resource at the exit. 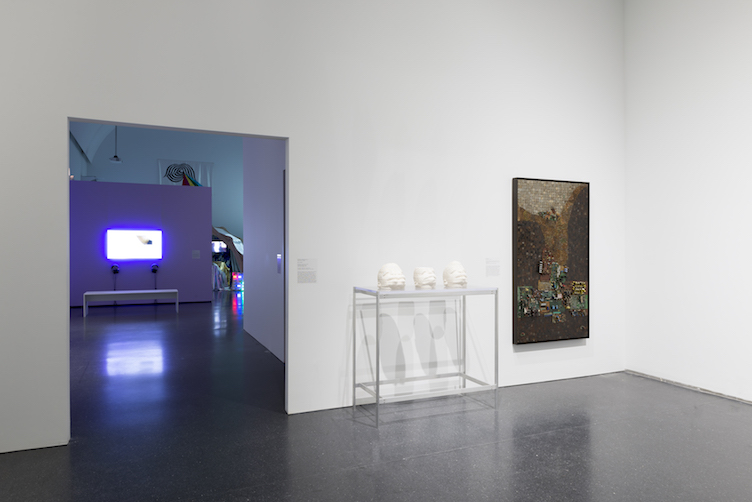 I attended two public education events associated with I Was Raised on the Internet. One was a lecture by Trevor Paglen, a MacArthur genius grantee and artist featured in the exhibition (Autonomy Cube [2014]), on the subject of the internet’s influence on visuality in the historical present. Paglen’s mesmerizing presentation began with what the internet “looks like” in terms of its physical infrastructure (e.g., cables, ground stations, satellites), which has been the subject of the artist’s photographic practice since 2010. He then transitioned to the question of “how machines see,” that is, how computers are programmed to recognize images in the natural world—for purposes of surveillance, for instance. Coding still prefers binary thinking (i.e., if “A,” then not “B”); therefore, software oftentimes reflects the prejudices of its designers. Paglen asked: if a computer is programmed to recognize Barbie as one-hundred percent female, then how might the same computer process an image of Grace Jones? Good question. In the end, the artist suggested that, in a contemporary era supposedly becoming more fluid in terms of its social categories, we must challenge the authority of technology while still holding out for its vision of a better and more connected future.

The second event, “Queer Narratives,” featured the noted gender theorist Jack Halberstam in conversation with Zach Stafford, the digital journal content editor for the gay dating app, Grindr. The fact that the Chicago Tribune previewed the event is, I think, a sign of the times in which coming to terms with the role social media plays in dating and having sex carries massive public interest—and the lecture theater was packed. Throughout the discussion, Halberstam and Stafford raised many excellent questions, the type of which will no doubt fuel graduate dissertations for a generation: what is queer time and space? Do millennials comprehend time and space differently due to social media, and if so, how does that impact the social violence of closeting—are you “out” online or not, and why? How have apps impacted such queer phenomena as “cruising,” and perhaps blunted visually complex forms of social engagement? One question pierced me like a dart: when asked, “What is the imagery of queerness today?” Halberstam answered, “Queerness is what is left unsaid.” This “left unsaid” represents the subtlety shared in an exchange of glances, a nonverbal communication, a way of being without having to say so, stifled now by living online.

To return to Queers in Love, Anthropy accentuates the lingering fear that before anything positive happens, we will have run out of time, rendering our best efforts useless. Certainly, the internet offers us much to gain, from greater self-awareness and social interaction to fully reimagined governmental and economic institutions. But this is also a great challenge in the digital age: before we win, if ever we do, we must first learn how to lose—ourselves and the world as it is—with purpose.

Miguel de Baca is an associate professor of modern and contemporary art history at Lake Forest College. In 2017-18, he was the Terra Foundation Visiting Professor of American Art at University of Oxford.