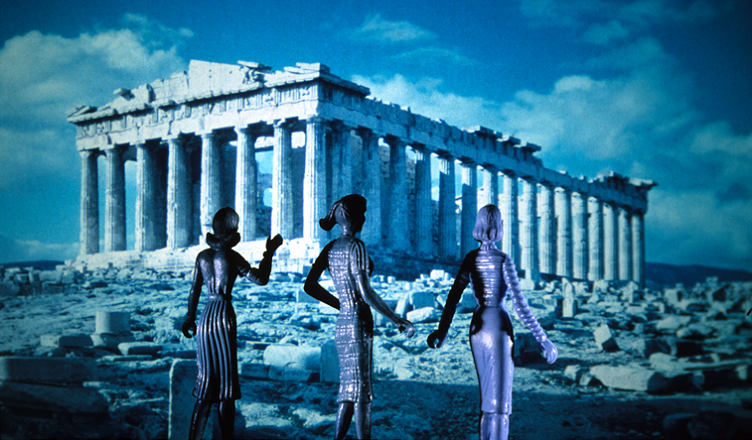 Big Camera / Little Camera featured five decades of work by Laurie Simmons, who is best known for photographing dolls. Simmons is part of the Pictures generation, artists who startled the 1970s art world by abandoning experiments in mediums such as performance and video in favor of undisguised mimicry or outright appropriation of mid-century American media images. Like peers Sarah Charlesworth, Barbara Kruger, Thomas Lawson, Sherrie Levine, and David Salle and Cindy Sherman, Simmons recalled the 1950s and 60s, an era of pretty wives, blonde children, and dogs who never barked, all of whom dwelt in beautifully furnished homes. According to Simmons, who speaks more volubly than her peers about childhood experiences, imitation was key to her family’s pursuit of the American dream. Their Levitt-designed Tudor-style house on Long Island was decorated exquisitely by her mother with replicas of antiques. In the basement, Mom created a faux soda shop next to her dentist-husband’s darkroom. Simmons claims that as a child she didn’t know whether her mother had decorated the home to emulate magazines or the magazines were reproducing her mother’s taste. This is the formative anxiety of Pictures generation postmodernists, who wondered what kind of life they could live if everything is only imitation.

1980s accounts of Pictures art credited it with greater confidence and purpose. The work of Simmons’s generation was said to expose the mechanics of reproduction and pinpoint the machinations of representation. Sherman’s 69 Untitled Film Stills (1977-1980) were lauded for making it obvious that cinematic images construct femininity to accentuate vulnerability. Like Sherman, Simmons describes herself as an artist who uses photography, not a photographer. While her male colleagues went about reviving painting, Simmons and her female peers betrayed painting by using photography and betrayed photography by derelicting the image. I well remember Simmons hitting a postmodernist high with her Interiors and Tourism series of 1982-1984. In Parthenon (1984; fig. 1), Simmons offers a good-enough scale relationship between the blue plastic dolls—Teenettes made in Japan—and the background, a blue-tinted postcard of the eponymous monument. Like the other images in these series, which depend on rear-screen projection, a technique used in Hollywood movies to simulate exteriors, the photo at first appears vintage but soon looks primitive. The light fall-off at the corners of the image makes plain the limits of the technology. The dolls are lit just enough to accentuate too-stark contrasts between brightly illuminated and flatly shadowed parts of the girls’ bodies. Disconcertingly attenuated, the dolls compare poorly to the carved columns of the Parthenon. The highest lights emphasize the lines of the figures’ pleated skirt, check dress, and striped blouse, all of which are incised so extravagantly badly into the plastic that one imagines the mold maker was a Mannerist. While Simmons’s Tourism series, which sees the Teenettes visit the Taj Mahal, Stonehenge, Chartres, St. Basil’s, and the Great Wall, can be read as a persuasively dismal take on the adventures of affluent American girls abroad, it is the marriage between compromise technologies—molded-plastic dolls and rear-screen projection—that matters here as an anti-aesthetic feat of willed imperfection.

The MCA show fairly reveled in Simmons’s manipulation of imperfection by exhibiting all of her early serial works of 1950s dolls in dollhouses. Like any average museum-goer I balked at the idea of looking closely at multiple variations on the same setups. This despite my enthusiasm for the precedent set by 1960s conceptual art, which illustrated an idea in a series of amateurish photographs that exhausted a subject without identifying its intrinsic value. I was wrong, however, to imagine that inspecting Simmons’s photographs was as pointless as scrutinizing every image of every building on Edward Ruscha’s Sunset Strip. No matter how willfully poor the images might appear, artists of Simmons’s generation wanted their pictures to be revelatory, not gratuitous. A dutiful viewer might imagine, then, that working with dolls in the late-1970s was Simmons’ way of raising consciousness about the relentless training of girls to become homemakers. For the first generation of American artists to include as many female hopefuls as it did males, that consciousness of the perpetual limits on women’s prospects was inescapable. Rather than assert once more that the work is about gender roles, it would be more accurate to say that Simmons uses second-hand dolls and dollhouses to show us how vulnerable is the domestic realm.

What I saw when I took the time to inspect Simmons’s serial works was the outrageous crappiness of her objects. At first, I was inclined to be generous and not quibble over the bottle of “Pure Milk” that is too big for the doll. After all, scale relations are rarely perfect. I told myself not to fret over that one photograph—Kitchen / Woman in Corner (1976; fig. 2)—where the artist lets us see the effects of water damage on the dollhouse. But once I noticed it, Simmons’s shallow focus ensured that I remained fixated on the mold and the buckled floor. Although I’ve “known” these pictures for decades, I had to scrutinize more than one series before realizing that, save for a ghastly pale head, the main doll is fashioned out of a barely modeled block of magenta plastic with giant visible joints on improbably broad shoulders. Accepting that this is Mom, rather than Frankenstein’s monster, and this a plausible jug of milk, quite nearly kills one’s thirst for play. Like photography, which she never studied at art school, dolls are a vehicle through which Simmons explores a subject, not toys that she likes. This is convenient because, as the early serial works suggest, unloved dolls are the ideal objects of a travesty of caretaking.

Simmons’s work reminds us that taking care is not just the mother’s responsibility. Taking care is also the duty of the girl-child, who is expected to keep her dolls clean (as good as they were in the box), and of capitalism, which ought to be ashamed to sell such lousy toys. It is also the duty of the artist who is supposed to be devoted to her subjects as much as her medium. Simmons resists these duties throughout her career, for the most part productively. This resistance takes a strange turn, however, in The Love Doll, a 2009-2011 series that represents thirty-one days in the life of a sex doll rescued, not unlike Pierre Huyghe and Philippe Parreno’s AnnLee, from future misuse (The Love Doll / Day 8 (Lying on Bed), 2010; fig. 3; and The Love Doll / Day 22 (20 Pounds of Jewelry), 2010; fig. 4). Rather than continue to exploit flaws, Simmons here takes advantage of technological advancements with life-size high-definition photographs of a top-of-the-line silicone doll. Custom made in Japan for Simmons, the doll resembles a nice upper-middle-class Japanese woman rather than a porn actress. We know, however, that she remains a surrogate. Simmons tells us that the doll arrived with separately packaged genitals and engagement ring. In the book accompanying the series Simmons makes daily notes about the process through which the doll—dressed in Target at one moment, high fashion the next, only occasionally wearing the ring and never revealing her genitals—almost becomes a real girl in the artist’s own large Connecticut home. Interiors here are tastefully luxurious, and spotless, as they would be in a decorating magazine. The doll is lovely. But this is not a conventional set-up for caretaking. Instead it’s an illustration of something like phobic neglect.

Describing men who own sex-dolls as “sad and lonely people, not hurting anyone,”1 Simmons nevertheless disdains the way they dress their dolls, brush their hair and take them out for drives. Simmons notes her several refusals to perform care work, refusals made possible by the labor of her assistants. She likens prepping the doll for a shot to a parent’s labor, writing “I’ve made it clear to Darragh and Joanna that I’m not interested in dressing the doll or seeing it naked. What a funny job for them—newly engaged and all; how strange for me to see them wrestle with the thing. Her.”2 Simmons’s refusal to handle the doll naked seems intended to keep the doll chaste—a child, albeit not her child. If we consider that the average love doll is sold to be exploited sexually, this insistence that the doll is sexless could be a kind of caretaking. The fact that the doll ends up as a geisha sitting on her heels in full makeup and finery demonstrates, however, that Simmons is not above manipulating the erotic appeal of her subject (The Love Doll / Day 32 (Blue Geisha, Black & White Room), 2011; fig. 5). This transformation allows Simmons finally to offer up a vision that many westerners will happily misperceive as wholly aesthetic and pleasing in an old-fashioned way that Pictures art, with its quotidian American subject matter and studied imperfection, was meant to trounce.

Of all the works in the show, the one that best fulfilled the promise, rather than threat, of the Pictures generation is the feature film My Art (2016), which was screened only a handful of times. Writer, director, and lead, Simmons plays Ellie Shine, an artist-professor who is bemused by the early- and late-career successes of a student and a friend (the latter modeled on painter Marilyn Minter). Ellie takes advantage of a house-sitting gig in a Connecticut home (which is really Simmons’s own) to reprise a dozen scenes from old movies. She looks shaky as Dietrich in Morocco and wrong as Monroe in The Misfits. She does Dietrich’s crossdressing one better by playing Alex in a Korova Milkbar scene from A Clockwork Orange (fig. 6). And she underplays the charm of her two male costars, and possible love interests, by having them emulate the much younger Jules and Jim. When Simmons gave a talk at the MCA, it was these scenes, along with their originals, that she chose to share with her young audience, which was likely seeing them for the first time. In her talk, Simmons noted the difficulty she experienced following the Hollywood model for proper female behavior and successfully conveyed the ickiness of a family habit of serenading her and her two sisters with the song “Thank Heaven for Little Girls” (from Gigi, a musical about the training of a courtesan). Simmons also demonstrated her love for the original scenes, an affectionate response that Pictures artists Levine and Richard Prince also professed but critics ignored. It would be easy to dismiss My Art as a vanity project, or as an example of what we might have to call (with a nod to Fredric Jameson) post-parody pastiche. But this would be to miss what is actually progressive here—the unselfconscious depiction of episodes in the creative and social life of a single woman in her late 60s. A woman who is no Norma Desmond. With My Art, Simmons imagines what’s original for women who have no media models for life after middle-age in the twenty-first century. She thus makes good on her generation’s foundational anxiety about the limits of imitations.

Sarah Evans is associate professor of the history of contemporary art at Northern Illinois University. She earned her Ph.D. from University of California at Berkeley and held postdoctoral fellowships in Berkeley’s College of Letters and Science and at Cornell University’s Society for the Humanities. Evans is the author of “There’s No Place Like Hallwalls: Alternative-Space Installations in an Artists’ Community,” Oxford Art Journal, 2009.