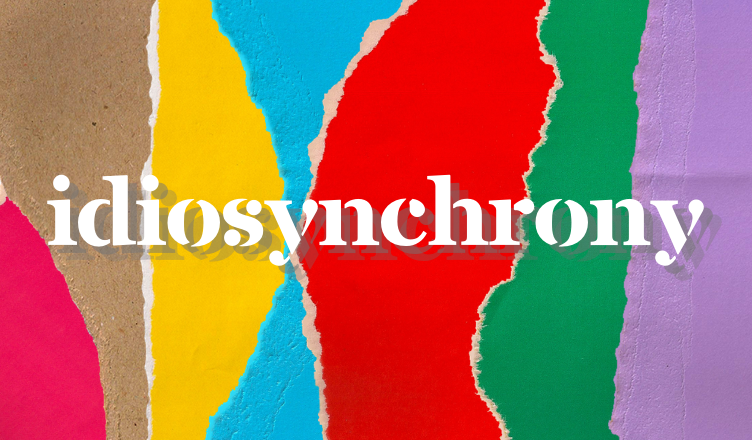 Jay Buchanan and Holly Gabelmann are the co-creators of the new podcast qua collective work of sonic art Idiosynchrony. Gabelmann and Buchanan recently “met” with performance scholar and graduate student Maddie House-Tuck to talk about Idiosynchrony’s origins, inspirations, interventions, and future. New episodes of Idiosynchrony are released on Spotify. To revisit past episodes, head to SoundCloud. For more information, please see the project’s website.

MHT: I want to start by thanking you both for creating Idiosynchrony and bringing this dynamic project into being. For those who are unfamiliar with the work, what is Idiosynchrony?

JB: Idiosynchrony is a lot of things. It looks and smells like a podcast, but we feel like it sounds different from most podcasts. It’s a collaborative sonic artwork and the name refers to both the episodes – the substance of the project – and the community of voices involved in making each of them. In that sense it’s also a kind of ensemble company or choir. It’s a bunch of individual performers making noise together.

HG: It’s also a weaving together of experience across time. I think it’s an agreement or collaboration between us and our Contributors that crosses geographic and temporal boundaries. United by somewhat arbitrary rules, our Contributors submit a recording of their encounter with a specified point in time and send it to us. Then Jay and I work to edit between three and five of these voices together into an episode. In this sonic collaboration, I think Idiosynchrony is a practice of connection, of mindfulness, and of joy.

MHT: The work resonates as passionately collaborative; I love how the project is seeking connection across boundaries of time and space and exploring all of the serendipity and unruliness therein. There seems to be a profound multiplicitousness to Idiosynchrony in form, content, and character. Forgive me for what might be a somewhat unfair question, but I am curious: Is there anything Idiosychrony is not?

HG: Idiosynchrony is not hierarchical. It’s not static or fixed.

JB: Absolutely, and those nots are connected. We understand our Contributors as 100% collaborators in the making of Idiosynchrony. We aren’t their bosses. The same goes for our working relationship as Managing Director and Artistic Director. We partner on everything but we also respect the unique strengths of individuals and trust them to do their own work in the way they know it must be done. We also approach the concept that guides Idiosynchrony as flexible, so if we or our Contributors decide the aesthetic system of the project needs to change down the line, it will.

MHT: Thank you for that; as a contributor myself, I have definitely felt and appreciated the flexibility embedded in the project. As a listener, I have also felt this work as particularly resonant in our current moment. What sparked Idiosynchrony’s inception? Why now?

HG: This project originated around the time that lockdown began. Jay and I knew we wanted to collaborate on something over the summer and suddenly found that we had the time to do so. Technology became integral to our process because of this forced isolation; it felt safer (and still feels safer, I think) to collaborate at a distance. Whereas otherwise we might have created a physical installation or performance together, the pressures of this COVID-19 moment caused us to lean on computers as our primary way of working.

MHT: What does this leaning look like? Can you speak a little more on how each episode is made and the editing process?

JB: I handle the first parts of the process. I keep up with all our Contributors, assigning the times for their recordings with a mind to the combinations of folks in each episode’s “cast.” I also take a first pass at curating the submissions. I call on a background in theater directing here, doing a beat breakdown of sorts on every audio submission to isolate thematic and aesthetic overlaps between different contributions. I put together a loose ordering of clips to help guide Holly in her intuitive editing process.

HG: Once all the audio has been collected and Jay has taken a first pass at a rough outline, I sit down and edit it all together. After I’ve listened to all the different recordings for an episode for the first time, I use Jay’s outline as a starting point and then let editing happen intuitively. Sometimes the episodes end up being more or less what the outline suggested and other times they are entirely different.

MHT: So it evolves somewhat organically – if you do not mind me asking, how does this feel? How do you conceive of intuitive listening in this process?

HG: I think a lot of the editing is letting the Contributors’ words and sounds guide the process. This is where I feel a deep sense of collaborating and thinking across time with our Contributors. Once I really get into the editing, a conversation begins to occur between Contributors and I feel a strong responsibility to facilitate this conversation. Maybe another way to think of Idiosynchrony is as a conduit between people, Contributors and listeners alike, who might never meet.

MHT: The conversation that arises in each installment is definitely palpable; the points of intersection are quite compelling! I want to move a little bit to talking about the art traditions and genealogies Idiosynchrony is drawing from. I feel like I can hear multiple inspirations operating at once – could you speak on what these may be?

JB: A whole bunch of ‘em! We’re working from traditions of storytelling. This project references all sorts of oral traditions in the exchange and commingling of folks’ stories. Through our compositional process we also connect with collage and textile/fiber art practices.

MHT: The character of collage seems to extend into the cover art as well!

JB: I also think about Idiosynchrony as a conceptual work of art, by which I’m referring to a pretty strict art historical definition of conceptual art pulled mostly from the American 60s and 70s. It’s loosely tied to minimalism, and the general aim is limiting the work to the execution of a singular, guiding idea. This idea operates the work, so the aesthetics are somewhat automated and aren’t bound up in notions of artistic intention. In asking folks to record their interactions with a given moment, we’re opening up the aesthetic possibilities; we couldn’t possibly precondition everything our Contributors provide. Holly and I are a little bit more agentic in the materialization of that process than a lot of conceptual artists, like Sol LeWitt with Variations on an Incomplete and Open Cube (1974). Exponential possibilities unfold for the combination of elements, which are determined by an aesthetic algorithm.

MHT: That is a really fascinating connection you make between Idiosynchrony and the ethos of late-twentieth century conceptual art. The opening up of aesthetic possibilities and embrace of unpredictability calls to mind some performance art legacies as well.

JB: Yeah, our process references all kinds of collaborative traditions and practices that imagine the work of art as an event or a frame for momentary communitas. Fluxus has a role here. Every episode of Idiosynchrony is a little like a happenings, too, in an Allan Kaprow sense, but in digital space rather than like a gallery space or a theater space.

MHT: Yeah, thanks so much for bringing us to the intimacy of the project. There is something so unique and sensorial about experiencing the work through the ears, and I definitely hear a linkage to immersivity.

HG: Since creating Idiosynchrony, I’ve also begun an art history course on new media, and I’m struck in particular by how our work fits into this broad category. Kit Galloway and Sherrie Rabinowitz’s Hole In Space: A Public Communication Sculpture reminded me of Idiosynchrony. Unlike Hole in Space, this project forges a link in time rather than in space.

MHT: This link in time seems quite key for the project and the interventions it is making. I would love it if you could speak to how you feel the podcast is playing with ideas of time and temporality. What conceptions of temporality do you feel Idiosynchrony is working within and/or putting forth? Also, what have you learned about time since starting the podcast?

HG: Time does not always flow linearly in this project. The order that the episodes are released is not necessarily the order in which Contributors record their submissions, so sometimes you get to trace the threads of someone’s experience out of order.

MHT: Re-encountering the threads of one’s own contributions can also be a disorienting yet generative experience; it has been interesting to see which parts of the recording I remember or forget, depending on what makes it in.

HG: I think you also get a sense of the cyclical nature of time in the way that different themes ebb and flow in episodes. And of course, I mentioned earlier how the episode feels like a cross-temporal collaboration. It’s particularly weird to edit my own recordings; I feel like I’m talking with my own ghost.

JB: I love it! As a critic and poet I’m invested in objects of memory and archives. I’m not much of an artist when it comes to making things, but I’m an avid scrapbooker. I experience each installment of Idiosynchrony as contact with myself and others in the coalescence of coeval moments happening somewhere and some-when else. Sometimes it’s particularly strange to hear myself recontextualized in the project.

MHT: For sure! As of our discussion, the project has ten installments (with the next one coming out on Tuesday!). The work is young, and it has a whole lifetime ahead. What are your hopes for the future of the podcast?

HG:  I’m hoping to continue working with people that neither Jay nor I know directly. Having a network grow organically takes time, but I’m looking forward to getting to work with strangers’ voices. It would be great to get to partner with theatres as well to open up new possibilities for Idiosynchrony. My other big hope for this project is to continue to practice ethical ways of creating. We have been working to establish an ethics of radical transparency and accessibility in this project. I hope that we can expand this practice so that this project can be a way of imagining a kind of collaborative utopia together.

JB: I’m particularly excited about the possibilities for spatializing and visualizing Idiosynchrony.

MHT: What are you imagining here?

JB: A museum or gallery exhibition would be really exciting. I imagine concrete spaces designated by time like our episodes, so spectators could navigate a dimension of 3:15ness, for instance. I like the idea of collaborating with Contributors to develop an exhibition, too, just like we do with the episodes.

I also, selfishly, just hope people keep listening with us!

Maddie House-Tuck is a graduate student at Washington University in St. Louis researching at the intersection of performance theory and carceral studies. Her scholarship, broadly conceived, explores histories of resistance and refusal to the carceral state, paying particular attention to embodiment and gesture, artistic interventions, and temporal politics.