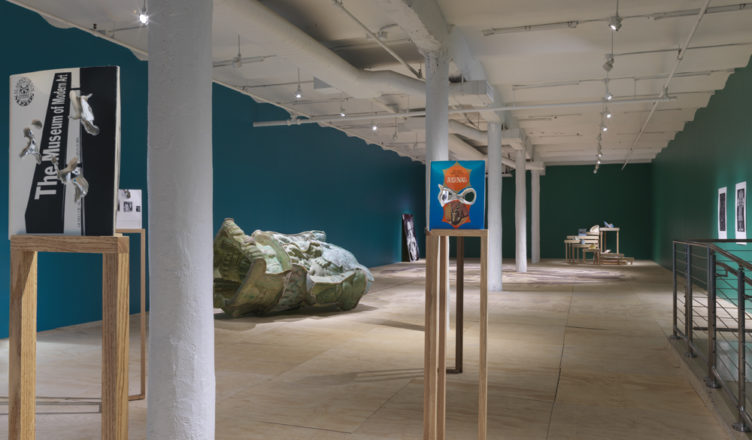 The reciprocal relationship between interior and exterior knowledge and identity provided the interpretive framework for Finding Oneself Outside, Mariana Castillo Deball’s solo exhibition at the New Museum in Spring 2019. For more than a decade, Castillo Deball has addressed the intersections of history, science, cultural patrimony, and identity in her works through the lens of reproductive technologies and modes of collecting and displaying cultural artifacts. Castillo Deball was born in Mexico City in 1975. After studying there and in Amsterdam, she moved to Berlin, where she has lived and worked for several years. The ancient and early modern past of Mesoamerica—a cultural region encompassing present-day Mexico and parts of Central America1—is a particular focus of her works. And yet, the significance of the show’s title, “finding oneself outside,” extends beyond the literal (that Castillo Deball interrogates Mexican identity from a geographic remove). Rather, as an artist-researcher she is engaged with the issue of the historian’s inevitable distance, or—to follow Carlo Ginzburg—their estrangement  from their object of study. In Castillo Deball’s words, “the construction of identity is not a simple linear process; it is an epileptic process in which the membranes of the individual and the transit of indigenous and alien elements are continually negotiated. […] Estrangement thus becomes a tool that is part of the creative process, implying an oscillation between understanding and not understanding.”2

In the New Museum’s survey of Castillo Deball’s work from the past decade, which was curated by Natalie Bell, visitors encountered several points of estrangement that built up in layers as one moved through the exhibition. The installation consisted of twenty-four artworks from five different series, all of which were produced between 2010 and 2019. With the exception of three linocuts that hung on one of the blue-green walls, Castillo Deball arranged the objects atop a plywood floor that was itself a work commissioned for the show. Objects on view included a hollow fiberglass cast of an iconic Aztec sculpture lying on its side (No solid form can contain you, 2010) and a selection of 1960s books about museums of the world, each propped open atop its own stand to reveal a series of concentric holes that expand in size from the front cover to the back (Du ut des, 2014–19). The installation produced new dialogues by positioning exponents from distinct series and temporalities on top of and adjacent to each other. Castillo Deball further embedded a process of intentional distancing, or historical mediation, within each of the individual works on view: whether by commissioning a cast from a mold that was, in turn, made from a cast of the original, or cutting through books as if to materialize a reader’s passage through their pages. While extended wall labels and Castillo Deball’s own brief audio explanations of some works offered essential background information on her historical subjects, the complex, multifaceted nature of each object or series on view exceeded the constraints of the exhibition context. Rather, they demanded additional research on the part of viewers seeking a deeper understanding of the stakes of her practice.

Castillo Deball’s research-based practice is notably collaborative, engaging scholars of anthropology, art history, and mathematics, as well as model makers, graphic designers, and others. Collaboration offers her a means both of highlighting and of bridging the gaps between understanding and not understanding. This is particularly evident in Castillo Deball’s imagined dialogues with artists of the past, including those active in the eras that preceded and followed Spain’s 1519–21 conquest of Mexico, whose names have in most cases been lost. She makes actual and imagined collaborations and conversations manifest in artworks that are rooted in technologies of reproduction, and that draw on the science of what is known in Mexico as museografía (museography): techniques and practices of museums, and specifically of display and exhibition-making. Working predominantly in sculptures and installations, but also through printmaking, painting, and photography, Castillo Deball interrogates how exhibitions—and, by extension, institutions—present knowledge to publics in real space and time. In so doing, she sheds light on historical and ongoing power imbalances, and on how the archaeological and artistic past has been mobilized for modern geopolitical ends. This mediation between past and present was particularly foregrounded in Finding Oneself Outside’s richly textured installation.

A new work, Teozacoalco Map (2019), a vast wooden reproduction of a sixteenth-century map of a small town in New Spain, grounded the exhibition in literal and conceptual terms. The original map, which dates from 1580, represents Teozacoalco (today San Pedro Teozacoalco), a remote village in the Mixtec-speaking region of present-day Oaxaca, in southern Mexico. It is one of several surviving maps from the decades following the Spanish conquest that are considered hybrids of indigenous Mesoamerican and early modern European representational devices. This particular map is the most famous of the Relaciones Geográficas: sixty-nine maps of provinces, cities, and villages in New Spain, made by indigenous, European, and Creole hands in response to a questionnaire sent from the royal cartographer in Madrid to officials throughout the empire in 1577, with the goal of compiling a definitive chronicle-atlas of Philip II’s realm.3 Castillo Deball’s monumental inlaid wood version—the third such floor map she has produced to date4—allowed viewers to place themselves within a key document from Mexico that has long been held outside its borders, in the Benson Latin American Collection at the University of Texas at Austin. To create the original map for the crown, an indigenous artist assembled twenty-three separate sheets of European paper into a surface measuring 6 by 4.5 feet. They used a compass to draw a circle that encompasses Teozacoalco and its surrounding territory, which they filled with symbols of natural and built features that are arranged in terms of relative proximity.5 Swaths of rich green pigment, representing the region’s mountains, are crisscrossed by blue rivers and brown roads and punctuated by multicolored pictograms, including toponyms for specific places and paired figures that represent ruling lineages—making this not just a map but a chronicle of the community, rendered by an indigenous hand on European paper for a Spanish audience. For her monumental version, Castillo Deball substituted different shades of woodgrain for each of these primary components, limiting their chromatic range to a series of browns and thereby rendering them harder to distinguish. The rich green and blue tones that characterize the original map were evacuated to the walls of the gallery, transforming the white cube into an immersive installation in which museographical choices were impossible to overlook.

Works installed atop the map’s empty areas offered other glosses on the notion of “finding oneself outside.” No solid form can contain you (2010) and Stela K, Quiriguá (2019) are reproductions of monumental ancient Mesoamerican stone sculptures, each in a different medium. No solid form can contain you is a hollow green fiberglass cast of the monumental carved stone Coatlicue (c. 1500 CE), one of the great examples of metropolitan Aztec sculpture in the Museo Nacional de Antropología in Mexico City. Castillo Deball commissioned the cast from the family that has long produced replicas and models for Mexico’s Instituto Nacional de Antropología e Historia. Whereas in past exhibitions she has scattered its separate components on the ground, at the New Museum No solid form can contain you was assembled and rested on its back, creating an unavoidable obstacle and evoking the archaeological context in which it was discovered in Mexico City’s Zócalo, or principal plaza, in the late eighteenth century. Gazing into the cast’s hollow interior and observing the varying shades of its translucent skin served to empty out the nationalist myth of direct continuity from the pre-conquest Aztec empire to the modern Mexican state, in whose construction Coatlicue and its many reproductions have played a prominent role over decades and centuries. Despite the wall text’s claims, the components of the cast were not inverted to reveal their concave sides; Castillo Deball’s only intervention was to position their joints outside rather than inside, thereby revealing the seams by which the cast is stitched together.

Propped against the wall near a corner of the gallery sat Stela K, Quiriguá, a 6-foot-tall mounted black-and-white photograph of a carved sculpture dedicated to the last ruler of that ancient Maya city in modern-day Guatemala. Its source image is a badly-damaged glass negative taken by nineteenth-century British archaeologist Alfred P. Maudslay in the course of his explorations of ancient Maya sites in present-day Guatemala and Mexico. The remnants of a sticker and spiral cracks within the glass created abstract designs—products of chance—which, in tandem with the hollow, modified cast of Coatlicue, alerted viewers to the constructed and fragmentary nature of the modern record of the past. With both Stela K, Quiriguá and No solid form can contain you, the potency of Castillo Deball’s intervention lies not in producing new iterations of existing reproductions of ancient Mesoamerican sculptures, but in juxtaposing these with each other and with her other research-based works. The scope of her interrogation of the conventions of collecting, storage, display, and ultimately knowledge production in archaeological as well as contemporary museums is revealed through aggregation.

If a focus on collecting, reproducing, and displaying works from Mesoamerica constituted a major emphasis of the exhibition, a parallel dialogue was sustained through the inclusion of two groups of smaller-scale objects—nine each—from the series Mathematical Distortions (2012) and Do ut des (2014–19). The Distortions, arrayed on a wooden spiral platform at one corner of Teozacoalco Map, are Castillo Deball’s versions of turn-of-the-century mathematical models from the collection of the University of Göttingen, which she researched for Finding Oneself Outside: Uncomfortable Objects, her contribution to dOCUMENTA 13 (2012). In contrast to the smooth plaster models on which they were based, Castillo Deball molded her mottled, multicolor sculptures out of scagliola: a combination of plaster, rabbit glue, and dye developed in seventeenth-century Italy as an inexpensive substitute for marble. These are her quintessential “uncomfortable objects,” which, she writes, “are constantly being erased, replaced, neutralized and destroyed in order to give space to new things, but this erasure is never complete, we are surrounded more and more by things, quasi-things, fragments, distortions and hybrids.”6 Like the relative distances represented in the Teozacoalco Map, these counterfeit replicas of abstract formulas are a reminder that knowledge is always subjective.

On the other side of the gallery, nine works from Do ut des were displayed: each one an open book from the El Mundo de los Museos series, commissioned from Brazil-based designer Eugênio Hirsch by a Madrid publisher in the late 1960s with the aim of bringing information about major institutions and art cities to Spanish and Portuguese-speaking audiences. Beyond their transnational identity, the appeal of the series for Castillo Deball derives from the fact that each one includes a centerfold that illustrates the scale of major works from a particular international museum—a significant departure from the leveling effect produced by the unscaled reproductions in André Malraux’s Musée imaginaire, which went into mass circulation in the previous decade. The amoebic wormholes drilled through each book allowed the viewer a kind of x-ray vision through (and between) the books as they wandered among them. The intervened books of Du ut des thus acted as a microcosm of this multilayered exhibition, in which viewers oscillated between finding themselves inside and outside the museological conventions of knowledge, reproduction, and display that lie at the heart of Castillo Deball’s practice.