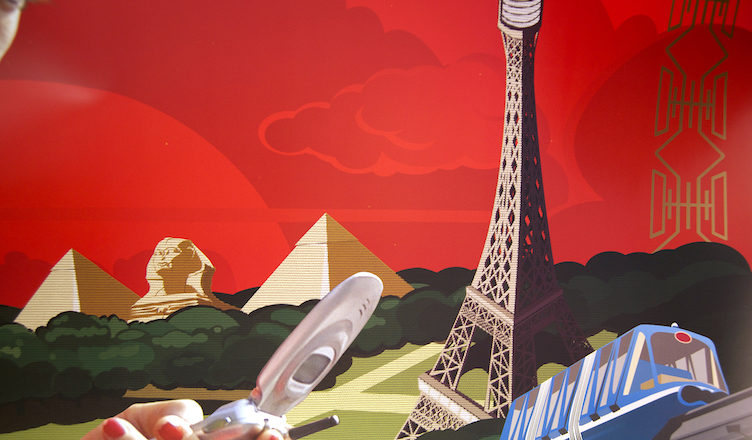 Beijing World Park—which opened in 1993 with much fanfare—boasts of its inclusion of over one hundred “famous scenic spots and historical sites” of the world in miniature. As tourists walk through the outdoor park’s grounds, they are promised “the world” without having to leave Beijing.1 In a single visit, they might chance upon the Egyptian pyramids, the Taj Mahal, the Eiffel Tower, the Golden Gate Bridge, and the moai of Easter Island. Jia Zhangke’s film The World (2004) takes place in the park and tells the story of two of its employees, Tao and Taisheng. As Hye Jean Chung puts it in Media Heterotopias, the lives of the economically precarious Tao and Taisheng reveal “the empty promises of economic, social, and geographical mobility that are falsely projected by the ersatz globality of the park” (156). In the end, the characters perish together in a gas leak in a scene that Chung deftly interprets as deeply ambivalent. Their deaths, shrouded by shadows and the screen turning to black, “enabl[e] them to transcend visual forms of mediated representations,” as Tao’s disembodied voice asserts: “this is just the beginning” (157).

This is one of the more powerful moments of Chung’s analysis of what she calls “media heterotopias.” The book accounts for the ways in which a wide range of contemporary films embody residual traces of transnational “col-labor-ations” often obscured by scholarly and professional emphases on seamlessness, particularly in relation to digitized processes and visuality (13). On the one hand, the deaths of Tao and Taisheng mark the limits of the World Park’s seamless visual mediations of cosmopolitan experience; on the other, the digitality of the black screen affords these characters a freedom from their bodies that brings about a new beginning. 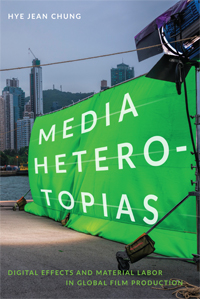 Media Heterotopias, which revisits Foucault’s notion of “other spaces” articulated in a 1967 lecture, adapts the philosopher’s premise that heterotopic spaces are localizable “counter-sites” layered into “all the other real sites that can be found within the culture” to examine digitally composited spaces of film.2 Heterotopic perception, Chung argues, serves a deconstructive function in relation to mainstream rhetorics about the integrative and smooth mobilities of digital environments. In the example above from The World, the “other spaces” occupied by the park workers interrupt the smooth operations of the park. Similarly, whether in Chung’s revelations of globally dispersed workflows and laboring bodies in the digital production of film through interviews and fieldwork, or in her analysis of diegetic traces of monstrous embodiments that exceed the sutured integration of cyborg bodies, heterotopias constantly threaten to disrupt the idealized functioning of global film production in the digital age. Chung’s case studies of films range from Hollywood blockbusters (Avatar, Interstellar) and global hits (Godzilla) to low-budget projects (The World) and laborious restorations (Ashes of Time Redux). Throughout the book, she maintains nuanced perspectives on the many possible relations engendered by heterotopic spaces within digital, non-digital, and hybrid environments.

The book’s chapters—“Heterotopic Media,” “Heterotopic Mapping,” “Heterotopic Modularity,” “Heterotopic Monstrosity,” and “Heterotopic Materiality”—indicate Chung’s indebtedness to the Foucauldian framework. The first chapter positions the concept of heterotopia against the broader discursive landscape of seamlessness, which is “used to describe the workflow efficiency of global visual effects pipelines for potential clients” (25) and, to a lesser extent, in scholarly concepts such as “suture” in film theory (21). Subsequent chapters are informed by case studies of film. Chung first takes us through a reading of Tarsem Singh’s The Fall (2006) and Wong Kar-Wai’s Ashes of Time Redux (2008) as “maps” bearing traces of layered heterotopic spaces. In The Fall, abstract and conflated representations of transcontinental travel belie Singh’s anachronistic deployment of location shooting in twenty-four countries, and Chung’s heterotopic model brings attention to the traces of geographical specificity that remain present in the film. Ashes of Time Redux is a map in a different sense. Wong’s painstaking digital remastering of the 1994 film bears witness to a “secret archive or depository of film history” (61), in which a significant portion of the original film’s reels were lost or damaged in the wake of the Asian financial crisis during Hong Kong’s handover to China (61).

Chung’s chapter on modularity explores how industry praise of James Cameron’s integration of pre-production, production, and post-production workflows in the making of Avatar (2009) masks a transnational network of vendors that, though largely unrecognized by Hollywood, nonetheless contributed concrete, material elements to the blockbuster film. Chung’s analysis of Avatar alongside Interstellar (2014) also emphasizes other ignored “physical legacies,” specifically of the global film industry on locations like New Zealand and Iceland, which serve in these films as alien landscapes within the imaginary of science fiction (104).

The fourth chapter focuses on “composite bodies” in two monster movies, Bong Joon-Ho’s The Host (2006) and various incarnations of Godzilla from Ishirō Honda’s original 1954 film to Gareth Edwards’s 2014 blockbuster. The fifth and final chapter explores tensions between materiality and immateriality in both The World and Disney’s Big Hero 6 (2014), which, in contrast to The World, adopts a liberatory stance toward “computer-based tasks” that ignores their entanglement with “the physical and mental toll” of such work on “animators, programmers, and technical directors” (170).

The rich detail of Chung’s analyses of both diegetic and extradiegetic heterotopias of contemporary film at a global scale constitutes the book’s core strength. Yet Media Heterotopia’s wholesale dependence on Foucault’s notion prompted two areas for further inquiry. First, what work is the term “media” doing in Chung’s analysis of film? In the introduction, Chung offers the following caveat: “Although I envision media heterotopia as a portable, versatile concept that can be readily applicable to various modes of mediation, a sweeping generalization that all audiovisual texts are media heterotopias is hardly discerning or productive” (16). Sweeping generalizations aside, I found myself wishing that Media Heterotopias did more to engage current work on media studies, because doing so could indeed enable a “productive” versatility for Chung’s helpful coinage. For instance, media scholars such as N. Katherine Hayles, Tom Boellstorff, Jay Bolter, and Richard Grusin have pointed to the many “seamed” aspects of digital media, as well as to the messy and material ways in which digital environments intersect with human bodies. These discussions could help to better define Chung’s stakes in using the term “media”.

Second, the notion of media heterotopias, in turn, could be of immense use to media studies, which is a field in need of greater political engagement. Foucault’s investment in heterotopias, after all, is thoroughly an anti-authoritarian strategy. In his own words, the boat is the heterotopic space par excellence because “in civilizations without boats, dreams dry up, espionage takes the place of adventure, and the police take the place of pirates.”3 Some more recent work in media studies is explicitly activist in orientation; media archaeology, for instance, motivates the materiality of anachronistic assemblage to counter smooth teleological narratives of technological progress. More immediately adjacent to the potential stakes of Chung’s “media heterotopias” is Sarah Sharma’s recent work on temporality (In the Meantime, also published by Duke University Press, in 2014) which explores how the mainstream sentiment that our hypermediated world is getting faster fails to account for differential experiences of time, particularly in the case of more marginalized bodies whose labor is required to maintain the illusion of this dominant model of speed. With a bit more emphasis on heterotopia’s anti-authoritarian roots, Chung’s “media heterotopias” could be of immense use as a strategic motivator of more work that is oriented toward activist, political stakes in the spatiotemporal mappings of yet unfolding digital age ecologies.

Amy R. Wong is Assistant Professor of English at Dominican University of California. Her primary research focuses on the intersections of media theory and Victorian studies. At Dominican, she regularly teaches courses in British and Anglophone literature, critical media studies, film, drama, and children's literature. Her publications include peer-reviewed articles in Modern Philology, SEL: Studies in English Literature, Studies in the Novel, Literature Compass, and Narrative, as well as essays on teaching and inclusion for the V21 Collective and Avidly.