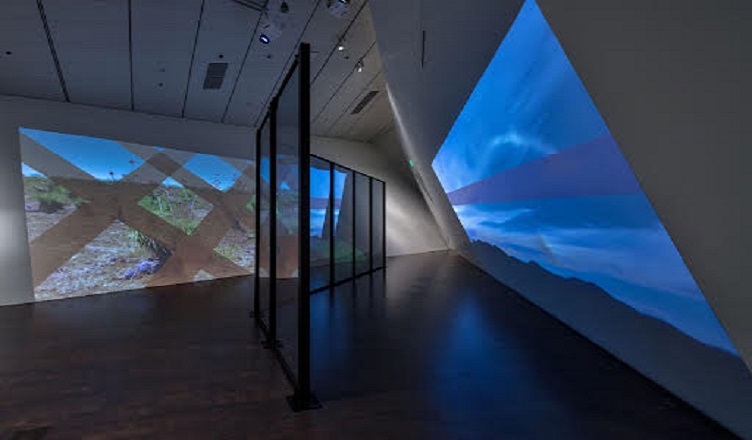 When making sense of the border between Mexico and the United States, media and popular culture tend to criminalize, exoticize, and simultaneously romanticize all activity surrounding its existence. Trying to break the barriers of identity de-limiting the lands on either side of the border has most often been perceived as a question of belonging. Who belongs to which side and to what extent does crossing geographical and sociopolitical boundaries allow for a new or renewed sense of identity? The hyper-visibility of Mexican-American, Chicano, and Latino artists in general in this country has come about in the past year precisely due to these questions. And while visibility is an important tool for the diversification of artistic spaces, a danger resides in providing platforms of expression that further question belonging, as opposed to historically contextualizing and thereby making problematic the very roots of such an interrogation. Mi Tierra: Contemporary Artists Explore Place succeeds by doing both, and more. Aside from being an exhibition of some terrific contemporary Mexican-American and / or Chicano artists, Mi Tierra forms an important art-historical exhibition that has much to show us about modes of belonging and the creative practices that might allow us to belong elsewhere and otherwise.

Mi Tierra, which opened in February and will be on view at the Denver Art Museum (DAM) through October 22, brings together thirteen artists who practice primarily in the Western United States. The curators selected artists that self-identified not only as Mexican or Mexican-American, but as creators working under the rich spectrum that comprises Chicano identity in this country. Justin Favela, for instance, self-identifies as Mexican, Guatemalan, and American, and Daniela Edburg was born in the United States but has resided most of her life in Mexico. The title of the exhibition was chosen, as pointed out by Kaitlin Maestas (Curatorial Assistant of Modern and Contemporary Art at the DAM), as a way to approach the complexities of Mexican-Americanness without limiting identity to a binary concept that results from living, working, or creating exclusively in one nation or the other.

Mi Tierra was in part conceived of as an opportunity for artists to create site-specific installations in DAM’s Hamilton Building. The museum’s sharply-angled and uninviting walls, designed by the Polish-American architect Daniel Libeskind, fragment any two-sided conceptualization of the border into violent, angular planes that situate the viewer on many sides of the political barrier simultaneously. Take the work of Daisy Quezada, who succeeded in bringing a section of the US-Mexico border fence into her installation titled, Displacement/Containment (2017). Quezada encourages the public to experience her artwork by stepping on a series of alternating rough and smooth cement tiles to suggest the soil of the desert along the southwestern borderlands contrasting with the modern built environment of U.S. cities. While viewers are not limited to inhabiting either side of the fence, the ground under their feet suggests that they are occupying both spaces simultaneously, absorbing the work from a liminal space. It is through the indeterminate positions of Mi Tierra’s monumental installations that the curators were able to add nuance to conceptions of belonging. Mi Tierra presents artists that ponder the complexities of place and identification, from colonial roots to a looming border fence.

Besides Quezada, Jaime Carrejo and Xochi Solis also demystify the fence as a locus for division. Carrejo’s One-Way Mirror (2017) installation is composed of eight one-way mirror surveillance panels that share the same proportions as the border fence. Attuned to Dan Graham’s Pavilions, Carrejo’s panels reflect the presence of the viewer with projections of the borderlands’ vast landscapes along the tall and angular walls on opposite sides of the space. The divisive nature of walls is reversed by arranging transparent mirrors where viewers freely survey the challenges of existing within both, yet still abiding on either side of the limits of territorial demarcation. The surveillance aspect of one-way mirrors is disrupted to give way to an unsettling transparency that blends both views into one.

As noted by Xochi Solis in the catalogue for Mi Tierra, existing in the topography of displacement along the borderlands informs much of her work, which can be said to influence the practice of the exhibition’s other artists as well. Solis’s large-scale gestural abstractions are fabricated out of fields of color applied to flat vinyl, which are then layered with magazine and book illustrations to create organic and abstract collages. Solis’s pieces are scattered along the towering walls of the DAM’s lobby, leading the eye to the exhibit above, creating a platform from which to approach the conceptual geography of the exhibit.

The topography of displacement is best represented by two queer artists whose installations’ fleeting nature took on the theme of perception by challenging notions of Mexicanidad in two strikingly different ways. Plexus No. 36 (2017) by Gabriel Dawe, as its title suggests, makes references to networks of blood vessels and nerves in the human body. However, as part of Mi Tierra, Dawe’s installation presents a different meaning too. The rainbow spectrum thread-structures create graduated fields of color that are activated by light in concert with the spectators’ movements. As one moves below this canopy, colors fluctuate in the air to form and then blend new color combinations. Dawe breaks with the hetero-white dominant history of minimalist sculpture in his installation by using the disruption of the color sequence as a commentary on conventional views of gender. He began to work with thread as a medium years ago in order to challenge perceptions of embroidery as an art form reserved primarily for women, and this is a culmination of that work to date.

Similarly, in Fridalandia (2017), Justin Favela utilizes color to comment on a different type of perception. His large-scale paper “mosaic” mural borrows from both the popularity of painter Frida Kahlo and the nationalist iconography of nineteenth-century Mexican landscape painter José María Velasco to criticize common perceptions of Mexico as an exotic “Garden of Eden.” As part of the Mexican art academy, Velasco introduced the language of national landscape to construct a sentimentalist image of Mexico and to produce a new sense of national identity within the then newly independent nation. Similarly, Kahlo’s images have been used as tourists’ passports to experience Mexico as a surrealist paradise. With these two artists as his conceptual base, Favela integrates several different landscapes depicting the Valley of Mexico to create a massive mural on three walls that serves as a backdrop for a replica of the set of the Casa Azul from the 2002 movie, Frida. His “piñata” technique and use of colored paper as a medium to recreate such iconic images reverses notions of “popular art” to challenge Mexico’s art historical canon. The installation, with its various parts and styles taken together, has the fragility of Mexican Baroque altarpieces that deceptively seem poised to crumble. The ephemerality of both Dawe’s and Favela’s work, and their distinct approaches to color and materiality, extend the topography of the exhibit outside the confines of the borderlands by offering fleeting landscapes that question identity through distinctive lenses.1

For all of the artists in Mi Tierra, the concept of belonging is not articulated as a binary equation to entertain one-dimensional perceptions of being Mexican in North America. Rather, these artists work through the confines of the border in order to articulate notions of physical, conceptual, and creative belonging. If Ruben Ochoa’s sculptures at the entrance of the exhibit serve as an indication to museum visitors, Mi Tierra explores the integrity of place by furthering conversations that extend beyond our current political fantasies. Ochoa manipulated fence posts to appear as growing vines spurting from concrete footings placed on the museum’s floor. The organic appearance of these industrial materials signals to the viewer that the meaning of belonging in Mi Tierra, like the materiality of his pieces, is a malleable artistic process that shifts with the exploration of each and every work of art. In the end, as Ochoa notes of his own work, Mi Tierra surveys “how we construct the places we inhabit . . . and how our awareness of these processes can better allow us to intervene in the making of our own realities.”2

Emmanuel Ortega (PhD, Art History, University of New Mexico) has lectured nationally and internationally on the topics of images of autos-de-fe, nineteenth-century landscape painting, and visual representations of the New Mexico Pueblo peoples in Novohispanic Franciscans martyr paintings. Springing from his research interests, Ortega has curated in Mexico and the United States. In 2015, Ortega partnered with the Museo de Arte Religioso Ex-Convento de Santa Mónica in Puebla México to curate two art exhibitions based on recently restored paintings from their permanent collection, one of which is now part of their permanent exhibits.