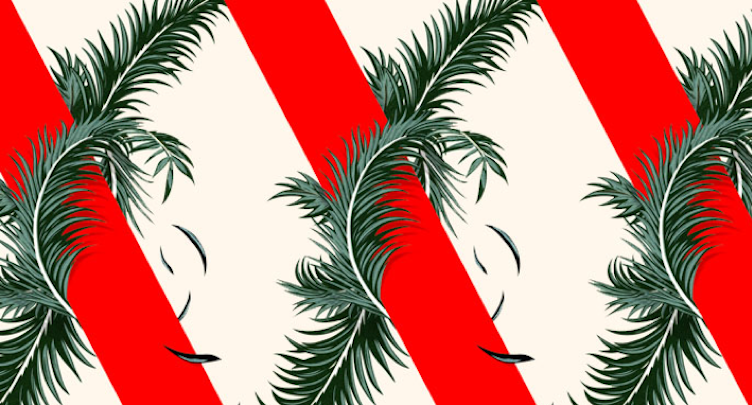 Benjamin J. Robertson, None of This Is Normal: The Fiction of Jeff VanderMeer. Minneapolis: University of Minnesota Press, 2018.

Within the opening pages of None of This Is Normal, critic Benjamin J. Robertson reveals his title to be a ruse. Robertson’s object of study is the fiction of Jeff VanderMeer, a writer allied with genres that are defined by abnormality and “weirdness.” Yet, as Robertson is quick to point out, the very weirdness that those genres would seek to explore repeatedly finds its echo in contemporary life. Despite his book’s title, Robertson asserts that all of this is, in fact, normal “because all of this is possible,” with “this” referring to what has felt, in recent years, like the collapse of modern norms resulting from events as diverse as Brexit and the election of Donald Trump to the Cubs winning the World Series (2). VanderMeer’s distinct brand of “new weird” fiction, Robertson persuasively argues, “helps us see possibilities beyond the norms we know” while suggesting how “something else might be possible” (3). Robertson thus examines resistance as a central theme or source of logic in this body of fiction, demonstrating how VanderMeer creates both subjects (characters) and objects (settings, hybrid beings) that appear resistant to human ontologies and ways of knowing.

Among a suite of claims that Robertson makes about VanderMeer’s oeuvre, the most compelling comes in the form of a critique of liberal ideology. Robertson points to VanderMeer’s construction of “weird” planetary spaces, such as Area X in the celebrated Southern Reach Trilogy, that refuse to accommodate or adapt to humans and their needs, arguing that such a geopolitics of the weird “overcomes a facile liberalism that understands all difference to be amenable to assimilation” (5). In crafting environments that resist human intervention (unlike our own planet earth in the age of the Anthropocene), Robertson sees VanderMeer as resisting liberal ideologies that posit assimilation and similitude as inevitable endpoints of social coexistence. It’s a bold claim that makes for a seductive approach to reading VanderMeer’s body of work, even as Robertson refuses to see settings like Area X as reducible to mere “representation[s] of the Anthropocene.” In lieu of such reductive readings, Robertson lobbies for “an abdifferent reading practice,” as he calls it, which “requires a care or concern that allows fiction to be itself, to be fantastic and to develop a nonexistent, impossible materiality”—a materiality, in other words, that cannot be reduced to what we already know about our own, material world (135).

This is not to say, however, that VanderMeer’s fiction isn’t about the Anthropocene, or climate change. Robertson reads a passage from Acceptance, the third novel in VanderMeer’s Southern Reach trilogy, with reference to “the threat of catastrophic climate change.” He reasons that, in the same way that the “cover story” for the existence of this “weird” planetary space (Area X) “involves environmental catastrophe of perhaps human origin,” so may the idea of the Anthropocene itself be a “cover up… a story that obscures a deeper war that is not a war” (140). Such observations are of a piece with Robertson’s somewhat rote protestations against the practice of symptomatic reading à la Frederic Jameson, which encourages critics to search for deeper, political meanings within the text. In the Southern Reach novels, as in the age of Anthropocene, Robertson shows how a deeper meaning might not even exist, rendering the project of its excavation and recovery symbolic at best. 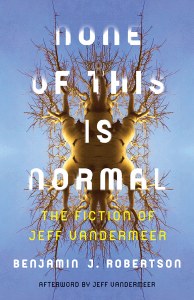 It is perhaps for this reason that Robertson himself sidesteps close reading throughout None of This Is Normal, relying instead on en masse readings of VanderMeer’s oeuvre. In Chapter Two, for instance, Robertson reads across VanderMeer’s earliest works of fiction, highlighting their inclusion within the “Veniss milieu,” or body of works connected to the fictional, dystopian city of Veniss. In Chapter Three, he does something similar with VanderMeer’s Ambergris novels, reading across two novels and a short story collection while assessing links between materiality and textuality. Chapter Four reads all of the novels in the Southern Reach trilogy at once, while in the Notes section Robertson bounces back and forth between Annihilation, Authority, and Acceptance with frenetic disregard for continuity, which, it turns out, is strategic. In the same way that VanderMeer resists “coherent narrative” and linear plot development in his fiction, so does Robertson employ a similarly “fragmentary and incoherent” style of critique as a means of representing that body of writing (4). As a strategy for moving within and amongst VanderMeer’s many fictional worlds, this is effective; as a strategy for situating one’s critical allegiances, it proves less so.

In outlining his own methods, Robertson makes selective use of critical examples. This might not be a problem were the claims that spring from this highly curated body of evidence less brazen or compelling. But given the scale of his arguments—about all of VanderMeer’s writing, about the Anthropocene and climate change, and about the genres of weird and “new weird” fiction stretching all the way back one hundred years to H.P. Lovecraft—the meagerness of Robertson’s critical engagements feels a bit ungenerous. En route to professing allegiance to new materialists such as Bruno Latour, Robertson cites from some of the most well-worn and greatest hits of old materialism, including Marx’s comments about “men mak[ing] their own history” from The Eighteenth Brumaire of Louis Napoleon and his inversion of the Hegelian dialectic from Capital.1 As such, he treats Marx’s oeuvre much as he does VanderMeer’s, viewing it as similarly amenable to acts of conflation and substitution despite the differences in these authors’ historical situations, subjects, methods, and styles. This is likewise the case with Frederic Jameson, who surfaces as the familiar whipping boy of new materialist critique but whose voluminous body of work on the subject of science fiction and its related genres merits only a passing reference. While such a strategy does not void Robertson’s arguments in None of This Is Normal, it reveals cracks within the overall scaffolding that invite questions about the tenability of such ambitious efforts.

As someone who has read and taught VanderMeer’s work, I came to None of This is Normal seeking corroboration and explanation. I came away with plenty of the former, even while Robertson refused to give me too much of the latter, and this proved to be a valuable takeaway, in the end. Robertson’s book helped me to grasp the extent to which the narrative of “need to know” structures but then also blocks our understanding of how the world around is changing in light of anthropogenic interference. What’s key is how an oppositional state, one of humility and not knowing—though it feels wholly alien—can actually provide a basis for enhanced understanding. In his “Afterword” to Robertson’s study, VanderMeer himself says something similar, commenting on his fascination with “irrationality” and the “complexity of natural systems.” VanderMeer registers a feeling of weariness in response to “people’s foundational assumptions about [the environment],” praising Robertson’s efforts to work towards understanding without all the baggage that sometimes results from presumed expertise (159-60). In this way, Robertson’s and VanderMeer’s outlooks align and coalesce in this book, lending support for their readers’ experiences of disorientation. The confusion is mutual, they argue, and also totally normal.

Sheila Liming is Assistant Professor of English at the University of North Dakota where she specializes in American literature, media ecologies, literary theory, and environmental humanities. Her first book, What a Library Means to a Woman, is forthcoming from the University of Minnesota Press while a second book, Office, is forthcoming from Bloomsbury through its Object Lessons series.