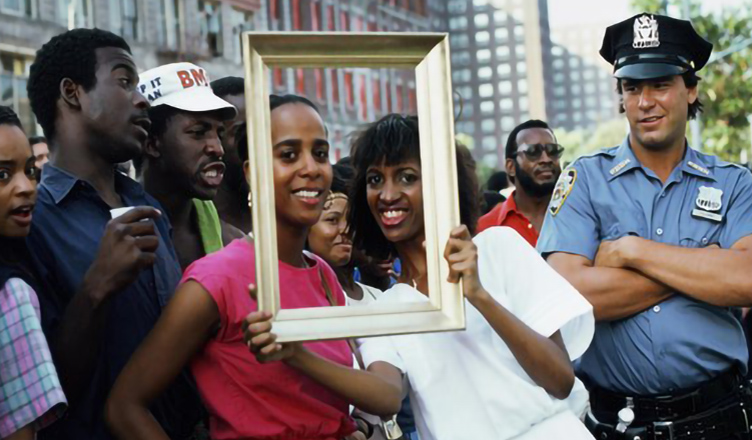 In 1934, Walter Benjamin gave a lecture at the Institute for the Study of Fascism in Paris entitled “The Author as Producer.” Benjamin argued that the most politically engaged art—and thus the best art—does not merely express an attitude toward “the relations of production of its time”; rather, it articulates its position within those relations. Of this, his friend Bertolt Brecht’s Epic Theater was paradigmatic. “[M]easured by the present state of development of film and radio,” Benjamin wrote, Epic Theater “is […] the contemporary form.”1

Performing Image, Isobel Harbison’s valuable first book, reads as an update of Benjamin’s influential lecture for the age of smartphones, social media, and ubiquitous connectivity. Like Benjamin, Harbison takes measure of contemporary performance practices by the media ecologies in which they are embedded. In so doing, she delivers a nuanced account of late-twentieth- and early-twenty-first-century art’s “contemporary forms.” Benjamin’s Brecht cedes the stage to the British artist Mark Leckey, who takes up a role we might term, adapting Benjamin, the author as prosumer.

In words that hover epigraphically over Performing Image, Leckey states: “I think of myself as a kind of ‘prosumer’, where you produce and consume at the same time, and [digital technology provides] the tools that prosumers use” (12, Harbison’s interpolation). This statement, made in 2008, roughly coincided with Leckey’s filmed performance-lectures Cinema-in-the-Round (2007) and In the Long Tail (2009), in which the artist, aided by a motley array of projected images, proffers exuberant meditations on the 21st-century mediascape. Leckey launches Performing Image’s programmatic first chapter, which sets out the book’s two governing issues.

The first is how art mediates relations between image prosumerism and embodied subjecthood. To address this issue, Harbison turns to the book’s titular concept. Performing Image (always capitalized) is introduced as “a portmanteau of two visual art mediums: performance and moving image” (20). Harbison recounts these mediums’ co-emergence in the 1960s and, as the book progresses, traces their entwined developments vis-à-vis television, video, the early Internet, and today’s digital media.

The second issue is how prosumerism and digital media have reconfigured the social life of images. The term prosumer is not of Leckey’s own devising; as Harbison recounts, economists have used it since the 1980s to express how producing and consuming have become largely indistinguishable in neoliberal society. Prosumerism amounts to “the neoliberal model of twenty-first century labor par excellence” (15), its effects keenly felt in the ways digital platforms transfigure users’ images into corporate revenue.

These two notions—Performing Image and prosumerism—are what Harbison’s book seeks, and occasionally struggles, to hold together. Four of the book’s eight chapters sketch a genealogy of “Performing Image works” from the 1950s to the present. Among Harbison’s earliest examples are Robert Rauschenberg’s stage designs of the 1950s, which encouraged dancers to interact with screens and sculptures combining abstract painting, collage, and everyday found objects. In these works, images (whether made or repurposed) are less seen than “incorporat[ed]” by dancer and viewer alike, establishing chiasmic relations between images and bodies (42). (A photograph of dancer Carolyn Brown performing with Rauschenberg’s Minutiae, her body half obscured by the totemic object, graces the cover of Performing Image.) Harbison connects works by Rauschenberg, Vito Acconci, Yvonne Rainer, and Adrian Piper to the rise of television in the United States. While TV made moving-image consumption a routine part of domestic life, video technologies, available to consumers by the mid-1960s, made it possible for “television audiences [to become] image-makers too” (37). With these observations, Harbison encourages the reader to connect early performance art and video art with the emergence of a proto-prosumerist American image culture.

Throughout her genealogy, Harbison brings issues of race, gender, and sexuality into sharp focus. One highlight is her study of Lorraine O’Grady’s 1983 performance Art Is. In that work, the artist choreographed a float at the Harlem African American Day Parade, furnishing her performers (including herself) with gilded picture frames and inviting parade attendees to pose within them for the camera. The resulting photographs capture the social scene immediately outside the frame as well as the smiling faces within it: many images include white police officers visibly amused by O’Grady’s antics. “Performance and photography are pitted together to capture this social tension,” writes Harbison, “picturing people, frame after frame, roving from O’Grady’s golden float” (61). Equally noteworthy are Harbison’s readings of Brandon (1998-99), Shu Lea Cheang’s meditation on transphobic violence in the form of a hybrid website-performance, and Martine Syms’s feature film Incense Sweaters and Ice (2017), which traces a media archaeology of black female performance from a Motown-style recording studio to smartphone selfies.

Harbison returns to Leckey in the book’s keystone fifth chapter, engaging him in a pas de deux with U.S. artist Frances Stark. Here, Leckey’s performance-lectures receive a fuller treatment. Harbison describes how his scattergun presentations confront audiences with “a dramatic enactment of prosumer impulses” by performing “contiguous cycles of image consumption and production,” often using images evidently sourced from YouTube and other online platforms (115). Stark’s performance-lectures and videos make a compelling counterpoint. Her euphemistically titled video My Best Thing (2011), for example, was made using open-source animation software and offers a deadpan interrogation of online sex.

Harbison connects Leckey’s and Stark’s prosumerist art practices back to Rauschenberg, but another midcentury antecedent is strikingly absent from her narrative: Pop Art. This oversight is curious: if any mid-twentieth-century artist embodied the prosumer avant la lettre, it is surely Warhol. Harbison might have found a precedent for Leckey’s Internet-baited “prosumer impulses” in Warhol’s love affair with television, masterfully chronicled a decade ago by Lynn Spigel.2 Moreover, Warhol’s filmography offers numerous meditations on the relation between performance and moving images that would have sat well in the arc of Harbison’s argument. His Inner and Outer Space (1966) and Screen Tests (1963-66) are two pertinent examples.

As well as orienting Harbison’s conceptual understanding of prosumerism, Leckey and Stark metonymize her ethical standpoint on it. Like the artists, Harbison wants neither to hail nor to condemn prosumerism, but to amplify its ambivalence. She reinforces this position in the two chapters flanking her readings of Leckey and Stark, which pause her art-historical trajectory to reflect on prosumerism’s vexed political valences. Chapter four centers on the ways social media corporations generate profit by licensing users’ images, an arrangement users technically consent to, but whose ramifications are buried in turbid legalese. But chapter six cautions against critics who see prosumerism as only exploitative. Such critics, Harbison argues, risk undermining different subjects’ positions to power, and universalizing the diverse and dispersed incentives behind prosumerism. Understood against a larger crisis in representation, prosumerism allows users to exercise my, her, their, our, instinct and desire to be seen as image among others, while also butting against, making a dint in, or shedding light upon more problematic systems and institutions, types, and stereotypes historically in circulation (141).

The point is fair. But it becomes unclear, at this stage, how Harbison sees prosumerism as different from notions of critical agency that precede neoliberalism. When O’Grady, Cheang, and Syms spotlight “problematic systems and institutions, types, and stereotypes historically in circulation,” are they acting more as “prosumers” à la Leckey or as “producers” à la Brecht? Ultimately, Harbison wants to have it both ways. Sometimes this makes for welcome ripostes to critical theory’s knee-jerk jeremiads. At other times, however, it leads her to lapse into shoulder-shrugging banalities. “At best, prosumerism might be felt as at once exploitative and socially enabling,” she ventures toward the end of chapter six (141).

Although the many dimensions of her argument do not always resolve, the range, ambition, and urgency of Harbison’s overall project are impressive and laudable. Indeed, if Harbison is making a case for Performing Image as the “contemporary form” of late-twentieth- and early-twenty-first century art, it is in many respects a compelling one. Still, her inquiry leaves important questions unaddressed. One—perhaps the most pressing—is how prosumerism has affected art practices across different geopolitical contexts. Harbison explicitly restricts her inquiry to the West, but even within this restriction (itself under-justified) absences glare. Performing Image‘s archive is profoundly U.S.- and U.K.-centric; continental European movements like Arte Povera, German Capitalist Realism, and Relational Aesthetics (which crystallized in Europe but is not exclusively European) are left out of the picture, despite all including performance works that trouble the production-consumption dichotomy in fascinating ways. Additionally, the book might have investigated how artists use social media not just for generating source material, but as a means of exhibiting and distributing their works. (It seems significant, for example, that for the past decade Leckey has been showcasing his work on his YouTube channel.) Such are some of Performing Image‘s blind spots. But they testify, as much as anything else, to the prodigious richness of Harbison’s inquiry.

Christian de Mouilpied Sancto is a third-year PhD student in Visual and Cultural Studies at the University of Rochester (USA). He is interested in the reciprocities between performance practices and computer-based media. He studied media studies and performance studies at Utrecht University and music composition at Goldsmiths, University of London and Eastman School of Music. His writings have appeared in peer-reviewed journals including Resonance, InVisible Culture, and Junctions.