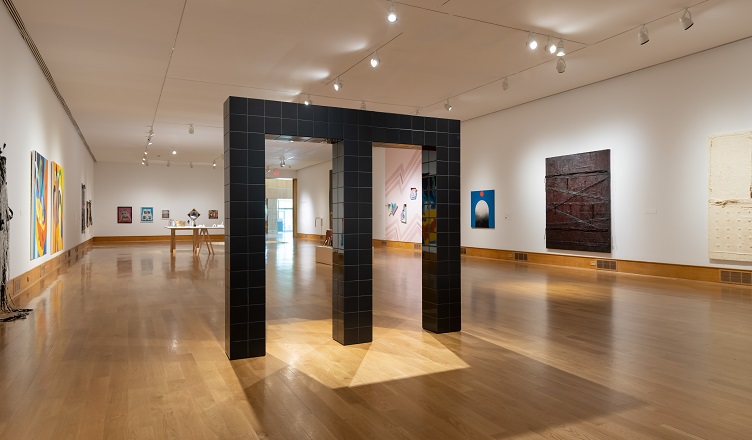 A small plaster slab lies on a white shelf. Embedded in one end of the brick-like object is a stuffed fabric protrusion comprised of pale yellow and cream colored floral upholstery. Roughly sewn and unevenly shaped, the textile extension sags in space. I have to bend over for a closer look. This artwork by Sheila Pepe, Hard and Soft Thing 2 (1994, reupholstered in 2016), is the first I encountered in the Queer Abstraction exhibition at the Des Moines Art Center. Curated by Jared Ledesma, this groundbreaking show comprises fifty objects in a wide range of media arranged in two galleries, representing the work of fifteen contemporary artists. Mounted on the entrance wall, Pepe’s object is juxtaposed with definitions for the terms “queer” and “abstraction.” Explaining the complicated history of queer as both a harmful slur and a reclaimed term of resistance for the lesbian, gay, and bisexual communities, the term’s complicated connection to the transgender community, and contemporary deployments of queer as a verb (“to queer something is to disrupt its intended purpose”), this text highlights the difficulty of language and classification that already connects queer to abstraction.

The title “queer abstraction” may seem a contradiction in terms, since direct representation and visibility have been so central to queer politics and the ongoing battle for LGBTQ rights and recognition in the public sphere. We have come to expect a politically viable queer art to include overt imagery of queer bodies, communities, erotics. But queer abstraction describes art practices that focus on formal and material invention rather than transparent visibility. Abstraction has become a tool of queer resistance, undermining the demand that we must always “show up” in ways that are expected, and providing a site to generate alternative spaces and worlds.1 Rather than simply a style or a “look,” I think of abstraction as an active and often destabilizing process that aligns with queering. To understand how this non-representational art queers, we have to dust off that old word abstract to make way for the active styling of a queer visual and material resistance. This is not an abstraction that blocks out connections to culture and politics, but one that uses form and matter to trouble normative categories and shift perspectives, perverting abstraction’s overloaded modernist legacy in the process.

Pepe’s Hard and Soft Thing 2 gestures to the kind of material excess, the seemingly minor or playfully frivolous qualities that constitute some queer deployments of abstraction. There are also monumental, and precisely rendered, works in the show. At a far corner of the gallery stands Prem Sahib’s Outer Wear (2015), a double rectangular arch of black ceramic tiles. While the exterior sides are covered in matte black tiles, the interiors of the arches are glossy and reflective. The arches are tall enough for me to walk beneath, and see myself in them. This piece, like much of Sahib’s work, reimagines 1960s macho minimalist sculpture as a space for intimacy: the object beckons us with seductive surface effects. The use of ordinary bathroom tiles further renders a hard, looming geometric object as a space of encounter both private and public. Rather than represent a body or sex act, Sahib’s object works in relation to the viewer’s body. This work might suggest the everyday spaces that are normally sites of body policing (binary gendered restrooms; cruising sites), but it doesn’t represent those bodies or spaces. It evokes the potential harm of abstraction—what it might mean to abstract a person into a concept, a generalized gendered sign—while at the same time creating other possibilities for pleasure in an indeterminate space.

A preoccupation with decorative pattern and surface play is shared across the exhibition. Sometimes, this takes the form of glistening surface effects. In the first gallery, Carrie Moyer’s acrylic paint with glitter on large canvases (2017) reworks hard-edged color field painting according to a queer sensibility. On the opposite wall, Harmony Hammond’s enormous rust-colored monochrome (2013) glistens as though still dripping wet, also speaking across the gallery to Sahib’s trio of monochrome aluminum panels covered in sparkling drops of resin (2014-2017). There is a shared refusal of purified techniques and materials, as medium specificity has given way to promiscuous mixtures of style and media. The synthetic, the minor, the “low,” are privileged here. Modernist icons like the monochrome and the grid, for example, are shored up and unsettled at the same time. Queer abstraction often takes up these older forms, with all of their historical baggage, and re-styles them in ways that are excessive—eschewing (or actively skewering) the all-too-serious and the straitlaced in favor of the exaggerated, the over-the-top, the unnatural, and the humorous.

The surface play of pattern and repetition is another shared tactic activated by the exhibition. Edie Fake’s meticulous drawings and paintings (2013-2018) utilize geometric abstraction, grids and ornamental patterns to build queer spaces and imagine other worlds. The patterns create networks and speak to the affiliations through which queer life-worlds are possible. Decorative pattern also thrives among the textile-based practices in the show, where the standard canvas is taken for the fabric that it is. In Phantsi Komngcunube (2017), Nicholas Hlobo weaves white ribbon and black leather across a grid of four blank canvases, connected by a central pulsating amalgamation of leather bulges and ribbons pouring down to the floor. Pattern and ornament become meditative and proliferative, spilling over as excessive materiality. Hlobo’s work resonates with John Paul Morabito’s delicate weavings (2016-2018), also predominantly black and white but with touches of red and pink for good measure; and with Jade Yumang’s felt, zipper, and fringe-covered protrusions (2014-2016). (Like the textile outgrowth in the Pepe sculpture with which we began, Yumang’s clustered protuberances might be traced back in part to the accumulations that Yayoi Kusama began making in the 1960s.)

Ornamental sparkle and exuberant repetition recur throughout the exhibition’s second gallery. Divided and extended to appear in multiple locations, Felix Gonzalez-Torres’s shimmering light blue, white, and silver beaded curtain (1995) cascades down from the many lofty entranceways and alcoves of the art center’s Brutalist I. M. Pei wing. Here we also find Tom Burr’s Deep Purple (2019, second edition). A new riff on Richard Serra’s infamous 1981 Tilted Arc, Deep Purple consists of a series of purple-stained wood panels bisecting the central gallery space and extending through the glass wall into the reflection pool outside. Resonating with Prem Sahib’s arches in the first gallery, these works transform the spaces they occupy and demonstrate the world-making impulse of queer abstraction.

These visual conversations moved me through the exhibition—a credit to Ledesma’s curating what he calls a “community” of objects. This exhibition is important, not only because it is the first major museum exhibition in the United States to focus on the concept of queer abstraction, but also because it takes abstraction seriously as a queer tactic that is both shared and multiple.2 The show successfully generates a series of interconnected formal and material strategies, and helps to illuminate some shared qualities of what is arguably becoming a movement. At the same time, we see diverse deployments of abstraction that challenge any singular definition.

The exhibition catalogue is also a notable contribution for its balance of differing interpretive models. Ledesma’s introduction and accompanying essays on each artist adeptly face the challenge of explaining this work to a larger public audience who may be unfamiliar with the term queer, and its potential applications to non-representational art. These interpretations take the artist’s identities, intentions, and voices seriously in a way that makes this confounding topic accessible to an audience hungry for queer content. David Getsy’s more polemical essay, “Ten Queer Theses on Abstraction,” is a compelling manifesto on some of the key issues at stake in the expanding discourse on queer abstraction, not just for artists but for those of us wrestling to articulate how it works. While Getsy’s theses are assertive, they are not foreclosing but valuably speculative and open.

Queer abstraction describes a driving force in queer art practice, but—as this exhibition makes clear—it is certainly not a singular style, and it prompts multiple interpretive approaches. I like to think of it as a tactic for refusing straightforward representation, so I am sometimes frustrated by readings that position works as implicit representations of bodies, genitals, sex, or some other signifying content (this was admittedly my response to some of the interpretive text in the exhibition). Somehow, we still want queer art to give us pictures of bodies and sex acts. There are plenty of other artworks that do this, so why not take abstraction seriously as anti-representational? Must all queer art be reduced to the body?

For example: Harmony Hammond’s “near-monochrome” paintings, of which this show included two examples from 2013 and from 2016-2017, elicit interpretations of their surfaces as vulnerable queer bodies. But their queering of the monochrome need not depend on re-inscribing the figural content it historically rejected. What if this modernist icon is undermined by Hammond’s refusal of purity in a material sense? These are not flat, neutralized paintings but thick strata of fabric and paint, punctuated by grommets, crisscrossing straps, and knotted cords hanging like paint-soaked tassels. One painting has a viscous wet appearance, another the texture of stucco. This excessive, sensual materiality imposes itself in space, and demands a more intimate spectatorship. They feel queer to me because I find myself compelled to explore their surfaces physically, and those unruly haptic qualities also work on me emotionally (surface damage can suggest harm and its remainders, without representing a skin). They are specific in their formal and material experimentation yet also allow for expansive possibilities, exploiting abstraction’s potential for transcendence without succumbing to universalism. This one possible reading is not to divorce the work from lived queer experience, the presumed danger of queer abstractions, but to suggest that being with the work itself might constitute a queer experience.

Hammonds’ works and many others in this important show suggest that queer abstraction can proliferate in meaning, making reference even while exceeding (spilling over, moving beyond) those references. Perhaps we can talk about generating queer material encounters, spaces, worlds—and still remain hopelessly attached to the queer figure, which is never, in any event, easily pinned down. After all, queer abstraction has mixed feelings too. Perhaps there is something in the work that makes us want to relate to it bodily, and perhaps we should investigate that intimate interpretive impulse. I will maintain, however, that we have much to gain by developing the language to articulate how abstraction operates queerly in formal and material terms.

Lex Morgan Lancaster is Assistant Professor of Art History at the University of South Carolina – Upstate. Lex’s book project, Dragging Away: Queer Abstraction in Contemporary Art, investigates abstraction as a tactic of queering in the work of contemporary artists who drag on a legacy of modernist form in order to generate material and political alternatives. Their related articles include “The Wipe: Sadie Benning’s Queer Abstraction,” in Discourse: Journal for Theoretical Studies in Media and Culture 39.1 (2017) and “Feeling the Grid: Lorna Simpson’s Concrete Abstraction,” in ASAP/Journal 2.1 (2017).