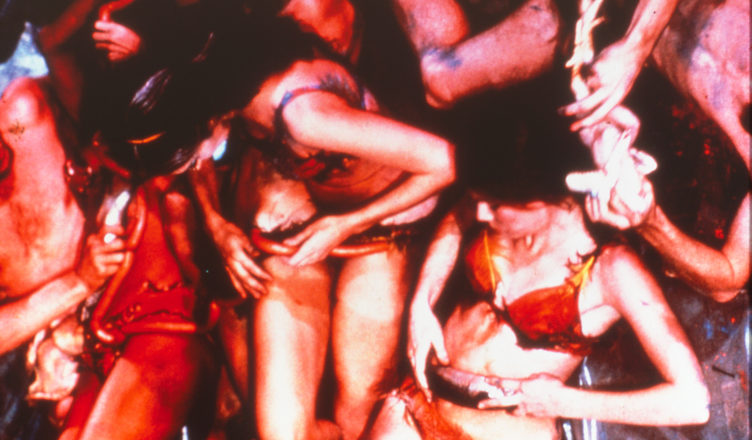 As Middleman notes, critics and curators assigned the “erotic art” label to work ranging from traditional painted nudes to experimental performance practices (10). Her own case studies are similarly diverse, underscoring the deep heterogeneity of artistic practice in the long 1960s. She focuses in particular on five New York-based artists who explore eroticism through highly differentiated, yet variously interconnected, approaches: Carolee Schneemann, Hannah Wilke, Martha Edelheit, Marjorie Strider, and Anita Steckel.1 These key individuals are not treated as isolated cases, however, as Radical Eroticism also attends to a larger network of artists, curators, activists, and writers who likewise engaged with the topic of eroticism.2 The insistence on multiple eroticisms challenges the modernist assumption of a normative viewer, even as it equally resists reduction to any one feminist theory.

Middleman’s analyses of two of the best-known practitioners, Schneemann and Wilke, consider eroticism in the context of performance, film, and photography. The chapter on Schneemann centers on her early collaborative works: the performance Meat Joy (1964) and the film Fuses (1964-67). As Middleman shows through extensive archival research, the seemingly spontaneous movements of Meat Joy were only possible because of their highly choreographed score (46-47). In combining visceral materials like raw meat and paint, Meat Joy created a sexual space that disintegrated social hierarchies and divisions between sexed bodies. Begun the same year, Fuses explored similar themes. Rather than recording a sprawling, multi-actor event, however, the film features footage of sex between Schneemann and her partner, composer James Tenney. It also includes interference that calls attention to the medium of film itself, such as streaks of light that flicker across the frames (50). As Middleman notes, while some Happenings used the nude as an object, within Schneemann’s formulation, the nude was also the artist, an innovation that breaks down “the male/female, eye/body binaries” (40). In both works, Schneemann merged the pleasure of sex with the pleasure of looking and blurred boundaries between agent, object, and viewer. 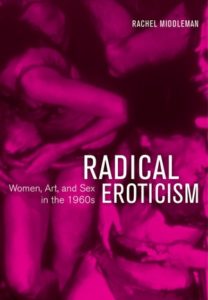 Middleman’s chapters on Martha Edelheit and Marjorie Strider show how eroticism enabled these painters to develop new approaches to painting after Abstract Expressionism. In Edelheit’s canvases, abstracted gestures sharpen into contorted figures, suggesting a renewed place for the body without reverting to idealized depictions of the sensuous nude. Female Flesh Wall (1964) is a representative example. Here, the painter has depicted herself among the colorful bodies, as if sketching the technicolor scene before her. Edelheit’s self-conscious inclusion emphasizes the female vantage from which these nudes were rendered and invites viewers to identify with her gaze.

Where Edelheit reintroduces figuration, Strider disrupts the modernist emphasis on medium specificity. Middleman’s chapter on the latter artist demonstrates core tensions in erotic work that positions women as both the object and the agent of the work. This knotted position has produced similarly contradictory readings of work by women as simultaneously liberatory and essentializing. Strider in particular has long been overlooked within histories of both Pop and feminist art because of her position as a woman artist and her ambiguous use of the pinup. In Green Triptych (1963), a bikini-clad woman is depicted with her breasts jutting from the canvas: the oversized sculptural appendages crudely sexualize the picture plane. Taking the notion of an idealized form to an extreme, Strider’s graphic style became the subject of contemporary criticism. Barbara Rose, for example, saw Strider’s work as representative of a new wave of “‘cold’ erotic art,” representations which pare down sexuality and sex organs into simplified forms (101). Middleman highlights the subjectivity of Rose’s reading and instead argues that Strider’s use of sculptural appendages “renegotiated the terms of painting and sculpture in work that hinged on gender and sexuality” (105). Strider’s use of eroticism offers a significant example of how Pop art and feminism can be commensurate.5

The concluding chapter on Anita Steckel outlines the ways in which erotic art in the 1960s set a foundation for the creation of more explicitly feminist artwork in the 1970s while also intervening in larger discourses about obscenity and censorship in the art world. Like Strider, Steckel also intervened within the arena of Pop art with her series Mom Art. In a piece from the series, Girl Scout (1963), a standing female nude is collaged atop a section of Thomas Eakins’s The Biglin Brothers Racing (1872). The nude balances upon the male figures’ heads and leans forward, acting as a guide as they row (152). New York Skyline (1971) similarly overlays the familiar image of the city with phalluses scaled to match the width of each building. Middleman attends to the reception of such works during Steckel’s 1972 exhibition The Feminist Art of Sexual Politics at Rockland Community College, New York. The show met with calls for censorship and charges of obscenity due to the portrayals of male sexual organs, while depictions of nude women went uncriticized—thus highlighting a pervasive double standard. The controversy led Steckel to form the Fight Censorship Group the following year. Counting both Wilke and Edelheit among its members, the collective advocated for women’s rights to produce sexually explicit artwork.6

Middleman’s readings disentangle threads that are typically subsumed under a general categorization of feminism, producing discrete historiographies of interrelated yet importantly distinct topics such as erotic art, the sexual revolution, women’s liberation, and the rise of feminist art and art history. In so doing, they attend closely to the complex situation of the featured artworks within their original socio-cultural contexts (29). These analyses are rewarding, but do come with certain costs. Middleman’s approach risks reproducing the era’s blind spots, particularly with respect to homosexual, queer, and otherwise marginalized subjectivities. One especially fraught area concerns the entanglements of race and eroticism. While Middleman mentions the contributions of Faith Ringgold, Lorraine O’Grady, and Adrian Piper, the central case studies focus primarily on contributions by white, heterosexual women artists. Attention to the work of women of color would open dimensions of the politics and aesthetics of eroticism not considered in this study.

Alyssa Bralower is currently a PhD Candidate in Art History specializing in modern and contemporary art and the history of photography at the University of Illinois at Urbana-Champaign. Her research interests include the relationship between performance and photography and artistic collaborations. She is currently writing her dissertation on Ellen Auerbach, an interwar photographer best known as one-half of the Berlin-based studio ringl+pit.