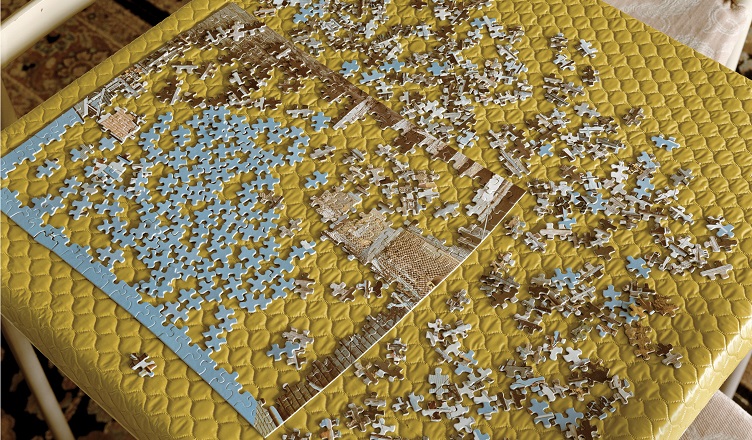 Review of Stephen Shore, organized by Quentin Bajac, with Kristen Gaylord
The Museum of Modern Art, New York: November 19, 2017–May 28, 2018

Stephen Shore’s America is empty. From his postcards to his large-format photos, Shore has long been preoccupied with the wide-open spaces of the American West and, like his contemporary Robert Adams, humanity’s smallness in relation to them. Stephen Shore’s America is also full of crap. I don’t necessarily mean that in the rhetorical sense—although that’s also true—but in the material sense. The tin and polyvinyl clutter of late-capitalist American culture often populates his frame. Christmas decorations, gas station marquees, toys, and soda cans are as common as human subjects.

The brilliance of the Museum of Modern Art’s current Stephen Shore exhibition lies neither in reconciling these divergent Stephen Shores, nor in settling on a singular Stephen Shore. After all, as the show’s curator Quentin Bajac points out in the introduction to the volume published to accompany this comprehensive survey, Shore’s career has always been defined by a lack of consistent style.1 “A photographer solves a picture, more than composes one,” Shore himself has famously written, pointing to the source of his stylistic multifariousness.2

Rather, the success of Stephen Shore is in its kitchen-sink approach. The show is immersive, a flood of images ranging from 3-by-5 Kodacolor photos mounted directly to the wall to enormous framed prints suspended from the ceiling. [Fig. 1] It spans Shore’s entire career and includes works from every format the photographer has adopted—from 35mm to 8-by-10 to Instagram—without tipping over into visual overload. In other words, the exhibition solves the “problem” of Stephen Shore by not solving it at all. And to the extent that Shore’s career has had a central subject, it becomes clear that it’s America itself, in all its majestic, kitsch glory.

Bajac and Gaylord’s curatorial principle—the refusal to resolve the riddles in Shore’s body of work—aligns with Shore’s artistic practice. After a stint in Andy Warhol’s Factory, Shore struck out on his own with an exhibition at the 98 Greene Street Loft in Manhattan. All the Meat You Can Eat (1971) is a collection of found photos interspersed with shots taken by Shore on a Mickey Mouse Mick-a-Matic toy camera. This hodgepodge was arranged seemingly without any particular logic. “Featured in the exhibition,” Bajac explains, “were police photos of crime scenes; postcards; pages from interior design magazines; erotic and pornographic shots of various types . . . . ID photos; pictures of pets; commercial portraits; press, fashion, and society photos.”3 In the only published review of the show, Gene Thornton called it “a healthy, if possibly somewhat unwelcome, reminder of the part that photography really plays in the world.”4

Thornton was correct. All the Meat aimed to restore everyday photography to a medium that had only recently split into “fine art photography” and basically everything else. The Museum of Modern Art exhibition faithfully reproduces the installation based on the original groupings. Stare at it long enough and a visual vernacular begins to suggest itself: high and low, beautiful and tawdry. The scopophilic assemblage of seemingly disparate images is now familiar to anyone who has clicked their way down a rabbit hole on Tumblr, Pinterest, or Instagram. And while the MoMA show is certainly more clearly organized than All the Meat, they share an all-inclusive ethos.

All the Meat also pointed the way forward for Shore in the early 1970s. In June of 1972, Shore set off with a Rollei 35 camera on a long road trip from New York to Texas that furnished the material for American Surfaces (1972-73) and established the color film aesthetic of the larger format work of Uncommon Places (1982). American Surfaces, Shore explained in 2004, was meant to record “everyone I met, every meal, every toilet, every bed I slept in, the streets I walked on, the towns I visited.”5 There is a disarming dailiness to this work; there are indeed a lot of strange faces, toilets, motel signs, and meals. [Fig. 2]

Taken together, though, these two projects—which span roughly 1972 to 1981—also comprise an important chronicle of a United States in the throes of rapid economic and social change. The depopulated town center of 2nd Street East and South Main Street, Kalispell, Montana, August 22, 1974 and the gas stations that sprawl to the vanishing point of Beverly Boulevard and La Brea Avenue, Los Angeles, California, June 21, 1975 already suggest the traumas of deindustrialization, the oil crisis, and the 1973 recession. [Fig. 3] Even a photo as unassuming as Badlands National Monument, South Dakota, July 14, 1973, which foregrounds a forest green Plymouth muscle car and a bile-yellow compact car against the Badlands’ regolithic strata, can be understood as a symbol of the environmental ravages of the twentieth century and of the economic contraction from which the United States has never recovered.

Overemphasizing this aspect of Shore’s oeuvre, however, would not do justice to the captivating weirdness that permeates his work. These photos are fun. Shore was an early adopter of digital photography, and since 2014, most of his output has been through his Instagram account. The exhibition’s draw surely has something to do with the ascendance of the popular social media platform. Many of the best Instagram photos—for example, Shore’s image of a goggle-eyed, frog-shaped pool float—underscore the surrealistic qualities latent in the photographic medium.6 As images wrenched from their original moment, the context that gave them meaning within a vast network of relations, photographs of even the most mundane objects and scenes often become imbued with strangeness. [Fig. 4] Photography, as Susan Sontag puts it, “confers on each moment the character of mystery. Any photograph has multiple meanings; indeed, to see something in the form of a photograph is to encounter a potential object of fascination.”7

Viewed in isolation, each of Shore’s photos offers such an instance of defamiliarization. But to experience this exhibition is to see these shards of Americana reassembled into something like a thematic whole. Bajac situates Shore in the “long American tradition of elevating the simple and the commonplace, in form as well as content, to a certain poetry and a way of life” that originates with Ralph Waldo Emerson and Walt Whitman.8 Shore’s vision is just as capacious, just as unsystematic, and might someday be regarded as equally essential to our understanding of American culture.

Josh Schneiderman is completing a dissertation on the poetics of ephemerality in postwar American poetry at the Graduate Center of the City University of New York. He edited the 1955-56 correspondence of Kenneth Koch and Frank O’Hara (Lost & Found, 2009), and his writing has appeared in Art in American, Contemporary Literature, Journal of Modern Literature, Los Angeles Review of Books, and Public Books. He teaches at Hunter College.