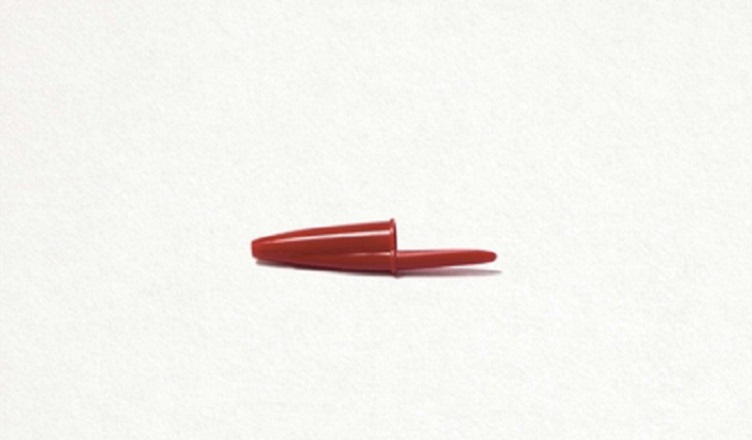 The popular narrative of the second decade of the twenty-first century tends to aestheticize its cultural and political turbulence, but we might find an equally useful heuristic in a corollary to this discord. Let’s call it the fetishization of authenticity. In a dysphoric, hypermediated moment, the clarity of “realness” and the figures who radiate it seem to offer recourse to the entropy. We see this in our national politics— which is to say in Donald Trump —and more recently in the consumer brands that populate late capitalism’s marketplace.

The latter case is strange and more instructive. A brief precis for the reader who doesn’t spend much time on Twitter, of whom I’m deeply envious: In the last five years, the social media accounts of multinational firms like Wendy’s, Sunny D, and Burger King have abandoned the conventions of marketing for a strange pretense to human prescience: embracing the absurd, memetic vernacular of the digital public; conversing with each other as friends do. In short, pantomiming authenticity, with only incidental interest in the task at hand (i.e. selling hamburgers, or whatever else).

The lesson here: at a certain point, what we understand as the aesthetics of authentic, coherent selfhood are only a product of the mechanical cultural infrastructure that they appear to counter. This is the observation that subtends Tim Groenland’s The Art of Editing: Raymond Carver & David Foster Wallace, which we might read as a refreshing and overdue exercise in cultural iconoclasm. The two titular authors persist in the American literary imaginary in beatified form: the names “Wallace” and Carver” evoke not only their referents’ sui generis literary styles but the imagined authorial personas that, in this fantasy, these styles faultlessly transmit. With the likes of Hemingway and Kerouac, they reify the seductive illusion of authentic, solitary literary genius; in The Art of Editing, Groenland euthanizes this fantasy by reminding us of an inconvenient fact: geniuses have editors.

The polemical edge to my summary is a tad unfair to Groenland, whose project chiefly deserves praise as one of measured and meticulous genetic criticism. The Art of Editing reads Carver and Wallace’s formative texts through the turbulent editorial processes that precipitated them, placing the genealogy of their drafts alongside the correspondences between the two writers and their respective editors. In Wallace’s case, it is Michael Pietsch, who worked with Wallace from Infinite Jest until the writer’s death; in Carver’s, Gordon Lish, whose own ambivalent mythological image in the narrative of postwar American literature proceeds from apocryphal tales of this fraught relationship. In both cases, the editorial task of “revision” assumes new literality: denying the “seductions of the supposedly stable text,” Groenland’s archival plunge forces us to understand two seemingly innovative aesthetic programs through the “necessary but invisible” presence of editors who indelibly altered their contours and intent (169).

The suspicious reader might be inclined to see Groenland’s project, in its outsize attention to two firmly canonized writers, as only a modification of the old hagiographic exercise. Outsize attention is outsize attention, no matter how it complicates the preexisting narrative. The appeal of this critique deserves reflection, especially in Wallace’s case. Just over a decade has passed since Wallace’s suicide; in that time, we have witnessed the popular commodification of what critics like Amy Hungerford call “Saint Dave”1: the iconographic figuration of Wallace as, in Christian Lorentzen’s words, a tragic “beacon of earnest self-help,” the literary intellectual’s Oprah Winfrey.2 Here, the image of Saint Dave is indistinguishable from—or illuminated via—his literary work, which in the worshipper’s account faultlessly extends Wallace’s supposed moral commitments, transmitted through an earnest dialogic contract with the reader. This conceit, the result of a feedback loop between hagiography and misreading, subtends a startling amount of Wallace criticism. Looking at the incipient field of Wallace Studies, Groenland locates the figure of the author himself at the “centre of the survey” (116).

Though the density of the personal archival material at hand sometimes occludes the distinction, The Art of Editing invests in Carver and Wallace as objects not of a biographical study but an allegorical one. In his attention to the role of the editor in literary production, Groenland seeks to return the old trope of the death of the author to the material plane of cultural history, reading the editorial process through the commercial and aesthetic trends of the “increasingly corporatized and data driven” publishing industry (9). Carver’s and Wallace’s monolithic figures in the cultural imagination speak chiefly to a paradox of the “contemporary publishing ecology” (8). The conceit of the author’s autonomous persona as “an essential element of a book’s presentation” (the author as “brand”) is only a marketing tactic—a relic of the very mercenary turn that subjects the author’s work to the consumer-driven editorial crucible.

But the seemingly sui generis literary styles that resulted from these editorial processes—Carver’s reticent minimalism; Wallace’s maximalist vigor—did more than inform their respective authors’ iconographic images. They also influenced the aesthetic genealogy of postwar American literature. This is especially true of Carver, whose hermetic paucity had by the end of the twentieth century become the aesthetic template of fiction taught in the university creative writing program. In his own account, Wallace, who had unhappily trained at the University of Arizona, built his style in a retort to this “evasive blankness,” which he believed foreclosed an affective valence true to its historical moment (25).

But Groenland’s genetic exegesis of Carver’s work reveals a hidden sympathy between the two writers. Carver’s early unedited drafts consciously appeal to a “sense of pathos” sustained by narrators “inviting the reader’s sympathy” (50-52). The story of Carver’s relationship with Gordon Lish is likely familiar to anyone who’s darkened the doorway of a contemporary creative writing workshop, but here it is laid bare. Groenland presents Carver’s original full-bodied paragraphs with strikethroughs through the phrases Lish excised. They read like censored war letters. Lish frequently rewrote Carver’s narratives altogether to recalibrate their affective project, denying emotional recourse to anguished characters to “minimalize the emotional appeal to the reader” (50). “The instant you offer an explanation is the instant you have sentimentality,” Lish once told the writer Tetman Callis (50).

The suggestion of Lish’s megalomania is tantalizing, but here only a suggestion. Groenland wants us to understand the texts in question chiefly through the process of editorial mediation at large: one adjacent at best to the coherent aesthetic project of a single individual. Authenticity is contingent, which is to say inauthentic. The Art of Editing is strongest in these theoretical gestures; its promising appeals to historicism at times are weaker. Groenland situates Lish’s indulgent editing “at least in part within the context of magazine fiction editing,” where spatial and aesthetic strictures abound, but the reader is left only half-persuaded and hungry for more of the historical backdrop that would firm up Groenland’s otherwise compelling study (57-8).

Still, The Art of Editing offers a robust retort to what Finn Fordham describes as the “romantic cult of the single autonomous author” (13). This intervention is particularly overdue in the realm of Wallace criticism, where, as the Wallace scholar Adam Kelly notes, there is an “implicit agreement” with “Wallace’s professed premise”—expressed only in a few offhand comments in interviews, but no matter—that “fiction…should be viewed not primarily in terms of aesthetic representation, but of ethical intervention.”3 Groenland’s occasional endorsement of Wallace’s supposed agential pretense does not impugn his project’s value here. In diffusing Wallace’s project across its fraught editorial genealogy, it suggests an impossibility—and indeed a naivete—to locating Wallace’s intent.

Groenland traces Wallace’s literary celebrity in part to the “hyperbolic” marketing campaign that accompanied the publication of Infinite Jest. Little, Brown preempted the commercial risks of publishing a dense and “gargantuan” (and in turn expensive) novel by spinning these traits as “essential selling points” (135). The marketing blitz centered on a mythos of Wallace himself, “communicat[ing] the impression of a formidably accomplished, intellectually brilliant author” (134). Wallace himself was deeply ambivalent about this. The metafictional flourishes of his 2011 novel The Pale King, Groenland argues, “explicitly dramatiz[e] a problem of mistaken identity” proceeding from the “struggles of editorial processes” (222, 225).

Groenland’s reading of The Pale King mostly avoids the tacitly hagiographic tack taken by other critiques: for instance, the interpretation that The Pale King’s “fragmentary nature” marks “a deliberate authorial strategy” serving the novel’s “poetics of incompleteness”4 (144). (The term “deliberate authorial strategy” begins to reek when we consider that the novel owes its “fragmentary nature” to the author’s premature death by suicide.) But if Groenland’s intent is to decouple the literary text from a coherent authorial persona, we find the best evidence in the very fact of the novel itself. The book we know as The Pale King began as a stack of drafts that Wallace organized on a desk before taking his own life. Pietsch, his editor, “proceeded to painstakingly edit the material into a publishable novel”—ultimately conceding that it was “not by any measure a finished work,” but publishing it anyway (146). 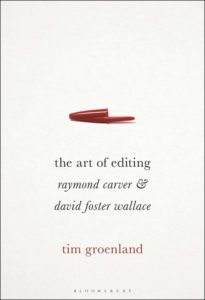 Groenland is too hasty in his dismissal of another critical line, which sees The Pale King’s publication as a commercial move meant—and here he quotes the critic Jeffrey Di Leo—to “profit from the notion and prestige of authorship” (168). The conflict of historical facticity here is less interesting than what I take to be Di Leo’s larger point. We might summarize it as Lorentzen did in 2015, upon the release of the fawning Wallace biopic The End of the Tour: “Nobody owns David Foster Wallace anymore.” The hagiographically-inclined critic could choose to read Groenland’s project as an attempt to locate the “real” Wallace—or Carver, for that matter—within the occlusive circuitry of editorial mediation, but The Art of Editing is more a study of that circuitry itself. It is, in short, an invitation to reconsider our statues.

Nash Jenkins received his M.A. in June 2019 from the University of Chicago, where his research examined new media systems as technologies of phenomenology and affect. Before coming to Chicago, he worked as a correspondent for TIME Magazine in Washington, D.C. and Hong Kong. He received his B.A. from Johns Hopkins University in 2015.