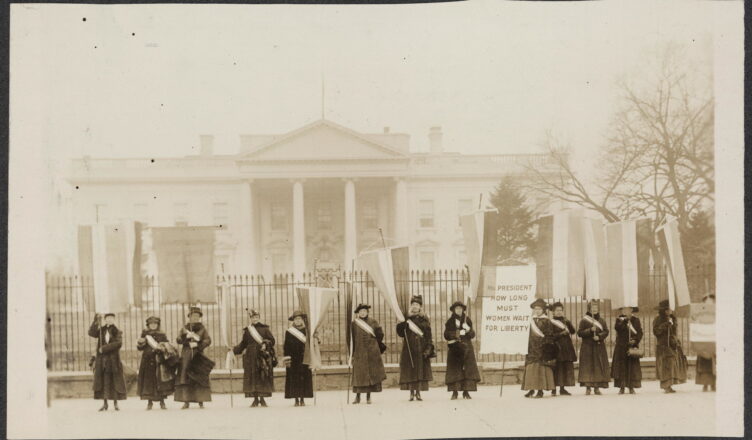 “Suffragettes” by U.S. Embassy The Hague is licensed under CC BY-ND 2.0.

We are fascinated with the singular narrative of “first of their kind” leaders—many of us feel the disappointment of deferred and compromised achievement of new kinds of elected representatives deeply.  How can literary, feminist, and interdisciplinary scholarship help us understand our desire for stories about the one outlier, the one success story, the one woman or other first of their kind at the top—such as in the role of US President, CEO of a Fortune 500 company, dean of a school, etc.—, while at the same time such stories seem so hard to come by? What alternative narratives might we turn to? Where can we look to manage our disappointment and continuously deferred gratification, our sense of lack and exclusion? Whether it is the protests against police brutality in the wake of the murder of George Floyd, the lack of a female candidate for this year’s US Presidency, or the vitriol against NY-14 Congresswoman Alexandria Ocasio-Cortez and other young elected leaders, any answer to how political change can be made and sustained, and the affective burden of it managed, feels elusive.

In her 2020 book The Fury Archives: Female Citizenship, Human Rights, and the International Avant-Gardes (Columbia UP), Jill Richards does not talk about the US Presidency or any other case study regarding the exemplary position of leaders. Instead, she spends eight erudite and wide-ranging chapters on how small, highly localized, and previously overlooked cultural archives can illuminate women’s political struggles in the twentieth-century transatlantic world. Going beyond a simple narrative of suffragette progress, she is instead interested in birth strikes, women’s committees, lesbian crimes, and other moments of political agitation through art and life. This allows her to locate “among women’s movements, socialist currents, and the avant-gardes, a radical alternative to liberal human rights discourses in formation at the same historical moment.”1

To sustain her focus on the small-scale, Richards turns to archives that document what she calls the ‘long middle’ of struggle: she reads plays by Martinican Ina Césaire and by US abolitionist Angelina Weld Grimké, a novel by the surrealist in Mexican exile Leonora Carrington and an unpublished novel about suffrage by Rebecca West, and photographs by genderqueer (in today’s vocabulary) French artist Claude Cahun. These works are not often attended to in scholarly work, and even less often brought together. Richards considers them along with unconventional objects of literary criticism, such as medical reports from the force-feeding of hunger-striking suffragettes, prison records from the women setting fires during the French commune and women revolting against colonialism in Martinique, museum displays by German artist Hanna Hoech, and notes from Committee meetings at the United Nations and the Martinican journal Woman in the City.

If this list seems a bit jumbled, and lacking an easily recognizable rationale, then it mirrors what reading the book occasionally felt like. The range of objects in The Fury Archives is truly impressive, and Richards tackles every object and text that she has excavated for analysis with great skill, but the reader sometimes gets herself caught in the long middle, groping for understanding and not quite seeing how everything comes together. Reading not only in English but also French and German—and always insisting that we must account for gender as well as race, sexuality, class, colonialism, and other positionalities and intersections of identities—Richard works with a series of highly specialized archives drawn from a wide range of material. These archives and this wide reach are needed to understand what happens behind and during struggles for rights-voting, citizenship, any kind of enfranchisement into the state.

The title The Fury Archives thus carries affective meaning and the idea that women are written in history as furies, not as sovereign subjects. It also hints that Richards’s main impetus is in some tension with feminisms that aim to operate in and with the state: “In the most classical literary sense, in the Oresteia, the Furies are the antithesis of democratic politics; their vengeful justice provides a counterpart to the procedural justice of legal institutions, where guilt is determined by evidence, argument, and citizen juries.”2 For Richards, then, the archives we seek must go beyond and around the state and other highly visible story lines.

Turning to early twentieth-century Anglophone suffrage movement—not focusing on the eventual right to vote that was granted but instead highlighting the process before this happened—Richards explains that “[i]t is true enough that in the salons and along the barricades, there were women who wanted everything, not just the parliamentary vote. By necessity this wanting involved rejection, antagonisms, opposition, but it also took on other forms more casual, friendly, daily, or minute.”3 Instead of the large goal of the right to vote, Richards is interested in the individual experience of the daily grind of working and struggling and she looks beyond the vote. She is committed to understanding the complexity of realities on the level of the individual who too often disappears in the larger narratives of history that focus on the big moments. For her, this is not a compromise of accepting less than the vote. Instead, this emphasis on process is necessary because even the right to vote – which might appear a large goal indeed – is still not nearly enough for women to become truly free, equal, and able to do whatever they wish to. We might think of Congresswoman Alexandra Octavio-Cortez casually being called a “fucking bitch” by a colleague passing her on the Capitol steps to understand that daily life cannot be fully understood through knowing formal structures, such as who gets to vote and who is elected.4 Richards suggests that there are other ways to think about social history and progress than a liberal narrative based on rights and the gradual expansion of the state’s protection to more people. Like much recent scholarship in women’s studies, race studies, and queer studies, The Fury Archives also argues that the lived reality of truly free women, queer, of color, and other communities and individuals is a more important focus for scholarship and activism than the enfranchisement for some, such as the state’s legalization of gay marriage or allowing certain individuals to join the military.5

In The Fury Archives, the answer to feminist literary studies cannot be found in large-scale transformations of the legal order; while those are important, they do not sufficiently account for enough of women’s, and everyone’s, lives. Like Saidiya Hartman’s Wayward Lives, Beautiful Experiments (2019), Richards presents life stories that are not recorded in mainstream history and the unearthing of which creates a more inclusive, accurate, and complete picture of history.6 These stories, usually about artists and activists, help us think about the present, which is always on-going and—except on rare occasions such as new legislation or Supreme Court decisions—consists of small-scale, incremental developments. In Richards’s keen analysis of ordinary moments in the past we may find affinities with the ordinary moment we are experiencing here and now, as scholars, feminists, and citizens.

In the epilogue, Richards quotes a poem by Diane di Prima: “if what you want is jobs / for everyone, you are still the enemy […] you are selling / yourself short, remember / you can have what you ask for / everything.”7 This socialist utopian asking for ‘everything’ comes less as a surprise here and more as a relief. The Fury Archives has crafted a narrative that is exhausting—both in the sense that nothing seems to be left out and that it leaves the reader momentarily bleary-eyed—and the book insists on the complicatedness of the world. In what seems like a counterintuitive move, but one that is well-grounded in feminist literature such as Carolyn Steedman’s Landscape for A Good Woman (1987), Janet Mock’s Redefining Realness (2014), Audre Lorde’s Sister Outsider (1984) and recent monographs like Sara Ahmed’s Living a Feminist Life (2017) and Emma Heaney’s The New Woman (2017), Richards insists that we need to account for the world’s complexity not by going large or grand, but by turning to the ordinary, the small, and the now to be able to account for the many perspectives and lived experiences that exist in it.8

With this in mind, it is notable that Richards avoided telling a progress narrative. In her 2011 book Why Stories Matter (2010), Clare Hemmings critiques feminism for operating in progress, loss, or return narratives, and instead suggests finding more flexible methods of doing feminism.9 Richards’s project is one that Hemmings could endorse; she gathers up diverse threads of women’s history without pulling them perfectly together into a single narrative strand. The Fury Archive succeeds because it “ultimately locates, among women’s movements, socialist currents, and the avant-gardes, a radical alternative to liberal human rights discourses in formation at the same historical moment.”10 But that finding is not the book’s main achievement. Its more important contribution to contemporary interdisciplinary scholarship is its ingenious choice of archives, its flexibility of reading methods, and, most crucially, its willingness to find results every day, rather than only on special occasions. Thus, Richards teaches us about methodology as much as results. If we want to think about women and the US Presidency, for example, instead of reading about the lack of candidates in a pundit’s article, a more useful source might be something like the novel Red White and Royal Blue (2019).11 We might mine for clues this story of the Mexican American son of the female US President, his love story with the British Prince of Wales, and the sense of community that has emerged around this book, rather than despair about the lack of a female candidate in this year’s presidential race.12 If we follow Richards, we see the great importance of uncovering even such hopes and possibilities of the past as have never been realized, since they may still be vital parts of our present. “I don’t turn to the historical past for lessons,” she writes, “so much as to sound out some of the narratives that have been erased or forgotten and understand why others have become so familiar as to almost seem like truth.”13

Angelina Eimannsberger is a Ph.D. student in the Program of Comparative Literature & Literary Theory at the University of Pennsylvania. She works on contemporary US women writers, novels and life writing, feminist theory, Socialist Feminism, and femininity and she is interested in women’s book clubs and diverse re-tellings of Pride and Prejudice.