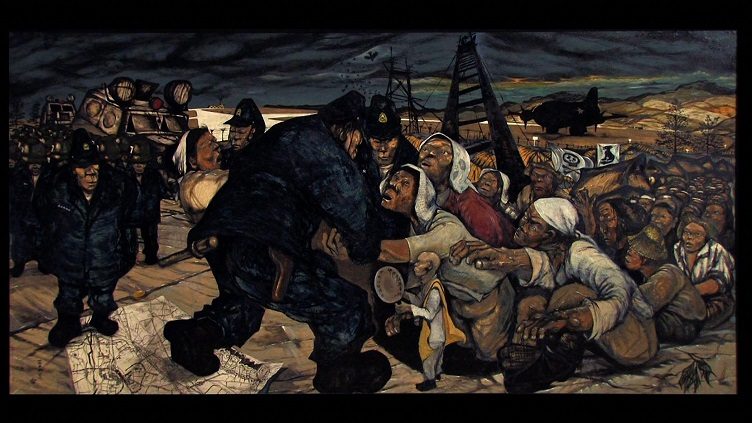 In April of 1956, Tanaka Shizuko, a five-year-old girl in Minamata, Japan, suddenly lost her ability to speak, walk, and see. Within days of her rapid decline, Shizuko’s younger sister also fell ill with similar symptoms. Other cases followed, in what would come to be known as the Minamata disaster: an epidemic of severe mercury poisoning that took the lives of 900 people and critically endangered thousands more. For decades, it emerged, the Chisso Chemical Corporation had been illegally dumping methylmercury into Minamata Bay, killing ocean life and contaminating the fish consumed by local residents. What appeared at first as a “strange disease” proved a direct effect of exposure to chemical waste.

The tragic events at Minamata figure centrally in Namiko Kunimoto’s recent volume, The Stakes of Exposure: Anxious Bodies in Postwar Japanese Art. This compelling study powerfully underscores the fragility of the body when confronted with a broad array of peculiarly modern threats. In so doing, it successfully destabilizes longstanding assumptions about the relationship between aesthetic experimentation and trauma in Japanese culture since the Second World War, and takes aim in particular at the existing scholarship’s near-exclusive emphasis on the catalytic effects of the atomic bombings of Hiroshima and Nagasaki. While Kunimoto’s book focuses primarily on the 1950s and ’60s, she readily acknowledges that relevant discourses surrounding gender, the body, and nationhood emerged within the Japanese visual field well before 1945. Indeed, art historians Bert Winther-Tamaki and Maki Kaneko have convincingly traced artistic engagement with the body to the Fifteen-Year War (1931-1945), foregrounding the determining role played in that period by such factors as the rise of Japanese nationalism; the emergence of sensōga, or “war painting,” as a distinctive category of production; and the rhetoric of purity surrounding the kokutai, or “national body.” Kunimoto’s study builds upon these contributions, demonstrating that the vulnerability of the body remains a significant preoccupation for artists through the late ’70s.

At the heart of Kunimoto’s study is a historically specific notion of anxiety. As she deploys it, the term refers to an ongoing state of “unease, apprehension, or solicitude” that is provoked not only by the wartime traumas of the recent past, but also by the uncertainties of the present and future (17). In addition to the Minamata disaster, Kunimoto especially emphasizes the import of the Lucky Dragon Incident of 1954, in which a Japanese tuna trawler was exposed to the radioactive fallout of U.S. hydrogen bomb testing conducted at Bikini Atoll, and the rising anti-nuclear movement and ANPO protests of the 1960s.1 Variously foregrounding the fragility of corporeal existence, these historical events inform the complex politics of representation that characterize Japan’s postwar era.

One important aspect of Kunimoto’s study concerns the idea of the artist and, more broadly, the parsing of individual and collective in the existing historiographies of postwar art. Resisting the prevalent tendency to align individualism with Western culture and collaboration with Eastern culture, she largely eschews the emphasis on art groups that has thus far characterized writing about the Japanese avant-gardes of the 1950s and ’60s, focusing instead on a succession of exemplary individual producers: Katsura Yuki (1913–1991), Nakamura Hiroshi (b. 1932), Tanaka Atsuko (1932–2005), and Shiraga Kazuo (1924–2008). Surveying a wide range of media, from collage and assemblage to performance, and spanning an equally broad gamut of modes of representation, from reportage to abstraction, these case studies cover a significant amount of territory. Each nonetheless crystallizes around a particular work that serves to emblematize the ongoing centrality of the body and its manifold vulnerabilities.

Chapter 1, “Katsura Yuki’s Bodies of Resistance” focuses on a prolific career spanning the decades 1930–1980, thereby disrupting the popular paradigm of periodization so often applied to Japanese art. Katsura’s prewar works such as Human I, 1938, undermine the traditional renderings of heroic masculine figures typically found in sensōga by abstracting and reducing human bodies to what Kunimoto calls “amorphous blobs” (24). The Stakes of Exposure nonetheless focuses primarily on postwar allegorical paintings such as Human and Fish, 1954, which it reads as powerful political manifestations of social and environmental issues. Created in direct response to the 1954 Lucky Dragon Incident, Human and Fish visualizes the physical effect of bodies under duress, portraying an abstracted human face gazing skyward toward what appears to be a radioactive cloud of dust—the phenomenon later termed shi no hai, or “ashes of death”—while surrounded by contaminated catch. A talismanic object for Kunimoto’s study as a whole—a reproduction graces the cover—the 1954 canvas “tests the limits between figuration and abstraction” (44). through the overlapping of human and fish bodies, as if to suggest a mutation of species. The visual slippage between the human and the animal yields a new, decidedly impure anatomy, compounding the overall air of uncertainty surrounding this incident. 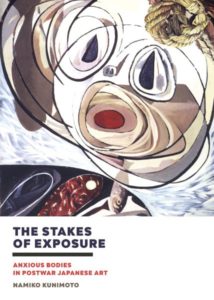 Chapter 2, “Nakamura Hiroshi and the Politics of Embodiment,” investigates the title artist’s representation of gender in his early and late-career paintings, works that Kunimoto reads as powerful rearticulations of masculine subjectivity. While trained as a reportage painter, Nakamura’s oeuvre ranges from representations of laboring male bodies and machinery (trains and planes figure prominently) to images of school girls that both invoke and critique a male gaze. Nakamura’s anxieties surrounding the status of masculinity are most evident in his late works, in which the displacement of the male body in favor of machines suggests the progressive disempowerment—even, Kunimoto suggests, the virtual  “disembodiment”—of masculine subjectivity. In one of his most famous works, Sunagawa No. 5, 1955, which depicts farmers protesting the confiscation of their land to expand the runways at the Tachikawa Air Force Base, Nakamura blends the opposing visual vocabularies of socialist realism and surrealism to illustrate the physicality and strength of the rebellious bodies, thereby marking them as sites of struggle against their “destructive loss” and positively foregrounding their “potential for transformation” (76).

Chapters 3 and 4, “Tanaka Atsuko and the Circuits of Subjectivity” and “Heroic Violence in the Art of Shiraga Kazuo,” examine the work and careers of two key members of the Gutai Art Association. While past scholarship on these artists has analyzed their work in relation to the larger Gutai collective, Kunimoto focuses on the formation of their individual careers by examining how these artists use their own bodies performatively to engage with the shifting status of gender and identity in the postwar era. In the first of these chapters, Kunimoto interrogates Tanaka’s complex negotiations around female subjectivity through a sustained analysis of Electric Dress, 1956. Investigating the material composition of Electric Dress—an elaborate contraption comprised of nearly two hundred hand-painted light bulbs—and attending closely to the specifics of Tanaka’s performances while wearing that garment, Kunimoto argues that the artist proffers a composite of machine and body, neither fully human nor fully electric, simultaneously illuminated and concealed: an unfamiliar and incomplete subject. With its sequentially flashing red, green, blue, yellow, and white incandescent lights, Electric Dress would materialize what Tanaka perceived as the instability and uncertainty of gender subjectivity through its circuitous representation of connection, disconnection, and repetition. The final chapter then explores the “multiple configurations of the masculine body” in postwar Japan, as manifest in Shiraga’s aggressive performances (20). Addressing the artist’s best-known work, the 1955 Challenging Mud, in which he thrashed violently in a viscous mix of stone, cement, sand, gravel, and clay dressed in nothing but a loin cloth, or his abstract painting Red-Haired Devil, 1959, in which the ferociously gestural application of crimson paint reimagines the violent actions of the heroic outlaws in the Chinese epic narrative Tales of the Water Margin, Kunimoto suggests that Shiraga “opened a space for critical encounters with his performance of overtly male roles: between man and medium, state and subject, representation and envisioned nation” (181).

Prompted by Kunimoto’s discussions of the Minamata disaster in the introduction and of the Lucky Dragon incident in chapter 1, I found myself wanting a more sustained analysis throughout the text of the ways in which artists grappled both with national anxieties and with individual identity in relation to ecological catastrophe in postwar Japan. Reconstruction and rapid economic growth ravaged the natural environment and created a seemingly untenable situation for future generations. What role, if any, did such concerns play in the work of Nakamura, Tanaka, and Shiraga? This study could also be strengthened by a more expansive consideration of the relationship between artistic engagement with the environment and the cross-pollination of various media and modes of representation in the postwar period. How do these four artists imagine the relationships between art, technology, the body, and an increasingly embattled “nature”?

Ultimately, however, the greatest strength of Kunimoto’s study is her critical engagement with and evaluation of the role of gender in the development of postwar Japanese art and visual culture. This is particularly important in relation to discourses of postwar reconstruction in which the status and contributions of women artists have been relatively overlooked.2 To date, most of the popular and scholarly attention paid to postwar female artists has tended to focus on the work of Yayoi Kusama (b. 1929) and Yoko Ono (b. 1933), two figures who established their careers while living abroad in the US and Europe and became representative of the internationalism of Japan’s modern art scene. Yet, as Kunimoto elegantly elucidates in her examination of Katsura Yuki and Tanaka Atsuko, there are many other female artists whose practices are absolutely vital to our understanding of the body as a site for creating, interrogating, and negotiating postwar national identity. This book not only adds to the growing body of scholarship on Japanese women artists, but also makes a significant contribution to the field of postwar Japanese art through its illumination of the complex negotiation around gender subjectivity and the body as a threshold of exposure.

Erin Schoneveld is an Assistant Professor in the Department of East Asian Languages and Cultures and the Visual Culture, Arts, and Media Fellow at Haverford College.