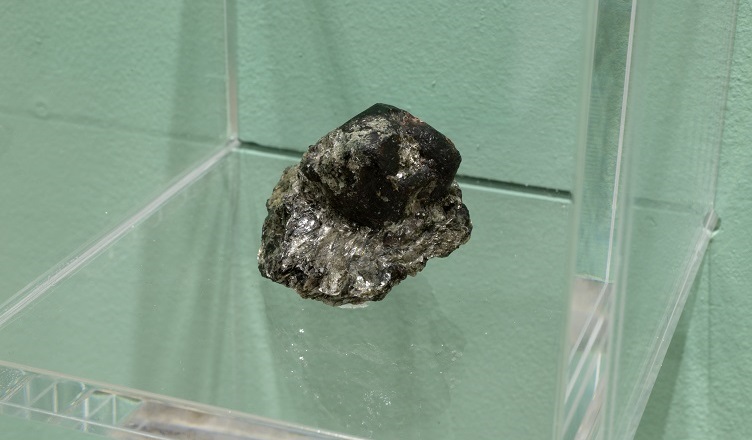 Stones are good to think with.1 Like no other natural material, rocks and minerals seem to embody the rift between the real and the imaginary, between what is eternal, tangible and certain and what is perhaps more slippery, ephemeral and changeable. The French philosopher and historian of art and science Roger Caillois, who was engaged in a lifelong dispute with Bretonian Surrealism, captured this chasm when writing in 1970 that stones are at the same time evident and impossible—immutable on the one hand and effervescent on the other.2

In her compact but rich exhibition Minerals of New York, which has recently come to a close at Leeds Arts University Gallery but will tour to The Hunterian at the University of Glasgow in the summer of 2019 (opening on the 12th of July), Ilana Halperin draws on this capacity of stone to act as material evidence of history on the one hand and as trigger of memory and the imagination on the other. For her multilayered research project, the artist, who was born and raised in New York City but moved to Scotland for her MFA at Glasgow School of Art and now divides her time between Glasgow and the Isle of Bute, has returned to her birthplace to assemble a mineral biography of the city of New York.

She reports how her curiosity was sparked by the so-called “Subway Garnet” in the collections of the American Museum of Natural History, a large piece of almandine garnet found eight feet beneath 35th Street between Broadway and 7th Avenue during a sewer—not subway—excavation in 1885 (“Sewer Garnet” has a different ring to it…). At an estimated 430 million years of age and weighing nine pounds, the gem is as rare as it is beautiful; but while it had been proudly displayed at the entrance to the Museum’s Mineral Hall after joining the collections in 1968, it was relegated to storage in the early 1980s because the display case was deemed too flat and “undramatic.”3 Halperin contacted the Museum’s Department of Earth and Planetary Sciences during a fellowship with National Museums Scotland and, on asking about the curators’ favorite objects, was pointed to the russet specimen the size of a small watermelon, which, according to the artist, inspired an intense feeling of wonder towards the place she grew up in.

This chance encounter recalls the coordinates of a previous project at Manchester Museum. During Halperin’s Alchemy Fellowship, discovering a cave cast in the geology department’s “Oddities Drawer” in storage with the help of Curator of Earth Science Collections David Gelsthorpe became the point of departure for the two-year project Physical Geology (2008-2009) as well as a continued exploration of the relationships between the corporeal and the geological. Serendipity and collaboration emerge as fixed points in Halperin’s research practice, which is characterized by a form of slow, longitudinal scholarship—a combination of research, fieldwork and studio practice with multi-media output that investigates processes of deep time while simultaneously mirroring them. 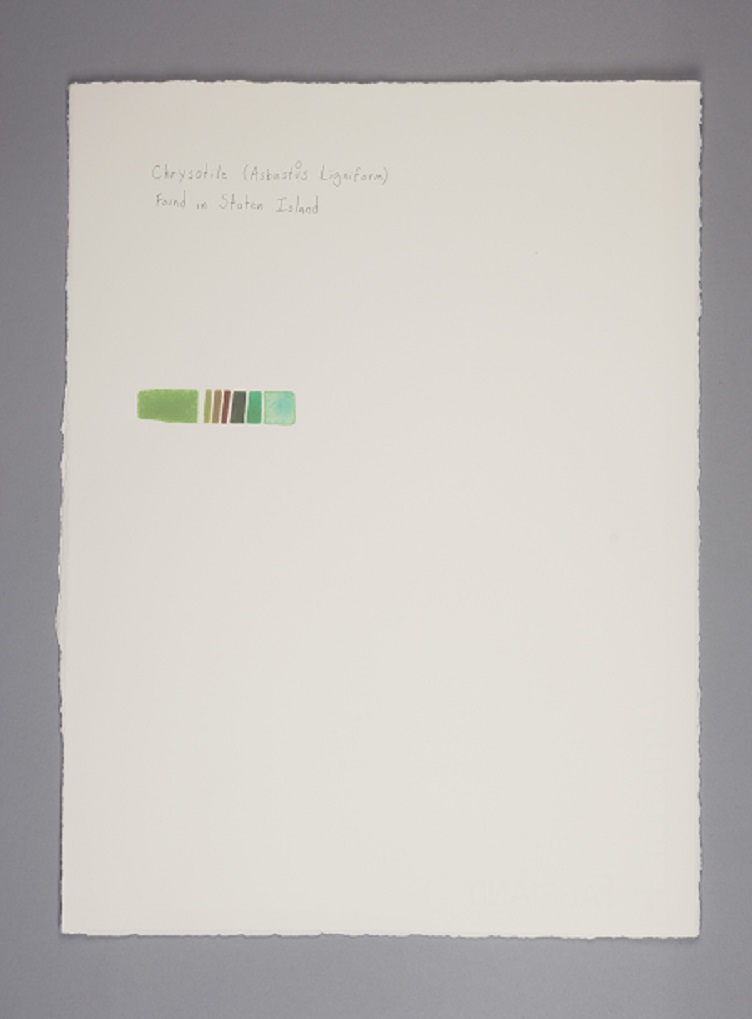 The main section of Minerals of New York consists of thirty-six graphite and watercolor drawings of minerals that were formed and found under and in the streets of New York City. These are carefully spread out across two walls in eighteen pairs. The highly carcinogenic chrysotile (a form of asbestos) retrieved from Staten Island is spaced apart from the other twin sets to reflect the geographical distance of the southernmost borough. The choice of medium is never accidental in Halperin’s artistic practice; thus the watercolor sections representing shades of color found in each mineral inevitably call to mind layers of sedimentary rock or soil. Each stone is broken down into an abstract watercolor rendering of its coloration—not unlike a slightly irregular, mineral Pantone chart—and a graphite drawing tracing its form, pattern, and shading. In a 2015 interview, Halperin defines a drawing as “a trace fossil of a moment, an idea, proof of life.” Reflecting on the relationship between the process of drawing and geological strata, or layers of sedimentary rock deposited over time, she continues: “Movement through space and time, layers of thought (material) accumulate. Drawing is like a stratum of activity—layers are laid down one upon another. It allows a process to develop through time.”4

Similarly, some of the watercolor segments recall the spines of books arranged on a shelf, while the meticulously sketched sheets of the Staten Island chrysotile resemble a stack of paper. Fittingly, Halperin draws attention to the fact that geologists refer to samples of mica schist as “books of mica” in her large, hand drawn narrative map accompanying the display:

As a kid, I knew mica from streets that glinted in the sun, playgrounds peopled by boulders that seemed made of silver and gold, rocks on the beach with layers you could peel open like pages in a book. A mineralogy curator named Peter told me mineral samples of mica are sometimes termed ‘books’. My mother remembers finding books of mica in the alley next to the building where she grew up in Brooklyn. Edgar Allan Poe lived across from Riverside Park when he is rumored to have written The Raven. If you find a shimmering stone in the area and leave it on the granite plaque on West 83rd Street, your book of mica becomes part of a memorial to the Warsaw Ghetto uprising. I imagine all these volumes together. A library composed of only rocks and minerals. Every layer another narrative.5

In Halperin’s narrative, laid out before us through the map and a slideshow of photographs presenting the street she grew up on (taken by her mother in 1986), the mineral biography of the city metamorphoses into an autobiographical account of the artist’s childhood and research project and, beyond that, a collective biography of the residents of New York. And, by association, the visitors to the exhibition.

Gayle Portnow Halperin’s photographs of the Upper West Side portray a Manhattan that does not exist anymore: family-owned shops and businesses that fell victim to the intense gentrification and urban renewal beginning in the 1980s, giving way to the luxury high-rise apartment buildings dominating the neighborhood today. Here the perceived permanence of stones formed over millions of years contrasts with the relative historical newness of the city of New York on the one hand; on the other, considering the long and slow life of geology exposes the profound uncertainty of our times, which are characterized by precariousness in the face of personal, political and ecological change—the latter even more pertinent in a city surrounded by water.

Echoing the gentrification and re-development of Halperin’s childhood neighbourhood, the American Museum of Natural History’s Harry Frank Guggenheim Hall of Minerals and Morgan Memorial Hall of Gems are currently undergoing a major refurbishment: the iconic dimly lit, cave-like 1970s display, which is often described by visitors as an oasis of calm and as inspiring deep, childlike wonder, is set to give way to a sleek, bright, modern design resembling a jewellery store.6 Halperin, who was born in 1973, fondly remembers the Hall of Minerals as “one of the main places I went adventuring and exploring,” and she describes the tactile, relational display as deeply affective and influential:

In 1976 the Hall had just been redeveloped and reopened. It had been built to mimic the interior of a cave and all of the rocks and minerals were spot lit. So […] there was an unadulterated, primary experience of being in this beautiful space where all these beautiful, incredible mysterious things were glittering in the dark. In the Hall you could explore and discover things, clamber over huge chunks of copper and jasper. […] that incredible feeling of encountering these rocks and minerals, and having access to them like that, definitely had a huge impact on my development as a human being.7

This sense of wonder and discovery pervading the old Mineral Hall at the AMNH was subtly hinted at in Leeds Arts University Gallery. Brass lettering on a jade green background, spelling out Minerals of New York, a Gems and Minerals display panel salvaged from the Museum, and a lump of mica sitting in a Perspex cube suggested a natural history museum rather than white cube setting.

Looking at the garnet enclosed by flaky mica surrounded by Plexiglas, we begin peeling back the layers of the historical, the geological, the (auto-) biographical, the ecological and the museological. The facets and rugged surface of the geological specimen, along with Halperin’s detailed drawings, appeal to our “tactile gaze.”8 With our curiosity piqued by the textures and material properties of the stones, our minds are prompted to fill in the gaps “with the treasures of memory and knowledge.”9

Minerals of New York rewards careful observation, a slow and curious gaze that remains open to the stories the objects seem to tell—whether they are personal or collective, scientific or fictional. Donna Haraway proposes sharing stories as a practice of thinking and caring in times characterized by uncertainty and ecological decline. Considering the natural archive of rock that records history in layers of sediment, we are left with the vital task of ensuring that the stratum of the Anthropocene does not indicate a boundary event evidencing mass extinction to future generations.10

Marion Endt-Jones teaches in the Department of Art History and Cultural Practices at the University of Manchester. Her research has focused on cultural histories of natural objects and the legacies of the cabinet of curiosities in Surrealist and contemporary exhibition display. She is the curator of Coral: Something Rich and Strange at Manchester Museum (2013-14), and her book Coral is forthcoming as part of Reaktion Book’s ‘Animal’ series.