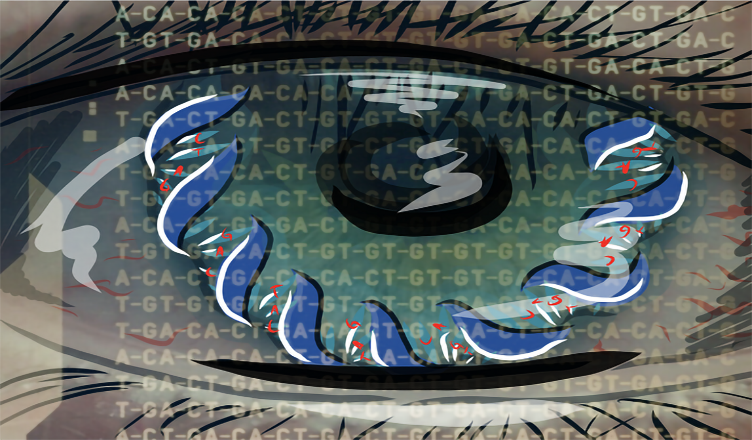 Kendra H. Oliver, “Blade Runner 7.”  One in a series of works inspired by a comparison of the 1982 version of Blade Runner to the 2017 sequel, examining how our perceptions of genetic privacy and identity have changed over time.

The popular BBC America series Orphan Black (2013-2017), which features a plot oriented almost entirely around genetics, has generated a rich and understudied fan culture. Chief among the platforms through which viewers engage with the show is fan fiction1—an open access, demonetized, and conversational medium especially well-suited to demonstrating what audiences think is important about a cultural form. Bioethics emerges as an important theme in Orphan Black’s fan fiction. By examining these fan-generated stories, we hope to gain a better understanding of how a popular art form such as Orphan Black affects public attitudes toward the ethical questions raised by genetic engineering.

For this paper, we conducted a review of the most popular fan fiction entries on the dedicated Orphan Black page of the platform Archive of Our Own, taking a purposive sample of the most-liked entries featuring content relevant to bioethics. Results on the Orphan Black page were sorted according to number of “kudos,” and the researcher reviewed the tags, descriptions, and content warnings for each entry, organized in descending order, until the 100 most popular stories exploring bioethical issues were collected. In this way, the data gathered was representative not of Orphan Black fan fiction as a whole, but of a particular kind of Orphan Black fan fiction. When people are talking about bioethics issues in Orphan Black, these are the things they are talking about.

The fan fiction that we reviewed calls on medical ethics in a wide variety of ways, whether explicitly as in the case of a story titled “First Do No Harm,”2 which invokes a principle dating back to Hippocrates, or implicitly as in the case of many stories concerning the romance between clones and the monitors who violate the clones’ autonomy by recording their biomedical data. The emerging themes were sorted into closely related bioethics categories, including autonomy, surveillance, identity and personhood, and privacy.

Autonomy was the most prevalent bioethics theme to appear in the 100 fan fiction entries that were analyzed, with just under one quarter of the stories featuring content related to this principle. They ranged in subject from tales of alternative universes in which the clones never became aware of their status as scientific experiments, to stories about the refusal of life saving medical treatment, to the reimagination of the clones as monitors of other research subjects. Suicide was a popular theme within these stories. Interestingly, the subject of reproductive rights did not rear its head at all, despite its thematic relevance to virtually every episode of the show itself. Instead, the topic of consent was the most prevalent of the autonomy-related themes, and the closely related topic of monitors was the most prevalent of the surveillance-related themes.

As one of the four foundational principles of biomedical ethics posited by Beauchamp and Childress in their influential text on the subject, autonomy is widely considered to be of utmost importance by the field of medicine. Defined as “a norm of respecting the decision-making capacities of autonomous persons,” this is a standard that is, at its core, concerned with informed consent and self-direction.3 Throughout Orphan Black the clones are consistently denied this decency, especially when it comes to making choices about their own bodies. This is a large part of what drives one of the clones to commit suicide in the pilot episode of the series—by doing so, she not only escapes the controlling grasp of those who continually violate her agency, she also asserts her own autonomy one final time (arguably in the ultimate and most extreme way). The same can be said of MK, a clone who in the final season of the show chooses to remain behind without her sisters to face the brutal wrath of her antagonist, knowing that to do so would amount to a death sentence. She is tired of spending her life running, and thus makes the ultimate decision for herself and her body in one final act of self-determination: to die on her own terms.

The category of surveillance was the second most popular after autonomy, with appearances in 14 entries. Monitors provide one of the clearest examples of the intersection between surveillance and autonomy across Orphan Black’s five seasons. Monitors are hired by the clones’ “maker,” a rogue scientific research institute, to secretly track nearly every detail of their lives and biology. Often, a clone’s monitor is someone very close to her, such as her husband or romantic interest. These people are paid to conduct medical examinations on the clones as they sleep and to report their activities to the bio-corporation that created them. We first realize that this sort of violation is occurring at the same time the clones do, when one of the characters wakes up from what initially seems like a bad dream about a forced medical examination, only to cough up some kind of implant as she’s brushing her teeth. The depiction of the clone regurgitating a device implanted in her body without her consent is deeply disturbing, and it resonated with viewers who identify with the characters.

Fans take storylines like these and run with them. There are times when what is happening on screen in Orphan Black is obviously related to bioethical discourse, and there are others when this connection is presented in ways much subtler and more abstract. In this respect, to write fan fiction is to reify these more obscure bioethical violations. Although a variety of moral questions are clearly raised very intentionally by the show’s creators, engaged viewers are the ones who determine Orphan Black’s impact in the end. Fans make meaning, both of the source material they love and of the fictions created in response to it. The generative and collaborative nature of fandom shifts the power to make decisions about what matters away from the producers of a television show and toward its audience, who then claim a degree of creative autonomy for themselves. Fan fiction writers utilize this agency to advocate new interpretations of Orphan Black that are then shared and accepted across a large and diverse community, marking a novel process of meaning making. This increasingly common practice enables fans of Orphan Black to collectively shift their focus to the principle of autonomy within their own world, the show itself, and countless alternative universes.

Ayden Eilmus is a senior undergraduate student at Vanderbilt University studying anthropology, philosophy, and medicine, health, and society. After graduating, she intends to pursue a PhD in medical anthropology.