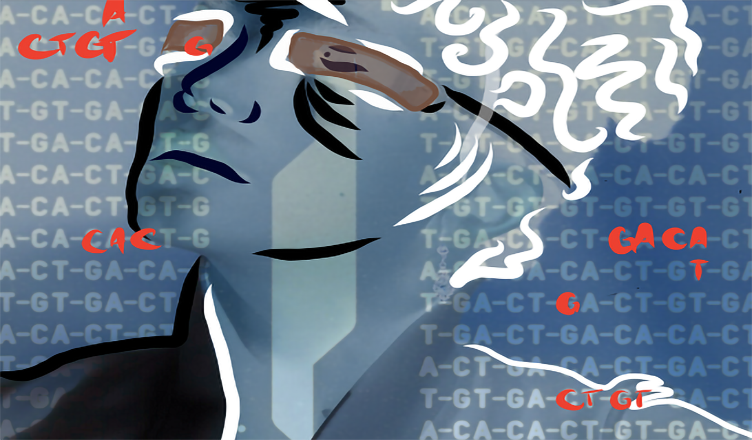 Kendra H. Oliver, “Blade Runner 3.” One in a series of works inspired by a comparison of the 1982 version of Blade Runner to the 2017 sequel, examining how our perceptions of genetic privacy and identity have changed over time.

Near the end of Christopher Nolan’s Interstellar (2014), Joseph Cooper (Matthew McConaughey) wakes up on Cooper Space Station, proud of having completed his decades long interstellar mission and honored that a space station had been named after him. His mistake. The Cooper Space Station was named for the daughter he left behind on Earth.  Almost a hundred years later, his daughter, Murphy Cooper (Jessica Chastain), has forged her own path and saved humanity from extinction, and is now immortalized in the name of Cooper Space Station. Murphy’s role in Interstellar (2014) began as a vulnerable child, whose main purpose in the plot was to complicate her father’s decision to leave Earth. In the course of the movie, however, she earns her place as an independent heroine and an empowered woman, eventually becoming the matriarch of her own extended family. Murphy’s story begins and ends with her place in a family setting, situating her firmly in a gendered social role and the reproductive cycle, despite her character having many other defining features. Independence within the context of conventional structure nicely defines the new position of female gender roles in twenty-first century popular cinema.

As a contribution to our project’s goal of understanding the representation of genetics in contemporary culture, we decided to evaluate the roles provided for women in the fifty highest grossing films of the last two decades that feature genetic content. Nearly half of these films are blockbusters based on comic book superheroes, followed closely by science fiction films in the vein of Jurassic World (2015), Star Wars (2002), and Star Trek (2002). A few are dramas set in the contemporary world (My Sister’s Keeper [2009]), comedies (Austin Powers in Goldmember [2002]), or thrillers (The Bourne Legacy [2012]). With rare exceptions, genetics is merely part of the premise of the film, not an explicit theme or subject matter. Still, the presumption that audiences will accept genetic engineering or mutant powers as the launching pad for the action—borne out by the success of these works at the box office—is telling. After more than a hundred years of cinematic depictions of genetics,1 popular films can count on genetic motifs, however speculative or scientifically inaccurate, to serve the needs of characterization and plot with little explanation. By registering at the level of conventions, they often inflect other conventional aspects of the representational world, particularly those involving biology, gender, sexuality, and reproduction.

With one exception (My Sister’s Keeper), none of the fifty films in our study focus on what used to be called “women’s issues.” Perhaps that fact situates women in an analogous position with genetics in these blockbusters—they are there, the audience notices them from time to time, but viewers generally do not have to pay close attention to them to grasp their role in the plot. For that very reason, we thought it might be revealing to apply two well-known internet tests to the women in these films and gauge how these tests relate to movie ratings. The first and more widely known is the Bechdel Test. To pass, a movie must (1) have two named female characters who (2) talk to each other (3) about something other than a man.2 An intentionally low bar, the Bechdel Test provides a very simple look at representation within a movie, yet some movies fail the Bechdel Test despite having an empowered leading female character. The second test, the Mako Mori Test, was created to address this short-coming. Inspired by the strong lead woman in Pacific Rim (2013), this test examines the independence of a female character. To achieve a passing grade, a movie must have (1) at least one female character who (2) has her own narrative arc that (3) is not supporting a man’s story.3 To compare the two tests, consider the Bechdel Test as something like a participation ribbon, which children get for being part of a team, and the Mako Mori Test as an MVP trophy a child earns based on individual talent, regardless of the rest of the team. That said, the Mako Mori Test embodies in its very structure the new position of women in contemporary blockbusters—empowered, yes, but still largely constrained within societal structures of heteronormative reproduction and gender norms.

Our data collection for both tests was grounded in internet sources as a way to evaluate public opinion rather than impose our own measures. The Bechdel Test data was largely drawn from a crowd-sourced website that provided ratings for more than 8,000 movies.4 The Mako Mori Test data was determined using a diverse range of internet sources and supplemented by our own viewing when necessary. To compare audience reactions between movies passing and failing these tests, we collected the IMDb ratings for each movie from males, females, and all US users. We found no significant relationship between passing the Bechdel Test and the rating the movie received. However, both female and US ratings were higher on average for movies that passed the Mako Mori Test. For female ratings in particular, a movie that passed the Mako Mori Test had an average rating that was 0.48 points higher than a movie that failed, an especially significant finding considering that all movies’ ratings ranged within 4 points of each other.5

Our findings reflect a desire from women to see independent and autonomous female characters, as measured by the Mako Mori Test. The Bechdel Test may have been significant in the 1980s when it was first introduced, but having women simply speak to one another is no longer enough. The IMDb ratings rose when movies featured independent women, signaling a preference not merely for the presence of women but for the prominence of women. While twenty-eight of the fifty movies we examined passed the Mako Mori Test, only six movies had female protagonists, a reminder that there is a difference between featuring women and having women be the center of attention. It is unclear from our research if this trend is true across all movie types or is more prevalent in movies with genetics content, which inevitably has a special bearing on reproductive matters.

Interstellar (2014) has a second leading female character: Dr. Amelia Brand (Anne Hathaway). The daughter of the mission’s lead scientist, Amelia Brand is frequently the only woman in the room. In the beginning of the movie, she has a presence of the sort measured by the Bechdel Test: she is there and she sometimes speaks. However, as the movie progresses, she becomes an empowered female voice who clearly passes the Mako Mori Test. Brand is brave and strong, and yet her final scene is shaped by her longing for her deceased lover and turns on the repopulation of the human species via the canister she bears containing a biobank of human genetic material. Both Brand and Murphy are forceful women who are heralded as heroes, but their stories are situated within their roles as daughters and their roles in the reproductive cycle, whether on the level of the nuclear family or on that of the species. Receiving one of the highest IMDb ratings in our database, Interstellar both reflects the power of strong women and returns to the tradition of centering on daughters, wives, and mothers.

Alice Lillydahl is an undergraduate student at Vanderbilt University majoring in Public Policy Studies with a minor in Women’s and Gender Studies. She joined GetPreCiSe in the summer of 2020 as an undergraduate research assistant. She is interested in how genetics interact with identity, particularly for women and LGBTQ+ individuals.