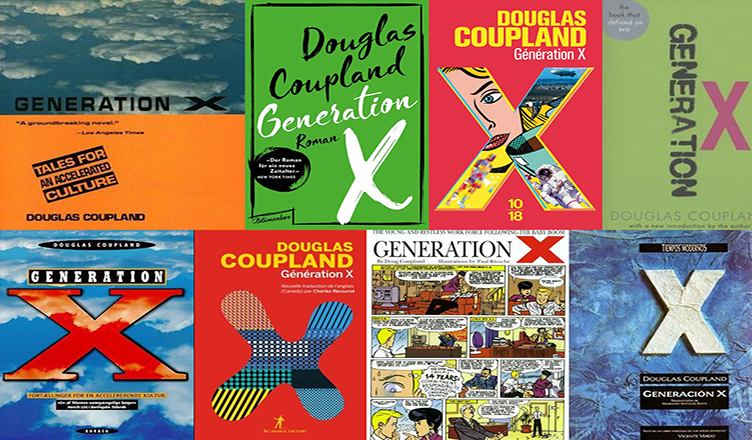 In our collaborative work together, Douglas Coupland, Hans Ulrich Obrist and I endeavour to give names to the effects of ‘procelerated1’ change in the present moment. These effects have come to govern our external and internal lives.

The sum of these sensations is ‘Change Vertigo’: that unsettling sense of drag where the future arrives at a faster pace than our psychological, emotional and political capabilities can cope with.

It’s worth mentioning here that Doug’s debut novel, Generation X, had a subtitle: Tales from an Accelerated Culture. Even then, at the tail-end of the 1980s, and the start of the 1990s — years before most people on earth would hear the word ‘Internet’ for the first time — Doug sensed history was accelerating. The Soviet Union was nearly over. Capitalism was financialising. Fast food was getting faster, which made McJobs even crummier.

But in the wake of that acceleration, a generation came into adulthood that belonged neither to their parents’ Boomer past, nor to a better future on the horizon of the year 2000. In a sense, Andy, Dag and Claire were Generation X’s representatives of pre-Internet, Change Vertigo.

In 1991, a few months after Generation X had been released, Doug told The Boston Globe, “I just want to show society what people born after 1960 think about things.” Born in 1961, Doug would turn 30 years old a month after this interview was published.

In 2015, Doug, Hans Ulrich and I assembled a book called The Age of Earthquakes. Our mission was to update Marshall McLuhan/Quentin Fiore/Jerome Agel’s The Medium is the Massage from 1967 to the Internet immersive 2010s. In particular, we were interested in how the atomisation of time into smaller and smaller micro-units (e.g. the two second refresh when you drag your thumb from the top of your phone screen in a social media app) creates ‘The Extreme Present.’ Existence increasingly occurs in this heightened state of suspension between a past that you automatically upload to The Cloud, and a future that is already happening right now.

We also write that, “The 89plus generation — born after the Berlin Wall came down and the Tiananmen Square protests erupted — have grown up entirely in a world of failing economics and politics. THEY SENTIMENTALIZE NOTHING.” In this sense, The Age of Earthquakes is a guide to the world inherited by Generation Y, at the same age, approximately, that Doug was when he wrote Generation X.

On the back cover The Age of Earthquakes, states, “You are the last generation to die :-/”

Since 2017, the three of us have been developing a touring exhibition2 and graphic novel about another new term which we call, “The Extreme Self.” This tracks the mutation of personhood inside the “extreme present.” These mutations are a feature of “Emotional Capitalism,” where each person plugged into the global communication media network has become a precious resource. Each of us is calibrated to produce statistics, with likes, and views, etc. Everyday life is now an arena where the individual creates, shares, monitors, and reinforces stats at an incomprehensible scale, speed and impact.

Since the extreme self is about how our interior worlds shape the exterior world, the fallout of the Covid-19 pandemic can also be understood through this prism. New conceptions of selfhood and crowds — increasingly virtual, due to the dangers of mass physical gatherings — inform responses to the pandemic all over the world, in rippled ways. We find ourselves at a unique point of historical mutation — driven by the confluence of a biological virus and advanced social media.

Recently, babies born during the pandemic have been coined “Generation C,” or, more ominously, “Generation O,” where O is for “Omega.” As in, the last generation to survive before total climate collapse.

Before the pandemic had broken out, Doug, Hans Ulrich and I had decided that the final sentence of The Extreme Self should be, “You are the first generation that will never die.” This may now sound contentious, absurd and impossible.

But, what is a “generation” today? Can a generation still be bookended by dates on a timeline? Or is a generation more amorphously defined by its relationship with pervasive technologies and media incarnations? And why is there no equivalent to the derogatory diss, ‘OK Boomer’ aimed at Gen X-ers from Gen Y and Gen X?

This is a brief tour of how both of our concepts — the extreme present and the extreme self — can be traced back to Doug’s Generation X. Why? Because that book assiduously described the link between epochal shifts in history with new structures of feeling. And, the necessity for new words to describe those new feelings.

As Doug told Flash Art in a conversation mid-way through 2020, “The sequence is that technology changes the person, and then those changed persons collectively, consciously or unconsciously, create philosophy.”3

Shumon Basar is a writer, editor and curator. He’s the co-author of The Age of Earthquakes: A Guide to the Extreme Present, with Douglas Coupland and Hans Ulrich Obrist. Together with Coupland and Obrist, he co-curated the large scale exhibition Age of You at the Museum of Contemporary Art Toronto and Jameel Arts Centre Dubai, which previewed their following book, The Extreme Self. His (co)edited books include Drone Fiction, Translated By, Hans Ulrich Obrist Interviews: Volume 2, The World of Madelon Vriesendorp, Did Someone Say Participate?, With/Without and Cities from Zero. Shumon is Editor at Large at Tank magazine and Contributing Editor at Bidoun. He is Commissioner of the Global Art Forum, an annual transdisciplinary summit held at Art Dubai; a member of Fondazione Prada’s “Thought Council”; and has also been Adjunct Curator at Art Jameel.