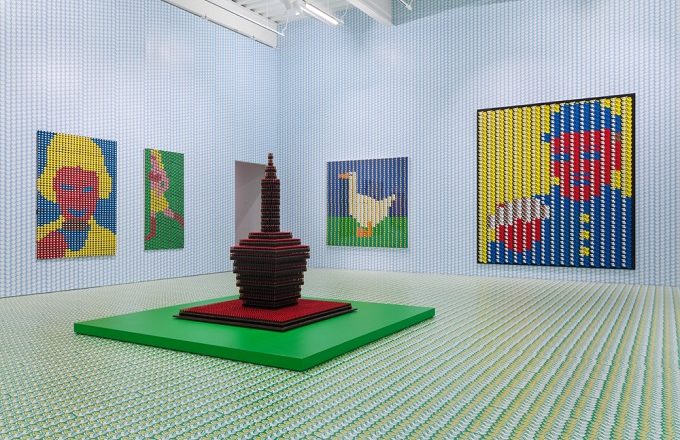 “It was absurd and somehow funny but also terrifying and sublime in its vastness.” 1

Thomas Bayrle’s description of his visit to a Ferrero chocolate factory captures something of the experience of viewing his work. Like a machine churning out millions of identical candies, Bayrle, in his paintings, prints, sculptures, and films, has since the 1960s produced series upon series of endlessly repeating forms – commercial logos, everyday products, masses of people, all accumulated to the point of dizzying, hypnotic excess. Bayrle’s panoramas of sparkling commodities and throngs of anonymous figures incite in the viewer that sublime mixture of wonder and desire, fear and despair. And the artist courts that conflicting response. Working in the midst of West Germany’s postwar “economic miracle,” as consumerist excess replaced wartime deprivation, and against the backdrop of the Cold War, as East and West waged an ideological battle of collectivity versus individuality, Bayrle saw himself as a participant-observer who, rather than taking a side, “inhabit[ed] the contradictions.”2 Those contradictions are continually manifest in Bayrle’s work, underwriting the thematically arranged galleries of the artist’s first major solo exhibition in New York. Deftly curated by Massimiliano Gioni, Gary Carrion-Murayari, and Helga Christoffersen, and accompanied by an important scholarly catalogue, Thomas Bayrle: Playtime occupies the museum’s third and fourth floors and features 115 paintings, prints, sculptures, films, and objects dating from the early 1960s to the present day.

Often considered a central figure in the emergence of a German variant of Pop, Bayrle (b. 1937 in Berlin; working since the 1960s in Frankfurt) is best known for his signature “superforms,” wherein hundreds of exemplars of the same repeated image coalesce to produce a larger likeness – sometimes of that same image, and sometimes of an entirely different one. Throughout the exhibition, we see this technique used to varying results, with the relationships between constituent unit and superform shifting to create different optical effects that challenge the relationship between abstraction and figuration. At what point, Bayrle seems to ask, does the individual get lost to the mass? And relatedly, at what point do we focus so much on the individual parts that we lose sight of the bigger picture? These questions clearly probe not only the formal problems of painting and sculpture, but the social and political disputes of the Cold War era, as well.

Entering the exhibition on the third floor, one is immediately enveloped in an immersive environment of repeating patterns. The walls of the first gallery are covered in La vache qui rit [The Laughing Cow] (1967/1997), a light blue wallpaper emblazoned with the chipper face of the Laughing Cow, mascot of the eponymous cheese brand, all in white. The floor is lined wall-to-wall by Schuhe [Shoes] (1967), a pattern of cartoon footwear in bold green, yellow, and white. Hanging on the walls are ten examples of Bayrle’s superforms, all simple portraits of people and products made up of smaller versions of the same, adding more layers of entrancing pattern to the kaleidoscopic display. Both the seriality and the subject matter in this room connect Bayrle to the international Pop context, calling to mind especially Andy Warhol’s replicative silkscreens and French artist Bernard Rancillac’s appropriation of commercial logos. The absurdity and humor Bayrle found in the Ferrero factory are fully manifest in this playful, colorful, graphic environment, which both participates in and critiques mass production.

This first gallery functions as a kind of laboratory for the superform idea: we see how Bayrle experimented with it in oil paintings, then silkscreen prints, then sculpture in the round. In each iteration, the artist adjusts his technique to different ends: the paintings are insistently hand-painted. The individual units that make up the superform are repetitive but not identical. They are arranged in a mass rather than a precise grid, their positions adjusted to carve out the contours of the superform. In the silkscreens, the units are regularized; the whole support flattens out and takes on a more decorative edge as the entire surface becomes one repeating pattern, with only variations in color to suggest the superform. A sculpture at the center of the room – a giant bottle of Maggi seasoning made of miniature Maggi bottles – brings the practice into three dimensions, and underscores the conceptual negotiations underlying all of the superforms. The small bottles are stacked atop each other to form the master container; but they are also gathered along the base, in a square surrounding the superform. In this configuration, they come to appear as people congregating around a monument, an impression further encouraged by the title of the work, Roter Platz [Red Square] (1982/1996). Here Bayrle spells out one of the concerns that is at the heart of his project: bringing to light the visual similarity of capitalist production and communist pageantry. The serial repetition of identical products and their advertising images in the West, Bayrle shows us, look a lot like the choreographed sameness of mass demonstrations and their government-sponsored propaganda depictions in the East. Bayrle, who lived in the heavily American-influenced Frankfurt but read Mao’s writings and perused Chinese propaganda books, saw the daily spectacles of capitalism and communism as visually indistinguishable.3 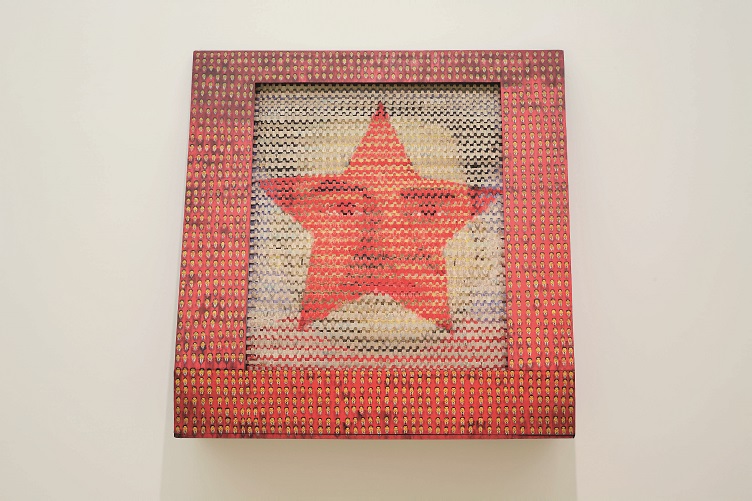 In the next room, we find Bayrle inhabiting such contradictions in equally emphatic ways. This gallery features the artist’s earliest works, the “painted machines,” alongside some of his later silkscreens, with his films playing on a loop in a back alcove. The painted machines are rudimentary constructions made of wood, with engines that shift individual parts in lurching motions that recall Jean Tinguely’s kinetic sculptures of the same period. Some of the contraptions perform synchronized movements, as in Super Colgate (1965), wherein an army of tooth-brushers, lined up in rows, enthusiastically brush their teeth, their arms jerking back and forth in unison. The coordination of the identical motions, coupled with the anonymity of the simplified figures, give the impression of a choreographed exercise. Here Bayrle observes the ways in which capitalism – in the figure of an American product that was suddenly flooding the markets and homes of West Germany – produces a kind of sameness that looks remarkably like communist homogeneity. (That Bayrle was working in the wake of Nazi terror, during a period of seeming historical amnesia regarding that shared yet widely disavowed past, adds another layer of complexity to these works.) In other painted machines, the masses of like forms combine to create one superform, then shift to reveal another one. In Mao (1966), for instance, anonymous men in suits alternate between forming a portrait of the communist leader, and a large red star. What is perhaps most striking in the painted machines of this sort, where one image morphs into another, is the furtiveness of the conversion. Though the machines are slow-moving, the eye struggles to see the change unfolding, the image shifting, until suddenly it is complete. The kind of attention required to catch the transformation is essential to the experience of all of Bayrle’s work: throughout the exhibition, we focus and refocus our eyes in order to perceive the forms and the superforms, and to grasp the relationship between the two.

Directly across from the creaking, sputtering, hand-painted machines are two walls of slick, silkscreened superforms; these are smaller in scale than those in the first room, and each is from a numbered edition of 15 to 250. The subject matter varies, but most make reference to the emblems of the postwar economic boom: automobiles, factory workers, stock market reports. These prints are keen examples of an oft-praised quality of Bayrle’s work: his use of analog means to anticipate digital technologies that were not yet available.4 The manipulations in works like American Dream (1970), where the units have been distorted to create a three-dimensional effect, can feel quite familiar to a digital native’s eyes, but were in fact produced by painstaking manual labor. 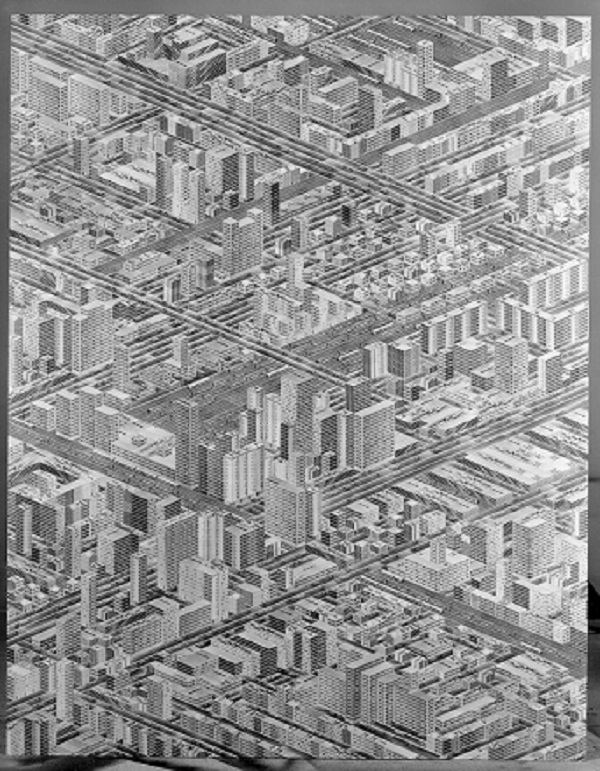 Passing back through the technicolor exuberance of the first gallery, one arrives at a more subdued space. White walls are hung with large canvases featuring more superforms – now subtler, with the vague contours of the larger figures barely emerging from the seas of repeated imagery. Across the room, photo-collaged cityscapes in austere monochrome offer a kind of urban, industrial sublime. Geometric patterns of buildings and roads stretch from edge to edge of each canvas, often on a diagonal, conveying a sense that the networks of highways and parking lots continue far beyond the borders of the support. Embedded in these seemingly infinite cityscapes are religious references both understated and overt. The Autobahn, viewed aerially, takes the form of a Gothic cathedral. A massive crucified Christ floats over a crowded highway, his own body made up of tiny images of that same highway. Characterless concrete structures, surrounded by faceless throngs of people, appear as pilgrimage sites. Without condemning or celebrating urban development, Bayrle calls attention to the ways in which our daily capitalist routines – commuting to work, toiling in bland office buildings, visiting nondescript shopping centers – mirror religious rituals: the rote repetition; the comfort of consistency; the predictability of infinite continuation.

At the center of this room lies a vitrine of objects and ephemera, which highlight another aspect of Bayrle’s contradictory praxis. Working at a time and in a place where it was expected for artists to take sides – either to embrace and participate in consumerism’s spread, or to be engaged against it – Bayrle alternated between opposed positions. In the 1960s and 70s he worked by day as a graphic designer, producing large-scale advertisements for major corporations; by night he made radical posters for the leftist student movement. In this vitrine, these two facets of his working practice intermingle, showing how the same visual language could be used to antithetical ends. Book covers he designed are presented alongside political posters alongside materials used in the making of his studio artworks and films. One of those films is projected onto a small floating screen at the center of the room, the projector humming its monotone whir, creating an industrial soundtrack that both relates this room to the gallery of sputtering painted machines and connects it—we will soon realize—to the sonorous kinetic sculptures awaiting us upstairs. 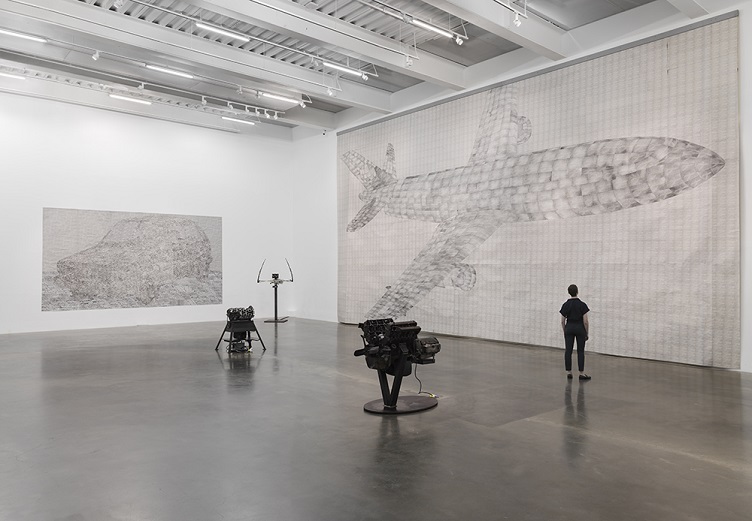 On the fourth floor we find a quartet of mechanical sculptures, including a car engine that runs to the soundtrack of rosary recitations; a series of computer-generated portraits, made when digital technology finally caught up to Bayrle’s manual practice; a tapestry of the Pietà composed of images of iPhones; and three monumental photo-collaged superforms, of an airplane, a car, and a couple, each occupying its own wall. Reaching the concluding images and objects of Playtime, where technology, religion, and humanity intersect, and where the unique components of colossal superforms vacillate between perceptibility and effacement, we confront again the essential contradictions that Bayrle has inhabited for more than five decades. In this universe, religious ritual, political demonstration, and consumerist routine all appear unsettlingly analogous: each subsumes the individual. That omnipresent threat of erasure, materialized from one accumulation to the next, incites the mixture of awe and wonder, fear and despair at the heart of Thomas Bayrle’s sublime.

Jennifer Watson Wester is Assistant Professor of Art History at Notre Dame of Maryland University, where she also serves as Director of Gormley Gallery. Her research focuses on the questions of "the real" and realism in the postwar period. Her most recent publications, both on Arman, can be found in the latest edition of Interfaces and in the forthcoming issue of Art Inquiries.