The Distraction of Symbolism is a 2019 single channel video by Jamaican artist Deborah Anzinger that screened as part of her multidisciplinary exhibition, An Unlikely Birth (Institute for Contemporary Art in Philadelphia, April 26- August 11, 2019).1 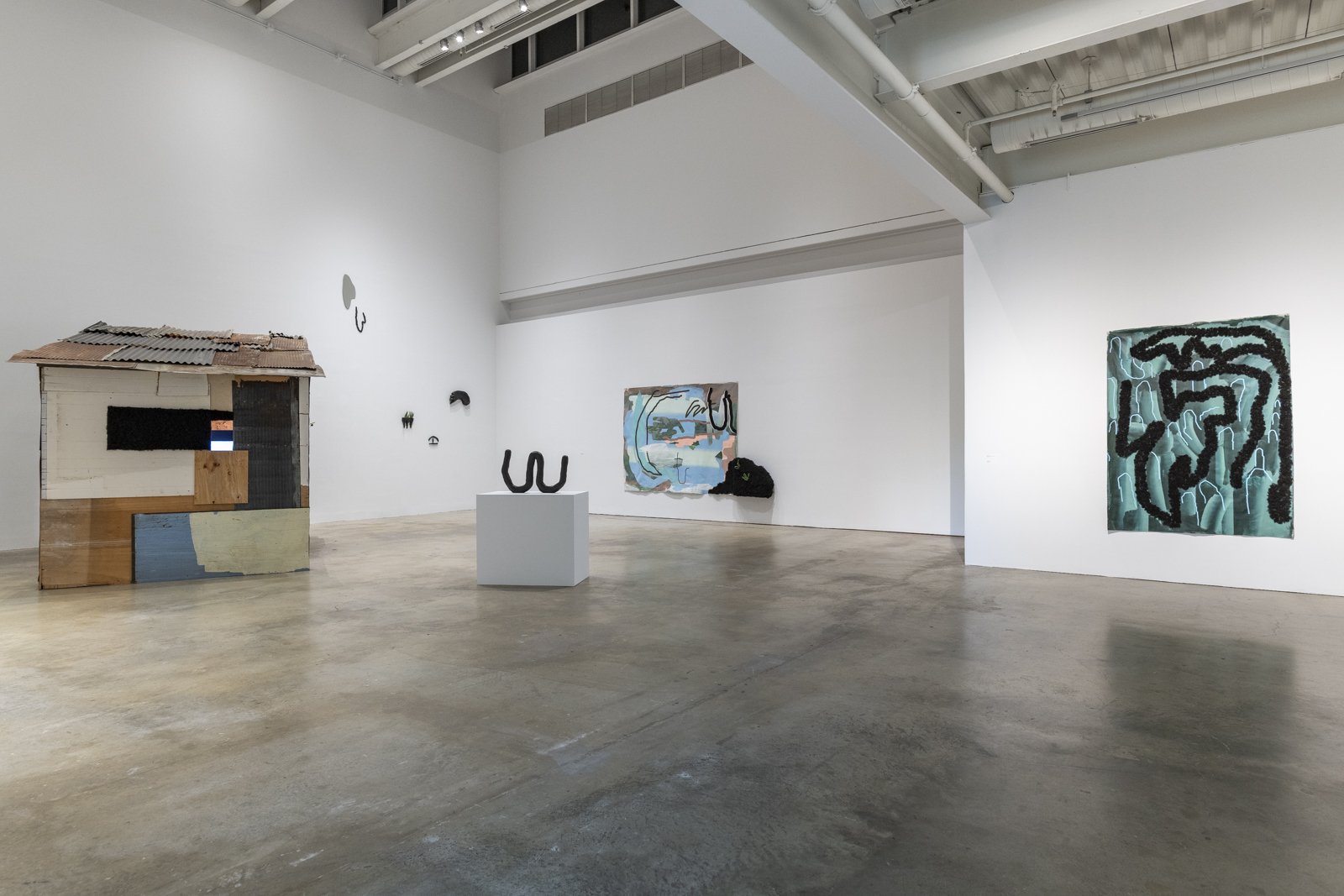 The show stages contrasting ideas of density and scarcity. Paintings, sculpture, and plants are placed at a distance from each other, appearing to float, each as its own sphere. Such spaciousness underscores Anzinger’s evocation of things sunken, things discarded, things marked, things abandoned and drifting on the surface.2 This detailed layering of consumer waste and leftover construction materials, all of dissimilar texture, weight, source, and color, immerses the viewer by metonym in the intricately interwoven, nearly suffocating, pressures of the slave plantation’s long afterlives with its extractive grifts of land development, tourism, home ownership, and so on. 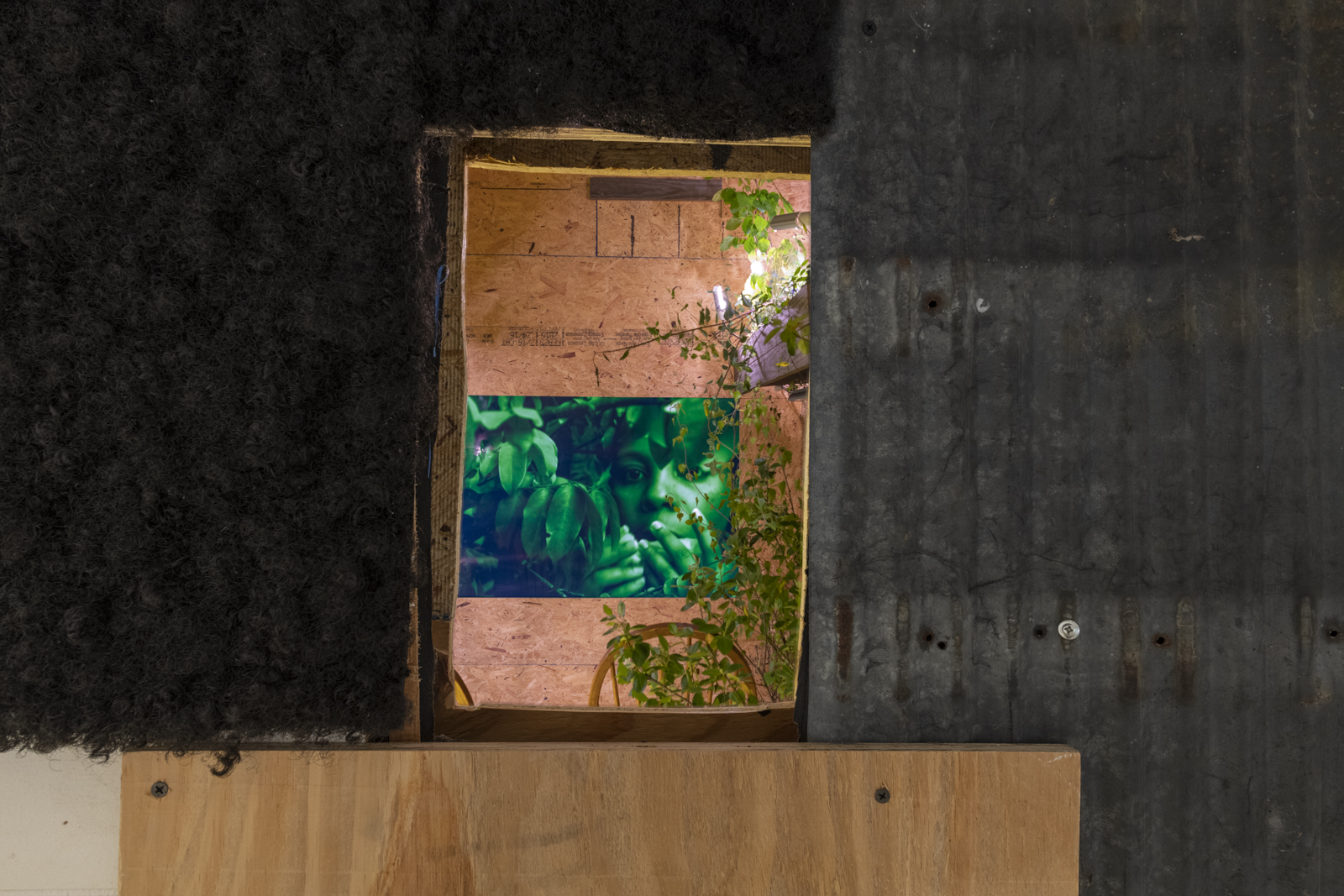 The Distraction of Symbolism is set within a sculpture, a house, framed by the larger exhibition. Evocative of domestic dwellings commonly seen in the rural areas of Jamaica, this abode is constructed of dead things (recycled wood, zinc, and hair). This house suggests precarity but also sanctuary and shelter. The film’s framing is that of a make-do in which things can grow in spite of hard and scrambling living. 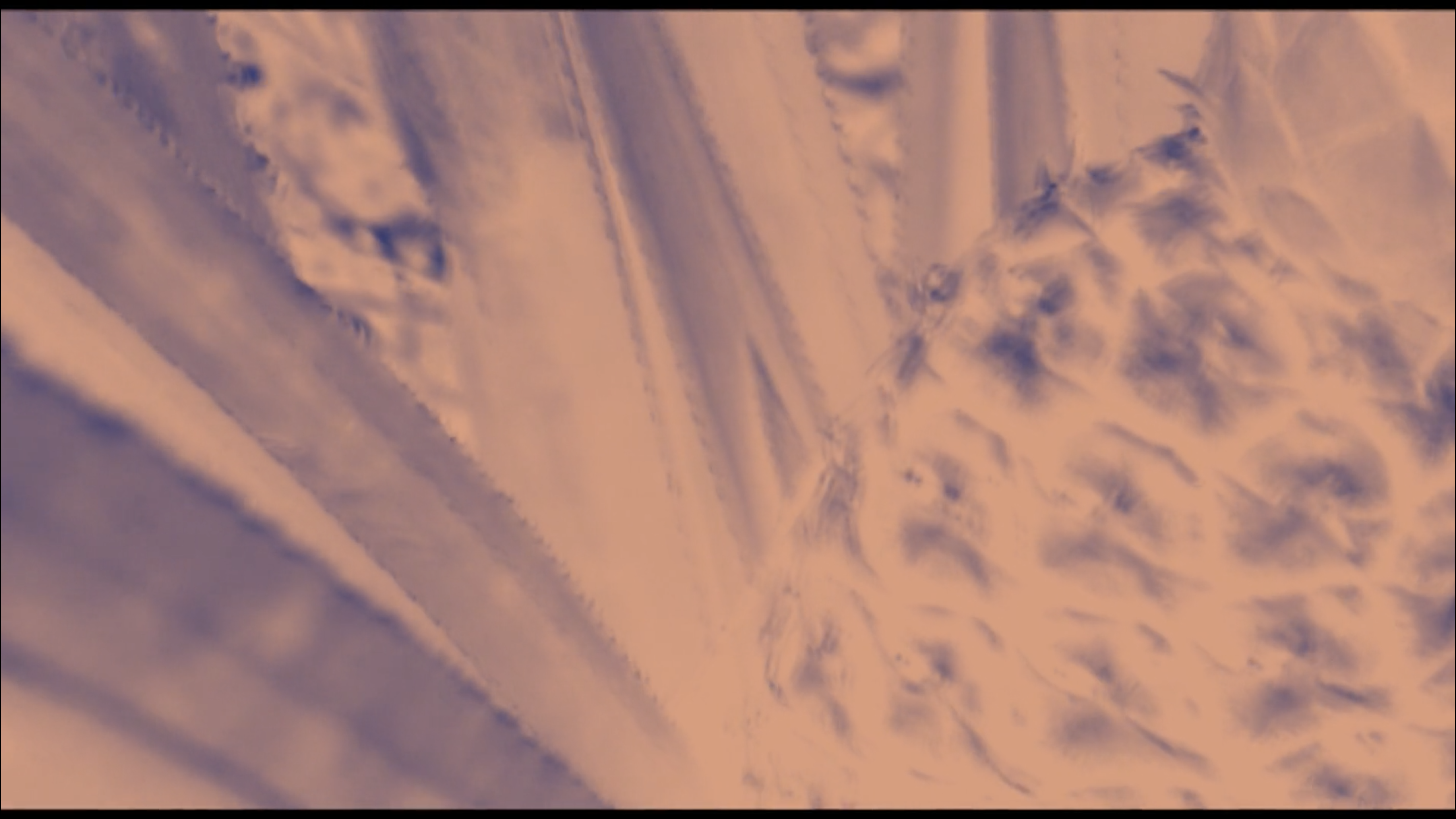 The seven-minute film poetically enfolds large historical and scientific concerns with the sensory immediacy of a woman touching water, a woman eating fruit, a woman facing questions of survival. Anzinger includes a number of sound samples, particularly from Ka’Bu Ma’at Kheru’s Jamaican radio program The Africa Forum. Over defamiliarizing images of the Jamaican landscape, an unidentified man, perhaps a scientist, implores listeners, “The work that needs to be done now is to make people aware of what is happening around them.” Toward this effort, Anzinger creates startling juxtapositions in which sounds and images pull the viewer in opposite directions. In one early sequence the viewer vicariously experiences the familiar sensual pleasures of playing in water while the soundtrack features sampled audio of people discussing drought. Mixed with talk of the paucity of water, there is the sound of the water’s carefree giggles as bathers tickle the surface. Plentitude and shortage, abundance and lack, each inhabit the frame, pushing against the nostalgia and lightheartedness that water so often conjures.

A document of the long Anthropocene, the film’s experimental form says nothing is over as human life is expressed along multiple “timescales,” nonlinearly shaping and being shaped by the rest of natural world. 3 This term Anthropocene blurs the distinctions between natural history and human history; they dissolve.4 This is the work of the film’s title: to pull us away from distracting symbols that romanticize nature. Anzinger’s image of a crumbling street offers a prime example when she shows a pothole and then lowers the camera to show what lies beneath the surface as if sinking into our own inquietude. The camera movement registers deep depressions in unevenly paved roadways of denial and distraction from impending reality. Ironically the pothole arises from excess water where the drought denotes its long absence. The film’s rich opening sequence includes a coppery negative still life of a pineapple (Ananas comosus), a traditional symbol of colonialist hospitality and an icon of luxury, that here is turned just so to emphasize its long serrated knife-like yet fleshy basal leaves and rough skin full of eyes. It is an invitation to idealized tropicality offered then refused and critiqued; a startling of the viewer to awaken to the danger we all now face in the Anthropocene.

The distorted remix from the radio hovers in the background until it suddenly comes in clear as if catching the film’s signal from a passing tower. A Jeremiad, it fervently demands that we decolonize how we think about nature. The film posits rebellion against our industrialized Western habitudes of progress, leisure, work, and wealth, but tenderly. In one of the film’s voiceover sequences, a woman frames these macro concerns as matters of day-to-day practicalities of personal care. Over a dyptich of images with a human form on one side and a hillside on the other, she asks a series of questions: What will it be like to be old? How will I live? How will I care for myself? We see the fraught line between the industrial and the primordial collapse when the filmmaker appears as a fugitive among the leaves eating fruit. But given the discussion taking place in the film’s audio, is it safe to eat?

Elsewhere, Anzinger has spoken of the “colonial syntax,” those inherited arrangements that shaped and remain embedded in our relationships to each other and to the natural world.5 Anzinger’s experimental approach visually disturbs this syntax where brown skin, blue water, and rurality means a promising holiday in a primitive wilderness far from the threats of civilization. Of course, it is exactly in the Global South, where people go to escape their lives, that we see some of the most complex and disastrous effects brought about by capitalist claims to bring progress.6

Distraction of Symbolism invites us to trust in our ability to recover from our own wreckage. Anzinger offers optimism through her use of the color green in the video as renewal. Also, by placing herself in the piece she voids the lines between work and self, asserting her agency.7

But, when the window to the film is closed what is left is you. All of this becomes mixed with the chants of protestors outside my window, my portal. I am wrecked, left to navigate multiple temporalities. I feel at once all the burning forests, all the floods, the too-hot, the too-cold, all our planetary ruin, the sunken ideals and illusions. I see in myself Anzinger’s Bibilical Eve, in her vulnerability, and in her daring hunger for more.

Terri Francis is Associate Professor of Cinema and Media Studies and Director of the Black Film Center/Archive at Indiana University. Terri is a scholar of Black film and her work involves archival research, cultural history, and visual analysis, which she frames within vicissitudes of racial formation, and representation. Her writing appears in Film History, Black Camera, Transition and Another Gaze. She is the author of Josephine Baker’s Cinematic Prism forthcoming from Indiana University Press in February 2021.