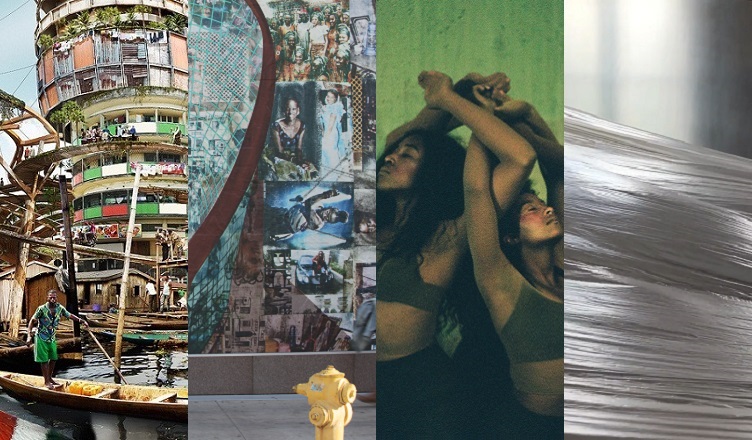 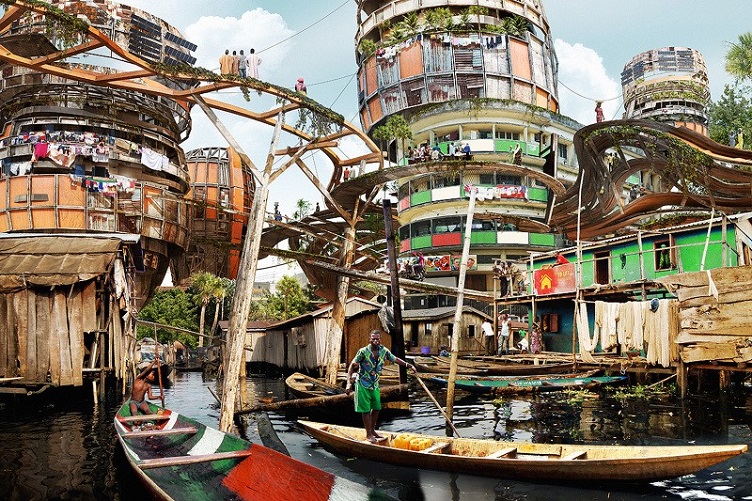 For nearly two decades, contemporary architects in North America and western Europe have begun to rediscover Africa as a significant place of formal and economic development. Despite being deemed the “Dark Continent” by prominent thinkers from the Enlightenment to postwar debates, Africa has not really been missing from global affairs. Yet it took nearly a century before the solipsistic preoccupations of western architectural theorists finally turned their collective gaze away from themselves back toward the rest of the world. In this interim, the rest of the world continued to change, and in some spaces, such as Lagos, Nigeria, the pace of change has far outstripped that found anywhere else.

Olalekan Jeyifous is a Nigerian-born artist and architect operating in Brooklyn, New York. He emigrated from Africa to the United States to study architecture at Cornell University before turning his hand toward architectural renderings. Jeyifous’s work has been exhibited internationally at the Museum of the African Diaspora, the Shenzhen Biennale of Urbanism and Architecture, the Architekturmuseum der TU München, and the Albuquerque Museum; on media outlets such as CNN, The Huntington Post, The Atlantic magazine’s Citilab, and Dezeen; and is available online in the form of YouTube videos. His work injects an Afrofuturist sensibility into the Euro-American tradition of architectural utopianism. Alondra Nelson has framed Afrofuturism as a genre of science fiction literature and culture that explores culturally distinct approaches to technology. Instead of viewing racial identities as a liability that must be homogenized by science or technology—the default position of mainstream writers in the 1990s—Nelson challenges black authors to create utopian stories that directly “reflect African diasporic experience” in technological culture. With Sun Ra’s envisioning of Space is the Place (John Coney, 1974) and Ishmael Reed’s Mumbo Jumbo (1972) in mind, strains of the Afrofuturist tradition can be traced throughout the twentieth and twenty-first century.1 The visual themes of Jeyifous’s “Improvised Shanty-Megastructures” series (2015)  applies Nelson’s challenge to design by synthesizing the mega-structural scale and technological themes of postwar architectural utopianism with the black participant observer’s nuanced appreciation of the everyday. His project introduces a non-Enlightenment vision of blackness that is in and of the contemporary African city. This notion of blackness transcends the negativity of previous Enlightenment categories to present a new vision that attends to the realities present in Lagos. 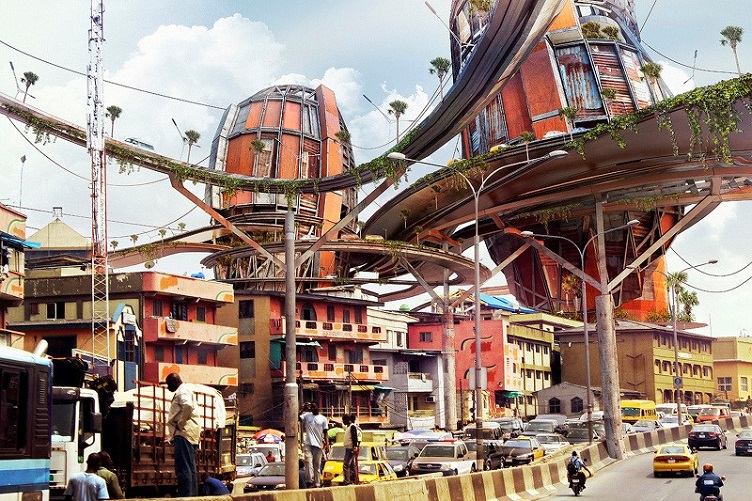 In order to create his visual assemblages, Jeyifous overlays contemporary images of Lagos with various technological infrastructures, employing collage techniques in his still images and montage in his videos. This process produces a new spatial imaginary that combines the pre-modern technologies of fishing rafts and wooden lean-to shanties with modern highway overpasses and skyscrapers. Found materials are combined with solar panels, concrete pylons and suspended cable cars above the street. Light and agile oblong steel framed bulbs of housing and civic spaces hover above the modest earth-bound concrete apartment blocks that are so indicative of postwar modernization campaigns in colonial cities. By adding new layers of technology to the existing city, his videos simulate the incremental growth of a shantytown-megastructure. Each video scene slowly harmonizes the simultaneous melodies of the district: after a while, one can imagine the smell of the tomato base for an Ogbono soup or the crackling of fried plantains in-between the croaks of nearby frogs and the conversations of passersby.

In light of the antagonistic relationship that currently exists between residents of shantytowns and proponents of boosterism in Lagos, Jeyifous’s work emulates the technological optimism of postwar architectural utopias but does so while more seriously investing in the improvisational genius of its residents. This genius manifests through a local building culture that transforms found materials into physical settings that mirror the cultural specificity of its people. In this essay’s opening image, the blue, red, and green colors of the scene unify parts of the local landscape by finding their way into the painted ornament of local tools, the spandrel panels of nearby towers and the mass-produced shirt of a water taxi driver.2 Yet the resulting aesthetic does not shy away from the informal character of the shantytown. Instead, it normalizes it by weaving it more firmly into the fabric of the city. Real living conditions in Lagos are a stark contrast. For example, without a permanent solution for integrating the city’s riverfront shantytowns into its urban grid, waste water and potable water mix with one another, exacerbating the spread of disease that further stigmatizes an already marginalized population.3

Thus, in its Afrofuturist sensibilities Jeyifous’s work redefines blackness as a projective force for contemporary design, contra Enlightenment philosophy that proposed blackness as an abject category of aesthetics and considered Africans to be subjects without a history.4 His visual assemblages critique western narratives and operations of history that limit African development to imitation or external control. He does this by creating a civic space above the earth-bound concrete blocks that were so indicative of postwar building campaigns in colonial cities. In this future, Lagos will be defined by the upward mobility of its urban poor who do not need to labor under academic debates on the visual legacy of colonial modern architectures. These urban poor use the material fragments of global capitalism in improvisational ways that constitute a compelling visual representation of their local character.5 The profound success of Jeyifous’s work lies in his ability to prick the fragile conscience of an increasingly global white elite without foregoing a robust depiction of the joyous complexities of lived black spaces. It is in this precarious balance that Jeyifous’s work models a reformation of blackness in contemporary architecture culture.

Charles is co-editor of the cultural reader Diversity and Design: Understanding Hidden Consequences (Routledge, 2015) and the forthcoming Race and Modern Architecture (University of Pittsburgh). His current book manuscript, Building Character: The Racial Politics of Modern Architectural Style is forthcoming in the Culture, Politics and the Built Environment series of the University of Pittsburgh Press.