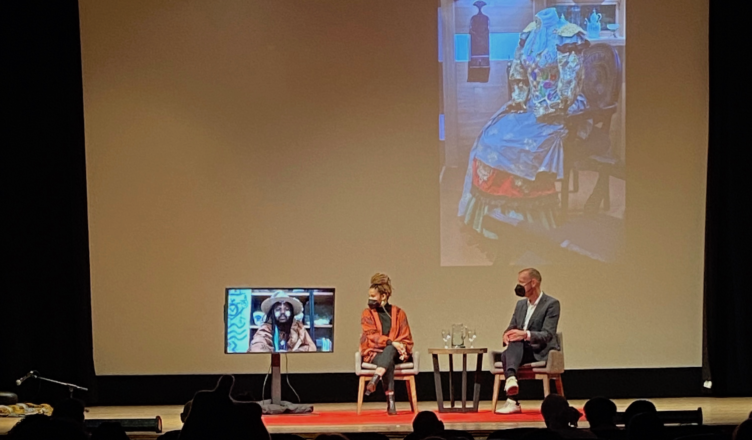 “In the Parlor” program held on March 13, 2022, at the Metropolitan Museum of Art. Photo copyright Ifeanyi Awachie.

Exhibition under review
Before Yesterday We Could Fly: An Afrofuturist Period Room
Metropolitan Museum of Art
November 5th, 2021—ongoing

Visiting Before Yesterday We Could Fly: An Afrofuturist Period Room (November 5, 2021–ongoing) at the Metropolitan Museum of Art requires a fierce negotiation of space. On my first visit to the exhibition, curated by Hannah Beachler, Michelle Commander, Sarah E. Lawrence, and Ian Alteveer, I hold my ground in the corridor, about two bodies wide, between the walls of the Period Room and the living room and kitchen that comprise its interior. These rooms are modeled after the imagined interiors of a 19th-century home in Seneca Village, the historic Black community displaced by the City of New York in 1857 to make room for Central Park. Similar to the Met’s other period rooms, which the museum defines as “a fabrication of a domestic space that assembles furnishings and objects to create a fiction of authenticity,” the Afrofuturist Period Room takes inspiration from the history of Seneca Village, positing one possible alternative future wherein its residents were allowed to remain, evolve, and prosper.

On my second visit to the Period Room, traffic swells and thins and swells again around me, Sunday families stream in and out of the room’s tight confines, and I admit defeat, opting not to linger here, but instead to take quick reference photos and later consult the online exhibition guide. Despite my decision, the Period Room sparks inspiration, and I begin freewriting in my Notes app.

I write about the feeling of being met with the rich display before me. The kitchen suggests that its imagined residents would have hung herbs, displayed art, eaten at round tables from ornately designed ceramic flatware, and left their shoes by the dining table, perhaps before retiring to a bedroom, a private space beyond the conceptual walls of the exhibition. Here hang plants; there rest bottled tinctures, pestles and mortar, a large tea kettle, a radio, a frying pan, a crucifix, a hot comb, a mop and bucket, a dustpan, various pots. Beyoncé smiles from one of the plates, and a belt boasts a kente pattern; the hands of contemporary Black, diasporic artists mark many of the pieces. There are also objects from the Museum’s European collections—the wall text explains that a glass-blown, 18th century “bowl, cruet, reliquary glass, [and] jar with cover” are Italian, made from raw materials from North Africa. The glass beads, made in Venice, would have been traded for enslaved people in the 15th century. For the curators, the imagined inhabitants transform this “exploitative relationship […] by repurposing these innovative objects for their own use.” But is “their own use” enough? Can this imagined use bear the full weight of the racist, colonialist exchanges of human beings for pretty bits of glass? Does this use produce a different relation?

The living room, too, contains a significant inventory: chairs, side table, glass-blown chandelier (Vernus 3, 2020, by Ini Archibong), display cabinet, sculptures. A retro, cube-shaped TV sits on the floor, below the eye level of the viewers implied by the surrounding seats, playing OUT / SIDE OF TIME (2021), a commissioned film by British Nigerian artist and director Jenn Nkiru. Shot and/or edited entirely in black and white, the film mimics, in Nkiru’s signature style, a viewer’s clicking between channels. As she says of her 2019 film Black to Techno, “Imagine if you had 17 public access TV stations […] and this person is just switching through these different things.” Nkiru’s practice lends itself perfectly to this speculative, domestic screen. The TV “broadcasts” a performance by the legendary poetry and music collective The Last Poets, then there is the sizzle of static before the performance is replaced by a family scene. A well-dressed, Black mother, father, and children sit around a table. Dark hands clasped on creamy white tablecloths offer a moment of tenderness. More static, then a close-up shot of a woman (played by Adepero Oduye) talking on the phone, her mouth and round jaw taking up the entire frame as she whispers intimately. Then dancing couples, more lush, domestic interiors, and alleyways that bring to mind Saidiya Hartman’s descriptions of New York City tenements at the turn of the century.1

Surrounding the exhibition like a cocoon is Thriving and Potential, Displaced (Again and Again and…) (2021) by Nigerian-American artist Njideka Akunyili Crosby. The collage covers the walls with “images of the 1856 hand-drawn survey map of Seneca Village and nineteenth-century ambrotype portraits of Black New Yorkers, which are then juxtaposed with more contemporary images from the African diaspora.” The wallpaper visually connects its imagined residents with their fellow Black diasporans across time and space. The Met has said that it aims to “reimagine the immersive experience of the period room by embracing the African diasporic belief that the past, present, and future are interconnected.” Akunyili Crosby’s painting practice, which makes use of repeated photographic transfers, is well suited to this Afrofuturist purpose. That the established artist occupies the background of the exhibition allows the glass-blown spotlight to shine on other contemporary practices, such as Nkiru’s.

And yet I remain curious whether the museum itself is truly shining a spotlight on the artists exhibiting in the Period Room. The curators describe the Room’s position as “a vital intersection at the heart of the Museum.” But the Room’s quarters are cramped, placing the visitor in such close proximity to the objects that one worries about knocking askew Henry Taylor’s 2017 painting of Andrea Motley Crabtree, the first Army woman to graduate from the Second Class Diver Course. While the artists featured in the Period Room beautifully and robustly imagine a future for its conceptual inhabitants, the exhibition may unwittingly reinforce just how little room there is at the Met for these artistic practices.

Leaving the Period Room, I walk into the sunny American Courtyard and realize that it is still daylight outside—it’s as if I’ve emerged from some dark night. I’m reminded of Nana Adusei-Poku’s thinking about the abyss, which reframes the notions of darkness and Blackness in relation to the white cube: “This black abyss […] is rich with knowledge and potential. It is incomparable, perhaps wholly unrelated, to the nothingness that often fills empty museums.” Though the airy Met galleries dedicated to the art history canon may seem to surpass the Period Room in terms of square feet, the depths of “knowledge and potential” contained in the Afrofuturist exhibition are expansive. If the size and location of the Room are limited, perhaps the expansiveness of this knowledge and potential might find room to breathe in the live program as a curatorial mode. Live programming might facilitate the exhibition’s project of expanding the life of Seneca Village beyond its punctuated history.

“In the Parlor”—a program held on March 13, 2022, as part of “A Daylong Celebration” of the exhibition—featured a sound bath by artist, performer, and healer Rena Anakwe and a conversation between exhibiting artists Andile Dyalvane and Fabiola Jean-Louis and curator Ian Alteveer. In this conversation, audiences could hear firsthand from the two Black and African diasporic artists. The discussion augmented the experience of witnessing their artistic visions in the Period Room. Jean-Louis spoke about how her practice harnesses, among other elements, the transformability and accessibility of paper and the symbolism of Haitian spirituality to celebrate Black creativity and resilience. Joining the conversation from South Africa via Zoom, Dyalvane described himself as a medium through whom ancestral creative visions were channeled to create his glazed ceramics, Sandi Conical Vase (2020) and Umwonyo (2019).

The richness of the “Parlor” conversation raises the question: what if a sprawling, extended live program, offering multiple opportunities for firsthand engagement with the artists, could take place? How might such a live event extend the Period Room beyond its four walls and into the rest of the Museum? What if we could reimagine the entirety of the Met as Seneca Village, even if only for a brief period? Given the breadth of land lost, the wealth of knowledge displaced, and the numerous lives impacted by the razing of Seneca Village, such a use of liveness might go further than the Period Room to offer a reparative, Afrofuturist reimagining of the disappeared community that the Met seeks to celebrate.

Ifeanyi Awachie is a Nigeria-born, Atlanta-raised writer and curator based in New York. With a B.A. in English and creative writing from Yale University, she is the author of Summer in Igboland. She is the writer and director of This Thing Is Not for You (2022), produced by WATZS Productions, LLC. Her work has been featured in Feminist Review and Arcadia Missa. Ifeanyi is Founder, Director, and Chief Curator of AFRICA SALON UK, a global contemporary African arts festival. She is also a creative director of FUNCTION UK. Ifeanyi holds an M.A. in Global Creative and Cultural Industries from SOAS University of London and is currently a Ph.D. Candidate in Cinema Studies and a Corrigan Fellow at New York University’s Tisch School of the Arts.