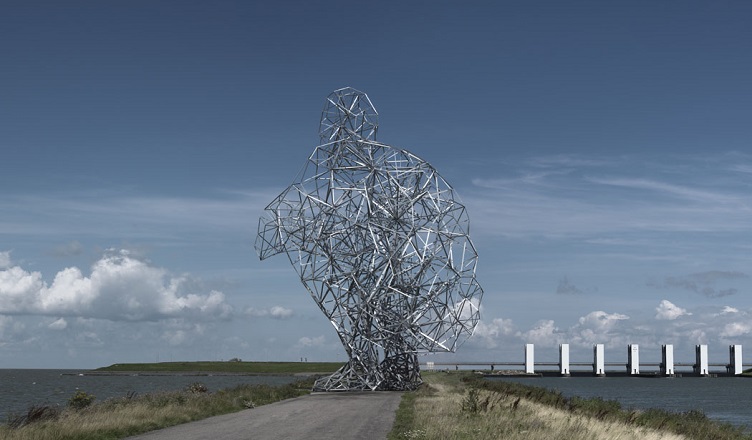 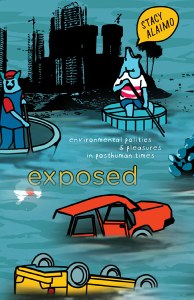 In Stacy Alaimo’s Exposed: Environmental Politics and Pleasures in Posthuman Times, exposure describes a collective material situatedness within bio- and geopolitical milieus. It is meant to critically expose, so to speak, our intimacy with both human and nonhuman others, which is often obscured by recourse to humanism and its autonomous and bounded subject. By examining various sites of exposure that destabilize the demarcations between subjects and their environments, Alaimo demonstrates the exposed subject’s material susceptibility and vulnerability, rendering the boundaries of embodiment contingent and porous. Subjectivity is entangled with(in) its environment, “always already penetrated by substances and forces that can never be properly accounted for—ethics and politics must proceed from there” (5). Alaimo’s intervention in new materialism and material feminism thus reorients attention to the seemingly mundane political and aesthetic practices of co-inhabitation that shape humans and their environments.

Much like Donna Haraway’s tactic of responding to contemporary ecological crisis by “staying with the trouble” (1), Alaimo characterizes “exposure” as a mode of “dwelling in the dissolve” (2). This dwelling necessarily reconfigures subjectivity’s relationship to its environment and signals Alaimo’s particular interest in situated knowledge. Throughout, she develops a trans-corporeal subject that “is ‘situated’ in a more material manner, as the very substances of the world cross through her, provoking an onto-epistemology that reckons, in its most quintessential moments, with self as the very stuff of the emergent material world” (8). The dissolve might be something we dwell in, but it’s also that which seeps into our very pores and reshapes us from within as well as from outside. Trans-corporeality necessitates attending to the specificity of material situatedness, understanding exposure as “differential, uneven, or incommensurate” rather than universalizing (5). In contradistinction to the hermetically sealed liberal human subject—the discrete and autonomous (hu)man body—Alaimo’s trans-corporeal subject becomes a figure for recognizing the dynamic relationality constituting both embodiment and the environment it co-inhabits.

While other new materialist writers emphasize how subject(ivitie)s are a priori shot through by nonhuman substances and forces—biopolitical modulations, GMOs, CO2, and the everyday chemicals imperceptibly invading human and nonhuman bodies alike—Alaimo utilizes these accounts to elucidate an “ethics of exposure” (77). This ethics foregrounds material susceptibility—the way human and nonhuman bodies mutually affect and are affected by their environments—bringing attention to the variety of lived experiences within the Anthropocene. Alaimo’s attentiveness to material susceptibility derives from and adapts strategies developed in art and activism. She addresses, for instance, Spencer Tunick and Greenpeace’s installation-protest in which hundreds of naked bodies litter a glacier in an effort to demonstrate the mutual exposure co-constituting humanity and environment. Alaimo notes: “Vulnerability is paradoxical in the Anthropocene, as it is these very bodies, soft or not, participating in larger technological and economic systems that weaken the glaciers, and yet the enormity of collective human agency is countered by the sense of powerlessness that looms large here, as it does within nearly any other climate change scene” (80). Here, Alaimo articulates the uneven distribution of power within the Anthropocene—(discrete) human bodies are simultaneously (in)capable of enacting geological change, even as global warming continues to intensify. For Alaimo, the Greenpeace demonstration recognizes the inadequacy of “Anthropocene” as a monolithic signifier and throws into doubt whether the collective Anthropos could ever be put to non-catastrophic environmental use. The paradoxical (im)potentce of “dwelling in the dissolve” nevertheless propels Alaimo’s theorization of an ethics whose nuanced relationality might allow us to conceptualize the Anthropocene differently.

While each chapter examines various theoretical, social, and/or aesthetic phenomena as they relate to intimacy, situatedness, and exposure, Exposed emphasizes the potential for politically minded artistic practices to reconfigure our relation to the environment. Alaimo foregrounds artwork that demonstrates the trans-corporeal nature of subjectivity, particularly artistic and political performances that reimagine our relation to a co-inhabited world. Activism and art become indistinct sites for political resistance and ecological reconfiguration. For example, Kirsten Justesen’s series of “Ice Plinth” performances/sculptures, in which she poses nude, less gloves and boots, on large blocks of ice, stages exposure and the “intimacy between person and place” associated with trans-corporeality (91). Justesen’s work highlights the mutual vulnerability embedded in our relation to the environment: the vulnerability of flesh meets the vulnerability of ice, making explicit our tenuous relation to global warming. Linda Hogan’s poetry appears throughout Exposed in the service of destabilizing domestic structures and habituated notions of kinship. Her work helps reconceptualize home as “a zone of the intermingling of nature and culture,” rather than a wholly anthropocentric space (23). In a slightly more comedic register, Alaimo examines Katrin Peters’s “Plastic Seduction,” in which a couple consumes seafood adorned with plastic detritus, suggesting that “ostensibly discrete entities such as plastic bottle caps are, in a sense, already part of who we are, as human diets ontologically entangle us with the plastic seas” (135). While these pieces solicit response from human viewers, Alaimo’s reading of various multi-species artwork—work by Patricia Johanson, Reiko Goto, and Lynne Hull—entertains the possibility for art to materially reconfigure the environment. Hull’s Raptor Roost sculptures, artificial perches produced with both hawk and human aesthetics in mind, do not merely compel human intervention but actively intervene in the environment (38). Alaimo does not subordinate the art presented here to her theoretical apparatus, but deploys these works as resources for interrogating and reimagining our entangled materiality. Art becomes another site for theorizing trans-corporeality and the mundane modes of abating ecological destruction.

The strength of Exposed lies in Alaimo’s willingness to not only draw connections to other works and thinkers, but to offer a compelling genealogy in which she situates her own work. The sheer volume of texts, theorists, and methodologies traversed throughout Exposed—La Tigresa’s topless poetry, Karen Barad’s theory of intra-activity,1 queer theory of both Jack Halberstam and Eve Kosofsky Sedgwick (among others), the environmental organization Fuck for Forest, Jeffrey Jerome Cohen’s work, queer desire in nonhuman animals—makes it a text worthy of exploration for theorists and scholars new to and familiar with new materialism and posthumanism. Because of Exposed’s dense citationality, there are moments when Alaimo’s voice is lost in the multitude of experts she engages. However, in both form and composition, this seems like a new materialist or trans-corporal approach to writing theory. Inasmuch as our theoretical apparatuses are never our own, culled together from the thinkers we encounter, Exposed might be understood as a trans-corporeal material-discursive subject. Alaimo’s rationality for tracing trans-corporeal ethics across oceanic ecologies and species might stand-in for this methodology: “Ethics begins not with an encounter between self and the other, but with discerning the genealogies, substances, and agencies that diminish the distance between human and sea, as the human becomes more liquid, less solid” (123). Indeed, the reading and writing performed by Exposed foregrounds this mode of discernment, tracing genealogies across genres and forms and demonstrating the entanglement and exposure inherent in theorizing the Anthropocene.

By emphasizing the uneven exposure experienced by contemporary biopolitical subjects in the Anthropocene, sustainability becomes a question of “for whom and at what cost?” In an effort to destabilize the dispositions that allow us to see the environment as another economic resource, much of Alaimo’s conclusion rearticulates Exposed’s effort to transpose subjectivity along trans-corporeal lines. She reminds us, “to analyze, theorize, critique, create, revolt, and transform as someone whose corporeality cannot be distinct from biopolitical systems and biochemical processes is to think the stuff of the world” (185). Whereas new materialism might be open to critique for ignoring the bio- and geopolitical realities of our contemporary moment,2 Alaimo demonstrates materiality’s importance in rethinking the biopolitical. Her trans-corporeal subject necessitates thinking with, within, and alongside a multitude of human and nonhuman forces and subjects precisely because there is no position (as if there ever was) outside from which to watch, analyze, or critique. Our very flesh is caught up in the differential becoming of one another, and a world “shadowed by futures that will surely need repair” (188). While Alaimo leaves open what this reparation might resemble, Exposed productively articulates where we are now and provides vital resources for this uncertain future.

Alex Christie is a doctoral candidate in the English Department at Loyola University Chicago, where he researches posthumanism, critical theory, and contemporary literature and culture. His dissertation, "inadequate futures," examines recent literature and theory that might reorient our conceptions of futurity toward an impersonal posthuman subjectivity.