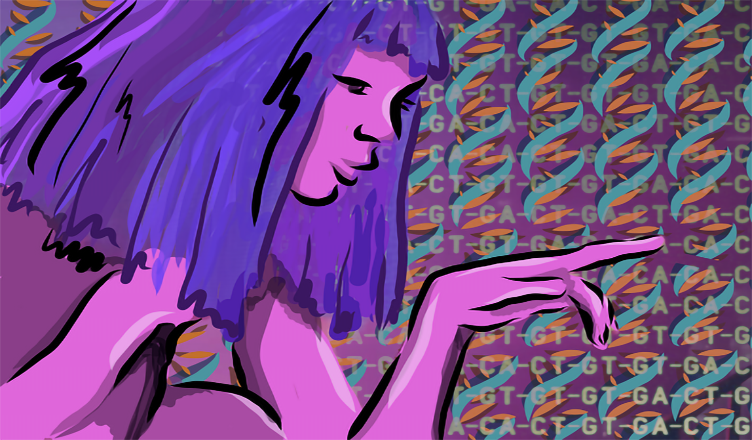 Kendra H. Oliver, “Blade Runner 6.” One in a series of works inspired by a comparison of the 1982 version of Blade Runner to the 2017 sequel, examining how our perceptions of genetic privacy and identity have changed over time.

With the advent of genetic ancestry testing, long-standing anxieties about paternity have been exposed in unprecedented ways. Two comedy-drama television series, Workin’ Moms (2017-2020) and Living with Yourself (2019-2020), feature twenty-first century twists on the problem of uncertain paternity. Workin’ Moms follows an unmarried same-sex couple who meet a man claiming to be the sperm donor for their infant son; Living with Yourself, in contrast, features a heteronormative married couple and a woman’s possible impregnation by her husband’s clone. The differences between these scenarios encompass their civil status and normative sexual frameworks. Yet the two series display remarkable similarities when their central characters face an uncertain future and contested genetics. Both shows emphasize a father’s formal contribution to the genetic makeup of a child—here, expressed through personality and physiology—as dominant over the maternal and familial environment. The notion that the paternal genetic contribution is uppermost evokes discredited concepts of heritability, which date back to Aristotle1 and persisted for centuries in notions of preformationism2 that posit man as form, women as matter.

Unknown paternal genetics create a source of anxiety in Season 4 of Workin’ Moms. Co-parents Frankie and Bianca worry about the disfigured face of their son, Solomon—he is, in their words, shockingly “ugly” (S4, E2). Bianca is Solomon’s birth mother but has no genetic relationship to Solomon. She instead became pregnant with an artificially inseminated egg donated from Frankie’s ex-girlfriend, Juniper. With neither parent having a biological relationship to their child, Bianca expresses interest in meeting the sperm donor, Sean, presumably to see if Solomon’s facial blemish has a genetic basis. Her fears are put to rest upon meeting the donor and discovering information about his personality, family, and profession. Though the identity of the egg donor is known, her genetic contribution to the child is dismissed almost entirely. Instead of asking about the egg donor’s genes, Frankie insults Juniper by asking “You got a messed-up grandpa or something?” to which Juniper replies, “How dare you insult my Pop Pops? You know he fought in a bunch of wars” (S4, E2). Juniper’s genes are acknowledged only insofar as they express the characteristics of her male relatives. Bizarrely, only the sperm donor’s genes seem to matter to the question of Solomon’s unsightly face. Rather than weighing the impact of maternal genes or the environment on Solomon’s features, the show emphasizes Sean’s paternal genetic contribution above other factors—a gesture that revives ancient notions of the preeminence of man’s formal genetic contribution to a child.

The past decade of scientific research, however, has demonstrated that women contribute to heritable characteristics of future generations not only by their own nuclear and mitochondrial genetic makeup but also through the maternal cellular environment and epigenetic changes.3 Many traits, from immune function to prefrontal cortex formation to psychopathology, are linked in part to the health and well-being of the mother.

In Living with Yourself, the culminating moments of the Season 1 involve the uncertain paternity of a newly conceived child. Middle-aged protagonist Miles Elliott has trouble impregnating his wife, Kate. His fertility problem, and overall dissatisfaction with his life, lead him to a spa that advertises a miracle treatment for scrubbing DNA—a process that claims to reverse aging in its customers. In actuality, the spa clones its customers and kills the originals. Miles, however, survives the process, leaving two versions of himself out in society. Both men—Miles and his clone—find themselves competing for Kate’s affections with predictably disastrous results. Unbeknownst to Miles, the clone has an affair with Kate. The anxieties around paternity reach a climax when Kate discovers she is pregnant at the end of Season 1, without knowing whether Miles or his clone is the biological father. Like Workin’ Moms, uncertain paternity generates anxiety in family structures. Will the child have Miles’s depressive personality, or will it inherit the clone’s freshly scrubbed DNA, the source of his genial confidence and physical well-being? Such exclusive attention to paternity in contemporary television reveals continued concern for spermatozoa in a twenty-first century preformationist gesture.

Epigenetics is drawing renewed attention to the maternal influence on the developing fetus, an impact that increasingly is understood to be heritable. Oddly, the myth of women as matter, men as shaping force leaves traces of its legacy in popular culture, lingering on in unspoken assumptions about inheritance of the sort examined here. These are two very different scenarios where current television shows are obsessing over the male genetic contribution to children rather than presenting a nuanced consideration of all the complex factors that influence the development of a child. Such nuance is necessary when considering the diverse structures of modern families. The anxiety surrounding parental genetics in Workin’ Moms and Living With Yourself unknowingly gestures back toward older preformationist myths at the very moment when the impact of the maternal genomics, epigenetics, and the prenatal environment is becoming ever more prominent.

Sarah Hagaman is a Ph.D. candidate in the Department of English at Vanderbilt University and received her M.Sc. in the History of Medicine, Science and Technology from the University of Oxford. She researches intersections of medicine and literature with a focus on autotheory, gender, mental health, and genetic privacy in twentieth and twenty-first century literature.