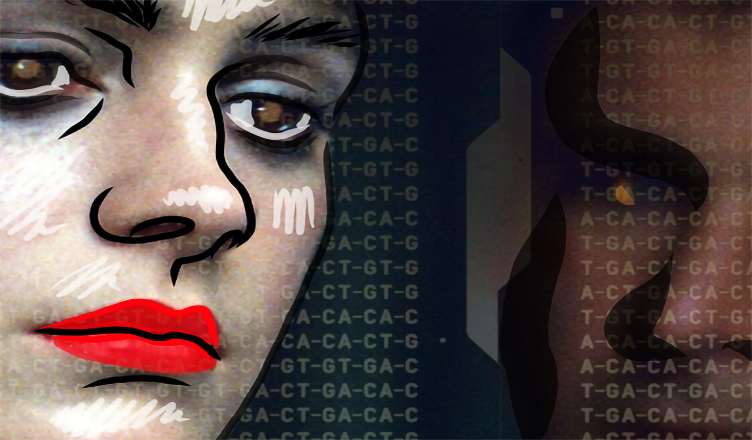 “Blade Runner 2,” Kendra H. Oliver. One in a series of works inspired by a comparison of the 1982 version of Blade Runner to the 2017 sequel, examining how our perceptions of genetic privacy and identity have changed over time.

The articles and original artworks in this cluster all address the topic of genetic privacy in 21st-century literature, film, and TV. Featuring articles by research assistants (RAs) employed on a grant from the NIH, the cluster highlights a new model of transdisciplinary collaboration among humanists, social scientists, and scientists. This model introduces the kind of “vertical integration” common in the lab sciences to literary studies by involving humanities undergraduates, graduate students, and faculty in all aspects of the research process, including collaborative authorship. Finally, the articles analyze the most comprehensive database ever assembled of films and television shows about genetics (800+ unique items, dating from 1912-2020, coded for 109 attributes), a third of which appeared since 2000.

This cluster is meant to demonstrate the value of multidisciplinary, grant-funded research as an alternative for the humanities. As one of the three leaders of an $8-million research project, I have been able to gather and fund a group of nine graduate students from English, German, and Sociology; eight undergraduates from Anthropology, Economics, English, Medicine Health and Society, Philosophy, Psychology, and Sociology; and a Lecturer jointly appointed in Pharmacology and Communication of Science, Engineering, and Technology. Two of the graduate students have received full fellowships from the grant, and the remainder, partial funding. The undergraduates are all paid on an hourly basis. Following the model of research labs in other disciplines, I meet several times a week during the summer with my RAs (less often during the school year) and require attendance at our “journal club” and at university lectures relevant to our project.

It is common in the sciences for exceptional undergraduates to be credited as authors on articles from the lab, but this practice is almost unheard of in literary studies. In large part, this stems from our disciplines’ focus on interpretation of texts, which is difficult (but not impossible) to do collaboratively. In the last decade, the advent of distant reading should make it possible for undergraduates in the humanities to participate meaningfully in collaborative research, but I have not yet seen it myself. Computational modes of analysis, however, are not the only methods in which literary studies can engage undergraduate and graduate students. Any project that works with an archive can benefit from including student RAs, while training them in analytic methods and literary interpretation. That has been our practice. Over the last several years, my RAs and I have published four articles on genetic privacy and have eight more under review at other journals, not including the short articles in this cluster.

A final word on the topic of these articles. Genetic privacy has a bearing on important social and political questions, including bodily autonomy, reproductive rights, queer sexualities, surrogate decision making, kinship and ancestry, parentage, and more. The five articles that follow combine sociological methods with close reading, and they explore how the arts of the present reflect, inform, or mis-inform public understanding of genetics in the age of big data. The art in the cluster is by Kendra Oliver, an RA on the project and Director of ArtLab at Vanderbilt University, an innovative program that fosters creative work by and about scientists. Ethan Gibbons (the lead RA on the project and a PhD student in Sociology) and I have participated in every phase of researching and writing the articles in this cluster.

This is one of seven papers in “Thinking with Student Research Assistants,” the latest installment in the Thinking With series. Read the other papers here:

Jay Clayton is William R. Kenan Professor of English and Director of the Curb Center for Art, Enterprise, and Public Policy at Vanderbilt University. Author of Charles Dickens in Cyberspace: The Afterlife of the Nineteenth Century in Postmodern Culture, The Pleasure of Babel: Contemporary American Literature and Theory, and other books, he is currently engaged in an interdisciplinary project on the impact of literature and film on public attitudes toward genetic privacy.