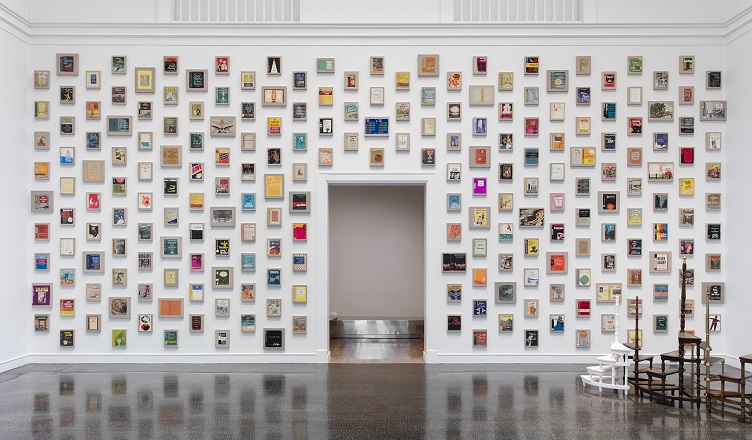 Many international art-goers are familiar with the artist Valeska Soares through her pavilion Folly, first commissioned for the 2005 Venice Biennale, and then soon after reconstructed at the Inhotim Institute in Brumadinho, Minas Gerais, not far from Valeska’s birthplace in Belo Horizonte, Brazil. Visitors to the dimly lit wooden pavilion find themselves surrounded by mirrors, onto which a video loop is projected, creating the effect of a moving image-in-the-round. A woman dances alone, ghost-like, on a stage surrounded by empty seats. Three separate men enter on stage; they glide around and through the woman, never quite her dance partners, never quite in unison with the woman. While the figures have their arms extended as if to embrace their partner, they remain separate from one another, and from us, the viewers. The woman and men sway to a tinny remix of Burt Bacharach and Hal David’s “The Look of Love,” sung by Dusty Springfield and made famous in the 1967 James Bond spy film Casino Royale. The visitor feels like an interloper, intruding into a private, romantic, and nostalgic space. There is a pervasive melancholy invoked by the dated familiarity of the song, the privacy of the dance, the darkness of the space, and the ephemerality and phantasmal nature of the video projection. In this enclosed, sensorial environment, the visitor is simultaneously a voyeur, a witness, and a participant, bodily present yet temporally and physically separated from the dancers. Folly exemplifies Soares’s enduring interests in sensorial experience, memory, loss, love, longing, and the passage of time.

For those who haven’t had the pleasure of experiencing the range of her work, Valeska Soares: Any Moment Now offers the chance to see a mid-career sampling of the Brazilian-born, New York-based artist’s work in two United States venues: the exhibition opened at the Santa Barbara Museum of Art (September 17 – December 31, 2017), and then travels to the Phoenix Art Museum (March 24 – July 15, 2018). The selected artworks subtly explore the same provocative tension and balance between emotional indulgence and formal constraint seen in Folly. Indeed, an exquisitely indulgent constraint is precisely the virtue of the exhibition—both as a quality of Soares’s art and the scale of the show—which is among the smallest of the nearly eighty Pacific Standard Time: LA/LA exhibitions highlighting Latin American and Latinx art in Southern Californian museums between September 2017 and Spring of 2018, and then moving to a variety of venues across the nation and around the world. Though Any Moment Now includes works from a twenty-five-year span of the artist’s career in Brazil and the United States, Soares’s work of the last decade is placed front and center, eschewing comprehensiveness in favor of focusing upon a subset of the artist’s musings and repetitive explorations of texts, archives, and material forms. Reminiscent of Folly, the works in Any Moment Now exemplify Soares’s quiet and intimate negotiations with the ephemeral: nostalgia, memory, language, love, sensory experience, and time itself. In particular, Soares’s installations engage with the materialization, dematerialization, and re-materialization of memory, as manifested in literary and philosophical texts, in domestic and museum spaces, and in the fleeting framework of the imagination. Composing her works from a kind of selective detritus, often of marginal or paradoxical materials—book dust jackets and bindings without texts, dedicatory pages separated from both authors and dedicatees, underlined and expurgated lines of text, sealed scent vessels, marble simulacra of crumpled pillows, an endlessly inventive assortment of footstools and wooden bed frames—Soares’s works conjure profoundly personal psychological experiences or sensorial indulgences, while always holding their referents just beyond reach.

Soares’s artworks demand of their viewers a high level of formal contemplation; many of the pieces in this show are clearly in dialogue with post-1960s minimalist installation and assemblage traditions from across the Americas and Europe, as well as with the phenomenological experimentation of Neo-Concrete artists and poets from Brazil. Formal restraint characterizes much of Soares’s work, as in her monochromatic assemblages of dust jackets and hardcover books mounted on linen. In Darkness and Dawn (from Bindings) (Fig. 2.1 & 2.2) from 2015, for example, tight, geometrical mosaics of book covers, one set black and the other white, reduce the viewer’s experience to color, texture, and fragmentation. Restraint invokes absence, and this is another theme threaded throughout the works on display. In Darkness and Dawn, book covers ripped from their texts leave only titles and authors’ names visible on the book spines, and the viewer is left to puzzle out a rationale for why particular books are placed in proximity. 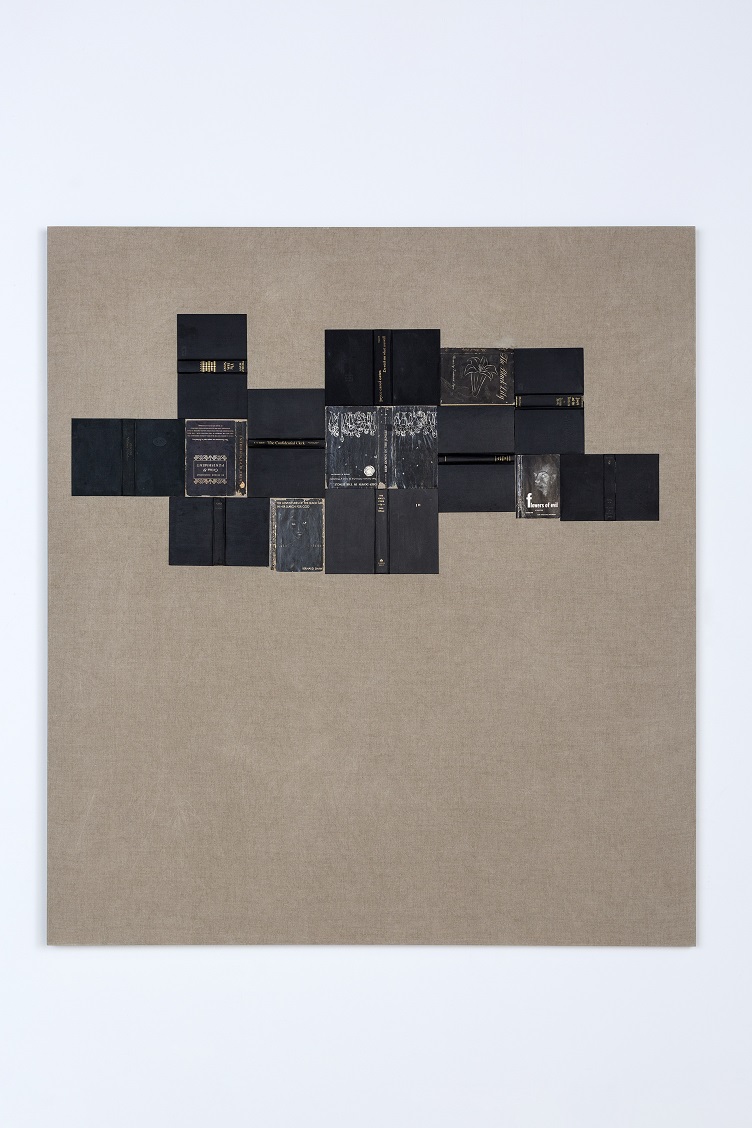 Conversely, Edit (Waiting), Edit (The World Thunderstruck), and Edit (Why?) from 2012, consist of framed pages of text in which some passages are underlined and others methodically blacked out. Neither the minimal object labels nor the pages themselves reveal that the source is Roland Barthes’s 1977 A Lover’s Discourse: Fragments, which is itself a palimpsest of quotations about love and loss from diverse sources. Consisting of black type and geometrical black bars on white paper, these found or, more precisely, doubly-extracted “ready-made” texts from Nietzsche, Heine, Freud, Schönberg and others, echo the formal qualities of the assemblage pieces in the previous room. In contrast, if only in a very limited way, they allow viewers to read and contemplate selected passages of the text, which hang in mid-air, mid-clause, new poetic forms emerging. Soares has a clear fascination with the formal qualities of books: how they look, how they operate when decontextualized, how excisions, underlining, and re-assemblages disorient and remake the sense of a text. These aspects of Soares’s project are deeply rooted in a Neo-Concretist understanding of a formal aesthetic of words, one that is activated by readers who are also viewers. Undoubtedly, the Edit series also speaks to the legacies of the dictatorship in Brazil from 1964 – 1985, especially Brazilian artists’ fraught engagement with print media during intense periods of censorship. Her text pieces are perhaps the most engaging works in the exhibition, distilling the essence of the dialectic between the personal, emotional content of the artworks—their poetics—and their formal construction—or aesthetic building blocks, a dialectic that can be found throughout the works on display. Here one is tempted to speculate that Soares’s formal training in modernist architecture from the Universidade Santa Úrsula in Rio de Janeiro had an influence on her artistic language, especially her formal constraint, and her pervasive interest in space.

Any Moment Now (Fig 3, det.), first installed in 2014, serves as the title piece of the show and is featured in the first room of the exhibition, Santa Barbara Museum of Art’s grand entrance hall. Composed of vintage dust jackets mounted on linen panels and arranged in a geometric grid, the 365 panels reference time both in their number and in the chosen titles, which repeatedly play games with colloquial expressions concerning time. Mounted for a museum exhibition in this way, the extraordinary artistic qualities of the dust jackets become evident. Simultaneously visually inventive and stylistically dated—dust jackets in the digital age—the viewer is brought into a seemingly private realm of nostalgia. Museum visitors point out to one another particularly bizarre or lovely titular puns or graphic designs. On one of my favorites is the jacket from Always Comes Evening, a 1957 book of poetry by Robert E. Howard, on which garishly colored monsters cavort across a black ground.

When considering the formal choices in Soares’s title piece, Any Moment Now—for example, the arrangement of 365 rectangular shapes into a grid—as well as her place within artistic genealogies, the Neo-Concrete artist Lygia Pape and her experimental “book” works come to mind. Interestingly, Pape taught semiotics and architecture at Santa Úrsula until 1985, the same university where Soares completed her degree in 1987. Pape’s book series, such as Book of Creation (1959-60) and Book of Time (1961-63), are significant precursors to Soares’s Any Moment Now. Pape’s Book of Time employs 365 colored, wooden reliefs to produce a similarly abstracted calendar, a controlled, colored shape-world mounted on the wall. Soares’s artistic departure from Neo-Concrete artists, like Pape, however, is in her post-conceptual approach. Soares retains a strong investment in form and space, but adds a fascination in the potent, highly personal associations awakened by mundane objects. Mid-century dust jackets, with their color, variety, humor, sexual provocations, and passion, signal evanescent psychological dimensions and memoryscapes.

The themes of nostalgia, ephemerality, and formal austerity reach a still higher pitch in another of Soares’s book-based installations, For To (X), (Fig. 4), of 2017, an assemblage of yellowing dedication pages torn from antique books and arranged into a tight oval on the wall. Again, formal echoes with other works speak to a careful curatorial hand, the oval shape of the installation matching those of embroidery frames used in other works peppered throughout the show. The dedication pages entice the viewer with endearing, witty, and outré traces of the emotional lives of authors and gift givers, whose frequently obscure inscriptions hint at experiences of love, remembrance, and reverence that could have been either profound or trivial, the reality of which is now lost. Installed in the same room as For To (X), is her beautifully wrought marble mattress and pillows, which enhance the sense of inhabiting a dream space. Reminiscent of elements found in Neoclassical tomb sculpture—the beds or couches upon which the deceased repose—Untitled (Mattress II) (from After), of 2008, instead depicts a cheap and well-worn mattress hand-carved from white marble. The sumptuousness of the material and the skill of the craftsmanship contrasts paradoxically with the object represented, its cloth covering so thin and worn out that the underlying construction of the mattress is revealed. Memory takes a different form here; the bare and dingy mattress lying directly on the floor suggests a considerably less cozy past than the warm and whimsical wishes expressed in the dedications.

The organizers of the exhibition, Julie Joyce and Vanessa Davidson, by minimizing labels and shunning developmental narratives and other curatorial interventions, allow visitors the luxury of an almost unmediated interaction with Soares’s environmental installations. The sleek minimalism of the show is likely an effect not only of Soares’s investments in minimalist aesthetics and language within the artworks themselves, but also of her strong presence in the show’s planning and execution. The tone of the exhibition has a gallery-like shimmer, a mid-career retrospective unmoored from social, political, and cultural context. There is little noise from outside the walls of the museum: no discussion of Soares’s own biography, including her migration from Rio de Janeiro to New York. But for those who seek them, transnational currents—memory, loss, and multilingualism—are there to be found in Soares’s art, just as they are for many Latin American artists of her generation.

For those who did not have the chance to see Valeska Soares: Any Moment Now in Santa Barbara, it will open at the Phoenix Art Museum this coming March. The beautifully produced catalogue provides short but substantial essays by Julie Joyce, Júlia Rebouças, Vanessa Davidson, Jens Hoffmann, and Rodrigo Moura on poetic themes that emerge from Soares’s work: love, language, texture, and the archives and libraries that inhabit one’s imagination. The Curatorial Research Assistant for the show, Jennifer Sales, contributes an important glossary of the most significant objects from Valeska’s longer career, including works not included in the exhibition.

As the pièce de résistance of the show—Any Moment Now—suggests, time may well be Soares’s true artistic medium. Time’s emotional consequences—longing and loss—are the connective tissues that bind together the exhibition. Visitors who are both attentive and attuned will depart from Soares’s abundant, austere deconstructions and reconstructions of literary, domestic, social, emotional, and material worlds with a sense both of heartache and delight.

Amy Buono teaches Latin American Art in the Department of the History of Art and Architecture at the University of California, Santa Barbara, and is affiliated as a Researcher at the Universidade do Estado do Rio de Janeiro. Her research has been supported by fellowships from Fulbright, Fulbright-Hays, SSRC, CASVA, the Getty Research Institute, the Max Planck Institute for the History of Science, and FAPERJ. Her scholarship deals with materiality, memory, and museums, with a special focus on Brazil.