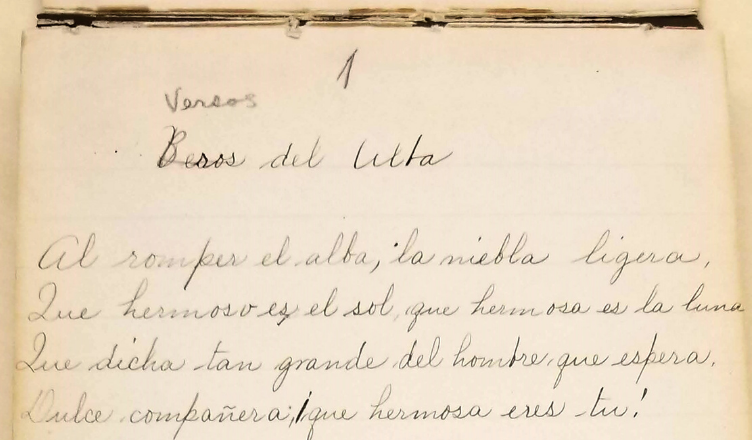 Manuela García’s devotion to music reveals the centrality of the feminine voice in the sonic history of the Southwest. Over 100 wax cylinders of her singing were carefully preserved in the Autry Museum’s archive, but her story had been separated from her songs. In one sepia photograph, she gazes out of frame. In another, she stands with a group of women by the trunk of a thick-limbed tree, branches wide as elephant legs. I was asked to write a poem to honor her for the centennial of women’s suffrage. In order to celebrate her in poetry we first had to restore the missing link between inert archival objects and her life.

I first learned of Manuela García from curator Janice Ngan at a Korean restaurant on Olympic Boulevard over bowls of spicy tofu stew. Ngan wanted to highlight García’s wax recordings at a public engagement event for the exhibition What’s Her Story. As we savored pickled cabbage, and scraped the stone bottom of a bowl of bibimbap, Janice’s imagination levitated between us above the savory plates. I saw people walking through shafts of sound beamed across the museum courtyard like Star Trek teleportation. These wax recordings are recognized at the root of Latinx music in L.A., but our hemispheric research revealed that they are also the earliest known recordings of classic Mexican songs anywhere in the Americas.

The pandemic reached California shortly after Ngan introduced me to community engagement producer Brittany Campbell, and music producer John Hendicott. We pivoted the live event to broadcast online and adhere to public health mandates. I reached out to Ani Boyadjian who enlisted a team of special collections librarians from the Los Angeles Public Library (LAPL) to unearth information on García’s life including her studies, professions, dwellings, and family members. The librarians introduced us to Marissa Lopez who was excited to map García’s history in space.

As a writer, I wanted to see García’s pages. She curated her ideas in her diary. Music and handwriting were her personal technologies. On the cover of her journal she wrote: “— 1901 —, Manuela García, 1115 S. Olive St., Los Angeles.” With the museum facility shuttered, and her last recorded dwelling now a parking lot, we even toyed with the idea of projecting her sounds and images on the walls of downtown skyscrapers. Eventually, we chose cyberspace.

García crowned the first page of her notebook with the number one, drawn with a sharp angled hat. Beneath the number was a song written in impeccable cursive lettering on an unlined page. She drew a mark through the first word in the title, “Besos,” and floated the corrected spelling “Versos” above it. Kisses and verses. Her editorial mark inspired the name of the project: Versos y Besos: The Anthrophony of Manuela García.

At first, I misread her handwriting “Versos del Alba” (Verses of the Dawn) as “Versos de Luta” (Verses of Mourning). This reflected my mindset during quarantine. Daniel Bellm corrected mourning to dawn (luta to alba), and blood to willow (sang to sauz) in the line: “el sauz y la palma se mecen con calma.” García’s message to us during a pandemic— in a 100-year-old journal-bottle—was to find calm, recognize beauty, and value companionship.

I’m no mariachi, but I think like a capoeirista. The art of capoeira survived tremendous odds due to cultural practitioners’ dedication to education and performance. I reached out to mariachi Jasmín Morales to see if she recognized García’s repertoire, and sent the songs to Delia Xóchitl Chávez from the Mexican Secretary of Culture. The song on the first page of García’s diary had become a mariachi standard sung throughout the region. Chavez traced the path of the song through publication histories. The song had been copy written by a male artist in Mexico fifty years after it first appeared in García’s diary in Los Angeles.

We could not have fulfilled this project without taking a collaborative, hemispheric approach. Working hemispherically meant being attentive to migration and culture, colonization and sovereignty. The earth is an orbiting sphere, and species migration is a natural occurrence. I am a part of those nomadic flows, and so was the family of Manuela García. California is a part of a connected landmass that faces the Pacific Ocean. 100 years later, half of L.A. residents still have familial ties to Mexico, Central and South America.

Manuela García’s story illuminates the circulation of music, culture, and family between California and Mexico. The daughter of Rosario Diez and Ignacio García, she dedicated herself to study, teaching, and music. She was one of ten children born to her twice married mother. She earned a degree in business, became a teacher, studied theater, scored presentations, and threw birthday parties that made the local news. She defended her self-worth and expertise with dignity in sophisticated correspondences with Anglo male power brokers of her time. Manuela García earned her place as a respected voice of early Los Angeles, known for her cultivated knowledge of Mexican music, education, and performance.

The L.A. based women’s mariachi ensemble, Las Colibri, agreed to interpret the song on the first page of her diary. Suzanne García, the company director, arranged a performance of “Versos Del Alba” at La Fonda—an iconic local space for mariachi artists over the past fifty years. She flicked on the lights to reveal towering embroidered mariachi regalia framed on the walls. A century after García wrote in her diary, Angelenos were still singing her song. Finally, I could write the poem.

her voice skips across centuries
floating above the andes, bailando
la zamacueca in a jipijapa hat

la voz de manuela garcía, one woman
more than an artifact, canister of cara negra
more than a check for 12 cents a song

mujer, no dividida
whole — before and after a treaty, la frontera
inventada crossing calles, casas, familias

Amy Shimshon-Santo is writer and educator from Dogtown, a place that no longer exists. She has been nominated for a Pushcart Prize in creative nonfiction (2017), Best of the Net in poetry (2018), and recognized on the national Honor Roll for Service Learning. Amy is the author of the poetry collection Even the Milky Way Is Undocumented (2020), the multimedia chapbook Endless Bowls of Sky (Placeholder Press, 2020), and editor of Arts = Education (UC Press, 2010). Her work has been performed widely, from an Inupiaq cafetorium in Point Barrow Alaska to the Kennedy Center for the Arts, and been published by Prairie Schooner, ArtPlace America, Yes Poetry, Zócalo Public Square, SAGE Publications, Entropy, Public / Imagining America, and SUNY Press, among others. She is currently an Associate Professor of Arts Management at Claremont Graduate University.