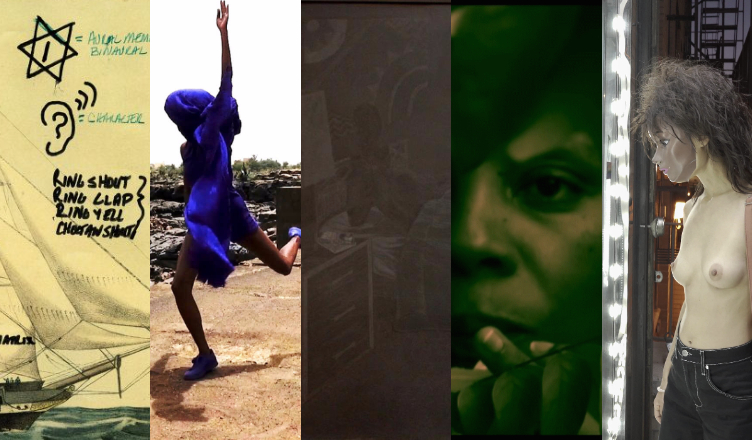 On April 23, 2016 I attended the Chicago opening of Kerry James Marshall’s “MASTRY.”1 Most people, seduced by Marshall’s vivid​ figurative tableaux, passed by the premiere of Black Painting​ (2003-2006). I stood seduced by its radical departure, a theatre of refusal, a seemingly blank, black canvas. Cosmic in its opacity, shades of blackness comprise a constellation, revealed by a luminous flag oscillating in the uppermost corner of this obsidian skyscape. Within the frame, this light pushes and pulls the eye until forms emerge: two figures recline in a bedroom. On the nightstand sits Angela Y. Davis’s, If​ They Come in The Morning: Voices of Resistance​.

At 4:00am on December 4, 1969 fourteen members of the Special Prosecutions Unit of the Chicago Police Department were stationed around the Black Panther Party apartment at 2337 West Monroe. Entering with a “no knock” warrant and allegedly looking for arms, “They fired 98 shots into the apartment with a submachine gun, shotguns, pistols and a rifle.”2 Their target was Fred Hampton, the incandescent commander-in-chief of the “international proletarian revolution.” In the absence of Huey P. Newton and Eldridge Cleaver, Hampton at twenty-one years old was Deputy Chairman of the national Black Panther Party.3 According to accounts, Hampton fell asleep mid-sentence while speaking with his mother on a wiretapped telephone line. Simultaneously present and absent, sedated by secobarbital, his body slumped over the right side of the bed.

Black Painting reimagines the mise-en-scène of this room moments before police entered the bedroom. In the painting, a tabletop pyramid, a family photo, a pillar lamp, and two books rest upon a three-drawer nightstand. Above the bed hangs a kaleidoscopic composition of concentric semi-circles that conjures AFRICOBRA artist Jeff Donaldson’s Paternal Homage.4 Its radiating light produces a halo illuminating the figures in the shrouded bed. A Black Power fist stands on a second nightstand beneath another pillar lamp casting light on two hieroglyphic pictograms on the black shale wall.

The first evokes Aaron Douglas’ The​ Founding of Chicago (1928). Upon it hangs a beaded pendant necklace. In Heirlooms​ and Accessories​ (2002) Marshall employs this charm device to isolate the faces of white women who are witnesses at the scene of a lynching.

In Black Painting, the witness is pictured as a Black woman, likely Akua Njeri. Hampton’s fiancé, Njeri gazed into his eyes as he took his last breath. She lay in bed beside him before the raid began; then during it, she laid atop his barely clothed body, blocking bullets. Eight months pregnant at the time, her trauma, like an heirloom, was passed from generation to generation.

In the shadows, his white-collared shirt hangs on the chair rail; his pants drape over the seat of a now eternally empty chair. In the uppermost corner the Panther flag, inscribed with “Power to the People” flies above a four-drawer dresser. Only the panther’s body is visible, its head blocked by a lampshade; the Panther has been decapitated. At the lowermost point of the composition a pair of what I imagine to be ruby red slippers suggest the pool of blood where the final two shots seared into Hampton’s brain. When the shooting stopped, Njeri heard an officer announce, “He’s good and dead now.”5

In a memo written nine months prior to the murder, FBI Director J. Edgar Hoover’s COINTELPRO (COunter INTELligence PROgram) instructed officers to neutralize the Black Panther Party by “preventing the rise of a Messiah who could unify and electrify the Black nationalist movement.”6 Hampton’s bodyguard, an FBI informant, betrayed him by drawing a floor plan of the apartment, detailing his bedroom. Ironically, by assassinating this rising star, they assured his immortality. Disciples queued outside the shrine, stood in the bloodstained scene, snapping shots of bullet holes, sorting papers, saying prayers. Over 5,000 attended Hampton’s open casket funeral. As the casket closed, they chanted in unison Hampton’s call and response, “I am a revolutionary.”

Local, national, and international media circulated black and white images of Hampton’s bloody body being dragged from his bedroom. Although archival photographs, the drawing, survivor testimony, collective memory, and film footage inform it, the painting transmutes all traces of photographic evidence.7 Resisting the pornography of violence, Marshall exploits the revolutionary potential of the underpainting.

Black​ Painting​ inverts the invisibility of Black heroes, interrogates the illegibility of Black radical narratives in the Western pictorial tradition, and expands the aesthetic possibilities of black paintings.8 ​Exploring the phenomenology of blackness and the chromatic effects of this single hue on fiberglass, Marshall subversively inserts himself into a lineage of white abstractionists famous for black paintings. He contests Kasmir Malevich’s ​The Black Square​ (1915) as “ground zero,” the canonical transition between representation and abstraction. Consecrating the sacred site of the Black liberation struggle, 2337 West Monroe, Marshall also defies Ad Reinhardt, Barnett Newman, and Mark Rothko’s definition of monochromes as apolitical, nonobjective, nonrepresentational, nonfigurative. Mixing Ivory black, Mars black, Carbon black acrylic pigments, juxtaposing warm against cool, he perfects a process begun with Portrait of the Artist as a Shadow of his Former Self​ (1980) and Invisible​ Man ​(1986).

As a witness to the Watts Riot/Rebellion (1965), Marshall constructs a ‘counter-archive’ that inscribes Black icons and iconography of the Civil Rights and Black Power movements into the canon through black paint as medium.9 An image of Black life to counteract images of Black death, this is a painting for the people. Composed by contorting the artistic language of white men and infusing the lineage of Black activists/artists, Marshall invokes a lexicon of Black liberation. Marshall argues, “that extreme of color, that kind of black, is amazingly beautiful and powerful…What I was thinking to do with my image was to reclaim the image of blackness as an emblem of power.”10 Black Painting is a weapon of political warfare, signaling solidarity against systemic, state-sanctioned violence. Marshall’s monumental, politicized picture plane declares, as Fred Hampton did, “You can kill the revolutionary, but you can’t kill the revolution.”

Erin Jenoa Gilbert is a curator specializing in modern and contemporary art. Most recently the Curator of African American Manuscripts at the Smithsonian’s Archives of American Art, she has previously held positions at The Art Institute of Chicago and The Studio Museum in Harlem. Her curatorial projects examine the physical and psychological connection to land, the trauma of displacement, and the body as a contested terrain. Gilbert presents work by those whose contribution to the canon has been overlooked, particularly women, abstract, conceptual, and performance artists from the Deep South and the Global South.