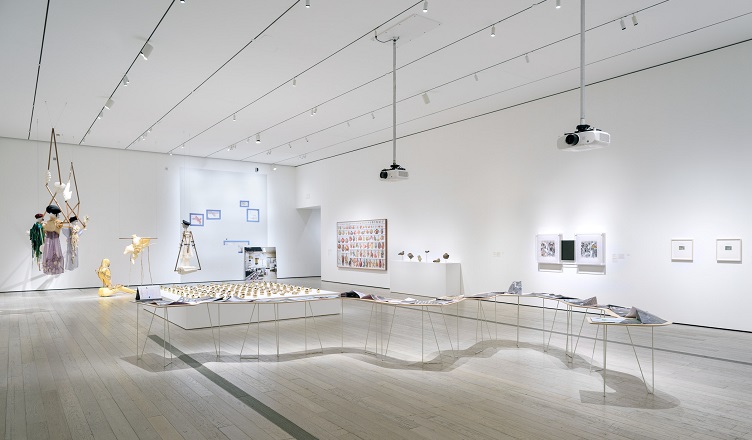 Organized as part of the Getty’s Pacific Standard Time: LA/LA initiative, the exhibition A Universal History of Infamy is noteworthy for its willingness to question the core principal of the initiative: to examine and address the absence of Latin American and Latinx art in museums and in cultural history at large. Taking its title and inspiration from Jorge Luis Borges’s 1935 collection of fictional biographies of famous individuals, this multi-venue exhibition is the result of an experimental approach to constructing a survey of Latin American art. Rather than conducting a search for artists whose works meet this geographic or cultural criteria, curators José Luis Blondet, Rita Gonzalez, and Pilar Tomkins Rivas worked over the last several years to invite sixteen artists and collectives from Latin America and its diaspora to participate in two month residencies at the 18th Street Arts Center in Santa Monica. The results defy artistic categories, mixing painting, sculpture, installations, photography, film, video, sound, performance, and interventions. Yet despite their heterogeneous forms, they share a preoccupation with practices of collection and display in encyclopedic museums such as LACMA, and they ask how these practices function in the constructions of identity, history, and geography to question, like Borges, the nature of absolute truths.

As Pilar Tomkins Rivas has noted, the curators’ unorthodox approach to exhibition-making was meant to encourage a lateral engagement with Los Angeles itself. They wanted the show to decentralize the concept of cultural epicenters that dominate much of contemporary art and its discourses.1 Allowing the time and space for such conversations to develop is an unusual practice within major art institutions, but the results here are fruitful.  This collaborative effort spans three distinct venues: mostly new projects are displayed at LACMA; small-scale and site-specific works by the artists were presented at 18th Street Arts Center as a means of connecting studio practices to the LACMA exhibition; and artist and educator Vincent Ramos will present a pedagogical exhibition of objects drawn from LACMA’s collection alongside works by contemporary artists at Charles White Elementary in MacArthur Park.

The organization of A Universal History of Infamy at LACMA takes an anti-encyclopedic approach by loosely grouping artists together around shared concerns rather than through visual or aesthetic affinities or regional identification. This strategy successfully destabilizes the typical viewer experience by requiring more engagement: the gaps to fill are more frequent than usual; the connections less easily drawn. The projects that open the exhibition look to literary tradition for probing dogmatic categories and supposedly universal histories. In the first gallery, Argentine artist Dolores Zinny’s Word for Word: Disolución for Expansion (Borges and Twain), 2017, is based on a story about the Mississippi River that Borges cribbed from the famed U.S. author.  The work features two nearly identical paragraphs taken from the English and Spanish versions of the story, yet Zinny emphasizes the fact that Borges replaced the word “dissolution” with “expansion,” thereby questioning the authority of the author and the function of translation in the creation of truths. Also in this gallery is a project by Argentine artist Carla Zaccagnini in which she intervened in the museum’s collections by plucking a painting of Brazil by U.S. artist, F. Childe Hassam (1859 – 1935) from the American art galleries and placing it in the context of a contemporary art exhibition. This painting is displayed alongside Zaccagnini’s video, which was inspired by Hassam’s painting as well as Futuro do pretérito/Conditional/Pospretérito (2017), an installation of first edition books by European authors on the subject of Brazil in a vitrine containing spiders that will weave a web around the books for the duration of the show.

Many of the artists directly engaged with LACMA’s collections. This was one of the most successful strategies seen in the show, as it agitates against easy categorization while also offering alternative approaches to the collecting and display practices found in most institutions. One noteworthy example: Los-Angeles-based artist Gala Porras-Kim’s large mixed-media painting, 109 West Mexico Ceramics from the LACMA Collection: Colima Index (2017), and series of ceramic vessels outfitted with GPS trackers (Future Artifacts after West Mexico Ceramics: Los Angeles Index, 1 – 6). Here, the artist created a visual index of selections of objects from the Proctor-Stafford Collection of pre-Hispanic ceramics to question how meaning and value are assigned to objects and how collecting changes this process over time. Also in this gallery is Resillentes/Resillients, part Chilean artist Josefina Guilisasti’s interpretation of the pre-Hispanic figurines called gritones or screamers, which have been replicated in shimmering bronze. Arrangements of these gap-mouthed figures are scattered throughout the exhibition as well as in LACMA’s Art of the Americas galleries. Further into the exhibition we find Puerto Rican artist Michael Linares’s installation Museo del palo (Museum of the Stick) (2013 – 2017) an altar-like display of myriad sticks that the artist has amassed, including several objects from the museum’s collection—it is up to the viewer to guess which ones. Linares’s Museum of the Stick is accompanied by his 2014 video in LACMA’s collection, a compilation of found visuals of the use of sticks in the human and natural world, connecting seemingly disparate cultures and societies through an examination of the universal use of this object across many cultures.

In the second gallery, Los Angeles artist Vincent Ramos satirically embraces the concept of the encyclopedic museum to address constructions of Mexican American cultural identity across the twentieth century in Ruins Over Visions or Searchin’ for My Lost Shaker of Salt (Ante Drawing Room). Functioning like a museum of Mexican American presence in U.S. popular culture, this work features archival materials including magazines, newspapers, and vinyl records installed along with portrait drawings of celebrities whose Mexican and Mexican American roots were often veiled or erased, such as Herb Alpert, Lynda Carter, Anthony Quinn, Freddie Fender, and Vikki Carr, thereby raising questions around authenticity and visibility in the Mexican American experience. Adjacent to Ramos’s installation is another project that addresses Latin America and Los Angeles as disparate yet inextricably linked geographical regions. Venezuelan artist Ángela Bonadies examines two public murals by the famed Mexican painter David Alfaro Siqueiros (1896 – 1974) in Los Angeles— Street Meeting and América Tropical, which were created in 1932 but were soon whitewashed over for their controversial content. Bonadies probes the recent efforts made to recover and restore the murals, providing further commentary on the obscuring and erasure of contributions by Latin Americans to the cultural landscape of Los Angeles.

Much of the work in A Universal History of Infamy seeks to redefine the limits of the exhibition space by intervening in and activating spaces outside the gallery walls. This includes the installation on the façade of LACMA by Argentine artists Zinny & Maidagan. Their Word for Word: Dècor for Distance addresses the ubiquitous presence of the palm tree in the Los Angeles landscape and as a symbol of Latin America. Installed near Michael Heizer’s large rock sculpture, Levitated Mass (2012), is the NuMu, a tiny portable egg-shaped structure created by artists Stefan Benchoam and Jessica Kairé. NuMu is Guatemala’s only museum dedicated to contemporary art. It travelled from Guatemala to Los Angeles on a crowd-funded journey to present two retrospective exhibitions of notable cultural figures from Guatemala: the experimental composer Joaquín Orellana; and, currently on view, performance artist Regina José Galindo.

A Universal History of Infamy’s charge to defy categories and institutional limits was bolstered by the staging of performances by the Guatemalan artist Naufus Ramírez-Figueroa and Ecuadorian artist Oscar Santillán. In LACMA’s Sculpture Garden, Ramírez-Figueroa held several performances of El Corazón del espantapájaros (The Heart of the Scarecrow), a tragicomedy written by Guatemalan playwright Hugo Carrillo that was shut down due to government censorship in a 1975 performance. Loosely scripted and free of dialogue, it featured the characters of an oligarch, a dictator, a soldier, a cardinal, and a scarecrow in a commentary on the violent and traumatic histories of Guatemala and other Latin American countries. The masks, costumes, and props that the artist created for the performance are treated like objects or entities in and of themselves. When not in use, for instance, they are safely stored away in the first gallery of the exhibition. Here they hang upon large, sculptural apparatuses that give these vestiges a powerful yet ghostly presence that call attention to the power of theater to serve as a form of resistance.

There was also a performance of Oscar Santillán’s Correspondences (after Charles Baudelaire), for which he created a data visualization system for translating the cracks, crevices, and fissures in a building into musical notes. As the sun began to set on the LACMA campus, an ethereal voice descended from above and soon, there appeared an opera singer, dressed in a red ball gown and wearing heavy black boots. As she wandered through the museum’s exterior spaces, her vocalization rendered typically overlooked spaces of the museum perceptible as their absences were converted into sounds ranging from lilting tones to primal screams.

A Universal History of Infamy successfully demonstrates the rewards that come with risky approaches to the production and display of art while illuminating the ways in which a city and its institutions may benefit from sustained dialogues with contemporary artists. The exhibition meets the challenge presented by its curators to re-evaluate the definitions of Latin American art its diasporas, an issue that is more pressing now than ever. The artists’ projects hold a mirror to our current socio-political moment as the value of absolutes such as the truth are being manipulated through constructs like “fake news” and as patriarchies are being overturned and simultaneously parts of society are increasingly turning to tribalism and separatism. As this experiment in exhibition-making has proven, the work of museums today should be to critique, adjust, or even reject their own habituated methods, and the troublesome categories and histories that underwrite them.

Arden Decker (PhD, the Graduate Center, City University of New York) is an independent art historian and curator. She has been a fellow at the Smithsonian Latino Museum Studies Program and was the recipient of a Fulbright-García Robles award for dissertation research in Mexico City (2011-2012). Her writing has appeared in the publications caa.reviews, Gaceta Luna Córnea, and Terremoto MX and she has contributed artist interviews and short essays to exhibition catalogs, most recently for Grupo Mira: Una contrahistoria de los setenta en México (forthcoming, Museo Amparo). She has assisted in the production of numerous exhibitions in the United States and Mexico and served as a guest curator for the exhibition Gerzso, Gerzso, Gerzso at the CCU Tlatelolco and as co-curator of the exhibition Niérika: el archivo Lilly at the Centro de la Imagen in Mexico City. Currently, she is developing a manuscript based on her dissertation, which examines the proliferation of art interventions in Mexico City during the 1960s and 1970s.