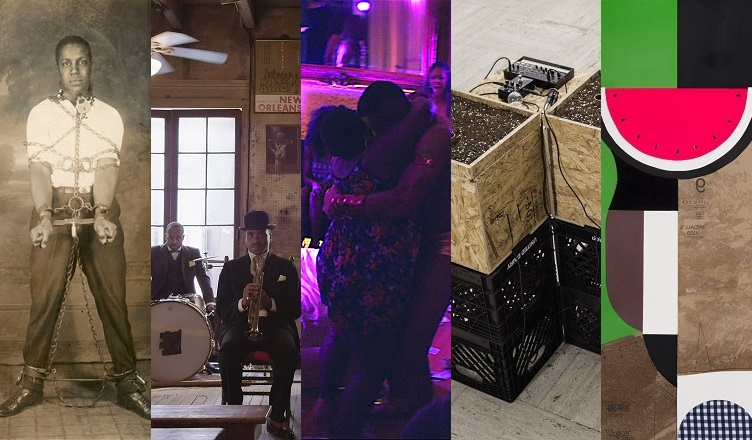 The man stands in a photographer’s studio, posing in front of an elaborate painted backdrop. He is dressed in a white, short-sleeved shirt, dark dress pants, and shiny dark shoes. He faces the camera squarely. His look is direct, his expression calm, perhaps just edging toward a smile. He is bound from neck to ankles in chains.

This startling photograph, made by James VanDerZee in 1924, is entitled Escape Artist. It was produced during the height of VanDerZee’s portrait practice in Harlem, and bears a number of the photographer’s hallmarks, including the painted backdrop, beautiful lighting, and his name, inscribed on the negative and reproduced as white text in the photograph.1 But the portrait also puts performance as well as photography under pressure, evoking a fluctuating dynamic of constraint and escape that animates a long history of African American artwork and representation.

In the photograph a number of factors disrupt the illusory space that is conjured in the studio. The backdrop suggests an opulent interior with a large tapestry portraying a pastoral scene. The effect of the backdrop’s illusion is interrupted where it meets the square-patterned, linoleum flooring of the studio. But the most startling disruption lies, of course, in the discord between the studio space and the chained subject. This is a portrait of a black man shackled and bound, resounding with the histories of slavery, lynching, and incarceration in the United States. His chains and shackles evoke slavery as well as the chain gang, marking a legacy of surveillance and violence meted out on the black body, a legacy passed on from slavery to the carceral state by the Thirteenth Amendment to the U.S. Constitution, which abolished slavery except in cases of criminal conviction and imprisonment.2

The photograph is likely the portrait of a performer and intended to serve as a publicity image. It resembles a photograph of the most famous American escape artist, Harry Houdini, made in 1899, which presents him similarly bound in chains and padlocks. But in an African American cultural context, “escape” activates another register, the historical legacy of slavery and fugitivity, recalling not only Houdini, but also the men and women who escaped from slavery. Among the most famous fugitive slaves, Henry Brown shipped himself from Virginia to Pennsylvania in a wooden crate, and then rehearsed his escape for Northern audiences. His performances emphasized his “conditional and fleeting liberty,” underscoring, in Daphne Brooks’s words, “the ambiguities of liberty and bondage for African Americans” in the wake of the 1850 Fugitive Slave Law.3

As a formal portrait made in VanDerZee’s studio, Escape Artist also invites one to consider the legacy of photographic representation by which VanDerZee’s subject is bound, or “enframed.”4 Escape Artist calls forth the complexities of “black representational space,” reminding one of what Darby English has called “the historical contents of certain contemporary constraints on artistic freedom” for African American artists.5 Some of these historical contents include nineteenth-century scientific photographs of the enslaved, such as the daguerreotypes made by J. T. Zealy for the polygenesist Louis Agassiz in an effort to categorize black men and women as less than human; or the photographs of black wet nurses and servants with their white charges, presented as property, props and supports in the reproduction of whiteness; or the horrors of black men and women bound and hanging from trees in the photographs of lynching used to commemorate and spread white terror.

Escape Artist recalls the circumscribing pressures of racist representation as well as demands for “positive images.” The photographer’s studio was a place in which racist forces could be challenged, in which photography could be used to express black survival and resistance, and his portraits from the 1920s and 1930s are shining examples of the performance of African American aspiration and futurity. But such portrait practices, although essential, also produced their own constraints, bolstering the burdens and disciplines of propriety, striving, and uplift.

When I first saw Escape Artist, the image called to mind a number of contemporary artworks,6 but most forcefully the photograph reminded me of Jefferson Pinder’s performance of the same name. In Pinder’s Escape Artist (2012), an assistant secures Pinder in a straitjacket and hangs him in a harness from a tree, at night. Illuminated by a glaring white light in the darkness under the branches of the tree, Pinder then struggles to release himself from the constraints.

Pinder’s Escape Artist eerily recalls the nightmare of lynching in the United States, and he performed the work at the site where Matthew Williams was beaten and lynched in a straitjacket on the courthouse lawn in Salisbury, Maryland, on December 4, 1931. The work is not exactly a re-enactment, but a redirected performance that conjures a history of racial violence. Pinder’s deflected re-enactment suggests that the legacy of racial violence pervades the present in multiple registers, including performance.7

Pinder practiced his escape repeatedly, but when it was time to carry out the act for an audience, the hook on the harness from which he was suspended caught on the straight jacket, and he could not free himself. In the video of the performance one sees his struggle against the restraints become real. There are moments in which his panic is palpable, in which he is no longer performing. Twisting and writhing at the end of a rope, he is caught by the re-performance.

VanDerZee’s escape artist, unlike Pinder’s, betrays no agitation. He stands calm in the photographer’s studio, displaying his shackles. The portrait emblematizes the circumscribed terms through which black men enter representation in the United States. It suggests that the historical shadow images and violent pasts that pierce the present through performance are never far away. VanDerZee’s photograph of 1924, like Pinder’s performance, recalls the ways in which African American artists engage a repeating dynamic of constraint and escape, of violent histories and fugitivity. It encourages one to consider a long legacy of race and representation, and the ways in which African American artists have been compelled to perform as escape artists.