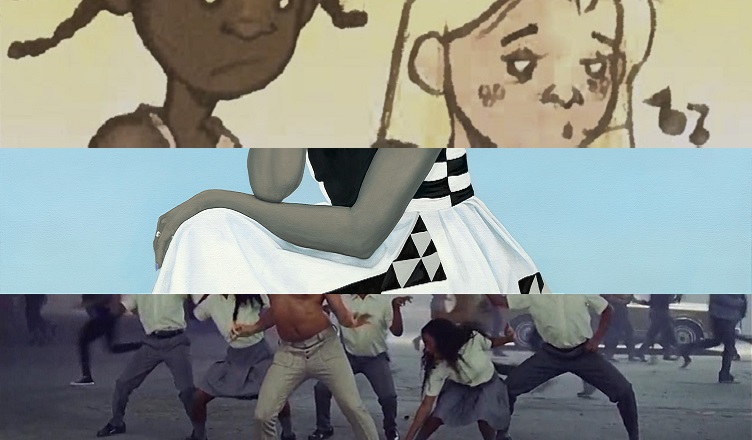 Jeremy Love’s graphic novel Bayou (2009) is an audacious bricolage. A Southern tragedy set in the fictional town of Charon, Mississippi during the Depression, Bayou subverts genres to offer something new. Lee Wagstaff, our plucky and determined heroine, struggles to rescue her devoted and industrious father before the townspeople lynch him for a crime he did not commit—the kidnapping and murder of Lee’s white playmate, Lily Westmoreland. While it is only a matter of time before he hangs, only Lee knows the truth: that the agent of a

mysterious and malevolent creature known as the Bossman has seized Lily and pulled her into the swamp and through the proverbial looking glass. The bayou that borders the community of Charon contains a gateway capable of transporting people to a fantastical world—like the boatman that serves as the town’s namesake. Charon is a place populated by anthropomorphized versions of Br’er Rabbit, Br’er Bear, the Tar Baby, Cotton Eyed Joe and other fantastic creatures derived from African American and Southern folklore. Guided by her guardian angel Billy Glass—a young boy from Charon who was reincarnated after he was lynched for whistling at a white girl—and aided by the shambling figure known only as Bayou, Lee fearlessly journeys into the Bossman’s realm to rescue Lily before it’s too late!

While the above synopsis captures the central elements of Bayou’s plot, it fails to elucidate the ludic charm of Love’s approach. He playfully alludes to literary work from disparate sources and challenges derogatory conflations of blackness and animality by upending the comic book motif of “funny animal” characters.1 Love also contests the racial conventions of children’s literature by granting a vulnerable black girl, Lee, with the pluck and resourcefulness that Twain permitted Huck Finn. What is more, Love redeems the tragedy of Emmett Till by crafting an analogue—Billy Glass—that demonstrates the cost of society’s refusal to grant black children innocence in order to resist the monstrous white supremacy that condemns them.2 Indeed, with an illustrative style that alludes to George Herriman’s Krazy Kat, Walt Kelly’s Pogo, Bill Watterson’s Calvin and Hobbes and the portraiture of Charles White and Kerry James Marshall, Love depicts the traumas of racism as diminishing its perpetrators and ennobling its victims.

Love’s attempt to mythologize and therefore transform the daily trauma that shaped black life in the Jim Crow South distinguishes his narrative even as the contours of that trauma define not only life in Charon, Mississippi but also in the crazy-quilt fantasyland that has lured both Lily and Lee into its environs. Though Lee and her widowed father might subsist precariously as sharecroppers, their potential proscribed by the toxic social codes of an unreconstructed Mississippi, those same limitations instill in Lee the resilience she will need to rescue Lily and free her father.

The first image to promote Bayou features a crow perched on a “colored entrance” sign with an arrow that instructs African Americans on how they must move in public. The crow’s head reverses the direction of the arrow by looking back across his body, with the curvature of the beak directing the reader’s gaze to the dangling feet of a lynched figure in the panel inset. His gaze is matched by the indistinct white figures in the background of the panel inset, including a child perched on the shoulder of his father. The left of this panel features a Southern gentlemen dressed in a white suit and tie, while the others wear clothes that mark them as artisans and laborers. These menacing and indistinct men recall those participants and observers in the lynching postcards that circulated in the South. They represent the communal and the extra-legal violence designed to maintain the racial order inscribed to by the “colored” sign.3

The second image, from the interior of book one of Bayou, confirms the premise of the promotional image by illustrating the exploitative nature of Lily’s “friendship” with Lee. Lee and Lily discuss the fate of Billy Glass, which is an attempt on Lee’s part to process the trauma of discovering his body. When Lee describes Billy’s ravaged body, Lily demonstrates how white supremacy constrains empathy and understanding by blithely repeating her mother’s admonition which sanctions his lynching. Lily’s callousness stops Lee cold, and she tries to repair the rupture in the conversation by complimenting Lily on her hair. The fourth panel on the page, silent except for Lily’s whistling, communicates Lee’s dismay by contrasting the sunny yellow background with Lee’s slumped shoulders and downturned mouth. Lily’s next statement reinforces her lack of compassion as she insists that they go down to the Bayou, which Lee identifies as “a bad place.” Lily’s aimless whistle and refusal to credit the dangers Lee identifies demonstrate how the naïveté permitted by white supremacy tempers Lee even as it makes Lily vulnerable.

The pastels that Love uses in both images—sky blues and cornstarch yellows—contrast nicely with the blacks and browns that link crow and tree to vulnerable black bodies. Lee leans against a tree as she plays in Lily’s blonde hair, the brown bark calling attention to her once white but now dingy shift. Of course, the same tree that shelters her might also provide support for a hangman’s noose. In the images above, Love grants both trees and black bodies a similar visual resonance, rendering both with earthen browns and parallel hatching that suggest that evil has taken root in the land. In Bayou, swamps, swimming holes, and even trees teem with menace because the violence of white supremacy infects the very landscape. Love disrupts the belief system that makes nature feel unsafe and that destroys the innocence of children like Lee Wagstaff by making them responsible for the safety of black masculinity and the preservation of white femininity. By collapsing the distance between reality and fantasy, man and animal, childhood and adulthood, innocence and guilt, Love’s Bayou achieves a moral complexity that edifies even as it enchants.