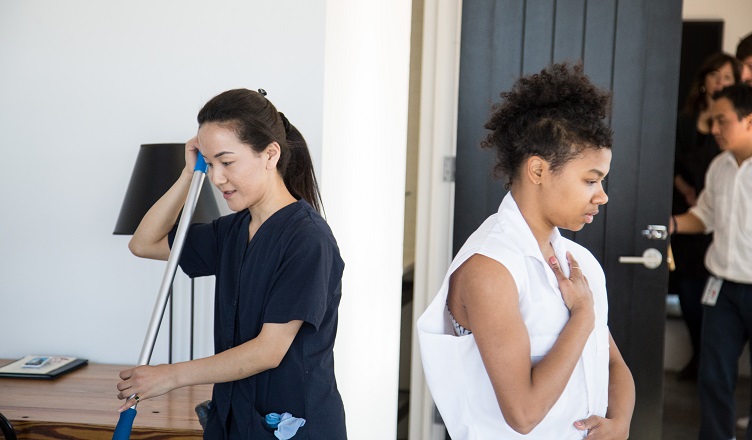 Sociologist Rachel Sherman observes that guests’ behaviors and routines very much affect housekeeping and turndown staff attending to luxury hotel rooms, even if they perform their work invisibly and without much direct interaction with customers.1 Workers adjust themselves according to the range of traces left by different guests—soiled sheets, a clogged bathtub, displaced furniture pieces—which constantly shape and dictate the staff’s pace and movements as they proceed around a room. This variability disrupts the carefully choreographed, assembly-line-like movements involved in making beds or vacuuming floors as efficiently as possible so as to maximize the workers’ output or “room quota.” Sherman’s findings suggest that the guests’ absence itself governs the flow and rhythms of hospitality.

As soon as I was ushered into the 650-square-foot “South 7th Loft” room—one of the more sizable available in the Wythe Hotel—I immediately spotted a performer in a crisp, white jumpsuit, standing near a king-size bed. She repetitively carried out the motions associated with sweeping the floor with an invisible broom, while a blue-uniformed member of the housekeeping staff scrubbed and cleaned the en suite bathroom. Enjoying the eagerly anticipated light of the early spring sun flooding through the floor-to-ceiling windows framing an impressive view of the Manhattan skyline, some audience members found it difficult to comply with the no photography policy. The room—complete with “curated” minibar amenities such as neatly packaged Mast Brothers chocolate bars and locally sourced whiskey—had a distinctly different atmosphere from a run-of-the-mill Marriott or Holiday Inn, with “locally made wallpaper on the walls, handmade ice cream in the minibars and artisanal Brooklyn-made soaps in the bathrooms.”2 I spotted a few furtively taking out their phones to capture the synchronized movements of a dancer-staff pair’s “cleaning” (one actually cleaning the windows and the other reproducing the motions of cleaning). The audience members seemed less compelled to watch the movements of the housekeeping staff than the mirrored actions of the dancers. In white jumpsuits, the dancers followed a choreographed series of movements depicting task-based actions that corresponded to those of their cleaning staff partners. These otherwise “unremarkable” movements of folding linens, scrubbing bathtubs, and sweeping floors, became “remarkable” through their incarnation in performance.

The title of Clean Labour is twofold: it addresses the work of cleaning itself, while also pointing to the messy and complex nature of labor, which is often sanitized and concealed to avoid disturbing the guest/viewer’s experience. While Clean Labour might at first glance be just another exotic performance in a luxury hotel, Fernandes points out that it is in fact intended to critique expectations of a boutique hotel like the Wythe.3 The performance, a collaborative project involving six dancers and the cleaning staff at the Wythe Hotel, made “visible what is too often overlooked—the work of hospitality workers and cleaning professionals whose contributions ensure that our homes, offices, schools, hotels, and public spaces are safe, clean, and livable.”4 Fernandes’s piece draws a parallel between invisible hospitality work and the work of performance: similar to hospitality work, the laboring, physical, and fatigued body of the dancer is often obscured. In the production, the dancers reproduced acts of labor to call attention to the ways hospitality work is performed and, by extension, how performance invokes the strenuous, repetitious, and methodical features of hospitality labor: sweeping the floors from right to left; scrubbing the upper reaches of walls in guest rooms and rooftop restaurants with outstretched arms and cleaning cloths; squatting beside a bathtub, gloved hands moving forward and backward; and kneeling and hunching to scrub floors, enduring back pains and wrist strains. A cursory reading of Clean Labour may suggest that the movements “performed” by the cleaning and maintenance staff and those executed by the dancers mirror one another. The precision of the cleaning labor resembles a carefully prepared choreographic sequence, as the cleaning staff learn over time at which angle they should bend their torso, how wide their arms should stretch, and how quickly they should be pacing around four corners of the bed so as to spread and tuck the freshly laundered sheets with maximum efficiency.

Questioning how the work of performance can upset ostensibly immutable and time-worn establishments or sociocultural practices through inappropriate and uninvited gestures has been a recurring theme in Fernandes’s work. In Sill Move (2014), where dancers moved onto and against gallery walls using rubber balls to release tension in their muscles, he “reposition[ed the] personal, visceral” exercise movement into a more public view.5 By doing so, he encouraged audiences to question the laboring body in motion against the seemingly immobile museum space.6 In In Touch (2015), a solo performer in an art museum animated the displayed and displaced African artifacts, including masks, by dancing unflinchingly in front of, against, and around them, getting “in touch” to “reunite them with body and movements.”7

Indeed, Clean Labour successfully echoed these tensions between performance and labor, clearly revealed in glossy, manicured spaces like museums, hotels, and luxury car stores, laying bare the processes through which bodies are put to work.8 If we consider performance as an organizing optic, then we might also approach the basic movements of work as an organizing optic for the aesthetics of performance, as suggested by Fernandes’s continued probing into the nature of performance labor and performed labor.

However, what was perhaps more muted, if not altogether unsaid, was another layer of critique that gestured to the imbalanced relationship between the guests and the workers, the audience and the performers. If, as Sherman argues, the guests govern workers’ movements even when absent, then what happens when spectators are inserted into a setting that would otherwise be invisible under ordinary circumstances? Surely, the performance upset the routines of both hospitality and dancerly labor. Yet some of the moments during the performance revealed how the relationship between the guests and hospitality workers was still contentious, if not hierarchical.

There was, for example, one “duet” where Charles Gowin and Tenzin Thokme made a king-size bed together by standing on opposite sides and methodically fluttering the top sheet, fluffing the pillows, and tucking in the duvet. At one moment, Thokme hesitated, prompting Gowin to put his hand on Thokme’s shoulder and whisper something in his ear, before the two resumed their bed-making routine. Fernandes later pointed out that Thokme also experienced vulnerability before and during the performance, as “performing” in front of spectators was an unfamiliar experience. They would do their work as they were accustomed to doing, until they were “interrupted” by dancers who tapped on their shoulders, cueing them to stop. This, Fernandes explained, was a difficult experience for the cleaning staff who had been used to managing their own time.9 While invisibility of labor is a problem, the presence of the audience members/potential guests functioned as added pressure, reproducing yet again the hierarchy between the workers and guests/spectators. Mostly calm, quiet, and reserved, the staff, when they had to speak, did so almost silently: a little whisper of “Are you OK?” an exchange of knowing smiles, and gentle taps on shoulders. There was no dancing to the songs coming out from the radio, no “speaking out” unnecessarily. So, too, did the scene where all the audience’s attention was focused on those Instagramable images: dancers’ gracefully stretched limbs and slightly angled heads against the impressive backdrop of the skyline, instead of the mundanity of the cleaning actions performed by the workers.

Then there is the question of the invisible labor performed “backstage,” before the show, and post-show that could also be made visible, such as concierge/box office work, curatorial work, office management, and the cleaning of the hotel/performance venue itself. While watching the performance, I was reminded of Spanish director Rodrigo García’s The History of Ronald, the Clown of McDonald’s (La Historia de Ronald, el payaso de McDonald’s, 2004), which I saw a number of years ago in Seoul, South Korea. In it, three actors liberally threw various solid and liquid foods onto the stage, making visible the naked face of the global neoliberal economy and its consumerist culture. The History critiqued the excessive, wasteful, and gluttonous tendency of globalized consumerist culture that desensitizes one’s ability to critique labor and resource exploitation in the food and service industries. After the performance—looking at the various vegetables, processed foods, and wine strewn and spilled across the stage—I overheard one of the in-house cleaning staff make a remark: “I don’t know how I will clean up all of this mess. I’ll have to work until late.” This is not to suggest that Clean Labour enacted a kind of violence in the same way that The History did (albeit inadvertently), but rather to call our attention to the kinds of labor involved before, during, and after performances that often go unacknowledged. In addition to the absent presence of the audience that shapes labor practice, it is unjust practices of (migrant) labor recruitment, sexual harassment, and wage thefts that go unnoticed “behind the doors,” which further add to the problems of invisibility in hospitality work.10

Perhaps, then, the more urgent task that Clean Labour undertook was to make forcibly visible what existed in the background all this time: the presence of the audience and their accountability as spectators and consumers occupying a space made enjoyable by workers/performers. While everyone’s takeaway must have varied, audience members were asked to reckon with the fact that their comfortable space was simultaneously a space of discomfort for others. As for me, various “clean” spaces began to fray around the edges as I left the Wythe feeling the absent-presence of the workers/performers in my own usual moves.

Soo Ryon Yoon is an Assistant Professor in Cultural Studies at Lingnan University, Hong Kong. Her research and reviews on performance, racial politics, and labor, with special attention to South Korea are published or forthcoming in Beteum (비틈), Theatre Journal, Journal of Contemporary Research in Dance (当代舞蹈艺术研究), positions: asia critique, Inter-Asia Cultural Studies, and an edited volume Dancing East Asia (edited by Emily Wilcox and Katherine Mezur). She is currently working on her first monograph on performing blackness and its racial politics in contemporary South Korea. Soo Ryon Yoon received her PhD in Performance Studies from Northwestern University and was a postdoctoral associate in the Council on East Asian Studies at Yale University.