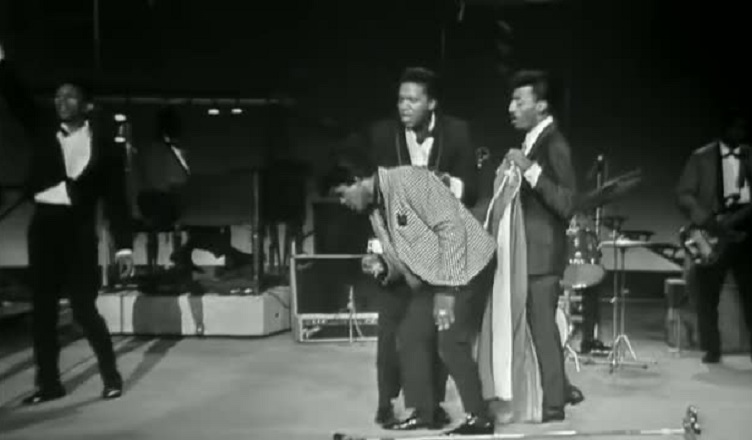 James Brown embodied the concept of black resilience that the word “soul” came to denote in the 1960s. But he also exposed the perpetual need for black resilience as a crisis. The self-described “Godfather of Soul” had picked cotton, shined shoes, and danced for spare change as a kid growing up in Augusta, Georgia. By the late 1960s, The Amsterdam News would report that Brown owned “500-1,000 suits, 300 pairs of shoes,” several impressive cars, a “Victorian Castle in Queens, New York,” an 85-person production company, and two radio stations—one of which, WRDW in Augusta, he had once shined shoes in front of.1 A self-taught organist, drummer, and bassist who made himself a “human dynamo” in performance, Brown’s sense of having overcome had shaped him from birth.2 He often said he’d been “born dead.” He entered the world still and silent, until the resuscitations of his aunt Minnie brought him to life. “One good thing about believing you were born dead,” Brown’s biographer R. J. Smith quips, “is you come to feel nothing can kill you.” 3

Brown’s commitment to overcoming—defeating death, destitution, bodily limitation, all the haters—was manifest in his infamous work ethic. “I don’t mean to brag,” he noted of the James Brown Revue in 1966, “but we’re the only act that can and does work seven days a week, 365 days a year.”4 That’s what he meant when he called himself “the hardest working man in show business.” Instead of performing mastery as the illusion of ease, Philip Gourevitch notes, Brown “[made] the display of effort one of the most striking features of his art.”5 Just because he had overcome didn’t mean he could rest.

Brown staged his own labor and resilience most dramatically through his cape trick, which he developed around 1961 but first presented to the nation during his set at the televised T.A.M.I. (Teenage Awards Music International) Show in 1964.6 His reputation among black fans was secure but his crossover potential was yet untested when he joined the star-studded line-up of artists (the Beach Boys, Marvin Gaye, the Supremes) playing for a studio audience of screaming white teens. Still, Brown was confident enough to insist that his group perform last.7 Instead, they were followed by show-closers the Rolling Stones, in what Mick Jagger would call the biggest mistake of his life.

Toward the end of their set, Brown and the Famous Flames do “Please Please Please,” a song that Brown wrote and arranged. Brown drops to his knees five times in  the course of this performance. After every fall, his announcer Danny Ray or one of the Flames drapes a cape over his shoulders and escorts him to the side of the stage, patting and fretting over him while Brown shakes his head with a mixture of submission and defiance. He allows himself to be managed for a moment before flinging his cape off again and returning to center stage to resume his screaming, struggling, and pleading:

Brown repeats the rise-and-fall routine with variations. After the second time, he strips off his jacket to reveal a tightly tailored vest. Upon his fourth return to center stage, he collapses before he even gets to the mic, but then rises and sings “please” thirty-seven times while jogging in place before falling again. What is consistent, Smith observes, is that Brown always falls to the ground and throws off his cape on the downbeat of a given measure: from within his frenzy, he keeps conducting the band. 8 At one point, he sits down on the stage as if spent. “For a second I didn’t really know where I was,” he later admitted—and then starts dancing again. 9

Brown was a gospel devotee whose musical education had begun in the church, and he described the cape trick as “a Holiness feeling—like a Baptist thing.”10 The cape was both a sartorial nod to black preachers like King Louis Narcisse and Brother Joe May (and to the flamboyantly cloaked white wrestler Gorgeous George) and an expression of the Holiness belief in spirit possession.11 Smith is right to say that the “profound and wondrous force” by which Brown is possessed is “James Brown-ness, the intensity of being him.”12 But Smith is perhaps less justified in celebrating this condition, because what was central to “James Brown-ness,” at least in the 1960s, was Brown’s determination to outdo the competition and kill it every time13—even when that meant almost killing himself. He often danced so hard that he needed to be replenished via IV once off stage. During a weeklong run at the Apollo Theater in 1966, he collapsed twice due to overwork (“Many thought it part of his act,” one reporter noted).14 Behind Brown’s own labor was that of his 40-person entourage—stagehands, personal attendants, women singers, and a 20-member orchestra that Brown ran “like an infantry platoon,” levying fines for such offenses as lateness ($100), drinking on the job ($50) and failing to shine one’s shoes ($25).15 In this way and others, he exerted an extraordinary degree of control over his own musical practice and product. The racial politics of that power grab were incontestable: “People of my origin hadn’t been allowed to get into the business end of show business before,” he notes in his 1986 memoir, “just the show part.”16 Still, it could seem, in the words of 1965 Ebony profile, that Brown’s “passion to succeed almost borders on pathological.”17

Brown’s performance at the T.A.M.I. Show—presented at a moment when his star was still ascending but when, at age 31, he could not be called a very young man—testifies to the payoff of his work ethic and also to its costs. “I danced so hard [that night] my manager cried,” he said. “But I really had to… I was up against… pop artists—I was R&B. I had to show ‘em the difference, and believe me, it was hard.”18 In the 50 years since that iconic performance, critics have uniformly applauded the virtuosity and stamina Brown displays. But one might also see, in his endless process of rising and falling, not only an exemplary model of black resilience but also a meta-commentary on the excessive work required to “make it” in an industry built on black labor. Before long, Brown would innovate the form of his own music by making a single vamp the basis of an entire song—one could improvise on that vamp ad infinitum. This tactic, so foundational to funk, was a musical extension of Brown’s staged false endings: both suggested he could theoretically keep going forever.19 But again, the question he was begging, as surely as he was begging his lover “please please please” not to go, was: At what cost?

Emily J. Lordi is Associate Professor of English at Vanderbilt University and the author of three books: Black Resonance, Donny Hathaway Live, and The Meaning of Soul (forthcoming in 2020), from which this piece is excerpted.