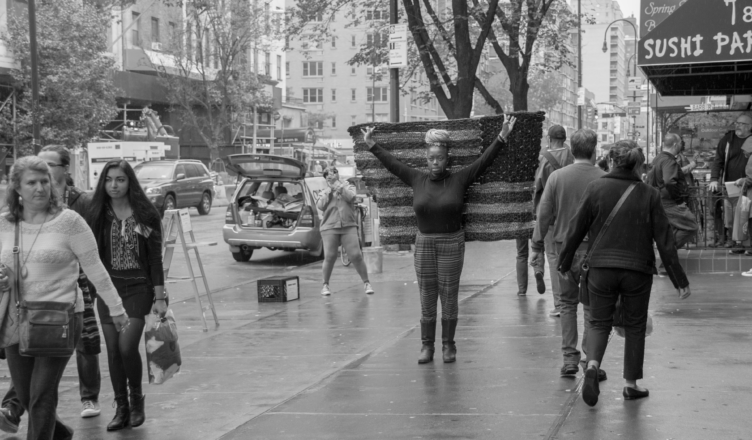 Wrapped in a U.S. flag woven from black, brown, and gray hair, she carried the weight of the unequal nation—one with a school-to-prison pipeline, often unpunished police brutality, and other forms of blatant and 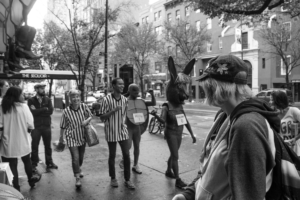 concealed racism. She extended her banner for all to see (featured image), climbed onto a stepladder, picked up a megaphone, and began, “I pledge allegiance to this flag that represents the unspoken, but not forgotten true story of this here United States of America. And to the Republic that has forgotten why it even stands, I want to remind you that we ARE one nation under your God and my God.” At some point a hare ran through the listeners congregating around the speaker. Shortly thereafter a tortoise lumbered through the same space (Fig. 2).

Such was part of the scene of this year’s annual Art in Odd Places (AiOP) festival, which ran from October 6–9, 2016 (Fig. 3). AiOP founder and director, Ed Woodham, began producing the festival in New York City in 2005. Since 2008 artists have displayed their art annually in unexpected places 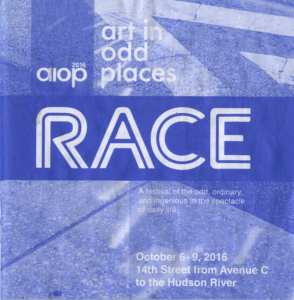 along 14th Street. They install temporary works and perform without permits, furthering AiOP’s mission to remind passersby that public spaces “function as the epicenter for diverse social interactions and the unfettered exchange of ideas.”

Curatorial assistant and artist Tasha Dougé organized the Speaker’s Corner between 7th and 8th Avenues, a new event to AiOP modeled on London’s similar forum. Saturday afternoon festival artists and other members of the public took turns speaking from ladders and milk crates. It was from this space that Dougé delivered her “A New Pledge” while bearing her flag, “Justice.” And it was through the Speaker’s Corner that The Big Head Brigade’s papier-mâché tortoise and hare—the “Hillatortoise” and the Big Head Hair “Thump”—ran. Both art projects fit under AiOP’s theme for 2016, RACE.

This year’s curators, Elissa Blount-Moorhead, Rylee Eterginoso, Tumelo Mosaka, and Ikechukwu Onyewuenyi, asked artists to engage race according to: Who? What? Where? When? How? “Race” carries many meanings, such as the socially-constructed categories attached to skin colors, the presidential race of election season, and a foot race. Yet none of these are mutually exclusive. In addition to the ongoing strength of AiOP’s ability to generate conversations between strangers, projects in the 2016 festival demonstrated how the intertwining meanings of race can give form to new artistic projects and means of protest.

Many of this year’s projects explicitly called out racialized power and racism. As Dougé lugged around her flag, she talked to passersby about the real consequences that accompany prejudice and systematic racism. For Sense Us Census, Nicky Enright wore a sandwich board with the last U.S. census reproduced on it (Fig. 4). He asked willing participants how they identify according 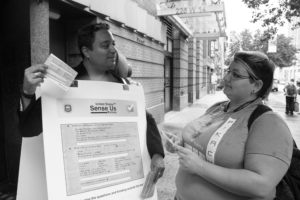 to the census’s categories and how they would like to be identified within the category of “some other race.” Answers to the latter ranged from official census designations to “human,” “untitled,” and “pizza eater,” thus highlighting the never-ending possibilities of such labels. But all “official” categories have a history, and Enright invites us to consider the ridiculousness and use of the current census designations as well as their broader implications in society.

Other artists drew on the then-upcoming presidential election, a race that carries immense repercussions for the future. The Big Head Brigade’s Hillary/tortoise raced Donald/(hair)hare, Sheryl Oring’s protestors carried messages from her project I Wish to Say, and Mike Richison invited participants to turn their “votes” 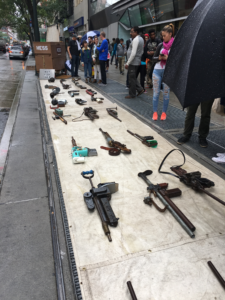 into drum beats and video loops of the candidates with his Video Voto Matic, an interactive voting booth. David Hess’s arresting Gun Show very successfully drew a crowd (Fig. 5). Working through the recent mass shootings in the United States, Hess began to fabricate guns from mundane objects. From a distance, his display suggests an arsenal that one could use to inflict an extreme amount of violence. Once closer, it becomes clear he made the guns out of machine parts, plastic toys, and other innocuous objects. Thinking about this project in terms of “race” draws to mind an “arms race.” More pressingly, the guns intertwine with control and the use of weapons for personal gain—often racialized and gendered—as well as the impact of the presidential race in terms of the policies that candidates may or may not adopt toward gun control.

Race is something we do, as historian Barbara Jeanne Fields argues in her essay “Slavery, Race and Ideology in the United States of America” (1990). Racism benefits some over others through using language, policymaking, constructing spaces, interacting with each other, and other actions. Under the guise of the festival’s theme, and AiOP’s broader encouragement of public exchanges, many thoughtful conversations about “race” took place between artists, festivalgoers, and the unexpecting public who happened to be on 14th Street.

As another example, Hjordis Linn-Blanford, the self-declared “Angry Lady,” took to the Speaker’s Corner where she yelled at white people to wake up, examine their own personal networks, and call out racism when they see it; racism is not a problem for people of color to solve (Fig. 6). 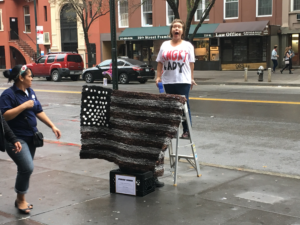 She also criticized so-called liberal organizations that tout equality yet populate their staff and board with a majority of white people. When she jumped down from the corner’s stepladder, she began to talk to white people walking by. In one instance she tried to talk to two white women, who attempted to avoid her by apologizing that they were in a hurry. The Angry Lady strode alongside them, not allowing the conversation to end. She responded to their hurried dismissal by telling them, “I’m walking with you, and I can keep up.” Back at the Speaker’s Corner, she realized that anger does not always encourage people to converse. She put her coat on to cover the handwritten words “Angry Lady” on her t-shirt and continued to approach passersby, albeit more calmly. But the Angry Lady was not an artist curated into the NYC festival. Linn-Blanford participated because she had something to say in her larger aim of combating discrimination and racism. Part of the power of AiOP is how it activates a range of participants during the festival and, hopefully, beyond.

The above descriptions provide only a sample of the over thirty artists and collaborators who answered AiOP’s call to address questions of race. When attending the festival any year, it is easy to miss some of the artworks. Some projects blur into the buzz of the city. Others are visible for a limited time or may move along the street and never cross a guest’s path. The 2016 festival weekend was also a rainy one, altering the time and duration of some of the artworks.  Even so, year after year the festival makes visitors to 14th Street look. It invites them to listen. And it hopes they will ask questions and converse. More specifically, AiOP 2016 proposed that if the United States is truly a nation that offers liberty and justice for all, then more of us need to engage meaningfully with race in various contexts. For as Dougé asks in the course of her pledge, “With our lives and stories so intertwined, how could we not be indivisible?”

Corey Dzenko is currently an Assistant Professor of Art History at Monmouth University. Her research interests include: contemporary art history and theory; histories and theories of photography and expanded/new media; art as an agent of social change; and ideologies of identity. She earned her Ph.D. in Art History from the University of New Mexico and was a Visiting Fellow at the University of Nottingham. Dzenko presents her work in various national and international conferences and has publications included in Men and Masculinities and Afterimage: The Journal of Media Arts and Cultural Criticism and is editing the forthcoming volume Contemporary Citizenship, Art, and Visual Culture: Making and Being Made (Routledge, January 2018).