For several decades, the mere mention of “penis envy” had the potential to rouse a great deal of feminist chagrin. Formulated by Freud across a few essays in his later work from the 1920s, the notion of penis envy appeared to draw an immutable connection between femininity and inferiority, thereby cementing a lamentable idea of the gender binary that grounded itself in anatomy. (How else to interpret Freud’s claim that the little girl beholds the penis of a sibling or friend as “strikingly visible and of large proportions” and “in a flash” perceives a sense of her own lack?)1 This moment in Freud becomes something of a primal scene for Mari Ruti. In the first paragraph of her new book Penis Envy and Other Bad Feelings, Ruti describes reading Freud in college; in her first encounter with the psychoanalyst, she promptly declares him “a fucking idiot” (ix ).

Having taught a number of undergraduate courses in Freud and psychoanalysis, I can confirm that such a reaction—shot through with bad feelings—is the dominant one from students in the classroom, many of whom would hesitate to declare themselves feminists in the first place. I wonder if they might be one possible readership for Ruti’s new work, which explicitly toes the line between academic and non-academic discourse. Could unpacking the shibboleth of penis envy from the supposedly diminishing world of psychoanalytic theory galvanize—indeed radicalize—a new generation of feminist readers? My sense is that Ruti’s Penis Envy might resonate particularly with young women who are caught up in the groundswell of the #metoo movement, and also set somewhat adrift by it. 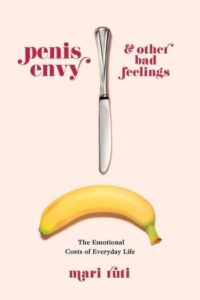 A few recent works by prominent scholars of critical theory and the contemporary—from Joan Copjec’s Imagine There’s No Woman (2002) to Sianne Ngai’s Ugly Feelings (2005)—have already revisited this particular Freudian formulation to think through the capacity of “envy” and other negative affects that are gendered feminine to puncture certain myths about the social order, especially those that gloss over structural forms of antagonism and conflict with optimistic fantasies of wholeness and integration. Ruti takes these ideas further by suggesting that the critique of this social order—an order driven by what she identifies as the neoliberal creed of “performance, productivity, self-improvement, and positivity”—cannot be the exclusive purview of so-called “radical” critics, many of whom benefit directly from neoliberal capital’s many conveniences, and are, incidentally, often male (xxxviii.). Rather, the arguments in Penis Envy dwell in another space: that of ambivalence, another crucial affective mode for Freud. They scrutinize the everyday, in which the toll of neoliberal capitalism together with heteropatriachy is often acutely felt but often barely measurable. Here Penis Envy builds on the canonical work of Lauren Berlant in Cruel Optimism (2011), which describes the affective responses and forms of adjustment—often feelings of personal failure and disappointment—that are the result of the shattering of post-war fantasies of the “good life” and upward mobility in the United States.

Berlant and Ruti, in separate, but often intersecting ways, have both repeatedly pointed out that there is nowhere we are less free to act outside of the neoliberal paradigm than in our intimate lives. It is here that Ruti’s Penis Envy turns the bulk of its attention, analyzing the ways in which our ideas about dating, romance, and marriage continue to be thoroughly constrained by a heteropatriarchal notion of gender as biologically innate, and by a neoliberal capitalist injunction to “enjoy” the proliferation of choice at the expense of meaningful and equitable connections that might not fit into socially sanctioned models. For Ruti, who grew up in rural poverty on the border between Finland and the former Soviet Union, American culture manifests a specific kind of gender fanaticism puzzling to those not thoroughly grounded in its values. She describes “an obsessive, even pathological concern with making sure that men and women remain discernibly different” (67).  This “gender obsessive disorder” operates, as she explains in her chapters, in diverging ways. In “The Rationalization of Intimacy,” Ruti deconstructs the continuing, even intensifying hold that marriage and the couple form have on gendered ideals of success and happiness, “insofar as romantic fulfillment seems to depend on performing one’s gender correctly” (96).  Under such persistent heteropatrarchical ideologies, all those forms of existence that fall outside of the couple form and its concurrent logic of gender binarism are subject to a range of hostilities, from the seemingly benign to the acutely harmful; Ruti names everything from the violent policing of trans bodies to the lucrative self-help industry directed at solving the “plight” of single women. Failure is not an option, as “an intensification of levelheaded rationalism” (34) presides over the search for love and intimacy. If neoliberal efficiency mandates that we ignore our vulnerabilities in order to work smarter, better, and longer (without adequate parental leave, sick leave, or allowances for mental health), why not expand this logic into our romantic lives, building more intelligent algorithms for dating apps, encouraging women’s continued emotional labor in relationships (otherwise known as “leaning in”), and disavowing the bad feelings that accrue when this logic inevitably unravels at the seams?

Many of the ideas about gender and relationality in Penis Envy will be familiar to readers of canonical texts by contemporary thinkers and writers, including Ruti’s own. In The Summons of Love (2011), for example, Ruti writes about the pitfalls of attempting to control and manage desire in order to yield enduring fulfillment and happiness, something that, according to Lacanian psychoanalysis (her main theoretical framework) cannot be managed at all. On the subject of gender as an ideological tool, Judith Butler famously articulated that being “hailed” (in Althussurian terms) into gender begins the moment someone exclaims, “it’s a girl!” to a newborn.2 In Future Sex (2016), Emily DeWitt writes about feeling unmoored by being single and in her 30s, left out of the marriage plot that buttresses the neoliberal fantasy of a good life. The book charts her encounters with multiple forms of “free sex,” finding that sexual diversity is still very much constrained by a gender hierarchy. But unlike Ruti, DeWitt finds consumer capital’s co-opting of sexual “choice” as tentatively enabling as much as it might be troubling. For DeWitt, who ventures deep into the world of internet porn, for example, such easily accessible forms of sexual fantasy are not going anywhere, so she argues that feminists might as well intervene and learn to enjoy them on our own terms.3 By contrast, for Ruti, heteroporn (rather than queer pornography) has become an unassailable element of the banality of evil that characterizes our current misogynistic culture, all the more insidious because it has foreclosed avenues for sex-positive feminist critique.

In her chapter on heteroporn, Ruti writes that the denigration of women under heteropatriarchy—and the subsequent impossibility of challenging the latter on a broad scale—is largely because women have been “taught to erotize, to take pleasure in, their own objectification” (111). In the introduction to the Second Sex, Simone de Beauvoir put it another way, suggesting that women could never collectivize because they had no shared history. Yet the fact remains that the ease of one’s seduction by heteropatriarchy depends on a number of factors, including racial difference. While Ruti often writes from a personal and non-academic angle, taking care not to inundate her prose with multiple citations, the lack of citational attention to women of color feminists who have already understood “sexism and racism as intertwined problems” (74) was surprising. Here is Audre Lorde, for instance, from “Age, Race, Class, and Sex” (1984):

It is easier once again for white women to believe the dangerous fantasy that if you are good enough, pretty enough, sweet enough, quiet enough, teach the children to behave, hate the right people, and marry the right men, then you will be allowed to co-exist with patriarchy in relative peace, at least until a man needs your job or the neighborhood rapist happens along.4

It is particularly frustrating that an insight such as this one, which powerfully diagnoses our cultural moment (and any of its lingering claims to a “postfeminist” age), does not find itself anywhere in Ruti’s book. Lorde is one of the preeminent thinkers of the texture of lived experience, and her work considers the scale of racist and heterosexist oppression as it manifests at the level of thinking and feeling. In Living a Feminist Life (2017), Sarah Ahmed writes about the ability of Lorde and other women of color feminists to lucidly combine the theoretical with the personal. She suggests that Lorde and many others write prose that is “animated by the everyday: the detail of an encounter, an incident, a happening, flashing like insight.”5 I suspect that this is what Ruti is attempting in Penis Envy, which moves between trenchant Foucauldian and Lacanian arguments and the narrative of her childhood and consequent professional life. Some more engagement, therefore, with the broader genealogy of autotheory beyond white authors such as Maggie Nelson and Roland Barthes, who are given more explicit attention in the book, is warranted here; Christina Sharpe’s In the Wake (2016), for instance, is an excellent example of a recent work that examines the theoretical potency of embodied experience.

As is always the case in her books, the strength of Ruti’s analysis is grounded in her readings of Lacan, here, his seminar on “Anxiety” from 1962-1963. The seminar involves an extended commentary on phallic detumescence: the failure of the penis to perform at the moment it is meant to triumphantly do so. Detumescence reveals something crucial about the symbolic order staked on phallic wholeness: this order itself is lacking, and is grounded in an idea of power that, in Lacan’s reading, is very much a ruse, a “falling-away” from anatomical or biological consistency.6 What the little girl in Freud’s text perceived was merely the false spectacle of phallic mastery, and the inevitable disenchantment that follows from realizing that all subjects in psychoanalysis must contend with their own partiality. Some bad feelings are produced by a neoliberal order rigged against most of us who aren’t white, straight, rich, and male. Others are inevitably what make us human, becoming the grounds for our creative sustenance, and our singularity. What remains, in Ruti’s account, is thus not necessarily comforting, nor even entirely hopeful. But it is inquisitive, complex, and stubbornly livable.

Ronjaunee Chatterjee is a limited-term Assistant Professor in the department of English at Concordia University, where she works at the intersection of Victorian Studies, Feminist, Gender, and Sexuality studies, Continental Philosophy, and Psychoanalysis. Her work has been published in Victorian Literature and Culture, French Studies, Comparative Literature Studies, The New Inquiry, and the Los Angeles Review of Books.