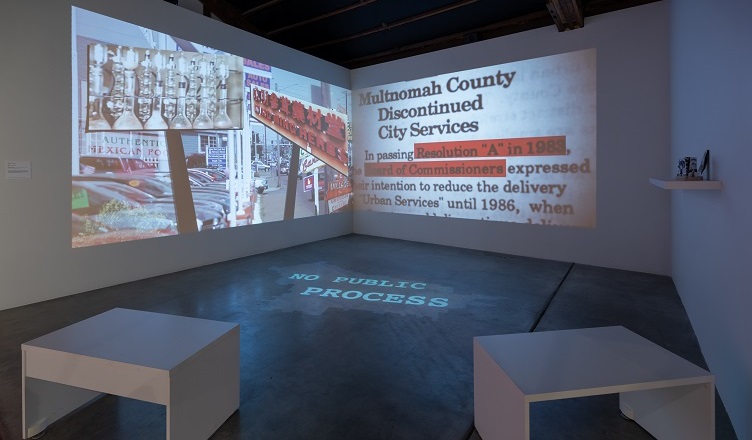 Outside Disjecta—the one-story capacious venue housing the 2019 Portland Biennial—three middle-school aged children sit at a table covered in black cloth. Each wears sunglasses and a hooded sweatshirt. Behind them, a painted backdrop depicts a purple and blue sky with white clouds. On the table in front of each child, service bells sit. Nearby, two adults dressed in black sit facing each other on folding chairs, separated by a musical harp.

A foot away is a public sidewalk, and across the road is the Kenton/N. Denver Ave public transit light-rail stop. When someone or something—a pedestrian, car, or commuter train—passes by, the five instrumentalists sonically animate this collective location. Succinct bell chimes and harp strums accompany walkers and vehicles in transit. An extended harp and bell crescendo emphasize a chiming light-rail train entering the station. Beyond these sounds are those in the external environment: the wave-like “shush” of constant cars passing by, the “vroom” of car engines, the faint patter of footsteps, the amused laughs of audience members. The stationary musicians and audience contrast with how other sonic producers—pedestrians, cars, trains—are on the move.

This event was a “performance by Biennial artist Lou Watson with Finnian Peck and [students from] the Harriet Tubman Curatorial Project, creating a live musical score of Kenton commuter traffic along N Interstate Avenue” (Disjecta). Watson is a UK-born, Portland, Oregon-based artist who musically scores external environments. Here, working with collaborators, Watson produced ways to intimately hear sonic subtleties immediately outside Disjecta. Inside, Watson’s work was among that of eighteen Oregon-based artists displayed as part of the Biennial.

Curated by Yaelle S. Amir, Elisheba Johnson, and Ashley Stull Meyers, the 2019 Portland Biennial centered this presence, immersion, and intimacy with Oregon’s people, spaces, histories, and aesthetics. It did so, boldly, through sustained attention to the state’s longer history with and current practices of colonizing indigenous land, legally excluding black people, and systemically decentering marginalized populations. Biennial language articulates how the “exhibition . . . focus[ed] on the nuanced thematics of site, diaspora, and the multifaceted histories of the region as told in eighteen projects. These gestures . . . address the continuous migration and erasure of communities from the Oregon landscape and, in some cases, serve as an act of preservation and remembrance for their stories.” When I attended in September 2019, the curation oriented my senses to carefully attend to the particularities of colonialism and racism in Oregon, and to decolonial means to differently remember, imagine, and center decentered and dispossessed people.

Mid-way through my time inside Disjecta, I found myself seated on a black tufted coach. Immediately in front of me was an abstract map hovering horizontally on a coffee table, titled, “Black Life & Black Spatial Imaginaries Glimpses Across Time & Space.” Across the mostly white poster-like map, two somewhat parallel darker lines snaked vertically. On the left, one skinny line ran north-south, and seemingly represented the U.S. West Coast or I-5, the interstate highway that runs through California, Oregon, and Washington State. Near the right side, another thin vertical line meandered mostly southward, representing the flow of the Mississippi River. Across these lines sat encircled pops of color. In one circle, a vertical block of a hazy purple, blue, and clay highlighted an image of a cotton field. In others, sets of blue and orange, and pink and yellow highlighted West Coast landscapes and black people therein.

This map exists among a triptych by Sharita Towne, a Portland-based artist. On the floor under the map sat a second work, “5th St. Imaginary: a Family, a Geography.”

Black and gold aesthetically defined Towne’s third piece: a delicate and regal book that rested upon a table off the sofa’s right edge. The book’s black cover included the word “Alluvium” in gold; “alluvium,” according to the New Oxford American Dictionary, means “a deposit of clay, silt, sand, and gravel left by flowing streams in a river valley or delta, typically producing fertile soil.” As I to thumbed through the book, I found bright yellow and white pages with gold and black lettering. The book’s content includes a “visual bibliography” with essays on black geographies by seven theorists including Alexis Pauline Gumbs, Derrais Carter, and Katherine McKittrick. The bold, colorful, collaborative, and thoughtful book features produced a craft-like engagement, as the book looks and feels and read like a precious gift.

Towne’s works invited absorbing the map with closeness and inquiry; sitting with and intimately watching and listening to a black family on home video, and reading a precious book with attention. Her work made space for careful and intimate engagement with black geographies, families, theorizations, and space.

First hosted by the Portland Art Museum as the annual the Oregon Biennial, that event ran at the museum until 2006. Since 2010, the Portland Biennial has taken place at Disjecta, a contemporary arts space that occupies an immense 12,000 square foot space formerly operating as a bowling alley. According to Disjecta’s website, the Portland Biennial now functions as a “survey of works by visual and performing artists who are defining and advancing Oregon’s contemporary art landscape.” What made the 2019 Portland Biennial particularly immersive were the ways in which the curators staged subtle dialogues among the eighteen artists.

As I sat on the couch as part of Towne’s exhibition, I overheard music, noises, and voices from a nearby installation. After departing Towne’s, I wondered leftwards where I found two video images projected onto cornered walls. At one moment, images of trees situated next to a paved road filled the space. Suddenly, a third projection appeared, this time on the floor. It illuminated an illustration of Portland’s 1845 geography. Depicted in blue, the Columbia and Willamette Rivers, while the thirty-six square blocks that make up the city then and straddle the Willamette River, are outlined in red.

This is Sabrina Haque’s installation “Sign of the Times,” which engaged histories of spatialized racism, displacement, and gentrification in Portland. Starting in the 1840s, the Oregon legislature enacted the black exclusion laws, which forced the expulsion and barred the entrance of blacks into the state. Haque’s three-channel projections (two on the corner walls, one of the floor) provide a timeline of these racist laws and actions of the state and city. Subsequent projections depict Japanese-American farmers (many of whom were later interned in the 1940s) owning land in early twentieth-century Portland, and images of Harvey Garnett, standing in front of his Alberta Rose Theater, Portland’s only black-owned theater; these later wall images cascade in dialogue with a floor projection about black Portland families forcibly removed with the construction of the sports coliseum and Interstate highway.

On the wall opposite the projections are rows of black and white pamphlets titled “Portland: A Connected Community.” This idea of connection permeated the experience of the projections. When I stood closer to the walls to observe details, the projections meant for the floor hit my body, immersing my presence in the exhibition’s light, images, and sounds. As such, Haque’s multiple-video installation made space for immersion into and presence with how racist laws and practices have spatialized Portland, and racialized people.

Earlier, I had stood with Sara Siestreem’s installation. Siestreem is of the Hanis Coos people, whose land exists on what is now the Southwestern Oregon Coast. A collection indigenous objects defined this installation, including woven baskets and dance caps, a dance apron made of oyster shells and glass beads, and dance shoes made of glass beads and deer hides. These objects surround an image of a poster that reads “STOP TCP (Traditional Cultural Property) Historic District.” Siestreem’s artist statement explains how the poster is the work of the Coos Bay Concerned Property Alliance, a group of settler colonial homeowners who are seeking to stop indigenous projection of the land. “Coos children see these signs a hundred times a day on their way to school,” Siestreem wrote, “and as they interact with the land preserving and enjoying their cultural lifeways and inheritance.” This installation flips that engagement by inundating the viewer with indigenous objects and sensorium while decentering and denormalizing the ways in which indigenous land in Oregon continues to be colonized and disrupted.

Across the 2019 Portland Biennial, I listened to harps and bells animate quotidian movement of people and things, I sat carefully with black geographies, I stood visually and sonically immersed in the racialized histories of Oregon, and I—through the work of the artists and curators—centered decentered indigenous objects, land, and people. I immersed in this version of Portland, Oregon, where anti-racist, decolonial care afforded a sensorial space to imagine with these artists and their worlds.

A correction was published on May 5, 2020. The text now reads: “There, an enlarged tablet screen played looping home videos, featuring a black Salem,OR-based family. In one moment, adults and children sit outside their home enjoying a barbeque. (Towne’s family migrated from Arizona cotton fields, by way of Arkansas and Mississippi to Salem, OR.)”

Jasmine Jamillah Mahmoud is a performance historian who writes about black aesthetics, contemporary performance, feminist/queer of color critique, cultural policy, and urbanism. Her writing appears in Hyperallergic, the Journal of Urban Cultural Studies blog, and The Arts Politic, a magazine she co-founded. She is currently an Assistant Professor in Arts Leadership program at Seattle University.