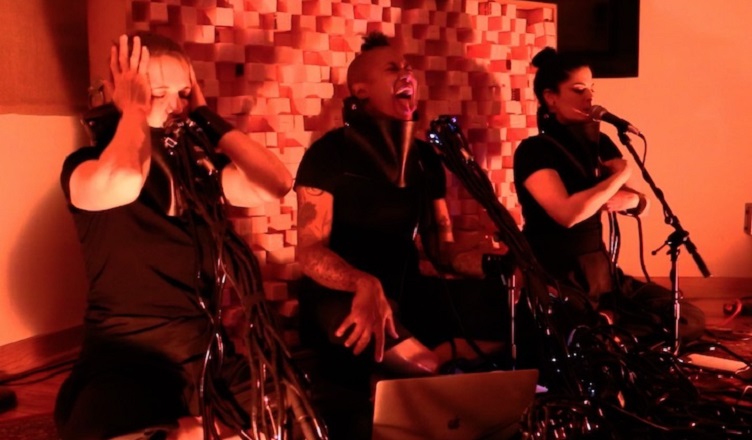 In a conceptually jarring two-week period in December 2017, I saw Trevor Paglen’s exhibition Invisible Images at Metro Pictures in New York City and L[3]^2’s [Lee Blalock] sy5z3n_2: Ohm/Respiration For Guided Medi(a)tation at the Experimental Sound Studio in Chicago. I had been thinking about images, mediation, and agency—particularly of the limits of human control over signification in computational art—and these two works seemed to suggest both a crisis precipitated by artificial intelligence and possible strategies for palliative interventions.

L[3]^2 and two collaborators, who she terms “behaviorists,” brought together microphone-amplified breath, voice, and chant with touch and motion-activated inputs and a computer-generated soundtrack to choreograph synthesized sound and human voice, all in unison. The performance was scored in four parts: 1. emptying the old breath, 2. filling the void / overwriting the world with noise, 3. reorganization / integration, and 4. meditation / mantra. In each sequence, the performers synchronously shout, chant, and hum, all while activating the inputs and outputs that link up with the central computer hub. Taking as a given the condition and theories of the posthuman, L[3]^2 has moved to testing the boundaries of flesh and code, voice/breath and amplified noise.

Meditation is rarely considered a technology, but has in recent years been taken up by corporate America to increase productivity and worker satisfaction. Like yoga as it entered the capitalist West, it has become a fully instrumentalized technique meant to give the illusion of control to those beleaguered workers, pairing it with “wellness” programs offered by insurance companies and enhanced with biotrackers and monetary incentives. This is not just a cynical point of view I’m narrating, but more to say that I found it daring that L[3]^2 engaged an almost clichéd imagery of meditation, down to the cross-legged pose and ohm fingers. It seemed to me to argue that the technological apparatus with which she works is a process of adapting one’s body to (cultural, technological, urban) shock. L[3]^2’s work connects the “newest” media with ancient goals of mediation, which is to incorporate otherness—whether societal, sonic, visual, or otherwise—and recontextualize/normalize it within the organism. L[3]^2 states simply: “sy5z3n_2 was written to illustrate a different model of finding peace.”1 L[3]^2’s work tests the capacity of the human organism to integrate excessive signal and noise, while also testing the capacity of the body to signify under such conditions.

If we trace this issue of control through the development of cybernetics in the twentieth century, mediation was an aspect of cybernetic enthusiasts who understood computer and tech as “systems” that operate like a human organism. Of course, the most famous book of this genre is The Human Use of Human Beings (1950) by Norbert Weiner. More recent theories of incorporating foreign technology into the human organism include N. Katherine Hayle’s work, which L[3]^2 has closely studied. L[3]^2 has been drawn to these writings under the guise of a character ill-fitted for contemporary life and her performances are designed with a personal aim of breaking the performance of the “everyday” in her own life. But there was something slightly menacing about the performance that resisted the “peace” in her stated goal. Or, rather, it was a resistance to the outdated mechanisms of humanism that are undermined by computational tech—hers is, in other words, a posthumanism that rejects tenets of humanism like identity and sovereignty.

The action-based and superficial aspects of sy5z3n_2 are held in balance with a classical humanist model of interiority suggested by the image of the Buddhist meditation pose. But the inwardness suggested by meditation is undermined by sy5z3n_2’s penetration of the proximal underneath of the skin made exterior by transductive capacitors embedded in the neck and wrist cuffs. The sensors’ residence on the surface of the skin, in fact, is something that L[3]^2 hopes to overcome in future work with implants.4 Meant to penetrate beyond the interface of the skin, past the visual identifiers of race and gender and contour, the union of sensor and skin suggests a depth that is just beneath the surface, or that the body is a series of encounters. The skin is not a container, but one possible experience of the parameter of self. The proliferation of transducing and transcoding devices in sy5z3n_2 further demarcate this multiplied self, blending it into the masses and into other “data sets.”  Used to control futures and manage the present, these data sets suggest that beyond matters of privacy, there are entire selves beyond the physical and conceptual boundaries of the body. Data is both finite and infinite in ways that asks us to question the status of the object: above all, the fleshy human organism.

sy5z3n_2’s score mediates the performers as bodies and data: a distinction having to do with their status as either agent or evidence. This dual orientation, roughly corresponding to art and performance, is the hallmark of techno- and Afro-futurism, science fiction, and cybernetics generally. It raises the problem of the body-as-data that has only barely begun to be addressed in the realms of fine art. It is a question of the representational capacity of new technology and the conflicting orientations of design and art. Among other things, the reification of the subject continues to be the focus of much contemporary art, a late form of humanism largely abandoned in digital art. Among other things, the miscommunications between the mainstream and digital art worlds are caught up in the politics of representation, the history of how bodies are differently naturalized into representational technologies, and the narratives of resisting subject/object distinctions as a form of “creativity.” L[3]^2 achieves this by employing the most basic media of signification, the exhaled breath, the primal speech act. The single artist is performed in unison with two lateral figures enacting a basic social relationship through transcoding, computation, and control.

The score is also a type of contract to align the interests of each of the three performers. The soft domination L[3]^2 plays as the writer of the score and keeper of the laptop data hub extends to her activating at times during the performance the touch-activated sensors on the other bodies, which in turn activate sound samples in the computer sound cards. L[3]^2 is the coder/designer; they—the behaviorists and the programs L[3]^2 authored—submit.  I was left wondering what my job was as the audience member. Was I being asked to submit? This ambiguity I felt is perhaps what separates L[3]^2’s work from “performance art,” as she often points out. Instead of this work studying the relationship between the audience and the performer, it studies the status of the performer. We are there to witness, but I’m not sure if we need to be.

Then, the presence of L[3]^2’s body is outside of the parameters of performance art and liveness, and rather more about the simultaneous acts of penetration via transducing and projection through amplified sound. She assembles an array of technologies, which, when applied to “real” bodies, are anti-essentialist in a way that bypasses the significant characteristics of bodies such as color, pallor, morph, and clothing: they penetrate and transcode. Visually, the excess continues through the network of wires that stream off of the performers’ bodies. This control over signification is, incidentally, solidified in L[3]^2’s choice to occupy the space of technology with her own body along with two other women. But her presence goes well beyond the assertion of her own representation as a woman of color in the white male world of tech. It is this very “significance” of the body of color that sy5z3n_2 tests, in that it posits a being-ness made up of both continuous and discontinuous wholes that continuously evolve. In fact, in encouraging sy5z3n_2 to be read as politically significant is like making a pact with the devil, which is the society that perpetuates the epidermal boundary as the medium between subjectivity and objectivity.

Perhaps L[3]^2’s undermining of the object is best explained by sy5z3n_2’s use of the ubiquitous software Max/MSP, one of the most valuable tools to handle sonic and visual data. Max/MSP facilitated performers’ use of computers live on stage, blurring the line between fixed and gestural media that had characterized electronic music since its electrification, or its synthesizing. The first all-digital computer controlled synthesizer was invented by Giuseppi di Giugno in 1976, which allowed for the control of individual instrumentation as well as the interactivity between devices, in what became not just a sound object based on a “real” sound that had been recorded, but that was instead totally virtual in its creation and interaction. Its later iteration, Max/MSP would refine users’ ability to handle packets of code using a graphical interface, thereby visualizing each input and essentially turning it into an “object.” One would manipulate the objects on the screen with either a mouse or a finger on a touch screen and move them around at will, listening to and watching the results in real time. This type of manipulability suspends a work like sy5z3n_2 between gestural performance art and computational art. Though coming from disparate genealogies, both of these realms of art address the problem of constrained agency.

Rather than understanding sy5z3n_2 as a metric of individual agency, we should think of it instead as providing a “sign of life” in the digital media, and one that does not rely on outdated and exclusionary modes of humanism. One of the reasons that Max/MSP has been so popular for musicians is that it enables gesture, thus mimicking authorial control. This mixture of gesture-as-liveness and Max/MSP’s remix of visual and sonic elements gives it particular valence in the art world. Representation is fraught with this quintessential “new media” platform of Max/MSP. Lev Manovich argued that traditional methods of art history are unable to account for new media art (for him, generally, computer-based art) because it has developed beyond the problem of the blurred line between art and design. He writes that “by foregrounding the importance of person-to-person telecommunication, and ‘tele’-cultural forms in general which do not produce any objects, new media forces us to reconsider the traditional equation between culture and objects.”5 His use of the term “object” is purposeful and references Alan Kay, the computer scientist and theorist who designed software related to Max/MSP. He asked the obvious question that his own programming would precipitate: “Is the computer a car to be driven or an essay to be written?”6 Addressing the status of a program as both/and aspects of representation, Kay concluded that “meta-mediums” (mediums that replicated other mediums) fluency meant working with content once form has been naturalized. sy5z3n_2, then, attempts to naturalize certain media conditions of everyday and social life when its unnaturalness is a collective anxiety reflected on in mass culture every day—a redundancy that has nearly rendered “true” content impossible.

It is precisely content that is difficult to parse with a work like sy5z3n_2, when the work is goal-oriented, procedural, or “behavioral” in addition to being sculptural and representational. L[3]^2’s other work has addressed this line between data’s performativity and its representation. In particular, her Neue An4t0_Me (2015) is a book that contains the the jpeg code of a microscopic image from her body. She changed part of the code to reflect her moniker L[3]^2, which would have the effect of glitching the jpeg and rendering it dysfunctional as an image.

Suggesting what Alfred North Whitehead called “occasions of experience,” the entity/“self” that is postulated in sy5z3n_2 does not find its demarcation in the boundary of the skin, but rather occludes it and uses it as one data interface among many. A streaming of data and concerted, significant pushback (the shouts, the exhalations) on the instrumentalization of the body, sy5z3n_2 postulates nothing less the the ability to control one’s own mechanism in the face of its further atomization.

Delinda Collier is Associate Professor of Art History, Theory, and Criticism at the School of the Art Institute of Chicago. She is the author of Repainting the Walls of Lunda: Information Colonialism and Angolan Art (2016) and completing a manuscript on the history of new media art in Africa.