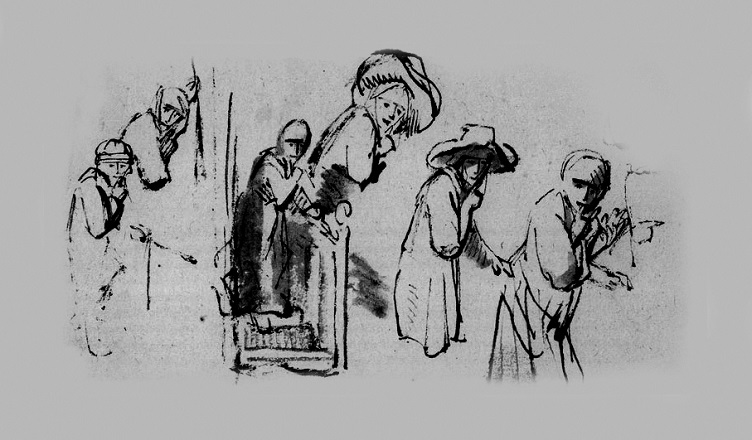 Stolen Voices is a long-term creative research project on the East Coast of the UK conducted through an expanded eavesdropping practice. Artist-researchers Johanna Linsley and Rebecca Collins have been working together since 2014, investigating the circumstances of an as-yet-unidentified event. The investigation has manifested in Bournemouth on the South Coast of Dorset, Felixstowe on the Suffolk Coast, Seaham on the coast of County Durham and Aberdeen on the East Coast of Scotland.

In each location where the investigation has taken place, we have collaborated with composers and sound artists. These collaborations happened on site and also via a series of dispatches from the field to our remote operatives. The results of this have been compiled into the first Stolen Voices album, presented here. We have also produced a limited vinyl edition, distributed solely at live events via a ‘conceptual raffle’.

It’s the UK in 2019: everyone knows there’s a crisis. But our ears on the ground tell us ‘crisis’ masks duration and complexity. So we begin with a sense that the sonic offers a way into crisis that will allow us to trace feelings and(/as?) facts. As sonic detectives, we give ourselves access to a range of conventions and styles that will help us sneak up on crisis, catch it off its guard.

A theatrical sensation. Ripples of shock and delight and gossip flood the surrounding area, radiating in concentric circles so we can follow their progress in reverse and find what we’re looking for. A centre. A start. An event.

The following tracks are offered here as clues or evidence of an ongoing investigation. We aren’t sure yet what there is to know or how much it will hurt to find out. We have been listening for a long time. We hope you will join us.

A car boot sale in a field overlooking the sea in the Northeast of England.

We drive past at nine o’clock in the morning and there are a few lorries. We drive past in the opposite direction at noon, and there are a hundred trestle tables set up in rows and a thousand people buying jigsaw puzzles and batteries and clothes and toys and perfumes and aftershaves and nail varnishes and e-cigarettes and VHS tapes and vinyl records and furniture and novelty ashtrays and groceries nearing their use-by dates. Other items whose relationships are difficult to discern. Not an arbitrary collection but one conditioned by economies, macro- and micro-, and regimes of taste and desire and local dynamics and personal histories.

The last time we drive by it’s four o’clock in the afternoon and there’s an empty field like nothing ever happened.

What is the difference between the arbitrary and the miscellaneous?

To answer this question we ask, too, what kinds of knowledge might be produced through eavesdropping: illicit, contingent, straddling public and private, troubling boundaries and borders, wrapped up with state and corporate surveillance, yes, but also with the minor, the domestic, the fleeting. Not easily categorised but not ineffable. Situated. Implicated.

Cast in the role of sonic detectives, we feel desire for revelation, for a puzzle to solve. The illusion of power that comes with exposure and there is always more to find out.

We track lobster suppliers on the Marine Stewardship Council website, noting which companies are certified, under assessment or withdrawn. We create prototypes for elaborate long-arm devices with extendable reach designed to pick up food from the centre of the dining table and deliver it to our plates, economising human effort and reducing the need to speak to each other. We model the early versions on grab-claw toy machines commonly found in amusement arcades. Not content with the result of our efforts, determined to find an effortless and silent system to pass the salt and pepper as well as any seasonal chutneys or condiments, we develop more complex gadgets. We take up cross-stitch and crochet, finding the time to add elegant borders to our Egyptian cotton hand towels and make a bespoke tea cosy for our Victorian china teapot.

Direct experience, what even is that?

We tune in to specific conversations, and then zoom out of meaning and syntax to ride on the aggregated noise.

We note this phenomenon and keep listening. As listening subjects, our attention is conditioned by the appearance of our bodies in space and time. On the other hand, we are investigating how perception exceeds the individual, how we might situate ourselves without subsuming phenomena to a singular subjectivity.

Then disintegration on a corporeal level, by tearing the body apart, becoming violent, unruly… even macabre. The use and mixture of gut acids, bile and bloody foam from the lungs. One of us stubs a toe on the way to the toilet and, due to significant blood loss, has to temporarily abandon the investigation.

We spend some months decoding seagull sounds but we can’t figure out if the beasts above us are issuing warnings or threats. We duck into a car park only to be assaulted by bagpipe music reverberating off cement pillars. It sounds alive and insistent so we search for its source among the Volkswagens and Toyota Camrys. A set of loudspeakers is installed in the far north corner of the structure. Below them, an actual dead crow, wings stretched, beak open as if in mid-cry.

In each strophe
A different bus route.
The references are limited – but yes
It is possible to get to Bournemouth
And to get back

Ode Aseguinolaza is a composer based on the Southwest Coast of France. Her journey from electro acoustic composition to classical and concrete music defines the direction of her creative space. Multidisciplinary performances allows her to explore artists’ respective worlds in interconnection with her own.

Barrett’s Dottled Beauty is what you get when you cross a Kitchen Cynic with a Pefkin. Nursing an obsession equally with Syd Barrett and Lepidoptera, Alan Davidson and Gayle Brogan formed this duo in 2016, playing semi-improvised experimental folk, informed by their shared interest in nature, folk song and noise.

Emma Bennett is an artist, theorist and teacher of performance. She is interested in speech as improvised tactic, as bad metaphor and flippant technology. Recent works have involved birdsong, chit-chat, soft furnishings and shouting. She has a PhD from Queen Mary University and works at the University of Leeds.

Kitchen Cynics is the vehicle for Alan Davidson, compulsive songwriter from Aberdeen. Alan packed in his job at an advanced age to concentrate on making music, much of which is inspired by the history and nature of North East Scotland. He has self-produced more than 100 albums, and has had music released on labels in Italy, Germany, Greece & the USA. The music itself veers from gentle (but often macabre) folk song to shards of looped noise.

Jan Mertens is a musician and sound designer from Ghent, Belgium. He is a former member of the bands Roses for Ashley and Archivist. His work has been heard at the Victoria & Albert Museum and the Wellcome Collection, among other venues.

Mariam Rezaei is an award winning composer, performer, improviser and DJ. She is director of TOPH, Gateshead and works with several groups, including Swarmfront, BLF, Wax Magnetic and MJ. She works predominantly with turntables, electronics, vocals and instrumental ensembles, with a number of works used in theatre and dance performances.  Notable commissions include BBC Proms 2013, Tectonics Oslo 2015, Glastonbury 2016, Tectonics Mosaic 2016, Counterflows 2017 and HCMF 2017.

Pete Stollery composes almost exclusively in the electroacoustic medium, particularly music using recorded sounds where there exists an interplay between the original “meaning” of sounds and sounds existing purely as sound itself, like a lump of clay ready to be shaped into something interesting. His music is performed and broadcast widely and is published by the Canadian label empreintes DIGITALes.

Stolen Voices is a collaboration between Rebecca Collins and Johanna Linsley, artists and researchers based in Edinburgh and Dundee, respectively. The project listens in on the East Coast of the UK. Results from the ongoing investigation have been shared throughout the UK and in the Netherlands, Spain, the USA and Brazil. This process of listening in involves exchanges with composers and sonic artists on site in Bournemouth, Felixstowe, Seaham (East Durham) and Aberdeen. Stolen Voices has received support from Arts Council England, Silver City Stories, the Live Art Development Agency, Snape Maltings, Sound & Music, SPILL Festival of Performance, Arts Bournemouth, Helix Arts, East Durham Creates, Aberdeen Performing Arts, University of Edinburgh, University of Aberdeen, University of Roehampton and Birkbeck, University of London.

The Stolen Voices album was mastered by Adam Matschulat of the Listening Tower with production consultation from Flora Pitrolo. The cover design is by Michael Ovaska, after a sketch by the 17th century Dutch painter Nicolaes Maes. We are very grateful to all three for their time, skill and listening.